For the first time in my life I saw an oceanarium in Kuala Lumpur. Then he really impressed me. It was very interesting to compare it with Bangkok, which is also considered one of the best.

The second time the impressions, of course, are not so strong, but still amazing. Stuck in front of some aquariums for ten minutes trying to take a photo. In addition, he was with the child, and not alone, he looked through his eyes. At Siam Ocean World, everything is done in such a way that even a small child will be interested.

The correct name for the SEA LIFE Bangkok Ocean World aquarium, but the name Siam Ocean World is encountered, which is outdated. In any case, you should know that there is only one oceanarium in Bangkok, you will not be confused.

Territory and maintenance of aquariums

We arrived on a weekend ... don't do this if you don't have e-tickets from Klook or from the site. The line was very long and went as far as the second floor. I don't know how long you can stand in it, half an hour or an hour. It's good that I bought tickets in advance and I didn't have to stand in it (more details about tickets and prices below).

In principle, in the hall there are many bright figures of marine life, designed to entertain the waiting people, you can take pictures with them and distract the child. There was also a man in a penguin costume who invited everyone to take a photo with him.. 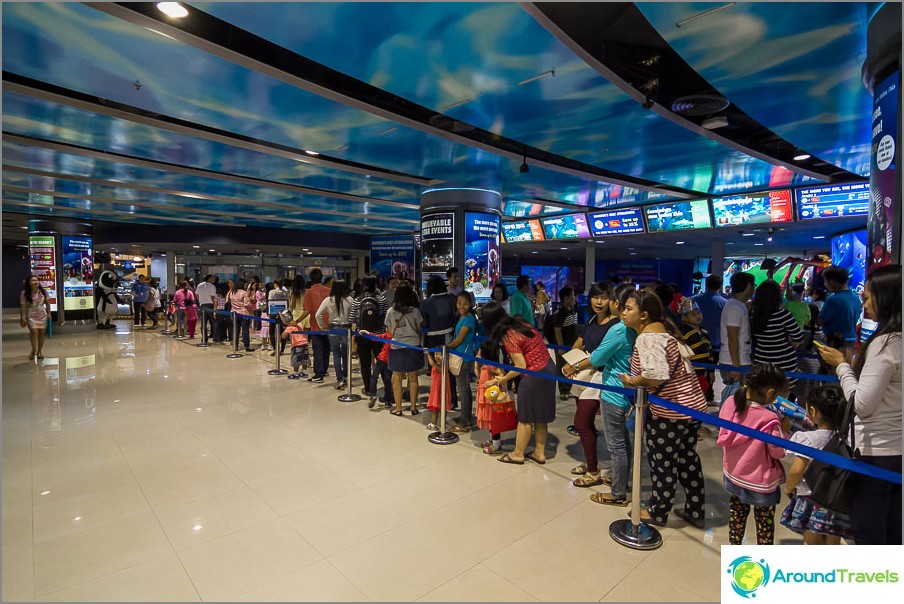 A huge queue, which then went to the second floor to the food court 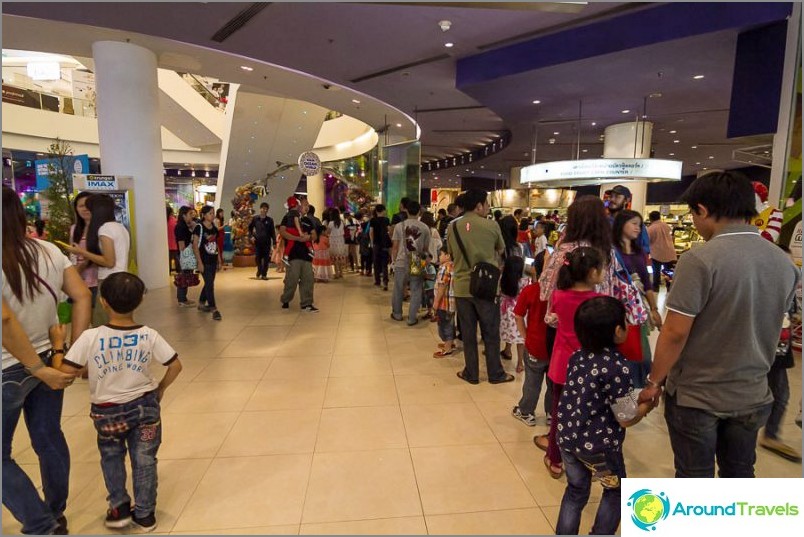 People are already crowding outside the aquarium in the food court

The entourage of the entire Oceanarium is very pleasing with its originality and diversity. Along the way, there are aquariums of various sizes and shapes, ranging from very small ones to large, round ones, so that you can go around it in a circle. It is convenient, especially when there are a lot of people - always somewhere, but there is a free place.

No less shocking is the very maintenance of the aquariums, starting from completely incomprehensible worms that either crawl out of the sand and stand in columns in the water, then again hide in it, and ending with huge crabs, I would even say crabs. I did not know that they grow to such a huge size! 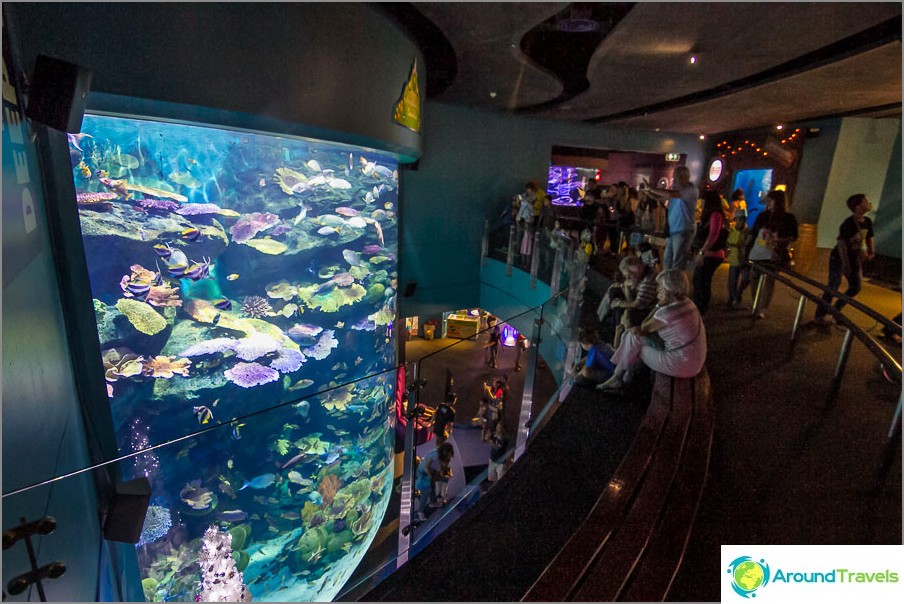 One of the huge aquariums with colorful fish 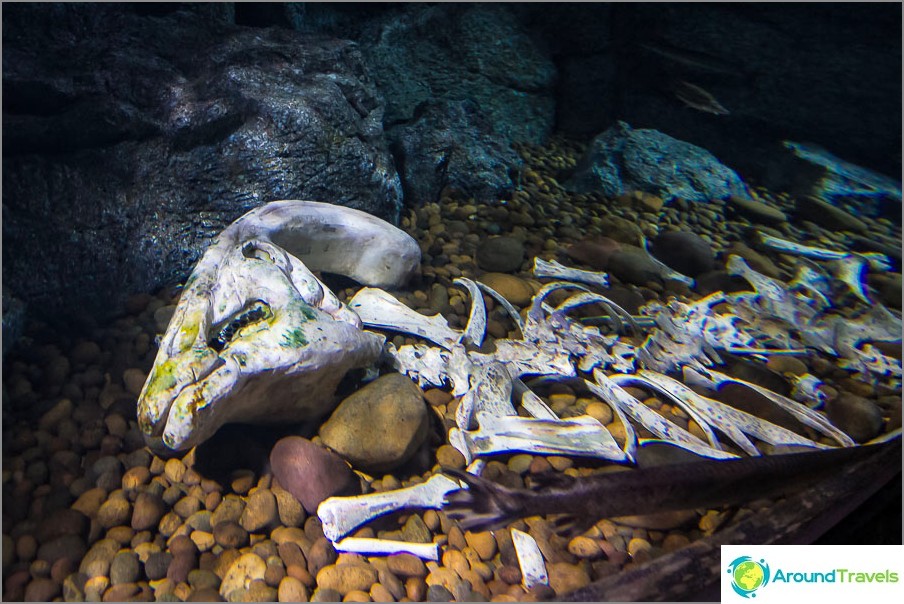 Strange installation in one of the aquariums 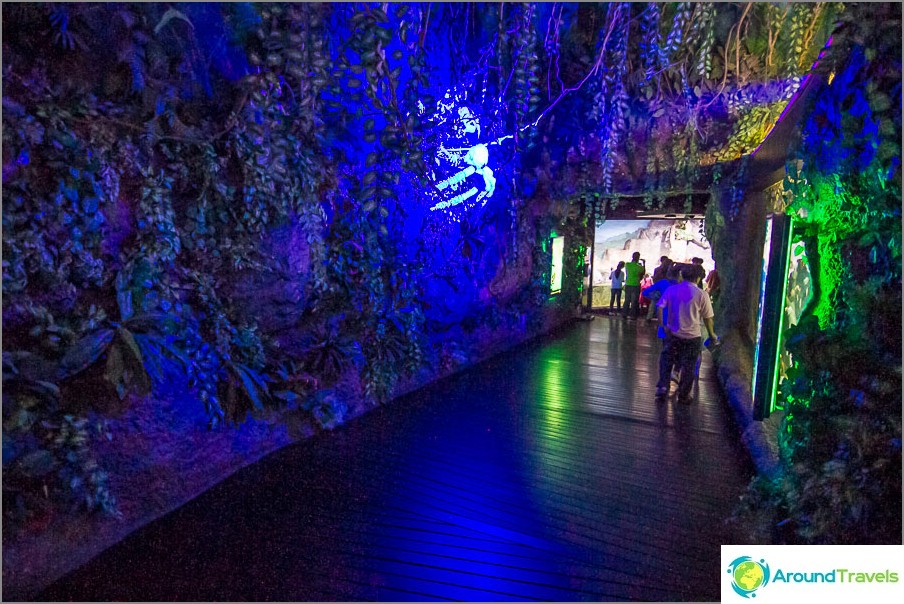 Cool surroundings under the dense jungle 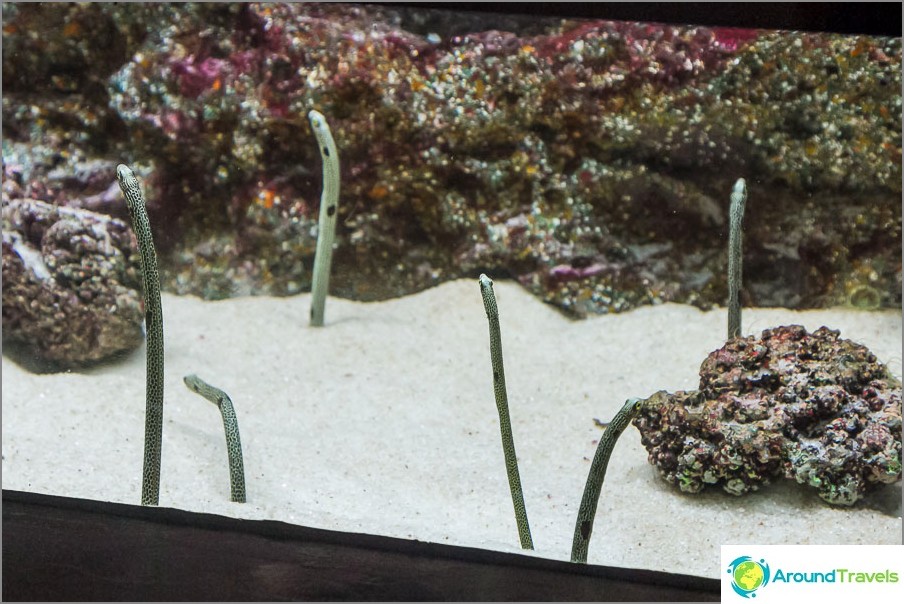 Incomprehensible worms that appeared from the sand, then again buried in it 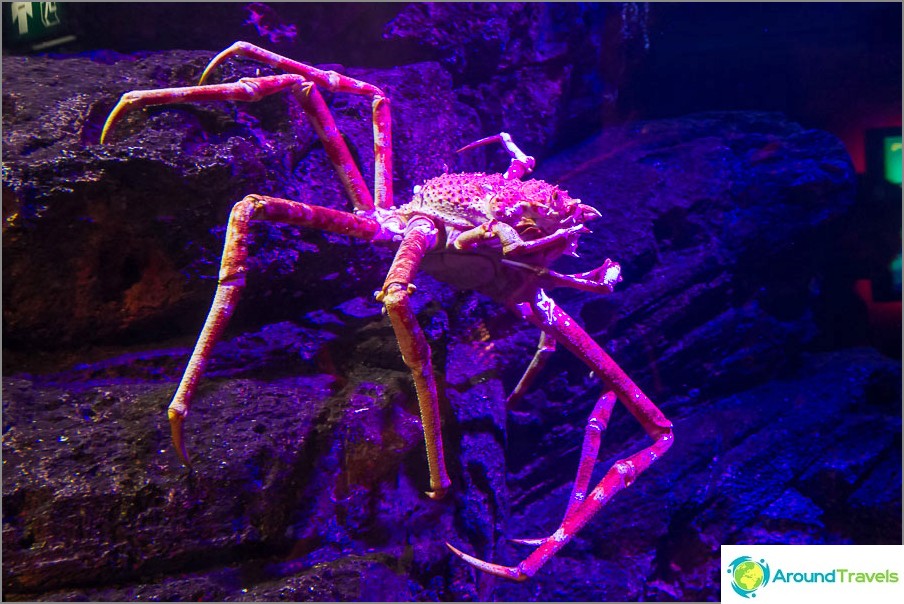 Huge crab, about the size of a human head 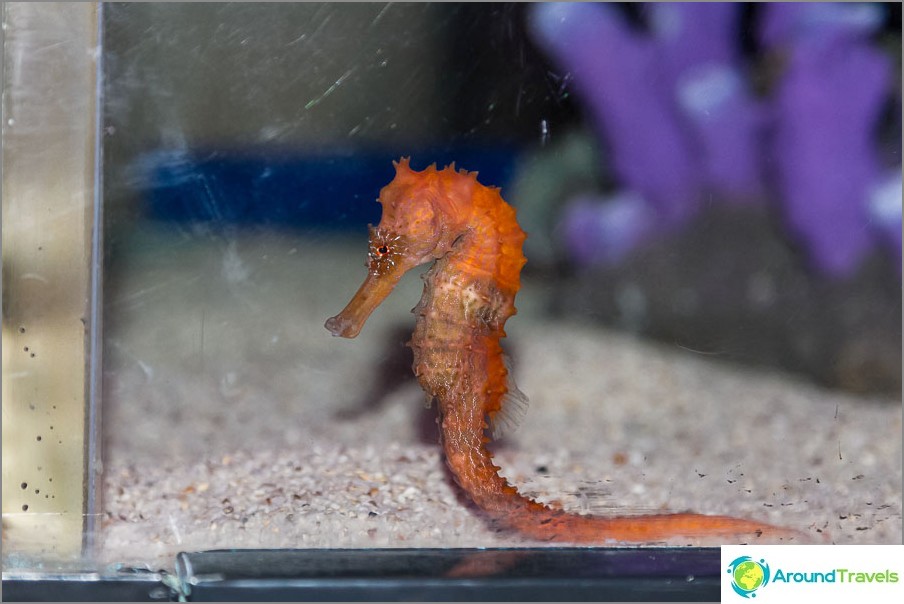 How much grace and grace in this tiny creature! 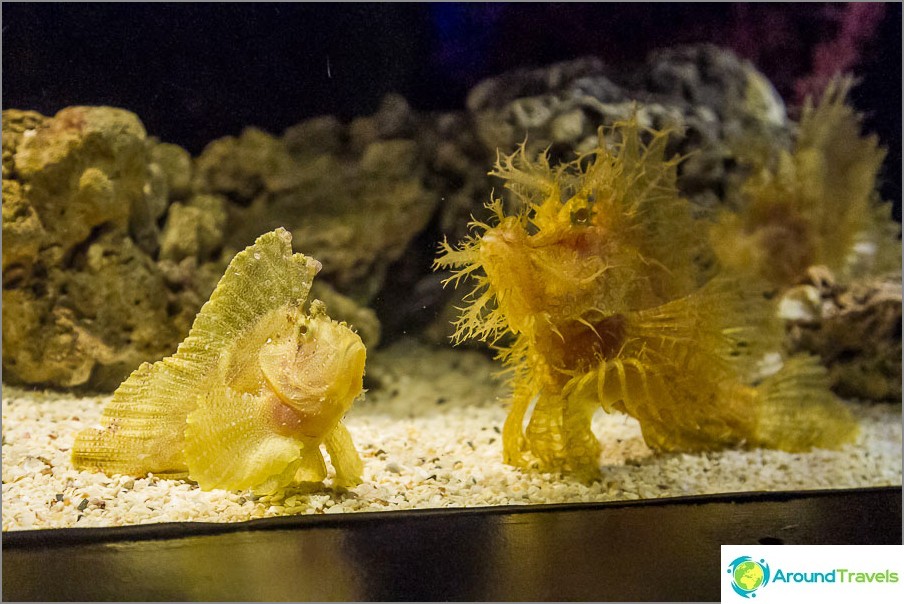 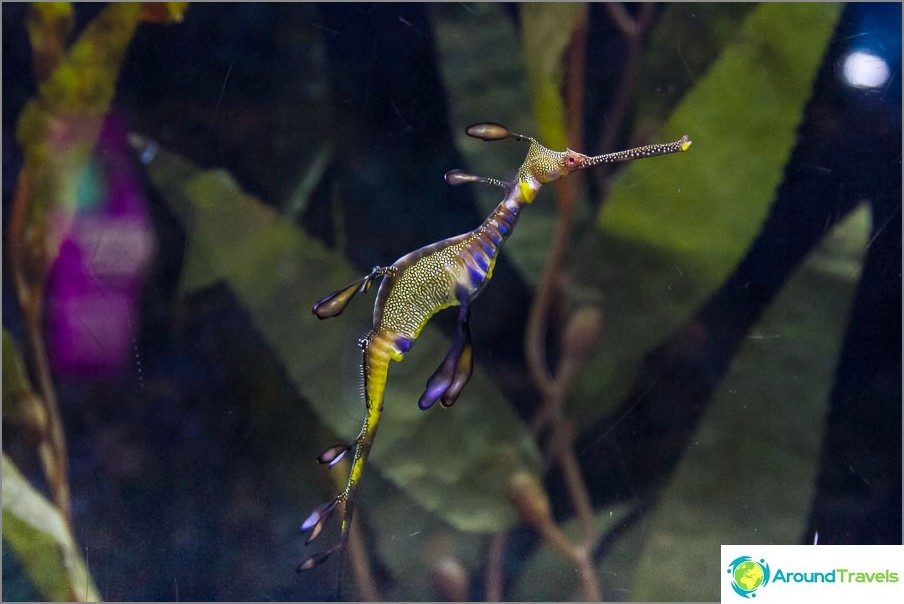 But it's great that there are many large aquariums with large, bright fish that slowly swim by, very close to the glass and you can see them very well. We stuck with such aquariums for a long time, and there were also several of them, and the fish are different everywhere, in general, there is something to see.

But we hardly saw fast otters (or what are these nimble waterfowl animals called there?). Firstly, because they were very popular with other children and their aquarium was literally covered with children of different ages, so also the animals themselves moved so quickly that I did not have time to show them to the child.

It was somehow easier with the penguins, they swim, of course, too quickly, but they walk along the land in a great casual manner. Moreover, apparently, the feeding time was approaching and they literally crowded around the glass and clustered around each new visitor, allowing themselves to be examined. 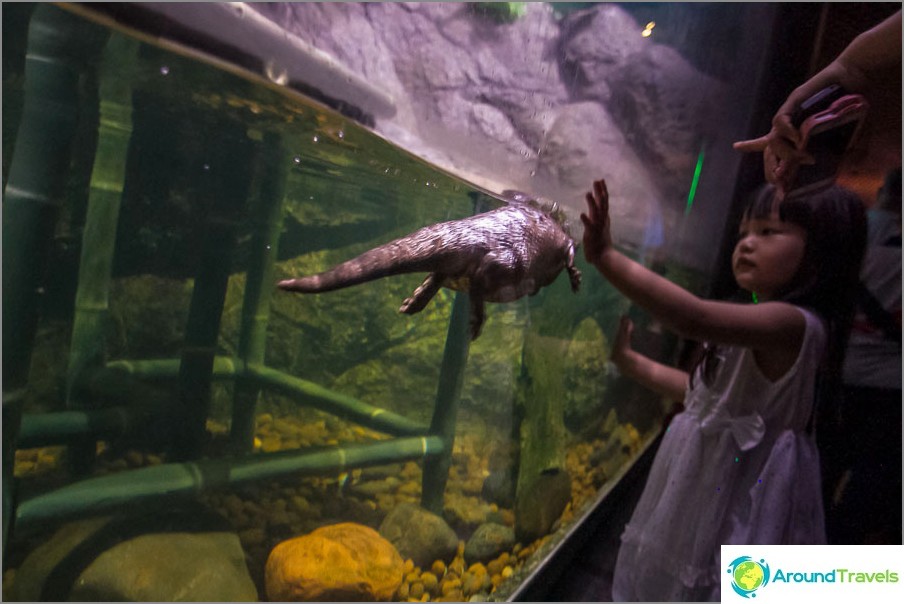 Mega-speed otter, or whatever? 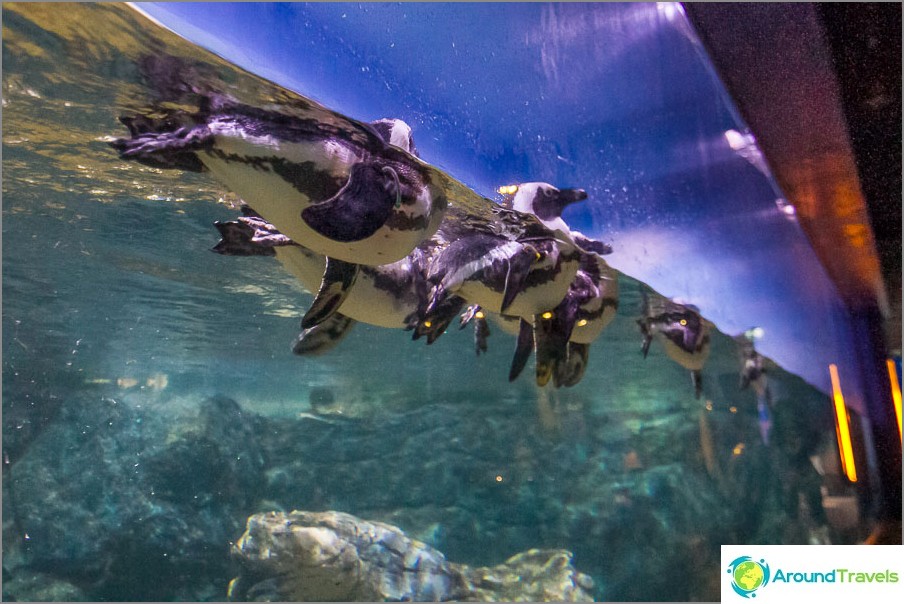 For young children, perhaps the most interesting entertainment is the opportunity to climb into the aquarium with a pen and touch a rough starfish there. Yes, of course, the star herself is completely off-putting that she is touched by a thousand hands in a day, but this causes complete delight in children..

It's a pity that there was no one other than the star. 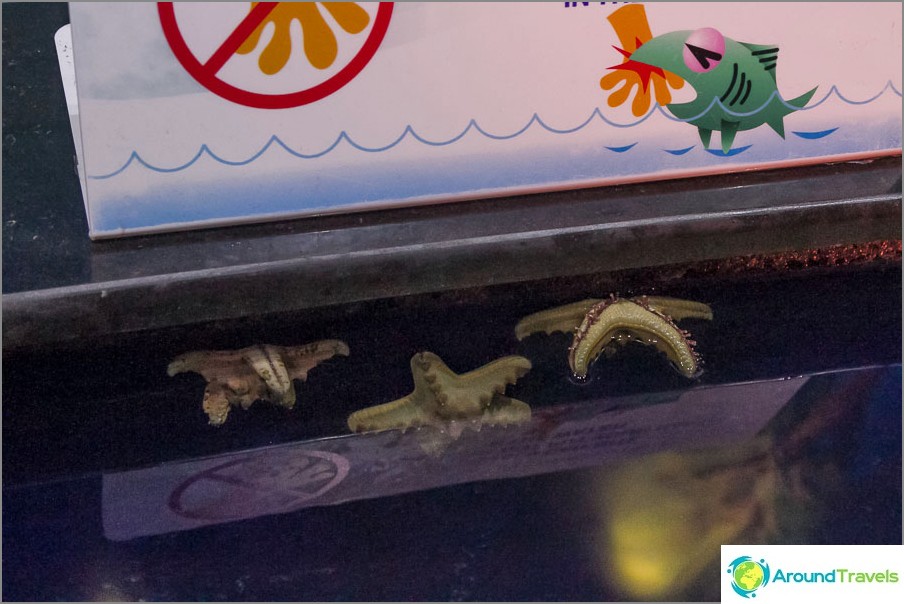 Starfish are asked not to be taken out of the water, although few people listen to it

This is my favorite place in the aquarium! I have a genuine childish delight with huge fish and sharks swimming over my head! In general, this feeling that you are under water, under all these marine life, and not above them, really explodes the imagination..

You see a dangerous, toothy hulk floating above you now, and it's very cool that you can see it up close, a little scary and at the same time interesting. Although fear may be due to the fact that I watched a movie about sharks as a child and look at them with a shudder.

A lot of people periodically accumulated in the tunnel, it's still better to come on a weekday, otherwise a queue is almost created. 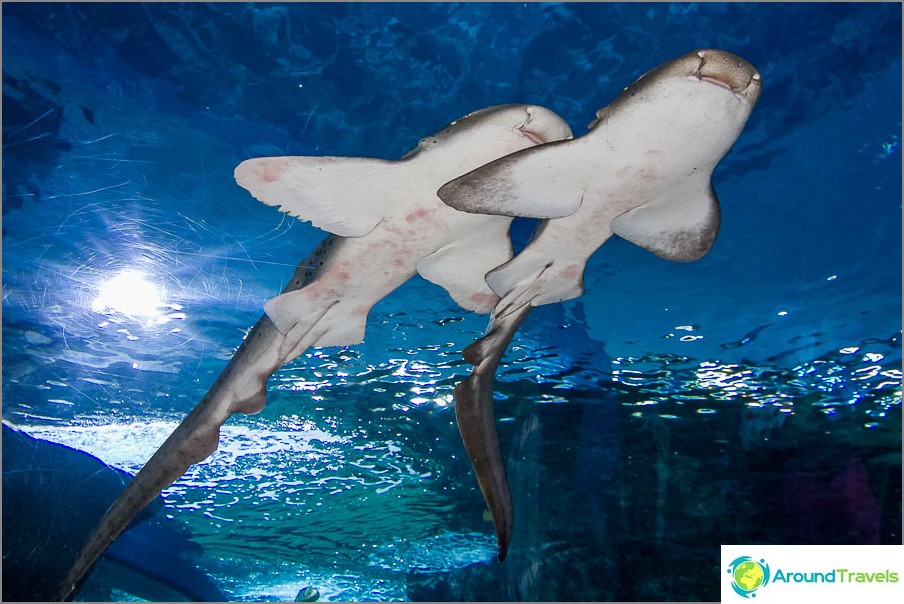 These always swam in pairs, so cool 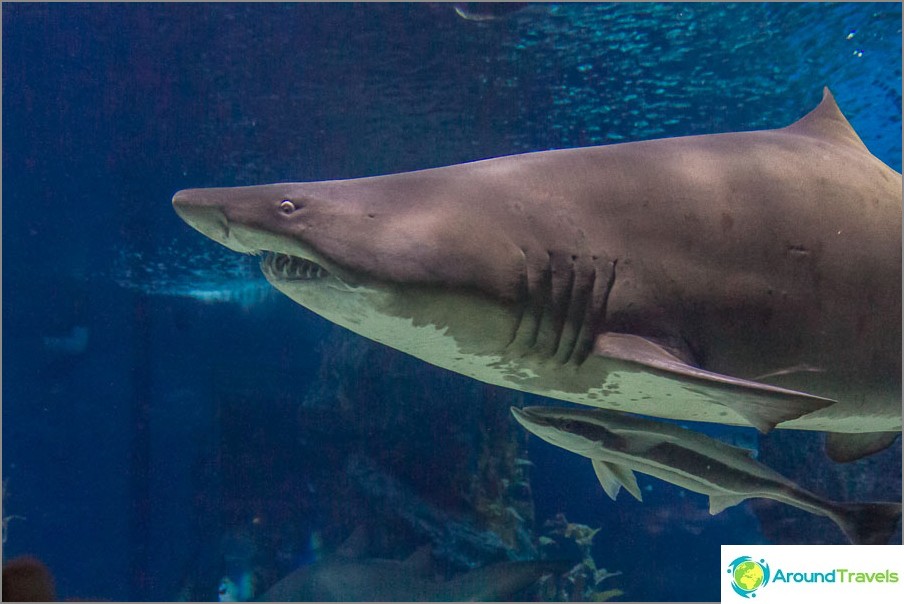 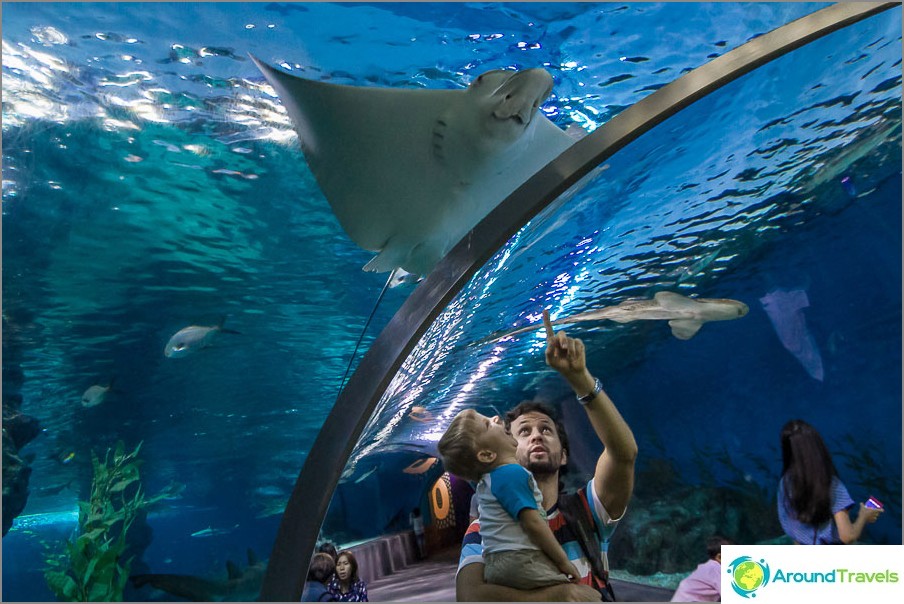 But from a high you can see much better 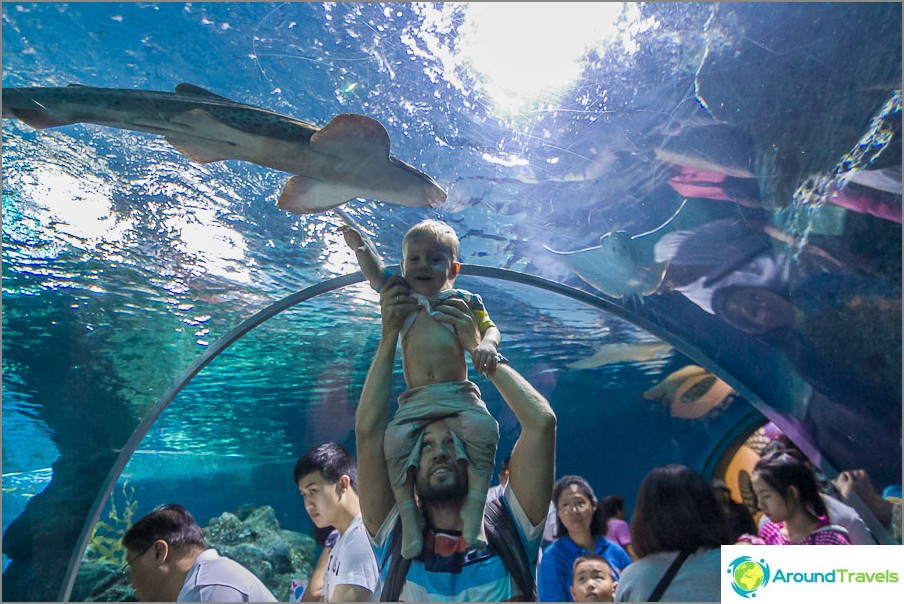 And interesting and scary 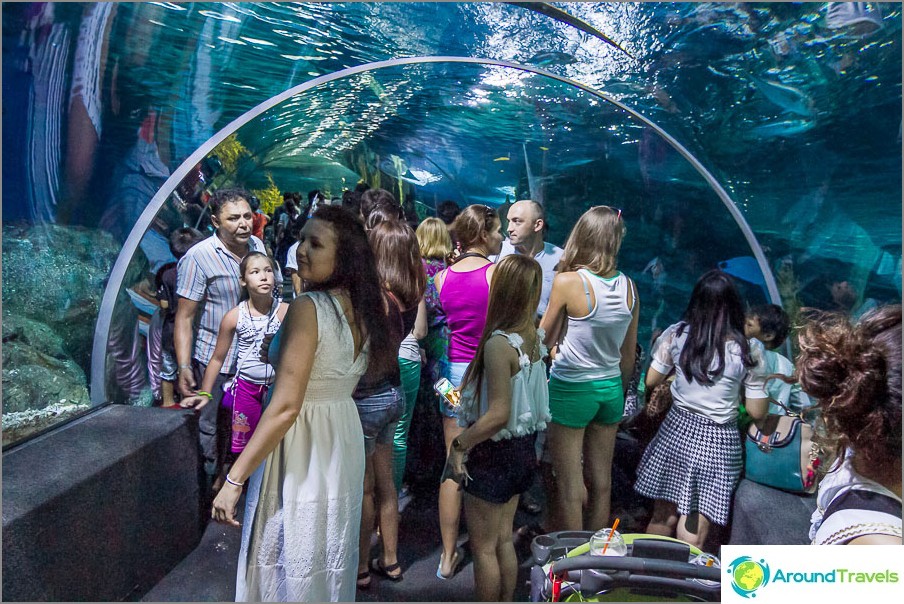 Sometimes the tunnel is not crowded 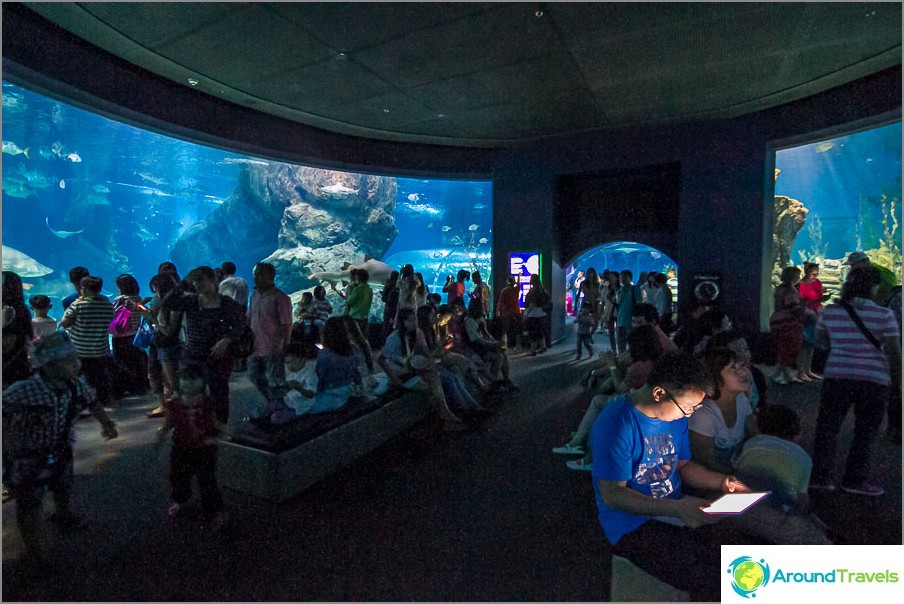 The aquarium that ends the tunnel

And one of the brightest impressions was feeding the sharks. I looked at the schedule, when it will be (2 times a day), I specially took comfortable seats in advance and waited for the performance. The aquarium in which this action took place was very large, for the entire wall, opposite it there were benches, like in an amphitheater, so that everyone could see everything well.

First came two divers with buckets, then sharks appeared. They fed them with pieces of fish, which were mounted on long sticks-pins. Everything seemed to be safe, but it looked creepy. Sharks rushed so abruptly on these pieces, they were swallowed so terribly at once. 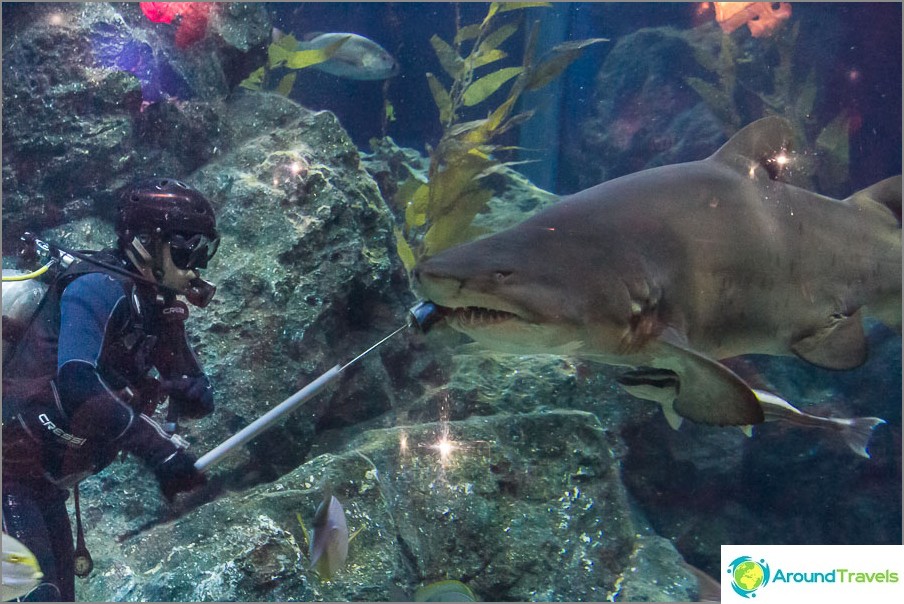 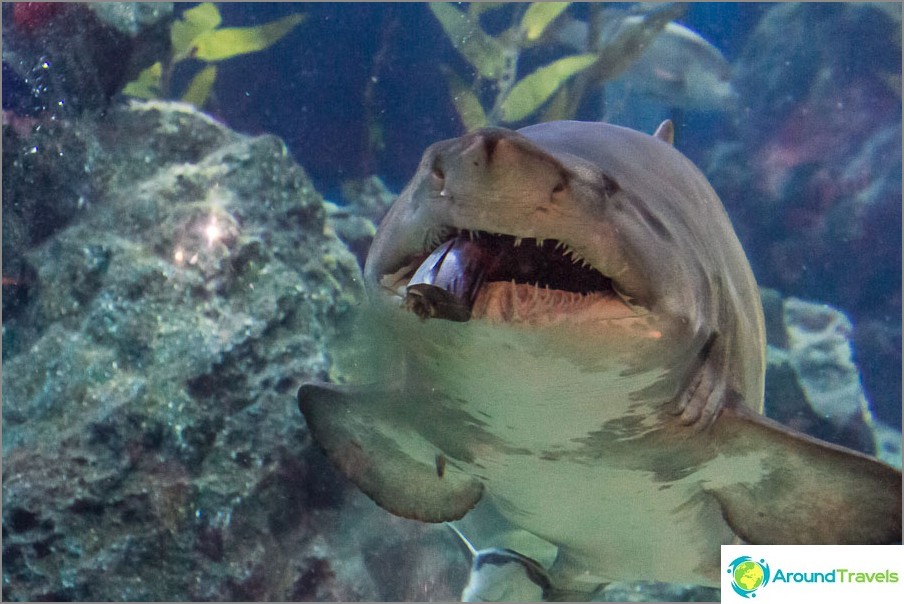 Jellyfish and chill out

There is one very meditative place in the aquarium - the jellyfish room. The lights are almost completely turned off there, quiet calm music plays unobtrusively, there is a circular soft sofa in the middle of the room, and all the aquariums with jellyfish are somehow cleverly highlighted.

So, these creatures look like some magical inhabitants of an unknown country, such as Pandora from Avatar. Different sizes and shapes, they swim impressively and beautifully in their aquariums, shimmering with all the colors of the rainbow.. 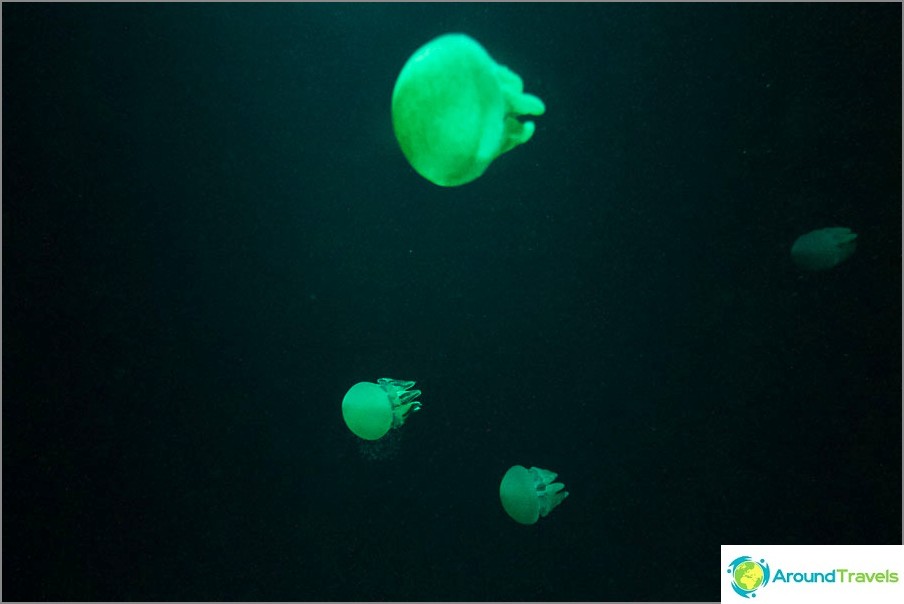 Illuminated jellyfish in the chillout

There is one more entertainment at the Bangkok Oceanarium that I have not tried. This is a boat ride with a transparent bottom, which floats on the surface of the water above the same tunnel and its passengers look down at all the inhabitants. I don't know how interesting it is. It seems to me not very much, a waste of money.

The Oceanarium is the place where you should go yourself, even if you don't have children, because even adults are interested there. And if there are children, then this is generally the number one attraction.. 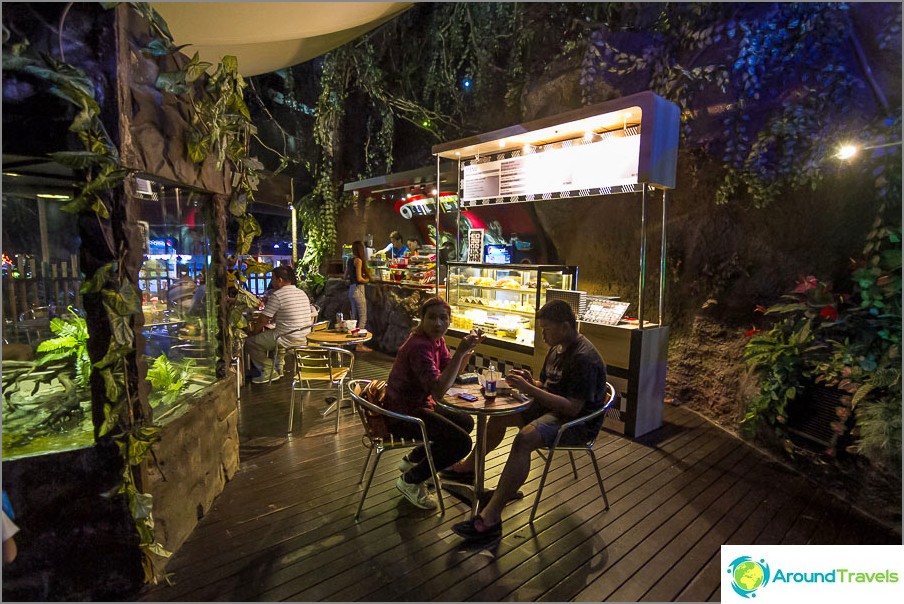 Cafe at the Bangkok Oceanarium 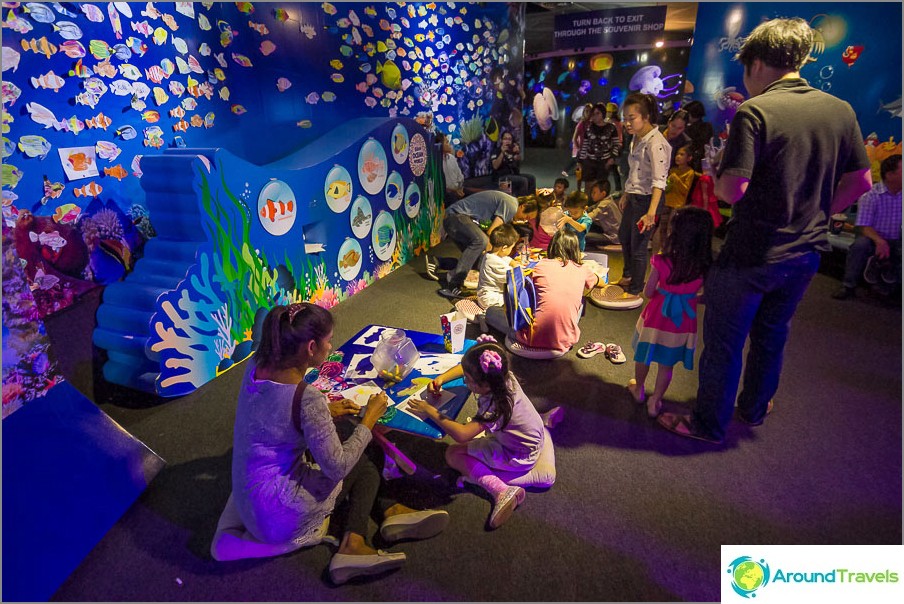 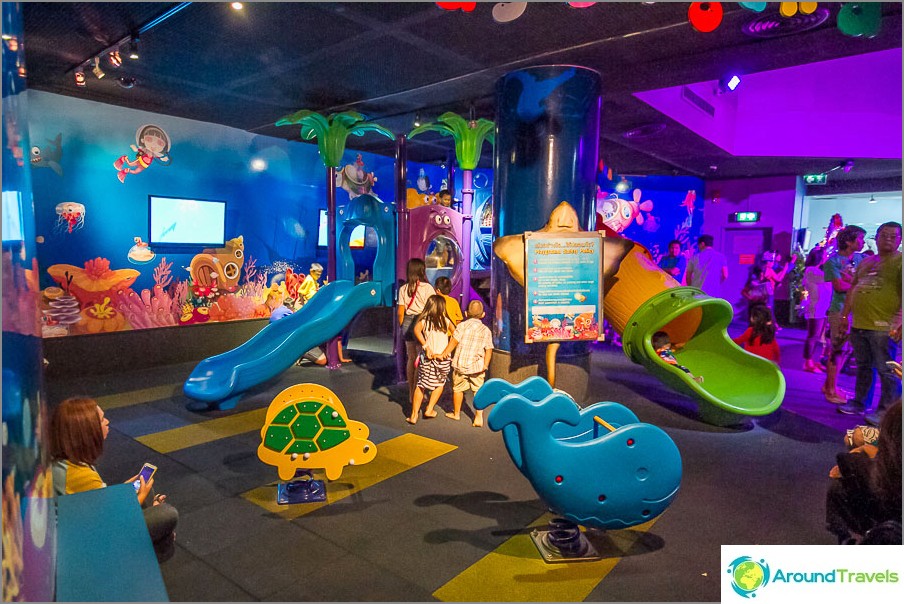 Opening hours: 10 am to 9 pm (you must enter before 20:00, but the hours for viewing will not be enough). It is best to lay at least 2-3 hours for viewing, especially with children, and if you want to watch animal feeding.

Aquarium ticket + 4D cinema and glass bottom boat ticket price: 1,300 baht adult, 1,100 baht adult. But to be honest, it's not worth it. The cinema is bullshit, as elsewhere, the video will be shown and that's it (the cinema is closed until April 2019). The boat is also a dubious pleasure.

Since the tickets are not very cheap, I have a life hack for you on how to buy tickets cheaper: 700 baht for an adult and 650 baht for a child. Cheaper than the official website! Also, you can skip the line, which is very important at times.

If you are several people, then the discount will be good. We go to the Klook website, register and buy tickets online for today or another date. Immediately after payment, you will receive a voucher by mail. It will need to be shown at the entrance on the phone screen.

How to get to the aquarium

It is not difficult to find Siam Ocean World, it is located right next to the BTS Siam station in the building of the huge Siam Paragon shopping center (there are several shopping centers in a row and BTS near the desired one). Going down from BTS, go to the shopping center, go to the first floor (if you are not on it), and there will be an escalator down near the food court (this is the underground floor). It's easier, probably, to ask a security guard there, so as not to wander, everyone knows the oceanarium there..