Ordzhonikidze sanatorium in Sochi is a magnificent abandoned building

One of the most beautiful architectural complexes in Sochi. The sanatorium consists of 3 buildings that make up the letter «NS» around the square with a dead fountain, on which the best sculptors of the country once worked. Desolation, silence, riot of vegetation, signs of destruction of facades, prohibiting signs, grass sprouting through cracks - none of the above can hide the lightness of the lines and the greatness of this complex.

The Ordzhonikidze sanatorium in Sochi is so good that I recommend visiting it without fail. This is not a museum, guides do not go here, crowds of tourists do not come, there is no ticket office and are not allowed inside the premises. They will let you through at the barrier, tell you where to go, that's all, then you are on your own. If you have a car, then it is more convenient to drive in from the side of the upper entrance: there is always a parking place early in the morning, and the inspection is obtained with a wow effect. You seem to come out from behind the central building of the dining club and, as you climb the steps, you see a stunning landscape with the sea on the horizon. If there is no car, then the bus will help you, and get up from the stop «Sanatorium Ordzhonikidze» up the steps.

The complex is not that abandoned - it is being guarded. And you can see that they are cleaning in places, but eight years of inactivity and lack of daily care gradually turned it into a ghost sanatorium. Here, any shot turns out like from a movie, I would not be surprised if photographers from Sochi hold wedding and love story photo sessions here, with such an entourage it is difficult to spoil the photos. There is a lot of shadow here, many arches, gaps and spans - a very light atmosphere. Monumental, but not massive, solemn, but not pretentious, majestic, but not arrogant. In short, have you already realized that I liked the Ordzhonikidze sanatorium in Sochi? Here are some pictures for you. 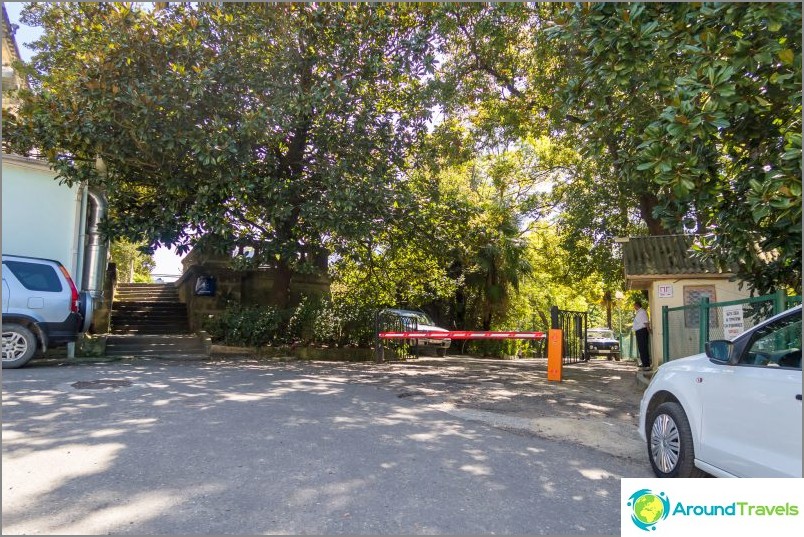 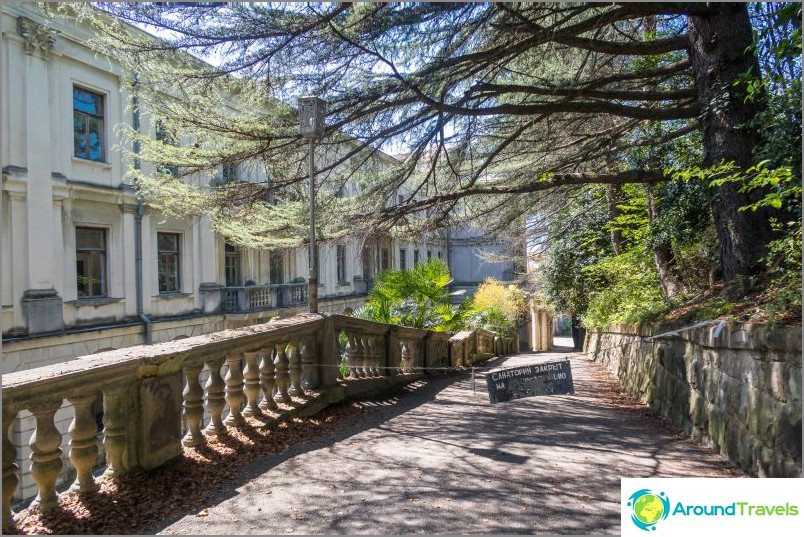 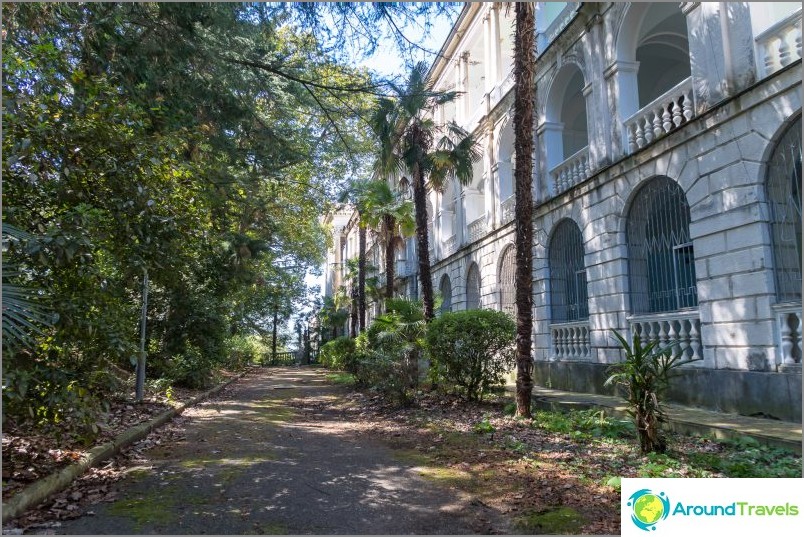 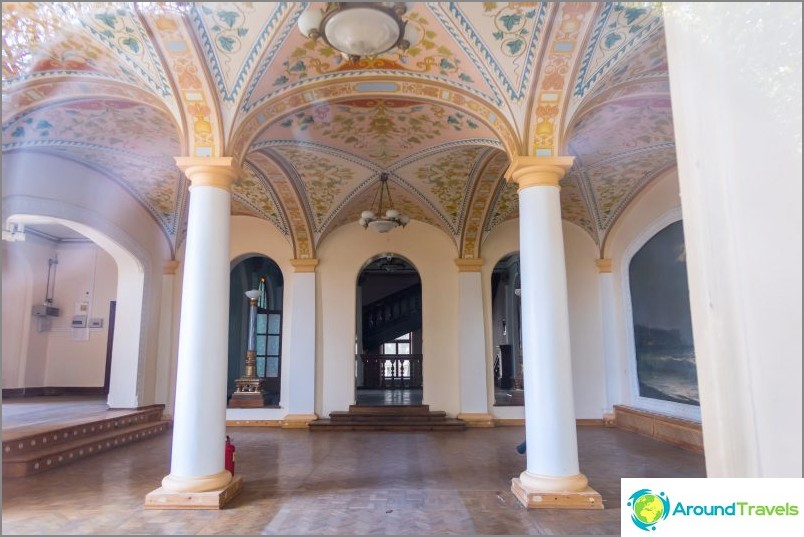 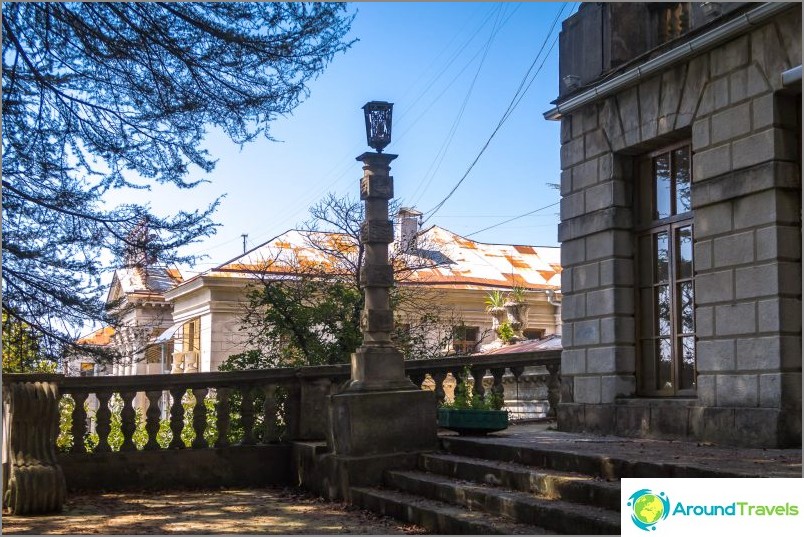 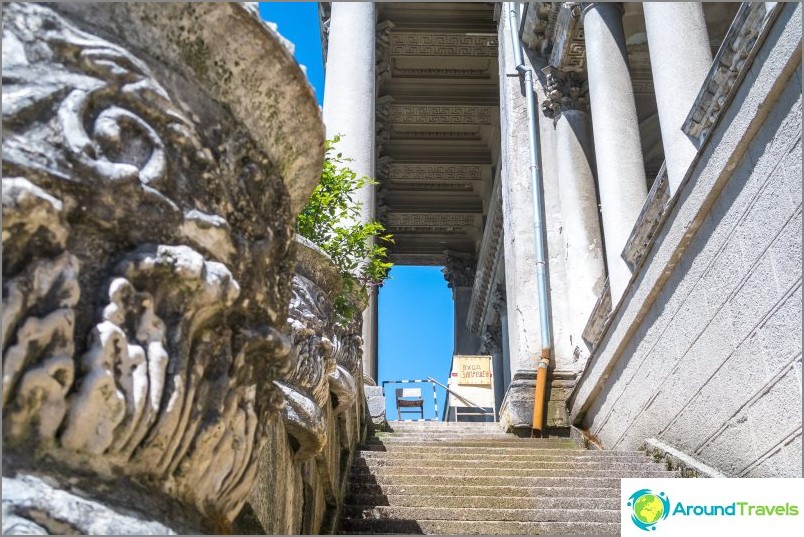 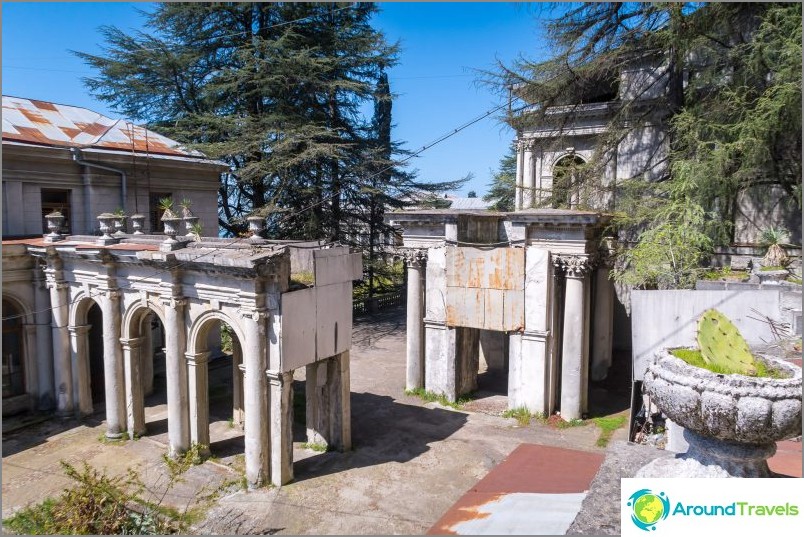 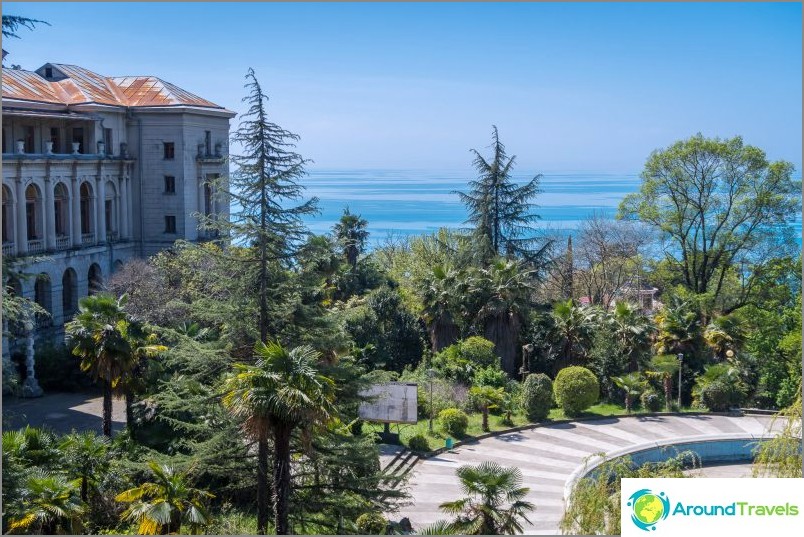 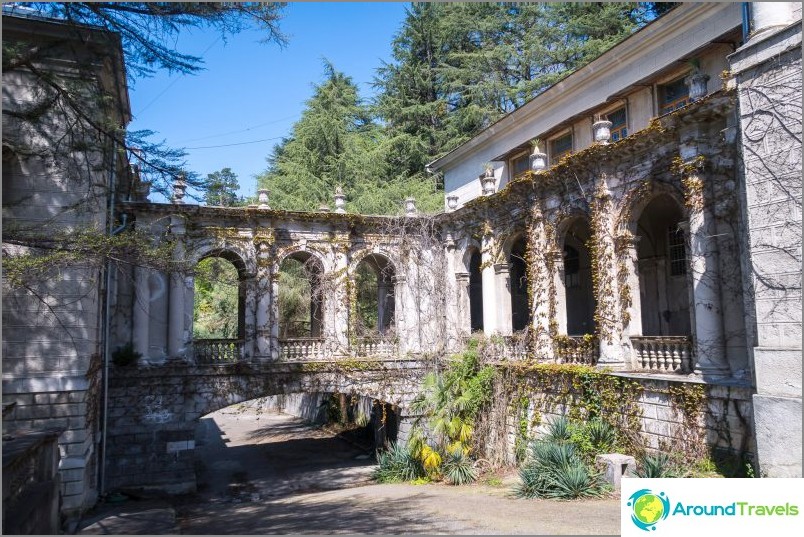 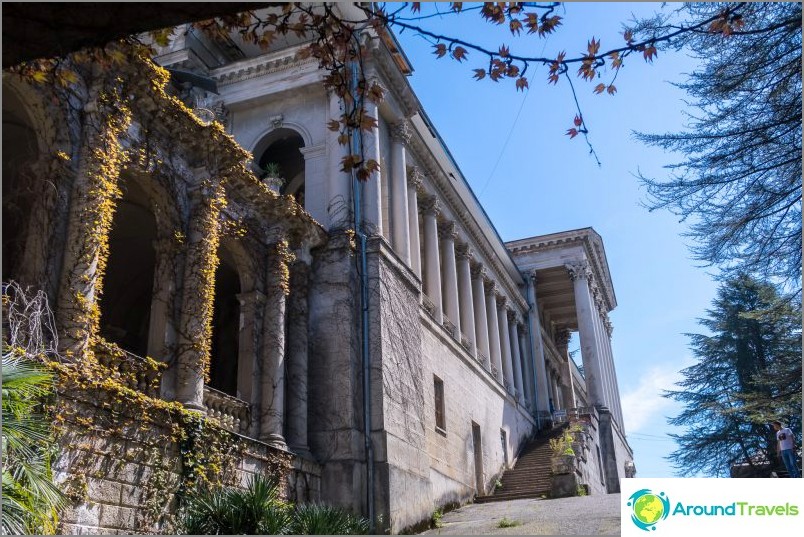 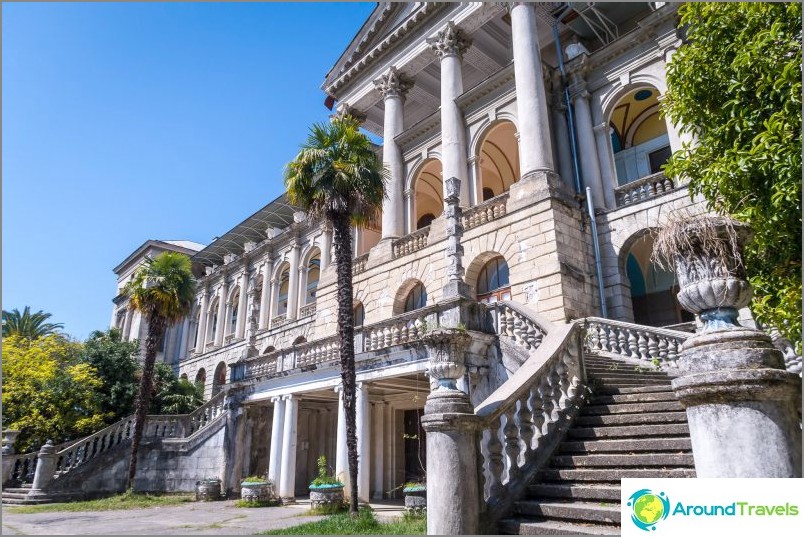 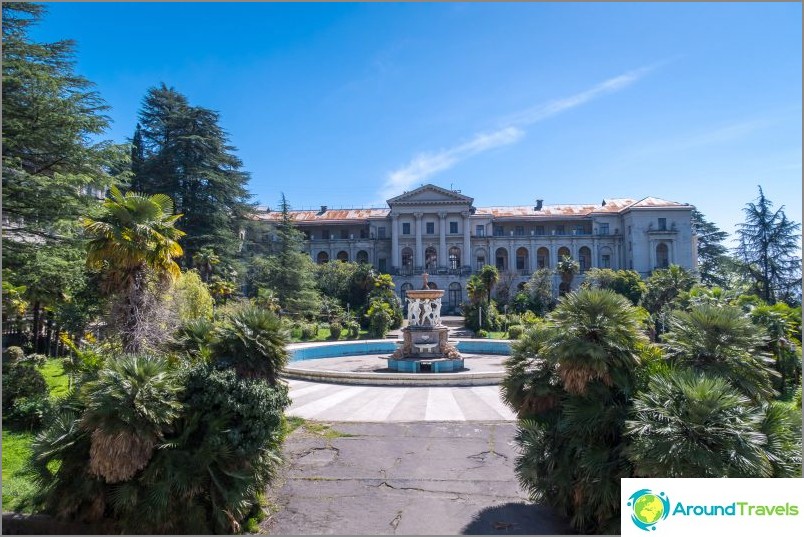 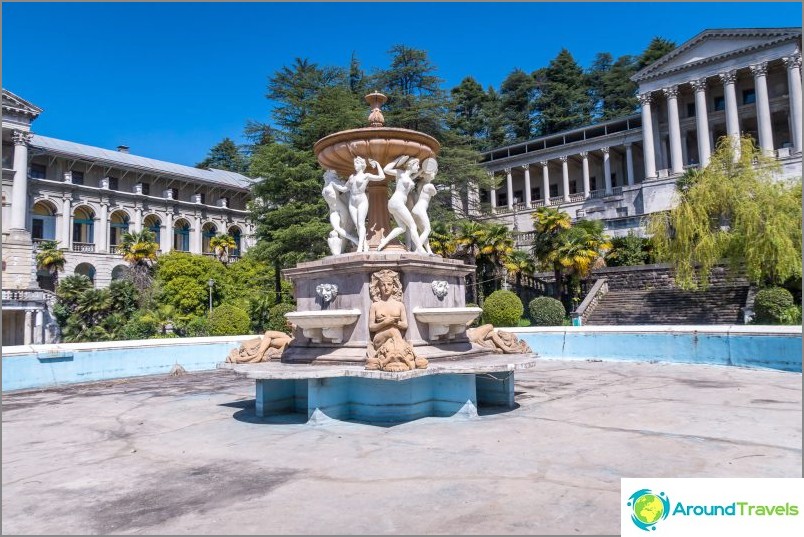 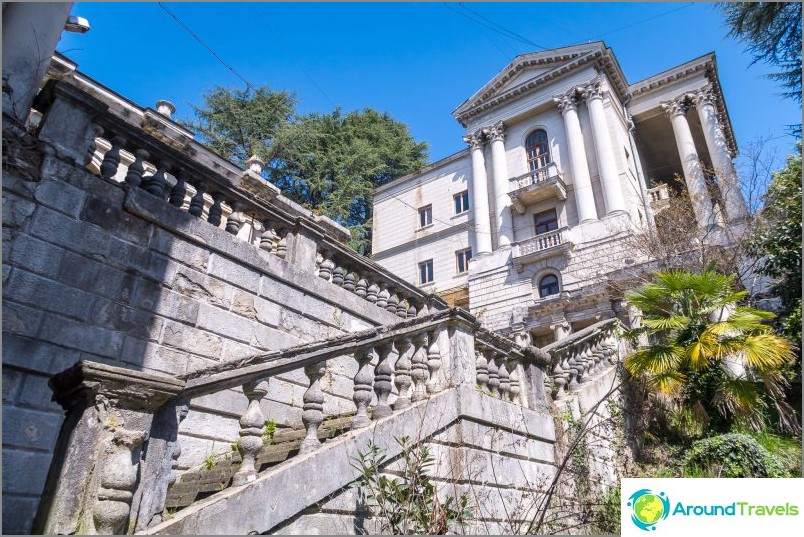 In 1934, the People's Commissar of Heavy Industry Sergo Ordzhonikidze launched the construction of a sanatorium in Sochi, and personally participated in the choice of the location. In 1935, after survey work, a team of young professionals was selected. In the same year, construction began on the canteen club (central building) and dormitories (side buildings). It took only three years to build this beauty, and the first guests visited the sanatorium on December 13, 1937. The fountain in the central square of the Ordzhonikidze Sanatorium in Sochi was completed in 1939. In 1952, a funicular appeared here, running between the sanatorium and the beach.

And then the Soviet Union ended, but until 2010 the sanatorium functioned, until it was finally closed due to a change of ownership. The staff (about 300 people) was thrown out into the street, and for ordinary people who came here to improve their health, the fairy tale about old man Hottabych ended (the film was filmed here). Before the Olympics in Sochi, an attempt was made to restore the sanatorium as a luxury hotel in order to have time to include it in the list of basic Olympic hotels and make money.

According to the Sochi architect Kalyamin M.N., who was invited as an expert on the commission to survey the sanatorium, three serious problems emerged there that could not be solved at the first click. First: due to the construction of some unrealistically massive building higher on the slope of Mount Bytkha, which was built with violations and it is not clear how it passed the state commission, serious changes took place in the soil. Discrepancies between the blocks and significant cracks were found near the buildings of the sanatorium. Second, the difference between the building requirements of that era and those of today. The Ordzhonikidze sanatorium was designed for earthquakes of no more than 5-6 points at the best of times, and now in Sochi they are building with the expectation of 8-9.

Taking into account the defects that already existed at the time of the inspection, which did not correspond at all to the new requirements for seismic resistance, the sanatorium had to be demolished to the ground and rebuilt. Well, the last obstacle to the rapid restoration of the Ordzhonikidze sanatorium in Sochi is that the complex belongs to the list of architectural monuments. That is, according to the law, it can be restored and repaired only with the preservation of all interior and exterior details. Judging by the reaction of the owners, no documentation on this matter has been preserved since the times of the Union, which means that before the restoration it was necessary to carry out an expensive and long-term revision of everything..

In short, the sanatorium has not begun to be renovated either by the Olympics or by today. In 2016, the privatization transaction of the sanatorium was declared illegal and the entire complex was transferred to the Administrative Department of the President of the Russian Federation. According to the latest news that it turned out to be dug on the Runet, in 2017 they were going to restore it for foreign investments, the amount of which is supposedly equal to 22 billion rubles. Will it really be, or ...

Admission is free, but limited only to the street area, no one is allowed inside.

There are no shops or stalls here, it is better to take water and sandwiches with you. Some parts of the complex are already dangerous to health, constantly look up, passing along the terraces.

There is no parking, but you can leave the car near the security gate, they do not mind.

A leisurely inspection will take about 30-40 minutes.

Sanatorium Ordzhonikidze in Sochi
Abandoned, but well-preserved and guarded building, or rather, the complex of buildings of the Ordzhonikidze sanatorium.
More details.

An abandoned but well-preserved and guarded building, or rather, a complex of buildings of the Ordzhonikidze sanatorium. More details.