Thakiab beach is located just behind Mount Khao Thakiab. It resembles a parabola, or half a lime. Extends «as long as the eyes are looking» (km 5-6), however, the infrastructure is concentrated in a small area near the mountain. In this place, the beach is wide, a hundred meters, or even more. During low tide, it visually increases even more, and to stomp to the water - do not trample.

At the junction of sand and trees, a beach town is laid out: sun loungers and umbrellas, unpretentious cafes. Scooters, boats, horses are stuck in the free areas. All this is for rent. Behind the trees - hotels, houses, 6-7 lanes (Thakiab Bay Alleys), for each of which you can freely get to the sea.

The sand is fine white with an admixture of black volcanic. Due to this, the beach looks unkempt and dirty. The sensation intensifies during low tides, which are not uncommon here. The sea leaves, leaving behind a raid of mice.

Takiab is a beach for everybody. Somewhat reminiscent of an oriental bazaar - chaotic, without clear boundaries. It can not be called sparsely crowded, although the supply (sun loungers and umbrellas) clearly exceeds the demand (the number of tourists). There are many very different people, each busy with his own business. Tourists lie or walk, less often swim, go boating. Thais gather crabs in shallow water. Fishing children (near the mountain there is a small fishing village with «port») collect shells and splash, not letting go of ice cream ...

The bottom is gently sloping, sand with small pebbles, 5-7 meters from the coast - shallow water, as in the central part of the city beach of Hua Hin. The water is just as cloudy due to constant almost waves. At low tide, a 4-5-meter strip is additionally exposed, covered with dirty sand. Many meters ahead - the sea is knee-deep. The little people seem to stick out at the horizon with towers. Moreover, bathers, fans of windsurfing (board with a sail) and scooters have fun side by side, about the same distance from the coast.

There are more than enough different-sized sunbeds and umbrellas (worse - better, from different owners). There is a lot of competition for tourists looking for a place in the sun. They try to lay our brother «from the doorway». That is why the price for sun loungers is democratic and fixed (in contrast to Sai Noi beach): 50 baht / person. The huge spaces of the beach allow you to lie down on your own towel, i.e. for nothing. But, unlike the city beach of Hua Hin, you don't want to here, and there are almost no savages. I admit that this is due to the pressed sand of the color of gunpowder, which does not really dispose to soak up. Although there is no more garbage on Takiab Beach than on any other Hua Hin.

Unlike the city beach, there is a whole array of spreading trees and palms, the shadow of which belongs to the masses. Including horses that are peacefully dozing while waiting for work. 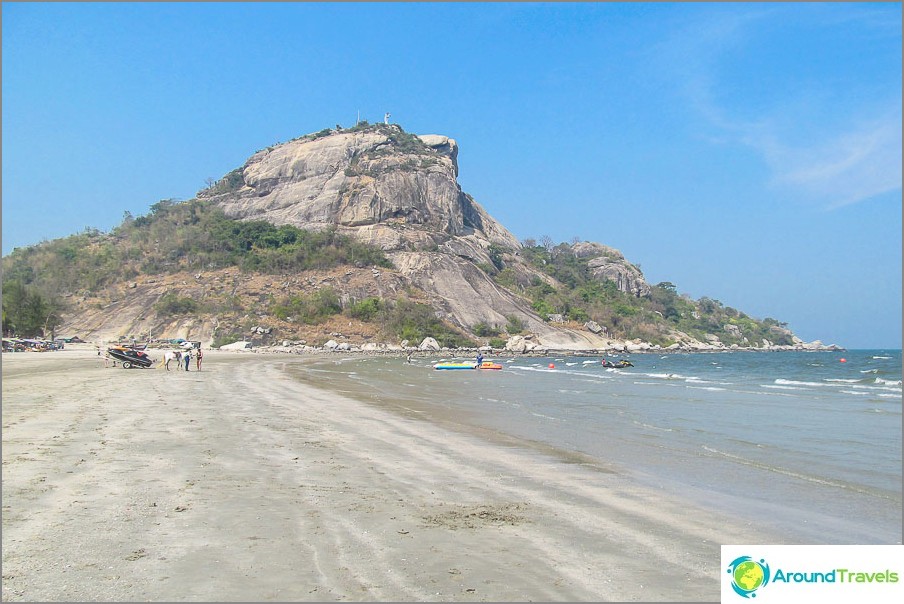 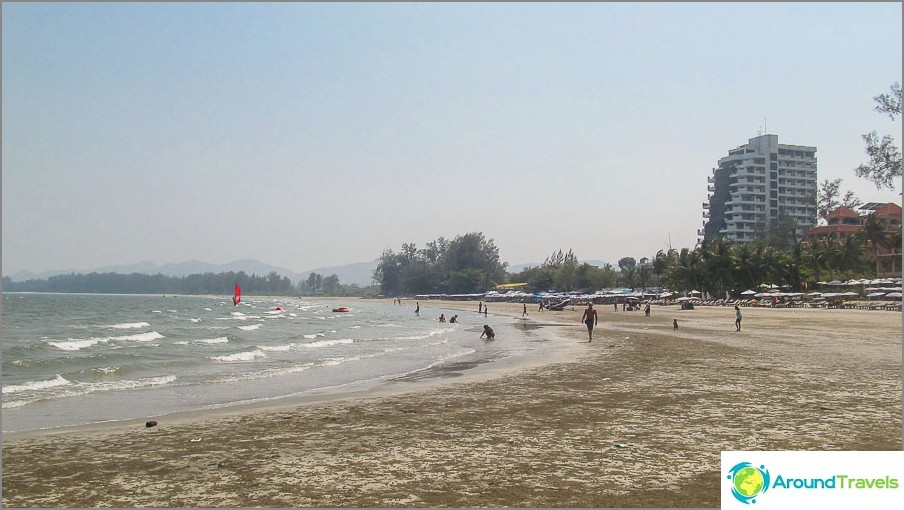 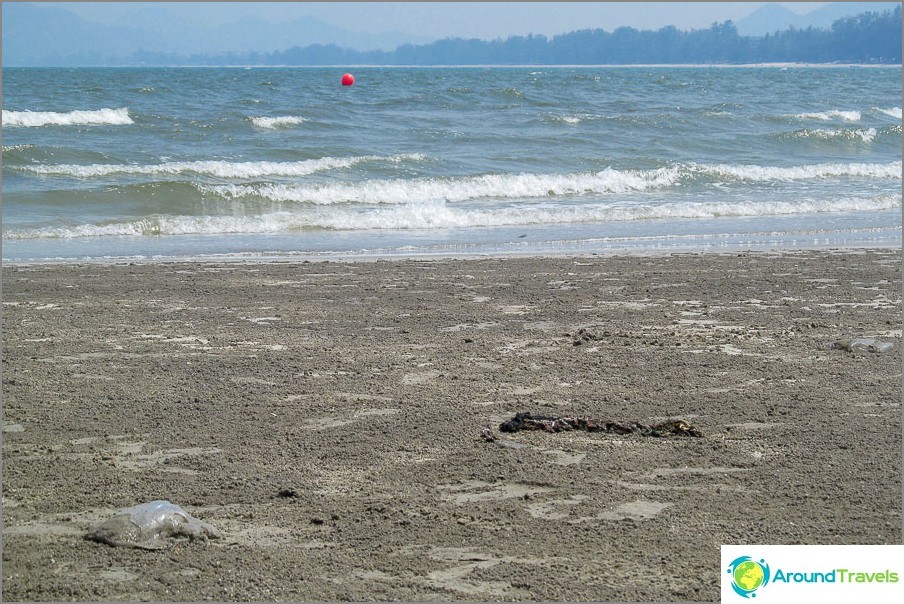 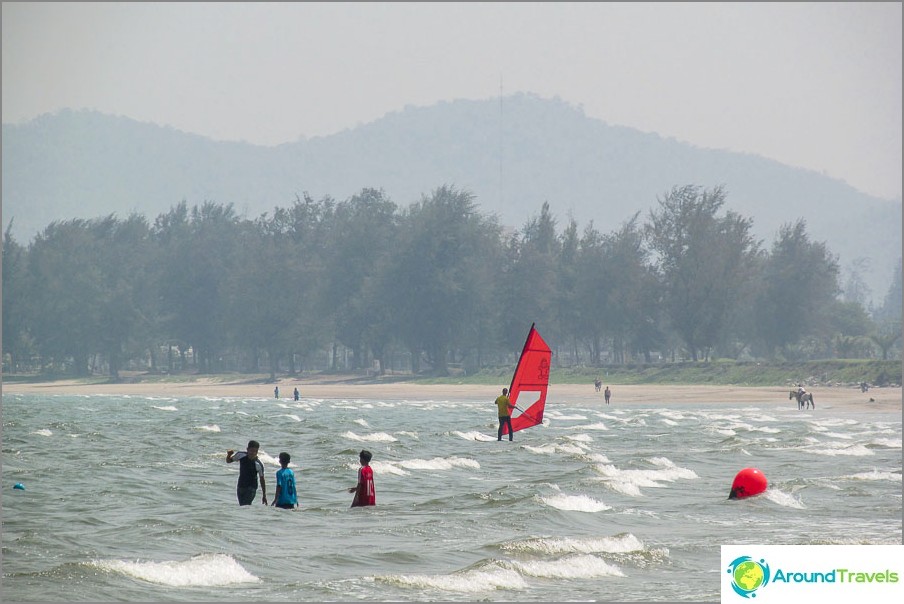 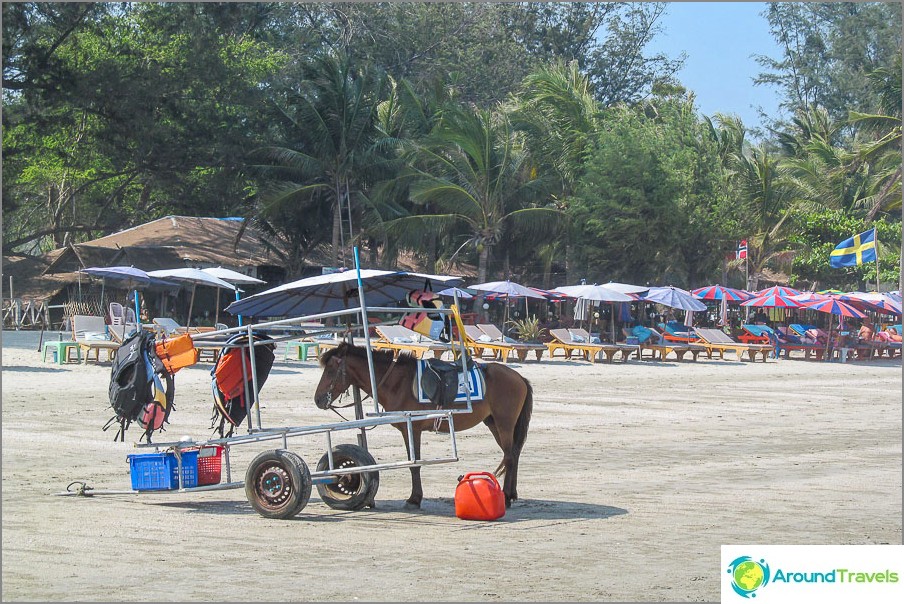 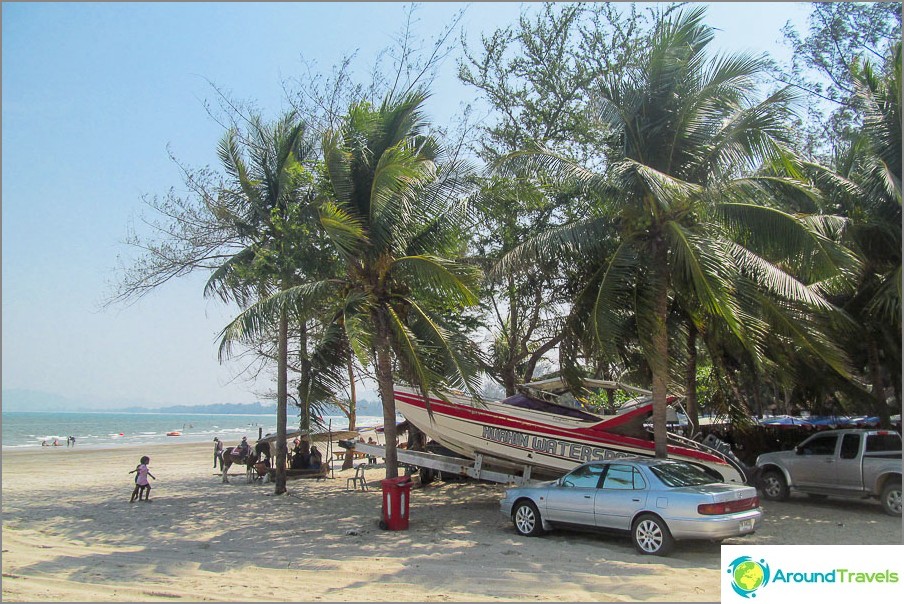 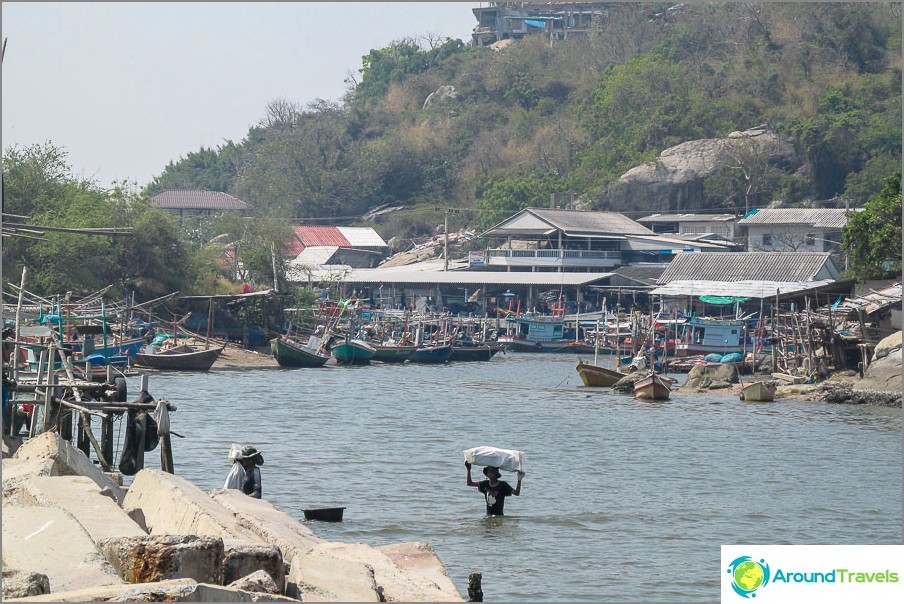 Takiab Beach originated in a fairly lively area. There is no smell of food in the side streets leading to the beach. There are only houses and hotels behind fences. But on the road from which these lanes turn off, a five-minute drive from the sea, there are cafes, 7-11 and Family Mart shops, a laundry room with washing machines, and several shops. Twice a week there is a market near the temple, where everyone is shopping, because to the nearest Tesco you need to go to Hua Hin (there is a closer one, but it is small and there is no public transport). On the beach, within the sun loungers, there is also a pair of eedalens. There is sea food on the menu - and the food is most likely fresh, since next to the mountain is a fishing village with a quirky fleet at rest.

By the way, this extreme point on the beach is the most picturesque, the eye has something to catch on. The stone side of Takiab rises above the sea. At the foot there are fishing houses. From the land near the mountain itself, a ridge of slabs and stones pierces the sea. It is shallow here, living creatures between the stones and teeming. Therefore, herons and «fishermen» with hooks no less than crabs that hide from them. Unfortunately, the main attractions of Takiab - temples, Buddha - cannot be reached from the beach, only a detour.

In the neighborhood of the beach, there are enough hotels of a very different kind: stylized as a royal palace (from 8 thousand baht / night), panel-box, similar to condos (from 3.5 thousand baht), low-rise home bungalows (1 - 1.5 thousand baht) and even a whole condominium (from 2.8 thousand baht / night). Two hotels look directly at the sea - however, with windows in the rooms «luxury». You will find more than a dozen if you walk through the alleys. There are suggestions and a 10-15 minute walk from Takiab to «military» the beach. Definitely, Thakiab beach is a hotel place, unlike Sai Noi beach, where (due to its proximity to the private beach of the royal family) the construction business is not allowed to shoot.

There may be houses for rent in the side streets, but not a single sign «house for rent» we didn’t see. Usually on Takiab they live in condominiums, which are enough here: Marakesh, Seacraise, Breeze, Viman, etc. All of them are located within walking distance from the beach. If you have your own transport, then you can move away from Takiab towards the highway, where I saw cottage villages.

Hotels nearby I advise you to search on RoomGuru, convenient service for comparing prices in different booking systems. It will quickly and easily show you the range of prices for the hotel you need. In Asia, for example, there are a lot of offers on Agoda.com, which are much more interesting than for exactly the same hotels on Booking.com.

By bike, auto. Drive along Petch Kasem rd. south, towards Takiab to the final tuk-tuk. Here is a fork, continue on the road to the right. Turn off it into any alley, they all lead to Thakiab beach. From the end of tuk-tuk to the beach - 4-5 minutes drive.

By route tuk-tuk + on foot. On a green tuk-tuk (10 baht / person), which goes from the center to the terminal in Takiab. Then - as described above, only along the road on foot (15 minutes).

Takiab on the map