The sunsets on Taling Ngam Beach are the best way to end a day on the island. Five kilometers of a narrow beach, interrupted by rocks and stones, stretches from the promontory separating Taling Ngam and Lipa Noy, to the shallow beach Pang Ka.

Several expensive hotels and restaurants have been built along the coast overlooking the five islands, which are called here «Five Sisters», and silhouette of mainland Thailand in the background. When old-timers of the island are asked where in Koh Samui you can visit a real island with its atmosphere of isolation from the outside world and uncrowded places, they answer «Taling Ngam».

The sand on Taling Ngam is coarse, yellow-brown, with layers of even larger, and the same color. On the southern outskirts of the beach there are areas that consist only of very coarse sand, where grains of sand are each the size of a match head. It is difficult to move along such a coast and in the sun it, for some reason, heats up more than ordinary sand.

Taling Ngam is considered a wild beach, but the order in front of the hotels is regularly maintained, so deposits of garbage can be found only in areas that are on the outskirts and between stones. Taling Ngam coast is very rocky, especially in the south.

Due to the low population density of the area around the beach, on Taling Ngam you rarely feel the discomfort of too many people around. In case anyone is interested in reading about other places, I have a short overview of all the beaches of Koh Samui, will help you decide on the choice of the beach.

Low tide takes the sea up to 10 meters from the coast, but Taling Ngam still remains bathable. Fifty meters from the water's edge, the depth reaches a meter, up to the waist of an adult. But almost all over the beach, the bottom is covered with a large number of stones, fragments of coral.

There are practically no clean sections of the seabed, since the western coast is not yet massively populated by tourists and there is no need for clearing, as was done on Chaweng..

Sun loungers, beach umbrellas and hammocks can be found on the territory of Taling Ngam hotels. The width of the beach, which with the tide is almost completely hidden under the water, does not allow leaving personal property on the shore. But you can often come across a swing or a rope hanging from a palm tree. Palms on Taling Ngam are noble - tall and old.

Because of their height, they provide little shade and are easily subject to the onslaught of waves, which, year after year, wash away the palm roots and gradually overwhelm the local flora. This beach has a large concentration of crooked palms that are so loved by vacationers.. 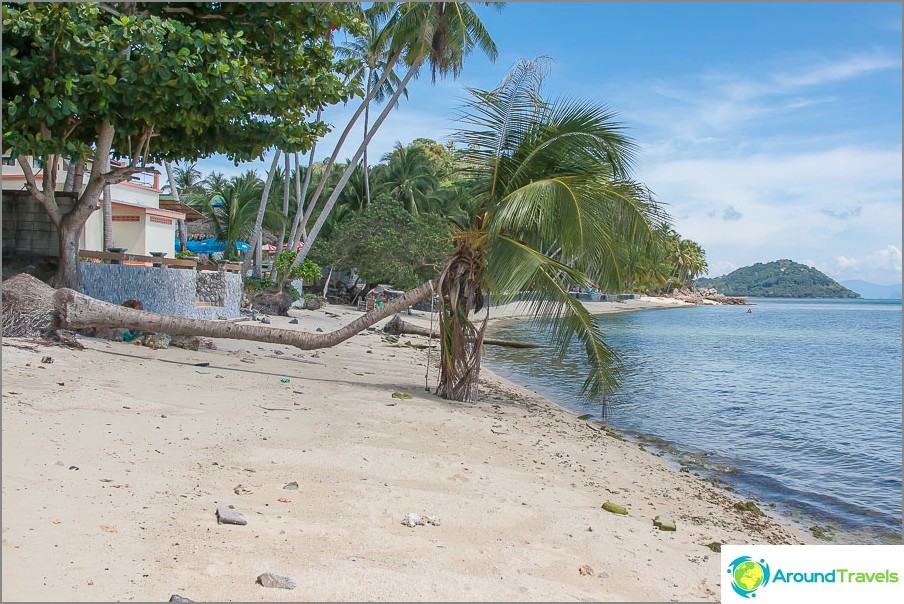 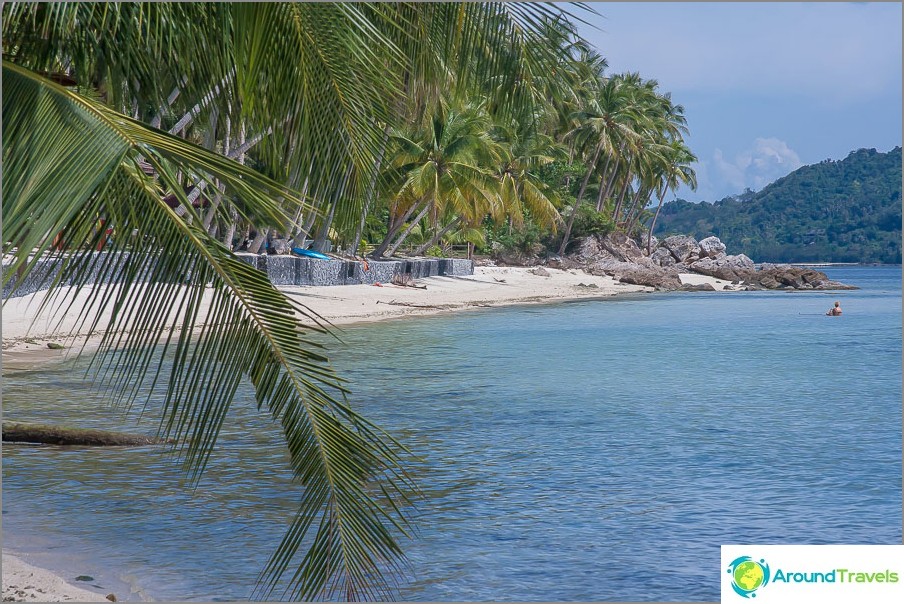 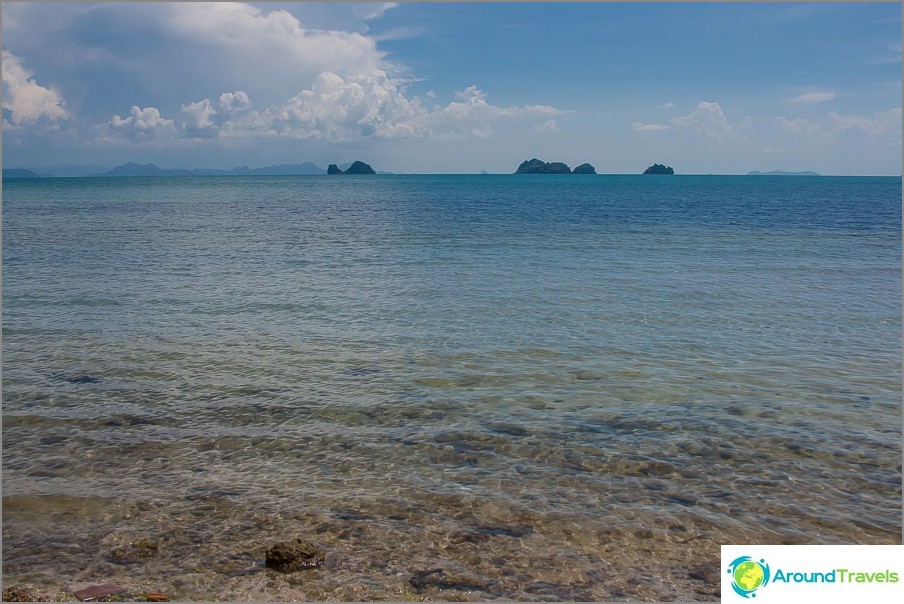 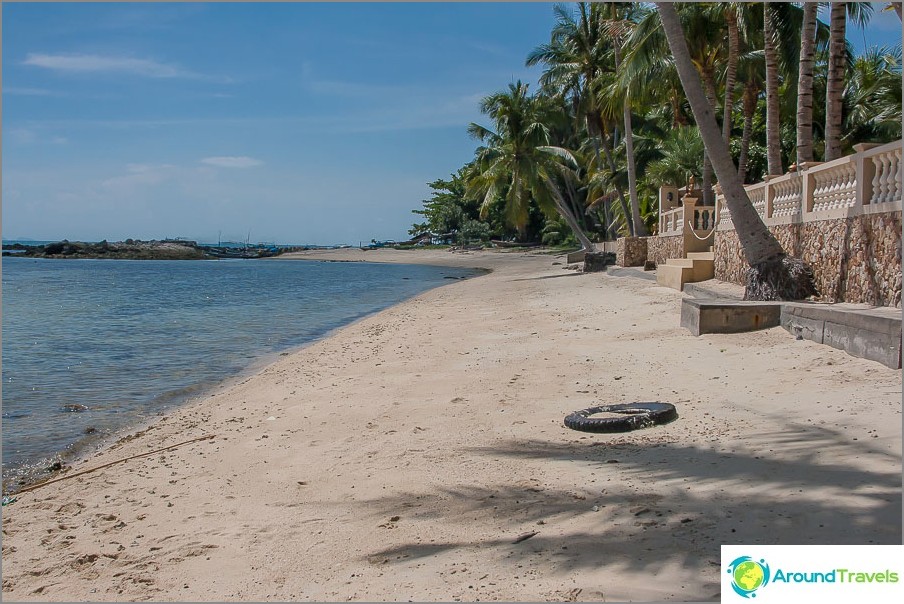 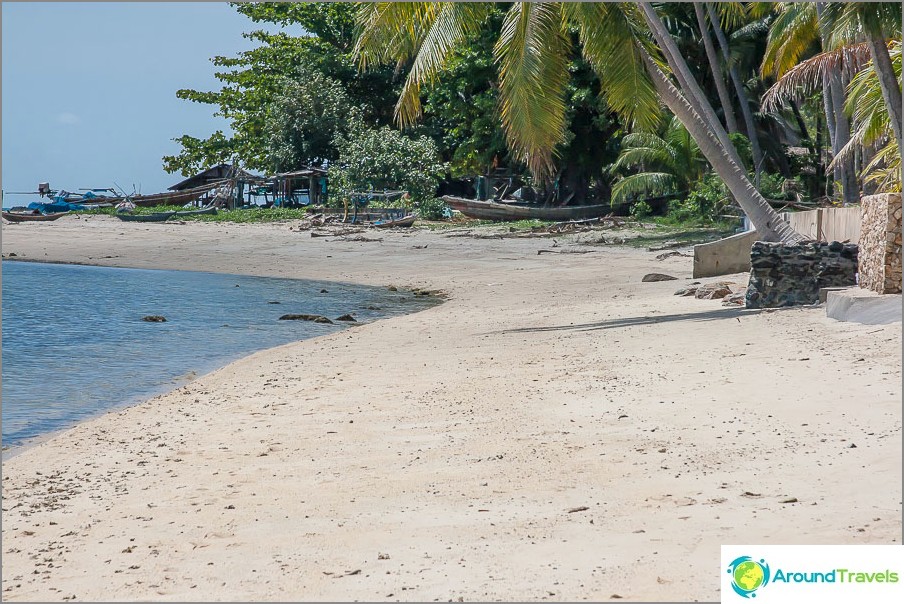 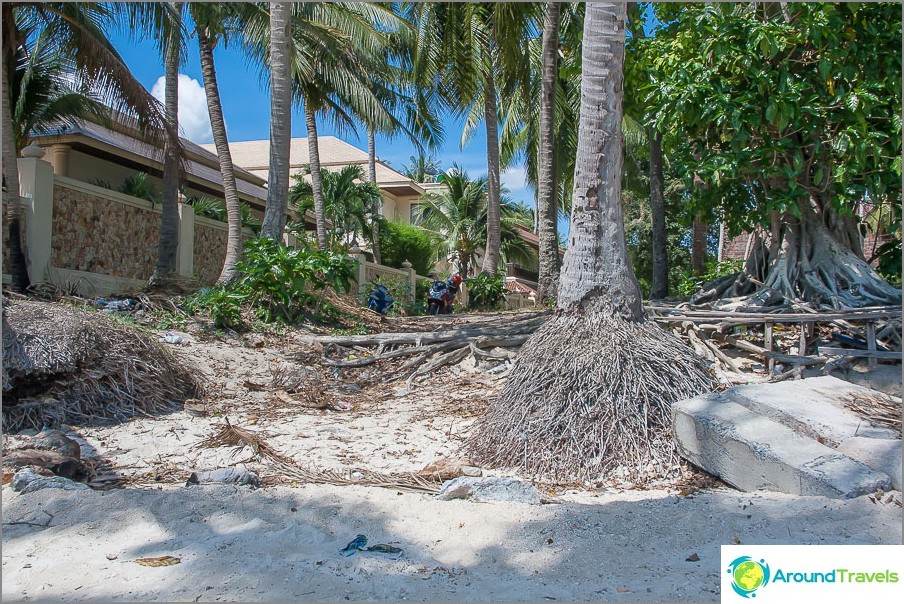 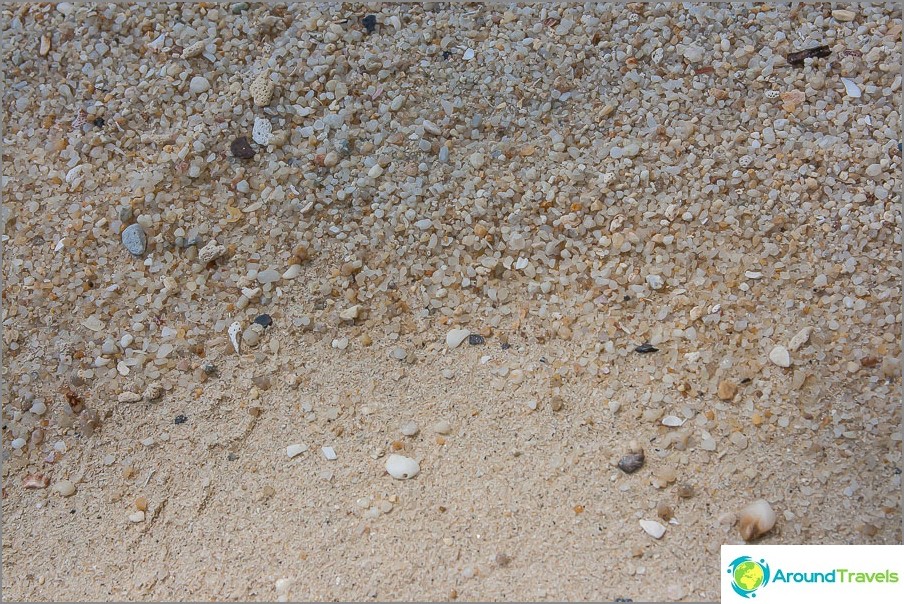 Taling Ngam is a truly remote area of ​​Koh Samui. On the secondary lanes, you can find laundries and Thai shops with a limited assortment, but the main purchases will have to be done in hypermarkets, by car. The nearest large store is Tesco Lotus on Lamai, to which 18 km, Big Sea and Macro - 30 km, Samui airport - 33 km.

It takes an hour and a half to get to the airport by car, if there are traffic jams on Lamai and Chaweng. On the beach there is a rental of kayaks and jet skis, you can also hire a boat for a boat trip or go snorkeling. And outside the beach, Taling Ngam has a number of interesting sights worth seeing: 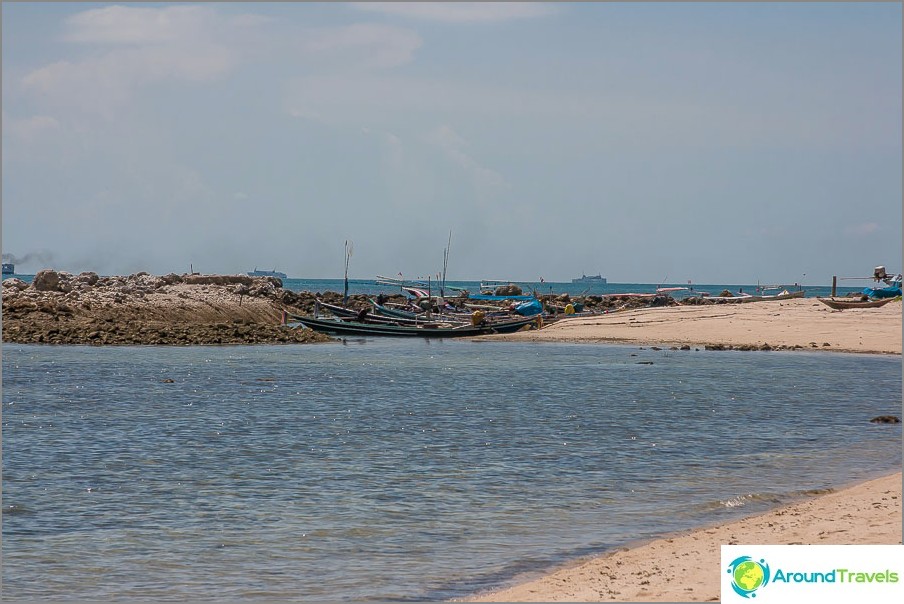 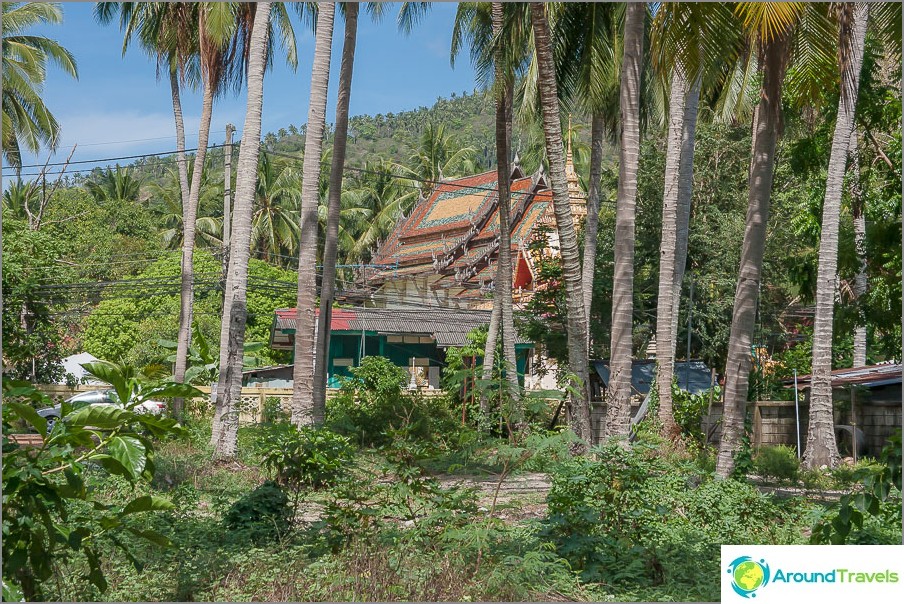 The Taling Ngama area is sparsely developed and is a large green area with reservoirs, industrial facilities, farms and fields. Accommodation is represented by a range of hotels and resorts scattered along the coast and inland. Large distances remain between groups of buildings. 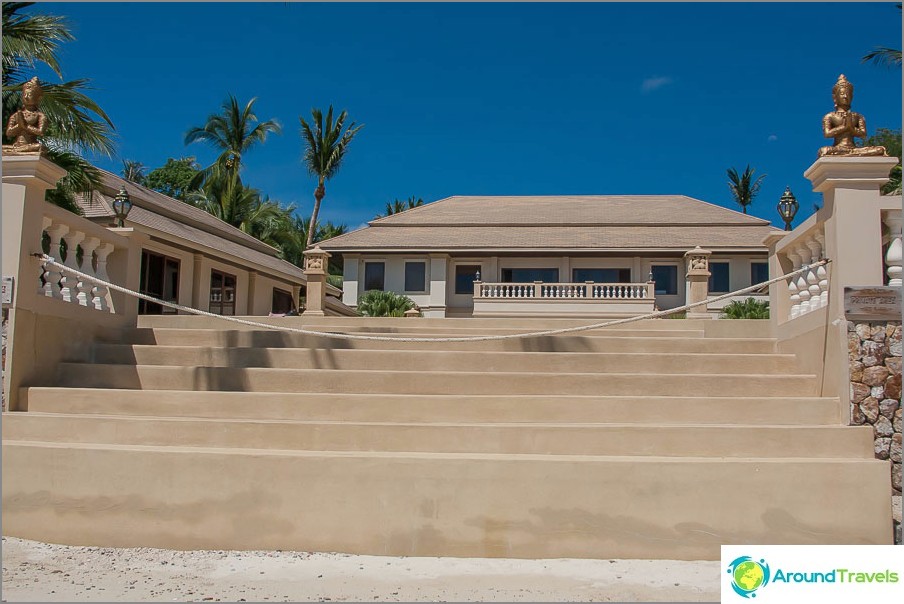 To find an exit to the beach 5 km long, there is no need for additional navigation, just come to the road that runs parallel to the coast and turn into any passage you like. A good place with a convenient entrance and beautiful landscapes can be found near the temple with mummified monk Wat Kiri Wongkaram.

To do this, turn off the ring road towards Taling Ngam onto road number 4170, and when you see the Elephant Gate, drive under it. In five minutes you will arrive at the temple, near which you can drop equipment and go ashore. 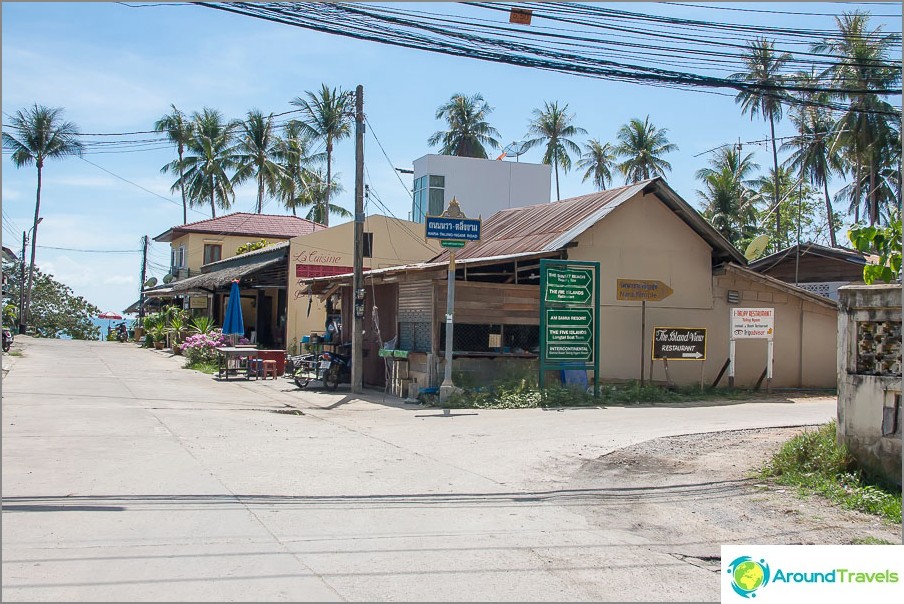 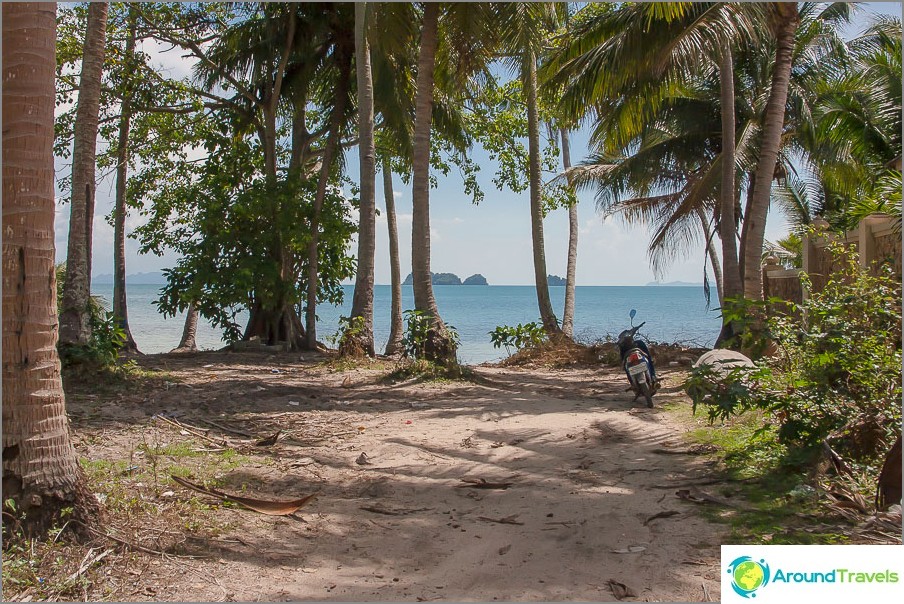 It is not yet a popular place, where independent tourists slowly began to visit. Taling Ngam has a stretch of beach that is accessible to pedestrians only at low tide. It starts 200 meters after descending to the sea past a restaurant near the Kiri Wongkram temple, the coordinates of which are higher.

After 200 meters of walking, you will have to jump a little over the stones, and walk along the sea, and somewhere after half a kilometer you will stumble upon small caves in the stone massif of the coast. The largest of them can accommodate two or three small people.. 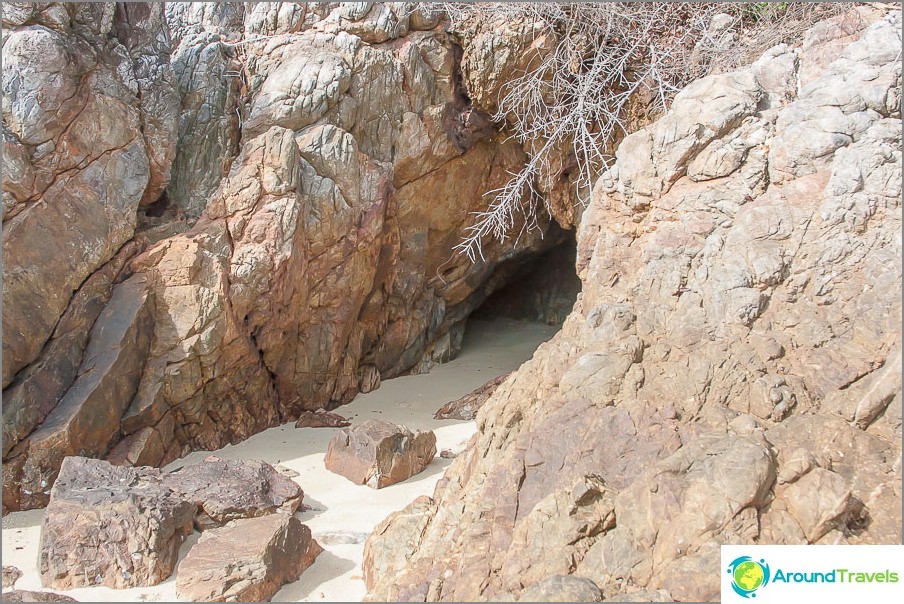 And after the caves there will be a completely empty and most deserted beach on the island.. 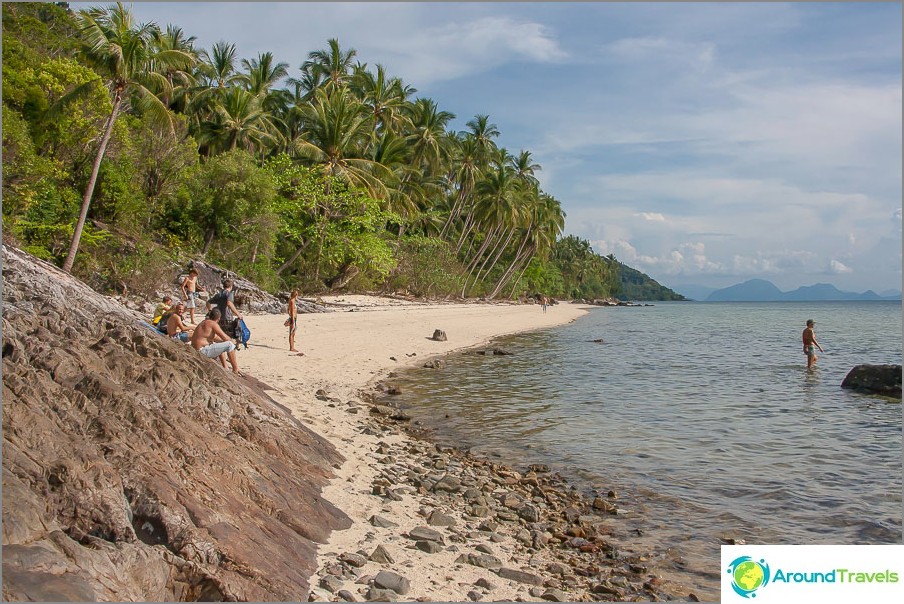