Unfortunately, we only stayed in Paris for 2 days. We spent the night at the hotel, then through couchsurfing, walked around the city and flew away from Orly. I can't say that I was really very impressed with the city, but the desire to come here for a week and calmly live in the center, having breakfast with croissants, remains. Hope we can do it someday.

There are many attractions in Paris and its environs, but in 2 or 3 days it is quite possible to have time to see the main, most famous and popular ones. And ideally, more time should be laid in the city..

For those who want to save time preparing for the trip and immerse themselves more fully in the atmosphere and history of the city, I would recommend using the services of an individual guide in Paris. In my opinion, individual excursions are much more interesting than organized excursions with their large number of people and a hackneyed program. Moreover, with a private guide, you can always agree on a convenient time and day and adjust the excursion.

Below are selected high-quality author's excursions, see if something will suit you. First of all, pay attention to the excursion «Walks in Montmartre», if you are short on time, and «Sightseeing tour One day in Paris». I liked the latter, it is convenient, in 7 hours you can see the most basic.

What to see in Paris

Among the main attractions in the world and one of the favorite tourist destinations in Paris, the Louvre is undoubtedly. The museum is located in the heart of the capital of France, on the right bank of the Seine. For the first time for the society, the museum building was opened on August 10, 1793. Among the most famous paintings of the Louvre are «La Gioconda» Leonardo da Vinci, «Lovely gardener» Raphael, «Little beggar» Murillo, «Self-portrait with thistle» Dürer and many others. The halls are decorated with sculptures of Venus de Milo, Nika of Samothrace and others. Of the three hundred thousand exhibits in the museum, 35,000 are presented to the viewer. At the entrance to the Louvre is the famous Glass Pyramid, which was designed by renowned American architect Bei Yumin and is the prototype the Pyramid of Cheops. 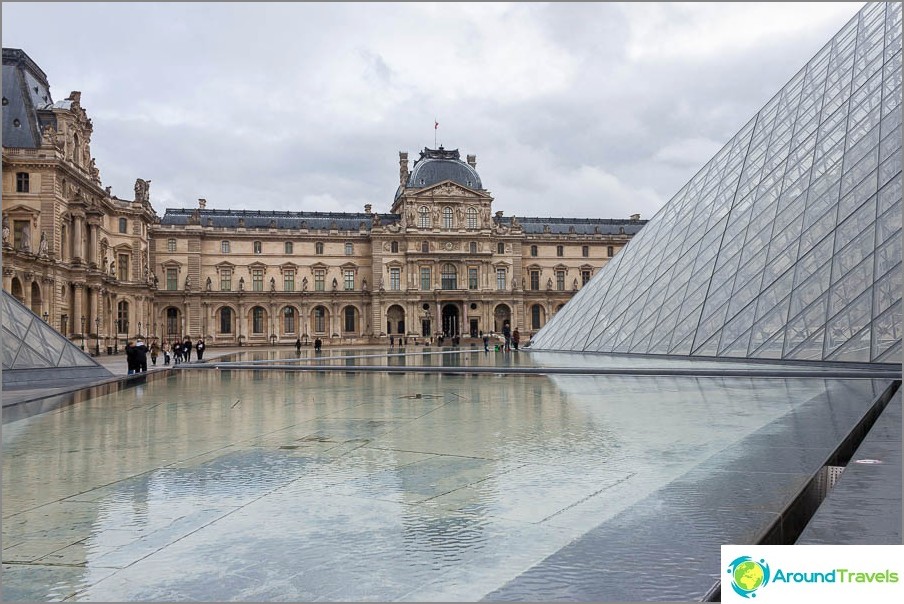 «Manhattan» Paris. La Defense quarter. This is an ultra-modern business district of Paris, which is located in the suburbs of the capital, in the Aux-de-Seine department. More than 20,000 residents live here in a residential area, and 150,000 employees from 1,500 different organizations come to work every day. One of the distinctive views of the quarter is considered to be the Great Arch of the Brotherhood, opened on the occasion of the bicentennial of the French Revolution. The name of the area comes from the name of the Monument to the Defense of Paris, erected in honor of the soldiers who defended the city in the Franco-Prussian War. A decade ago, EPAD Chairman Bernard Bled proposed a blueprint «La Defense 2006—2015», which involves the construction of three skyscrapers with a height of more than 300 m, as well as numerous offices and residential buildings. There is also a tower of 4,000 mirrored panels, which gives the impression of a mirage. And the squares and streets are decorated with unusual landscape compositions, statues and sculptures..

One of the most famous cathedrals in Europe is Notre Dame Cathedral, or Notre Dame de Paris, which is located in the very heart of Paris - on the Ile de la Cité. The eyes of numerous tourists are attracted by sculptures of saints and «gallery of kings» consisting of 28 figures of the biblical kings of Judea. A separate attraction is the two 69-meter towers, on the balustrade of which the famous chimera-gargoyles sit. This place is considered sacred because the famous Crown of Thorns of Jesus Christ is kept in the Cathedral Treasury. Over 14 million people visit this famous European monument every year. 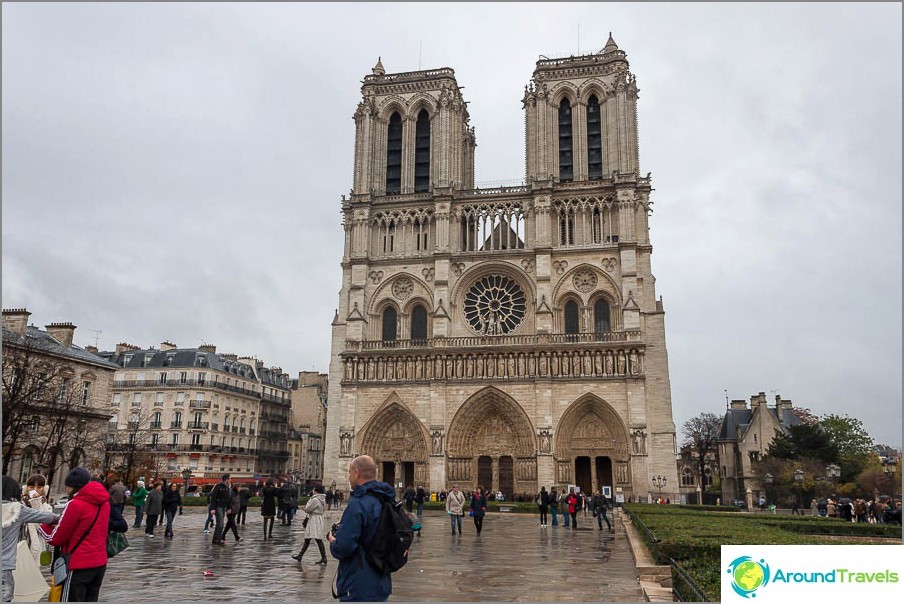 Pere Lachaise is one of the most famous necropolises in the world. 60 celebrities are buried here, who during their life had a huge impact on the development of science and art in France. In this place lie the French poet Guillaume Apollinaire, the writer Honoré de Balzac, the founder of endocrinology Claude Bernard, the professor of anatomy Joseph Ign? As Guillotin, the French actress Annie Suzanne Girardot, the famous banker James Rothschild, the Italian painter and sculptor Amedeo and the polish composer Clemente Mod. -virtuose Frederic Francois Chopin and many other celebrities. The famous cemetery is located in the east of the city, in the 20th municipal district of the capital. More than two million people come to honor the memory of great scientists and artists every year..

Among the many museums in Paris, one of the most famous is the Wine Museum. It was opened in 1984. The wine cellars of the museum, which were located on the site of the building, belonged to the Abbey of the 13th century, and the Minorite monks began to make wine in the ancient quarries. The length of the museum is about 1 km. The museum attracts tourists not only with a unique collection of wines from the best winemakers in France, but also with the wax figures of the monks who created this wine. Experienced guides here introduce visitors to the tradition of proper bottle uncorking, and also offer to taste rare varieties of French wines. The museum also displays wax figures of celebrities who are considered connoisseurs of this drink: Dionysus, Napoleon Bonaparte, Bacchus and Balzac.

One of the world's masterpieces of architecture is Versailles, or the Palace of Versailles, created almost four centuries ago. The Versailles ensemble, consisting of a palace and a park, is considered the pinnacle of architecture in the era of the development of absolutism and French classicism of the 17th century. The main attractions of Versailles are the main building of the palace with ostentatious luxury of bedrooms and halls, the Hall of Mirrors with 17 mirrors in gilded sculptures-lamps, the famous libraries and the theater, the oval hall of which is illuminated by 10 thousand candles. The Park of Versailles is a landscape composition framing the Museum of the Carriages, three wide thoroughfares, Armory Square with Ministerial wings and sculptures symbolizing the War («King's victories over the Empire and Spain»), and peace («Peace and abundance»), as well as the Royal Chapel, which served as the site of ceremonies for the rulers of France.

Of course, the most famous landmark in Paris is the Eiffel Tower. Thousands of tourists come to the capital of France every day just to see this magnificent 300-meter structure. The most visited here are three excursion floors: one of them houses a chic restaurant, and the other two are created so that visitors can admire the panoramic view of the metropolis. From 7 pm, the Eiffel Tower begins to glow and blink like a Christmas tree, giving the capital of France a special romantic charm. 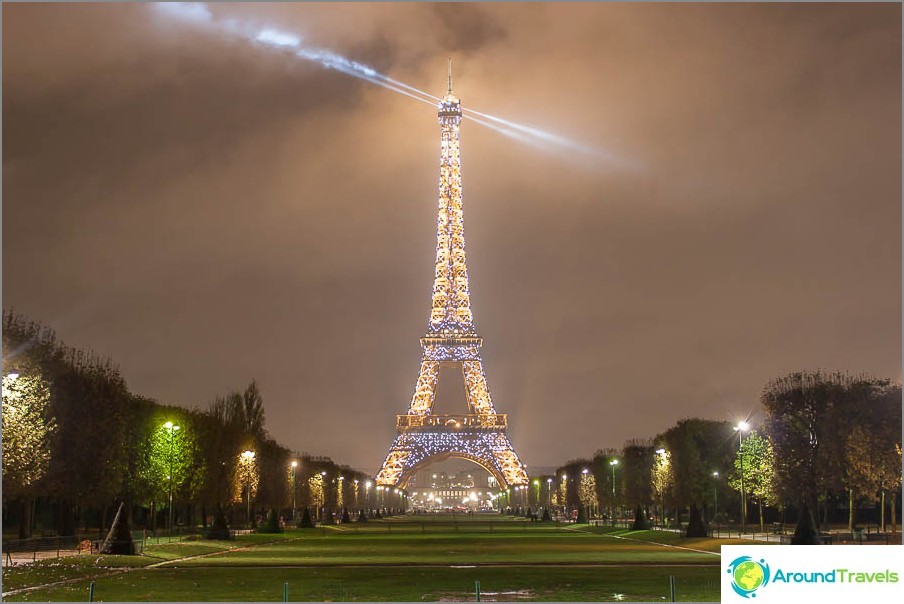 Majestic Albert Kahn. This is a small private garden, represented by a variety of compositional and color styles, which has been delighting not only ordinary tourists, but also true connoisseurs of garden art and professional florists for more than a hundred years. The garden was created by the famous philanthropist and banker Albert Kahn, who designed the landscape based on his impressions of travels around the world - America, Europe, Africa and Oceania. «Visual fairy tale» begins at the entrance to a stylized Japanese garden, covered with pink-red thickets of rhododendron, with a symbolic mountain «Fuji», created in 1988 by the Japanese landscape painter Fumiaki Takano. In an impromptu «Of Japan» you can find country tea houses, original lanterns, bridges and numerous trees and shrubs - bamboos, cherries, azaleas ... Following the Japanese garden, the entrance to the English garden opens, through which a picturesque English bridge on stone supports will be spread, there is a small lake and a collection of rare trees. The palmarium in the central part of the garden is represented by the prestigious landscape painter of those years, Ashil Duchenne. The delights of the garden of Albert Kahn also include the orchard-rose garden and «forest zone».

Disneyland Resort Paris, which was opened on April 12, 1992 and is located in Marne-la-Valais, can be distinguished from the newest attractions of Paris. The number of visits to this park increases its turnover every year and today it has about 13 million people a year. Disneyland Paris is represented by two theme parks: Disneyland Park and Walt Disney Studios Park, as well as the Disney Village amusement park, with many restaurants, shops and cinemas, a golf course, respectable hotels and even residential areas. The main symbol of Disneyland Park is considered to be the Sleeping Beauty Castle, around which 5 theme parks are grouped. The park impresses with the originality of its attractions: an adventure island with labyrinths, a pirate ship, a ghost house, a go-kart track with gasoline vehicles and many others. And there is also an attraction for fans. «Aerosmith» - roller coaster Rock ’n’ Roller Coaster.

One of the largest mosques in France, located near the Botanical Garden - in the 5th arrondissement of the Latin Quarter. The minaret of the mosque has a height of 33 meters and is made in the Spanish-Moorish architectural style. In addition to the minaret, the Great Parisian Mosque has its own school, library, prayer hall, and a hall for confessions. With the exception of closed sacred rooms, tourists can visit any hall of the mosque. There is also a teahouse on the territory of the Parisian mosque, where guests can enjoy mint tea and oriental sweets..