When you decide which hotel is better to relax in the summer, the main problem is to understand how far to walk to the beach from the hotel, what this beach will be like, and whether it will be paid / free. In this regard, it is hotels that are very convenient to book, since on the hotel page in the booking service you can always read reviews from real guests who will tell you the whole truth. We will omit the private sector with on-site search, this is a completely different format, I prefer to do everything in advance.

Since Sochi is a big city, you can still see my selections - Beachfront hotels and Hotels with private beach. Top rated and reviewed.

Where to stay in Sochi

Prices for hotels in Sochi go up very much during the season. In addition, cheaper numbers are quickly sorted out. The most expensive month is August. Below for each hotel is an approximate price per room in the summer season. The exact cost of the room for the dates you need is better to look at the links.

Surely you will not sit all day in a hotel or just lie on the beach. So take a look at my post - What to see in Sochi, there is a list of attractions where you can go or go. 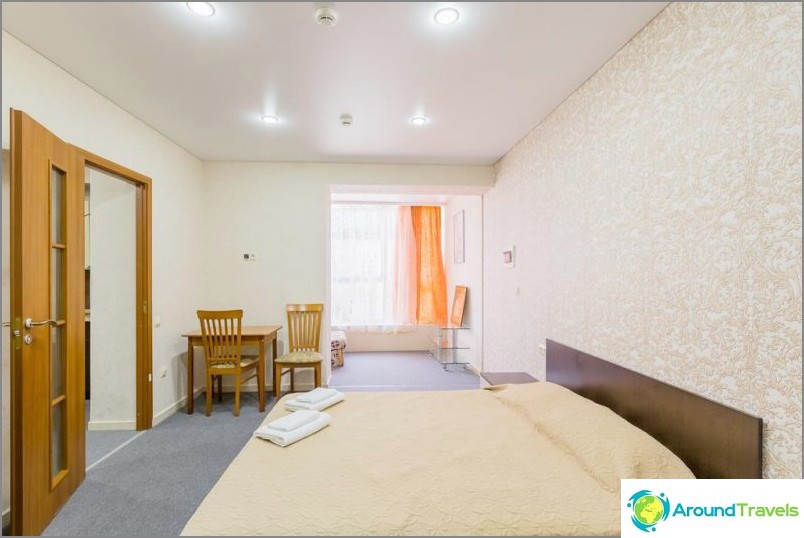 Cost: from 2000 rubles, depending on the season.

Affordable housing is literally a few minutes walk from the sea. Spacious living rooms, slightly cramped bathrooms, new interiors and furniture, air conditioning, satellite TV (if it matters to someone), free Wi-Fi and the hotel is also closed for the night - keep in mind. 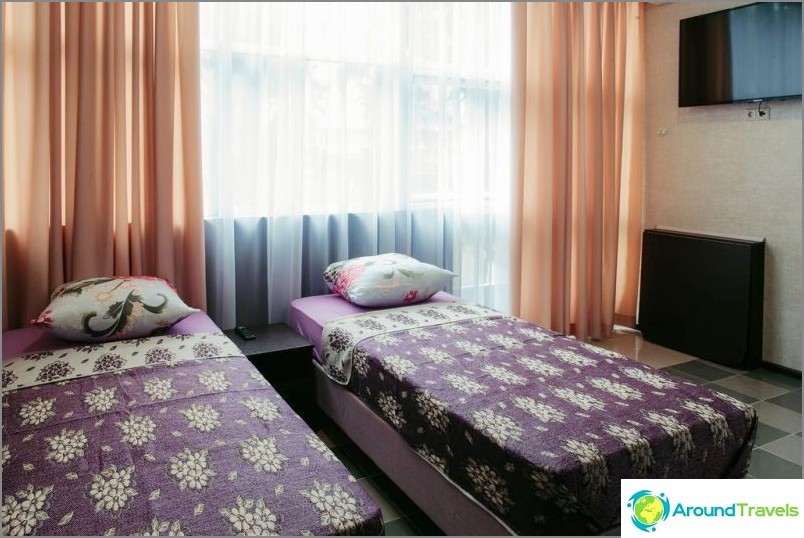 Cost: from 1500 rubles, depending on the season.

A relatively fresh hostel built in 13, which is located 15 minutes walk from the sea, although it will be faster by public transport. Riviera Park is just under a kilometer away. The rooms have private bathrooms and in some places they have managed to install kitchenettes with microwaves. Free Wi-Fi, toilet essentials (that is, not only toilet paper and towels). 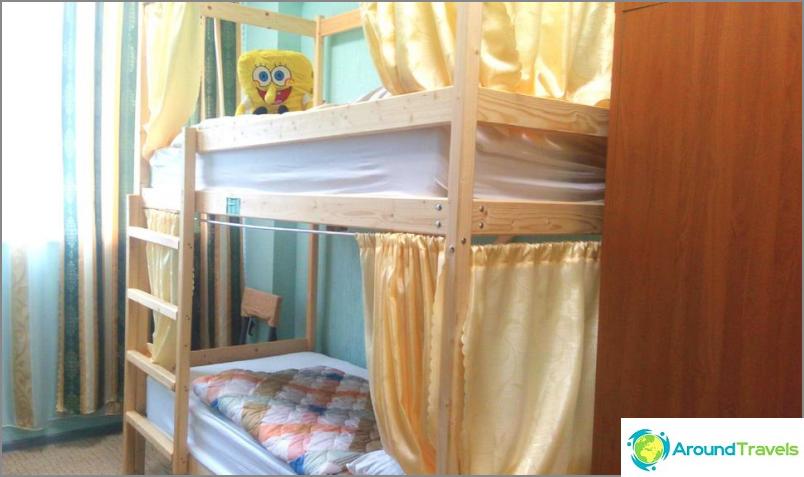 Cost: from 350 rubles for a bed in a common room and from 1800 rubles for a double room or for a family with a child and a shared bathroom

The hostel is located not very far (about 500 m) from the Sochi sea trade port, that is, almost in the city center. To the sea 10 minutes walk. One of the cheapest accommodation in Sochi. There is a pleasant atmosphere, calm, spacious, nice modern interior design. This hostel is highly rated by guests. There is a full kitchen where you can cook; washing machine. 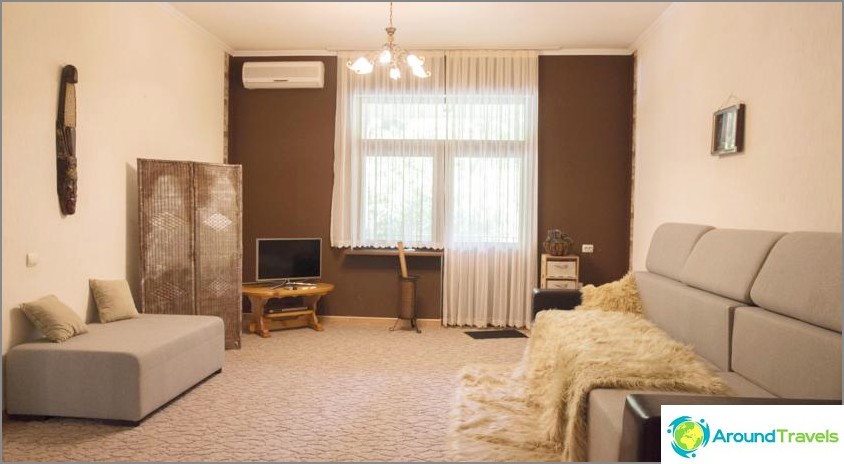 Cost: from 700 rubles for a bed in a common room and from 2500 for a double room with a shared bathroom

The hostel is located about 400 m from the sea, next to the Arboretum. Hostel Olympic has a very high rating, people like it there. There is an interesting option for accommodation - in a tent on the terrace overlooking the Arboretum. True, it will cost the same as a place in the common room. At the hostel you can order breakfast and dinner, cook deliciously. The owners of the hostel are friendly and sociable, they take it at home. Lots of nice details. For example, a projector in the yard and a hammock. In the morning, you can hear birds singing from the Arboretum, which is located right behind the hostel's fence. In general, the atmosphere is pleasant, well suited for young and sociable. 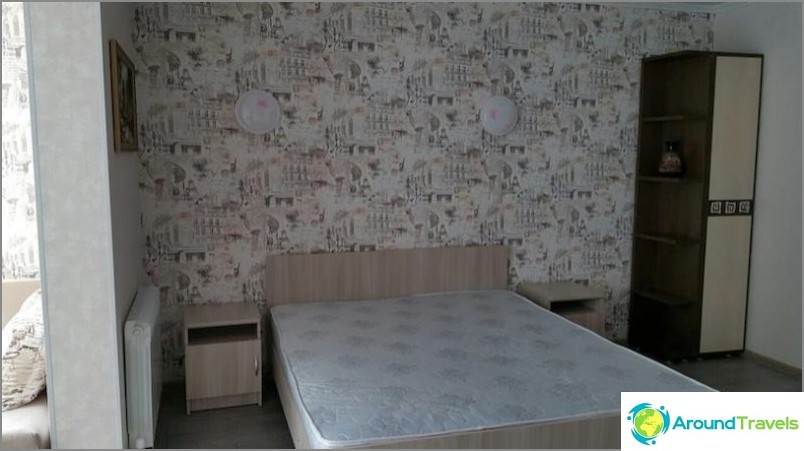 Price: from 2500 rubles per apartment

The residential complex was built 700 meters from parka «Riviera» and ten minutes walk from the Green Theater. The apartment is essentially a one-room open-plan apartment with a good sea view, Wi-Fi, and parking. There is everything you need for living and cooking, you can easily fit four of us on one living space. Good repair, the owner is constantly in touch to resolve emerging issues, but - far from the sea. Two stops by public transport. 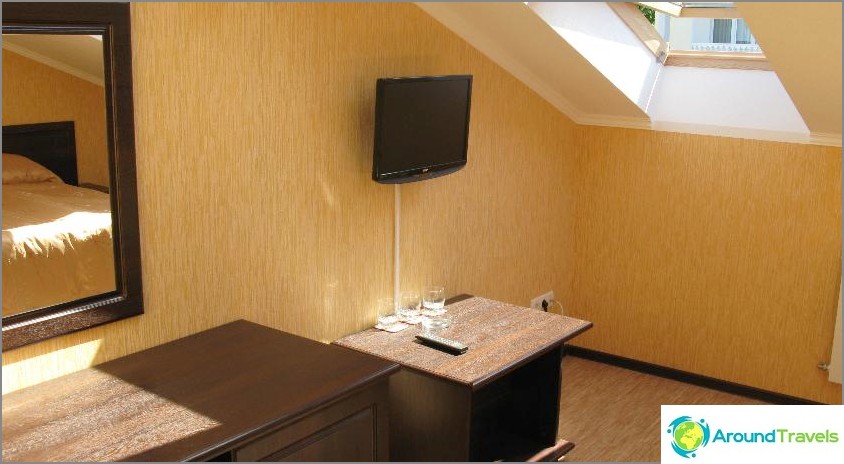 A cozy hotel, there are rooms with a good sea view, the owner is very attentive to the guests. True, the hotel is located quite far from the city center, but there are public transport stops nearby. The hotel is quietly clean, the rooms are spacious, with comfortable beds and utensils. There is a cooler (on the floor), on the street near the hotel there is a small terrace with a barbecue, where you can make a barbecue. 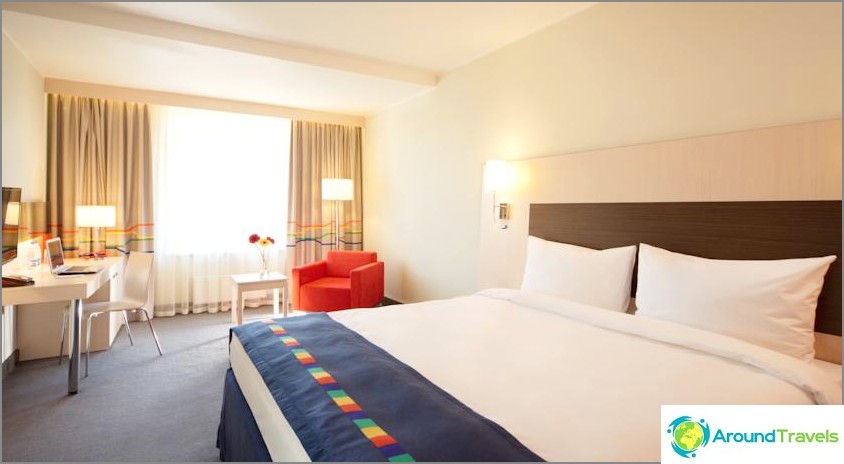 Price: from 6800 rubles for a family room

The hotel is located next to the railway station, so the rooms are quite noisy and far from the sea. A good option for those who need to spend the night closer to the train station. The hotel has good breakfasts, a gym, a restaurant. The staff is adequate. 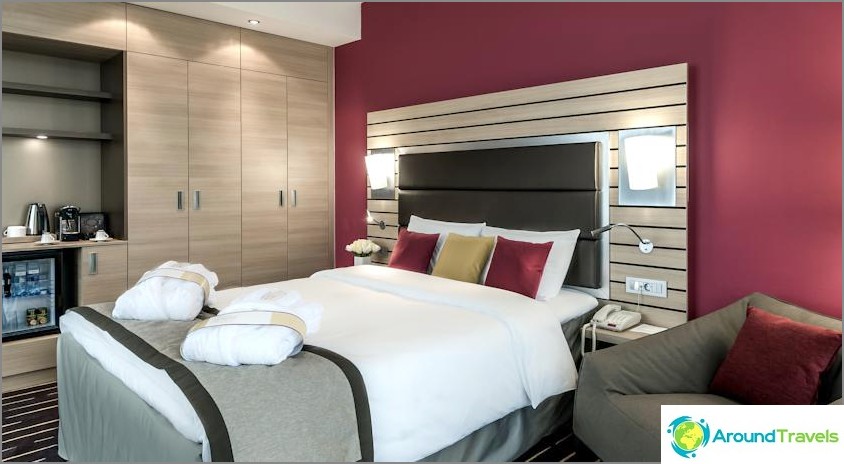 Probably the best hotel in Sochi from a more or less budget category. Although for the price it cannot be said that it is straightforwardly inexpensive ... But this is already the specificity of the Russian resort. Breakfast is included in the price, quite good. The staff is adequate (which, unfortunately, is not so often found in Sochi hotels). Of the minuses - there are no balconies, a paid swimming pool at the hotel and various minor household bugs. However, it strongly depends on the exactingness of the guest. But the hotel is well located. Main pluses - staff and location, breakfast. 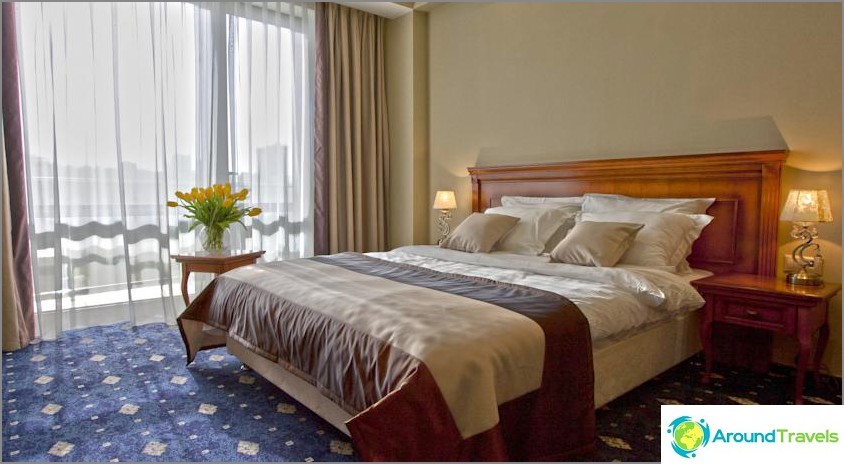 Price: from 7500 rubles for a family room

The hotel is located next to the Riviera Park, 15 minutes walk from the sea. The hotel has a private beach with free sun loungers, umbrellas and towels. The advantages of the hotel are cleanliness in the room, good pool, nice rooms. True, the hotel is quite noisy due to the traffic interchange under the windows. Actually no longer inexpensive to stop altogether, but added for the heap.

Where to stay in the vicinity of Sochi

The outskirts of Sochi or Big Sochi are a strip of land stretching along the sea, from Adler and almost to Tuapse. The villages that many have heard, such as Ashe, Lazarevskoye, Loo, Dagomys, Khosta, Kudpesta, Adler, etc. - these are all areas of Greater Sochi. Perhaps later I will make a selection of hotels in all villages, but for now, just a few pieces that I liked. 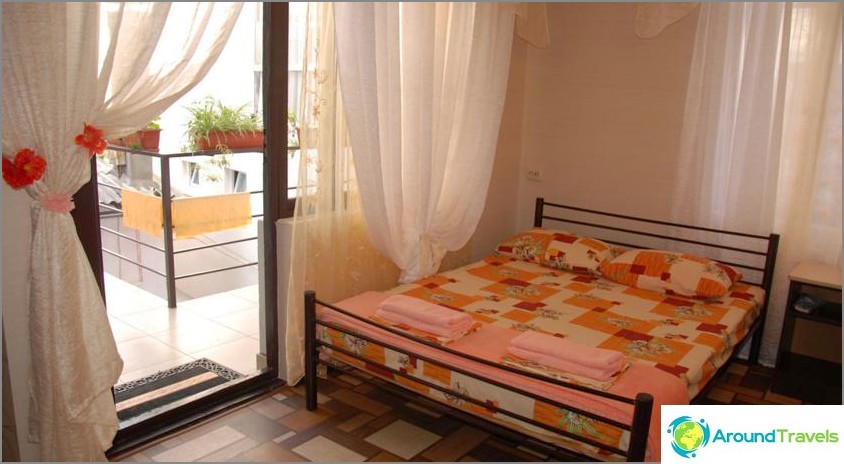 Price: from 1200 rubles for a double room

The small hotel Agat Inn is located in the resort village of Lazarevskoye, not far from the railway station and the park, practically on the seashore. This is not the most impressive hotel in terms of interiors and services available, but it is clean, quiet and very close to the sea. In Lazarevskoye, all of the above is not so common. The hotel rooms have air conditioning, TV, refrigerator. The good location of the hotel, almost in the very center, makes it possible to use the tourist infrastructure of the village. This is a good option where you can stay if you are relaxing with your child.. 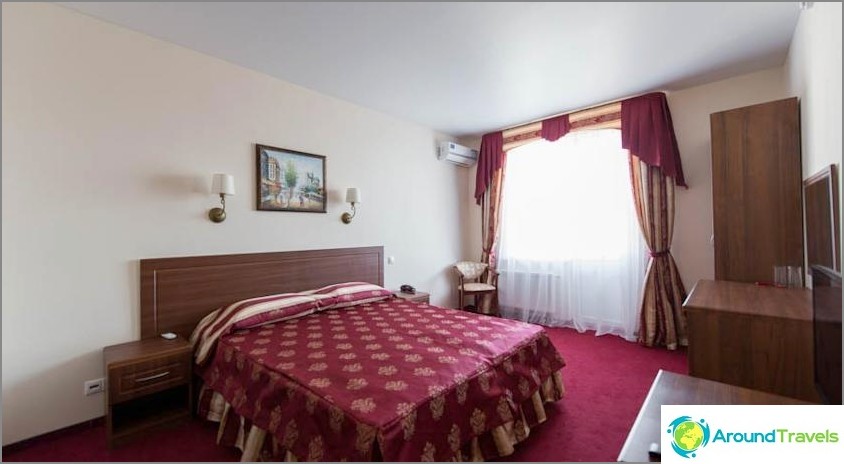 Price: from 3100 rubles for a double room

The hotel is located in the Matsesta area. There are railway tracks nearby, but this is a feature of this area. Decent comfortable rooms, delicious breakfasts are offered to guests. The main advantages of the hotel are its convenient location and pleasant staff. To the sea about 50 meters. Nearby there is an oceanarium, amfibius water park, public transport stop. In principle, the hotel is suitable for families with children, since it is close to the sea and there are interesting places around where you can go with your child.. 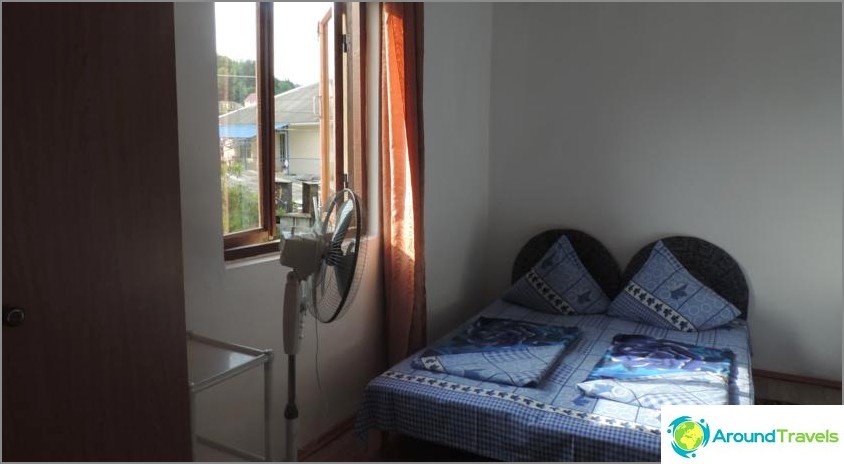 Cost: from 2400 rubles for a room for four or two people

Guest House «Dream» is located in the village of Vardane (between the two resorts of Greater Sochi - Lazarevskoye and Loo), just over half a kilometer from the sea and 22 km from the center of Sochi. Rooms can accommodate from 2 to 4 guests; there are rooms with a refrigerator, air conditioning and a bathroom, and more simple ones with a shower and toilet on the floor. There is also a shared kitchen, barbecue in the garden. Free transfer from the train station Loo. Some rooms offer mountain or garden views. A good option for families with children and rest with a large company. 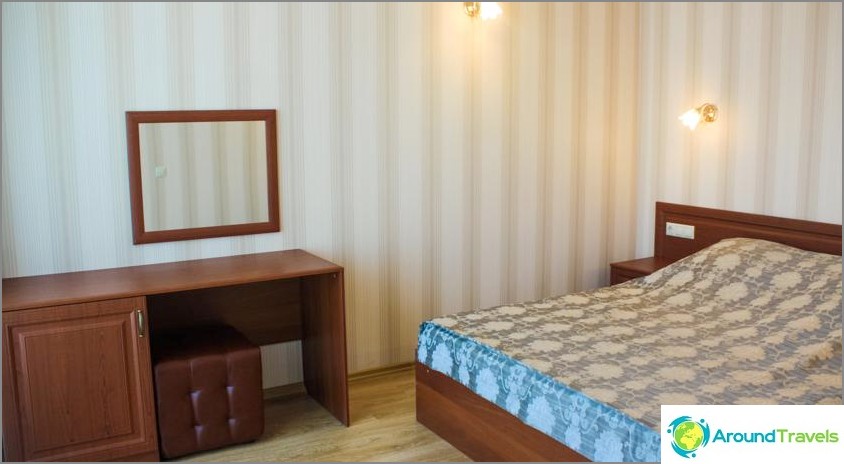 Price: from 2400 rubles for a double room

The complex is located in the Kudepsta area. A rare hotel in Sochi with such good staff reviews. Other advantages of EcoDom include a good and varied breakfast, the presence of a swimming pool and proximity to the sea. Rooms are clean and with everything you need for a comfortable stay. The rooms have air conditioning, balconies, small household appliances; for example a hairdryer. There is also a swimming pool with a section for children. Of the minuses - the railway track is nearby, but this applies in general to the entire coast in Adler. In terms of the sum of impressions, this is one of the best places that can be advised for families with children and family vacations..

Price: from 3925 rubles for a double room

The hotel is located in the Nizhneimeretinskaya Bay, near the Olympic Park. Nearby, on the one hand - Adler and the airport, on the other - Abkhazia. The hotel is well suited for a relaxing family holiday in the style of Turkish and Egyptian all-inclusive. Quite good buffet (breakfast and dinner), rooms are cozy and large, clean, service is quite on the level. The hotel has a swimming pool and a large area, its own beach.

Where is the best place to stay ...

Rest in Krasnaya Polyana in winter - ...