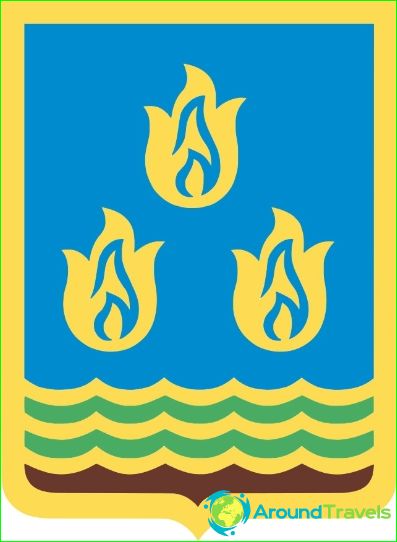 Located on the coast of the Caspian Sea in the southern part of the Absheron Peninsula, Baku is the capital and largest city of Azerbaijan, as well as the financial, industrial, cultural and scientific center of the country.

The results of archaeological research prove that settlements in the area of ​​modern Baku existed in prehistoric times. The exact date of the city's foundation has not yet been established. It is likely that during the Abbasid Caliphate, Baku, located at the intersection of important trade routes, was a fairly large trade center..

In the second half of the 9th century, the weakening of the central power of the Caliphate led to the creation of a number of independent states, including the state of the Shirvanshahs, of which Baku became a part. In addition to the strategically advantageous geographic location, the growth and development of the city, of course, was largely facilitated by the presence of oil fields and the climate. The inhabitants of the city were actively engaged in trade, crafts, gardening, fishing and oil production, and by the end of the 10th century Baku had become one of the most important cities of Shirvan and was known far beyond its borders..

In the late 11th - early 13th century, Baku flourished. During this period, massive defensive walls arose around the city, the reliability of which was strengthened by a deep moat. From the sea, the city had additional protection in the form of a powerful fleet, the development of which was given special attention. In 1191, the city of Shemakha (Shemakhi) was thoroughly destroyed as a result of a strong earthquake, and Baku temporarily became the capital of the state of the Shirvanshahs..

The invasion of the Mongols on the lands of Shirvan in the 13th century had negative consequences for Baku as well. After a long siege, the city fell and was ruthlessly destroyed and plundered. Trade declined, and oil production also stopped. Baku was able to restore its positions only by the middle of the 14th century. The 15th century became an era of colossal economic growth for the city. The palace complex of the Shirvanshahs built during this period has survived to this day and is an important historical and architectural monument and is included in the UNESCO World Heritage List.

In 1501, the troops of Shah Ismail conquered the city and Baku became part of the Safavid state. In the second half of the 16th - early 17th century, during the Turkish-Persian wars, Baku was under the control of the Turks for some time, but in 1607 the Safavids still managed to return Baku. The subsequent strengthening of the centralized power, the end of destructive wars and feudal strife served as an impetus for the further growth and development of the city..

By the beginning of the 18th century, the strategic position of Baku and its natural resources attracted more and more interest from the Russian Empire. By order of Peter I, who was striving to oust the Turks and Persians and become the full-fledged master of the Caspian, a special naval expedition was equipped, and after a long siege in June 1723, the imperial troops managed to capture Baku. Nevertheless, the confrontation with Iran continued and every year it became more and more difficult to preserve the occupied territories. In 1735, the Ganja Peace Treaty was signed between the Russian Empire and Iran and Baku was again under the control of the Persians. In the middle of the 18th century, several khanates were formed on the territory of modern Azerbaijan, including the Baku Khanate with its center in Baku..

In 1806, during the Russian-Persian wars (1804-1813), Russian troops again occupied Baku. After the signing of the Gulistan Peace Treaty in 1813, the Baku Khanate officially became part of the Russian Empire. True, this treaty did not resolve all the contradictions and in 1826 a new conflict broke out between Russia and Iran, the end of which was put by the so-called Turkmanchay Peace Treaty (1828), after the signing of which the military confrontation finally ended and the region began to develop rapidly. Baku, on the other hand, became the center of the Baku district, within which it was later included in the Shemakha province. In 1859, after a strong earthquake, the Shemakha province was abolished, and instead of it, the Baku province was created with the center in Baku. By the end of the 19th century, Baku became one of the largest industrial, economic and cultural centers not only of the Caucasus, but of the entire Russian Empire, and later the USSR.

1988-1990 Baku became the epicenter of the Armenian-Azerbaijani conflict, which peaked in January 1990 and went down in history as «Black january» («Bloody january»).

In 1991, after the collapse of the USSR, Azerbaijan became an independent state, and Baku was its capital. Today, the city, which has recovered from the protracted economic and social crisis of the post-Soviet period, has been radically transformed and is experiencing «its renaissance».