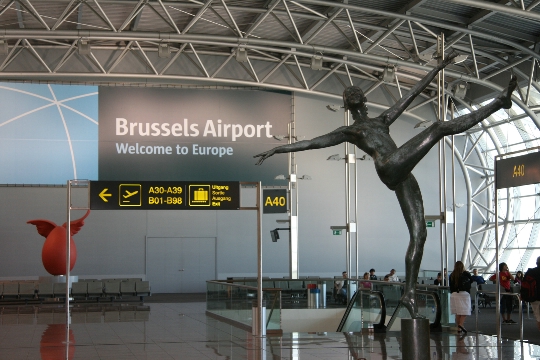 Visiting Belgium and tasting its famous chocolate is a great idea for a short getaway or vacation. Usually this country goes "in conjunction" with others on sightseeing tours in Europe, but Belgium airports allow you to take a solo voyage here..

Among the airports with such a status, the capital city is popular among the Russian tourists. In addition, you can get to the country by landing in other air ports:

Belgium's airport in the capital of the country is the most popular among travelers. It is located 8 km from the city center and is connected to it by an electric train and fixed-route taxis. Trains leave every 20 minutes and after a quarter of an hour, tourists arrive at Brussels Central Station.
You can fly to Belgium from Moscow every day from Sheremetyevo using the services of Aeroflot or Brussels Airlines. Travel time will be less than 4 hours.
The small town in which the capital's airport is located is called Zaventem. This country air gate was awarded the title of the best in Europe in 2005.
All airport facilities are located in a single terminal. There is a railway station on the ground floor, arrivals are on the second level, and departures are from the third floor of the terminal. Two piers in the departure hall separate the main passenger flows:

Wireless Internet is available free of charge for half an hour, after which you will have to buy the right to enter. Duty-free shops are located in various areas of the terminal, and those who wish to wait for a long connection are comfortably provided by a modern hotel opposite the entrance to the terminal building..
Airport website - www.brusselsairport.be.