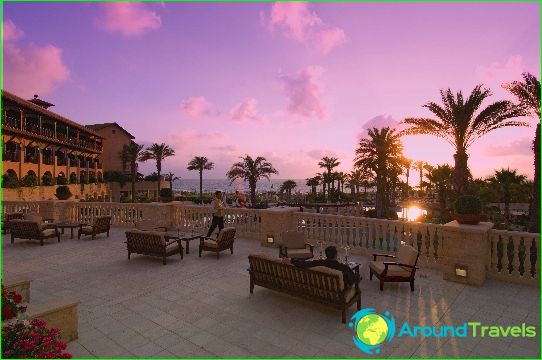 This Cypriot city is especially popular with respectable and wealthy travelers, because the rooms in its hotels are not cheap, and you will not find the usual beach animation and children's entertainment here at all during the day with fire. On the other hand, travelers to Paphos can enjoy impeccable service in first-class hotels and the best local cuisine on the island. The last argument may seem very controversial to catering workers of other Cypriot health resorts, but the most titled restaurants are still open here..

The religious cult of the goddess of love and beauty of the ancient Greeks led to the fact that they not only built temples in her honor, but also founded entire cities. The westernmost resort on the island, Paphos is no exception and its appearance is entirely associated with the cult of Aphrodite. Moreover, the participant of the Trojan War, Agaperon, who laid the first stone in the foundation of modern Paphos, firmly believed in an ancient legend. According to the stories of his ancestors, it was from the local sea that Aphrodite was born, and therefore a majestic temple in her honor was erected on this land..
Since the beginning of its existence, the city has received many monumental structures. Fortresses and temples, basilicas and palaces were built here. Tourists to Paphos can visit the necropolis of the Tombs of the Kings of the 4th century BC, the Byzantine church of Panagia Theoskepasti of the 10th century, and the old temple, with a pillar, at which the Apostle Paul was scourged. An interesting excursion is also offered to the place where Aphrodite emerged from the sea. Having bathed there, everyone gets a few years younger and feels an unprecedented surge of love for their neighbor..