Home › Articles about Cyprus › Taxi in Cyprus - prices, order. How much does a taxi cost in Cyprus

Taxi in Cyprus - prices, order. How much does a taxi cost in Cyprus 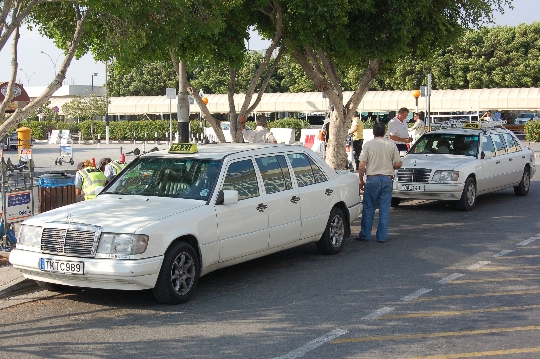 The inhabitants of the beautiful island in the Mediterranean Sea know a lot about rest, so no tourist will be left without attention and care. This applies to literally everything - from the moment of meeting at the airport to the moment of farewell to the sea. Taxi in Cyprus is also subordinated to a single goal - to satisfy the desires of the client quickly and easily get to the right place..

In Cyprus, as in most European countries, two tariffs replace each other during the day. The nightly rate starts at 20.30 (pretty early, as tourists say) and continues until 6.00 in the morning. At this time, the cost of transportation increases by 15%. To the great delight of tourists, this rule does not apply to baggage transportation..

You can use a Cypriot taxi anywhere: in the parking lot, order with the help of the hotel administrator, call from any phone available in a restaurant or shop. And even stop in the street.

Most of the tourists use the plane to get to Cyprus, they get to the airports of Paphos or Larnaca. If there is a need to get, for example, to Limassol, then there are two options: a bus (fare 9 EUR) and a taxi, which will take you to the city much faster, but the fare will also be much higher - within 60–70 EUR. This is exactly how much a company of four passengers will have to pay in the daytime, if 6 people are going to go, then the cost of the trip increases.

In Cyprus, too, there is competition between individuals and state-owned companies that have received licenses to carry passengers and luggage. The former are much more accommodating, willingly make concessions, lower fares.

A trip by a state taxi will cost more, but there are security guarantees, since cars are regularly checked and the drivers are only highly professional. Plus, they have insurance and fixed rates..

Many of the companies take into account the fact that many Russian-speaking tourists come to the island to rest. Therefore, knowledge of the Russian language by a driver is crucial for companies. They also take into account that Russians come in large companies, so they offer a transfer for groups of 4 to 10 people. The calculation is made not by mileage, taking into account landing or export, but along the route. There are main directions connecting airports, resorts with the capital and other cities; the carriers' websites indicate fares for passengers.

Photos of taxis in Cyprus