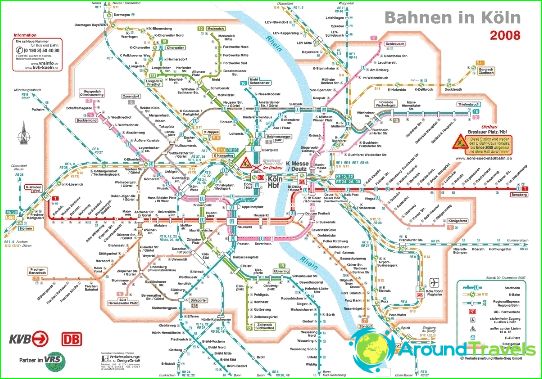 In the German city of Cologne, among other types of public transport, there is a high-speed tram system - metro tram. Working in conjunction with the city electric train Rhine-Ruhr, the metro is part of the association «Rhine-Sieg».
The beginning of the construction of the Cologne metro system dates back to the end of the 19th century, when the horse tram began operating in the city. Then the first electric lines appeared, the routes of which ran not only through the city center, but also to its outskirts. The increase in traffic intensity in the second half of the twentieth century required the city authorities to solve the problem of traffic jams. In 1963, construction of the first underground tunnel began in Cologne.
In Cologne's modern metro system in the city center, trains run underground on most routes. On the outskirts of the city, land rails are most often built. Interchange stations look typical, like the subways of other countries of the world. Metro lines cover the main areas of the city, and two of them connect Cologne and Bonn. The entire Cologne metro network has 11 operating lines, on which more than 350 stops on routes and stations are open for the needs of passengers.
Tram cars can accommodate up to 70 passengers each, and the trains are linked from two cars. The platform heights differ from station to station. In one case, passengers have to climb the steps to enter the car, in the other, the train is entered from the platform level. The trains are powered by patnographers on the roof of the cars. The average speed that Cologne metro trains develop is about 80 km per hour..

The first passengers of the Cologne metro are accepted at five o'clock in the morning, when trams start to run. The metro tram ends around midnight. The interval of movement of trains on routes does not exceed two minutes.

Photos of the Baltimore metro