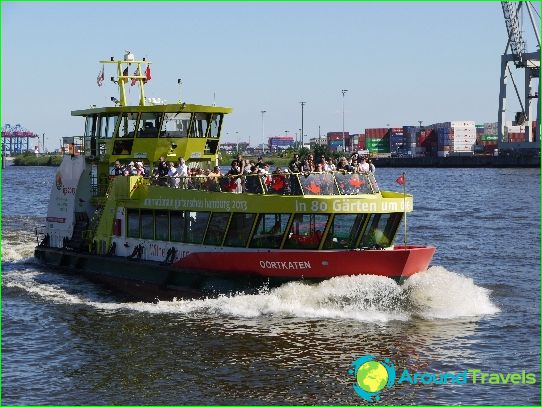 Tariff zones of the transport system in Hamburg

Hamburg, like other major cities in Europe, is divided into several tariff units. This division is the basis for the development of routes and the formation of pricing policy. Hamburg consists of five transport loops that diverge from the city center. It is customary to divide tariff rings into several zones. Zones A, B are part of the Greater Hamburg Zone. There is a network of metro and electric trains on this territory. Zones C, D, E cover remote areas and surroundings of Hamburg.

Transport in Hamburg works smoothly and allows you to get to any desired place in the shortest time, but it is recommended to carefully consider the route.

Hamburg has over 600 bus routes during the day and 29 at night. It is important to note that night routes operate from 24.00 to 05.00. During the day, the interval of movement is from five to ten minutes, and on the busiest routes - up to two minutes. At night, buses run every 30 minutes. Most of the stops have information boards that allow you to get acquainted with the current timetable..

It is compulsory to pay for the bus fare, because tickets are checked by controllers, and after nine o'clock in the evening - by drivers.

The underground has been operating in Hamburg for over a century. The first stations were opened in 1912. At present, there are three lines with a total of 89 stations. During rush hour the interval is 2.5 minutes, and at other times it is 5-10 minutes. The metro operates from 4.30 to 00.40. On the night from Friday to Saturday, as well as from Saturday to Sunday, the metro continues to operate at intervals of 20 minutes.

The fare can be paid at the ticket offices, which are located at the stations. In addition, it is possible to buy tickets from vending machines located in front of the entrance and on the platforms. There are no turnstiles in the Hamburg metro, and passengers are checked by controllers. You will need to pay a fine for free travel, and if you try to refuse, the police may be called. Refusing to pay and calling the police can lead to blacklisting, making it impossible to obtain a Schengen visa.

In Hamburg, the city train is considered the second metro, as most of the lines run within the city limits. Currently, the number of stations is 68. The train operates from 04.30 to 01.00 on weekdays, on weekends and holidays - around the clock. Remember about the obligatory composting of tickets, because only after this procedure they can be considered valid.

Motor ships and ferries with affordable prices run along the Elbe and all city canals.