Articles about Delhi
by Ashley 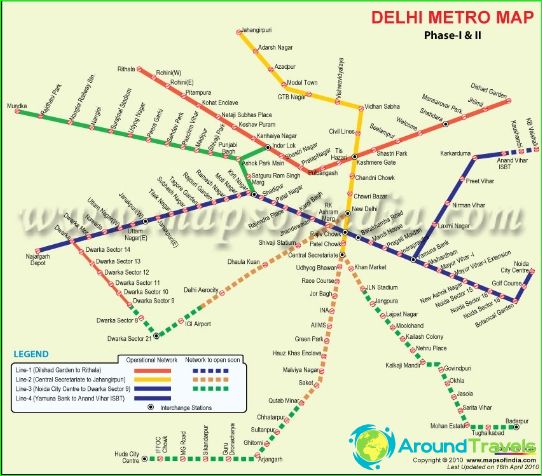 Delhi Metro is the thirteenth metro in the world in terms of total length of lines (190.0 km). It is the main transport of the capital of India, as of September 2013, consisting of six main lines and the Airport Express line, serving 141 stations (135 metro stations and 6 Airport Express stations), of which 35 are underground, five are on the surface, the rest are above earth. All Delhi metro stations have escalators, elevators and tactile signs for visually impaired passengers.

The Delhi Metro operates daily from 06:00 to 23:00 with train intervals of 2 minutes 40 seconds during peak hours. The average number of flights is more than 2,700 per day, which makes it possible to carry about 2.4 million passengers per day. Trains usually consist of four and six carriages, but due to the increased load, on some branches they reach eight. As of August 2010, the Delhi Metro has carried over 1.25 billion passengers since its inception..

Metro planning began in 1984 when the city received a proposal to develop a multimodal transport system for the city. The Government of India and the Government of Delhi announced the start of construction in 1998, and the first metro line opened in 2002, the second (yellow line) opened in 2004, the blue line in 2005, and the green and purple lines in 2010. The Airport Express started operating in 2011. Metro announcements were recorded by renowned announcers: Rini Simone Khanna and Shammi Narang.
Delhi recently opened the Yellow Line Light Metro, which has metro tickets. But the city's transport system still needs to be expanded, as between 1981 and 1998 there was a twofold increase in the population and a fivefold increase in the number of vehicles..