Articles about Yaroslavl
by Audrey 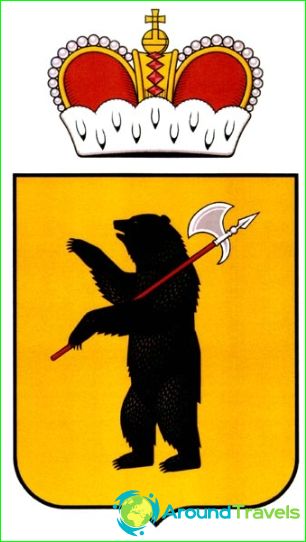 Coat of arms of Yaroslavl

The city of Yaroslavl is located on the high bank of the Volga, at its confluence with the Kotorosl River. In ancient times, this place was the settlement of Medvezhy Ugol. The Finno-Ugric tribes and Meryans lived in this village, and the Slavs appeared a little later. The villagers worshiped the bear - the owner of the northern forests.

The location of the settlement was very convenient. By the river Kotorosl one could get to Rostov the Great, a large center of Ancient Rus. Prince Yaroslav the Wise, who ruled Rostov, decided to build a small fortress on this place, which he did in 1010. The legend about the founding of Yaroslavl served as the basis for the creation of the coat of arms of the city depicting a bear with a trident or ax.

For two centuries Yaroslavl remained a small town located on the border of the Rostov-Suzdal land. But already at the beginning of the XIII century, stone churches appeared in the town, and the first church school in the north-east of Russia was opened, later transferred to Rostov the Great. In 1218 Yaroslavl became the capital of the Yaroslavl principality. In the middle of the XIII century, Yaroslavl suffered more than once from the raids of the Tatar-Mongols.

In the XIV century, the Yaroslavl princes entered into an alliance with Moscow, and soon the principality was included in the Russian state. In the middle of the 16th century, after the conquest of the Kazan Khanate, trade along the Volga brought great profits, and Yaroslavl became a major trade center with the northern Kholmogory and the northeastern lands of the Stroganov merchants, rich in furs and salt..

In the 17th century, during the Troubles in Yaroslavl, most of the wooden buildings burned down. Stone construction is taking place in the city. In 1612, it was from Yaroslavl that the militia of Minin and Pozharsky left for the liberation of Moscow.

The seventeenth century is the golden age in the history of Yaroslavl. It becomes the second after Moscow in terms of the number of inhabitants and stone churches. By this time in Yaroslavl there were already wonderful monuments of architecture, such as the Transfiguration Monastery, the Church of Elijah the Prophet and the Church of John the Baptist in Tolchkov.

The 18th century was not easy for Yaroslavl. Peter I banned trade through Arkhangelsk. The city is undergoing restructuring. Trading capital is channeled into the creation of industry. Under Elizabeth, the daughter of Peter I, the first national theater in Russia was founded in 1750, headed by F.G. Volkov.

Catherine II, after traveling along the Volga, noted that Russian cities are beautiful in terms of their situation and bad in terms of development. Yaroslavl becomes the center of the province, headed by A.P. Melgunov. He approved a new regular development plan for the city, straightened the streets, allocated the administrative and commercial districts of the city; at the same time, the old temples were not destroyed, but freed from the surrounding wooden buildings.

At the beginning of the 19th century, M.N. Golitsyn. He opened the first higher educational institution in the city - the Demidov Lyceum. Industry developed rapidly in the city. In 1870, a railway was built to Moscow. In 1913, the first railway bridge across the Volga was built.

The beginning of the 20th century was not very successful for Yaroslavl. During the 1918 Socialist Revolutionary rebellion, a significant part of the city center was destroyed. Churches were damaged, the building of the Demidov Lyceum was destroyed. In the 1930s, a large number of churches were demolished. At the same time, industrial giants appear.

The Great Patriotic War accelerated the development of heavy industry in Yaroslavl, but constant bombing raids damaged the city. In the post-war period, new industrial enterprises and an automobile bridge across the Volga were built in the city. Housing construction begins on the left bank of the city.

In 2010, a holiday dedicated to the millennium of the city was held in Yaroslavl. The city has been preparing for this celebration for a long time, many cultural monuments have been updated and restored. Old Yaroslavl on the banks of the Volga always pleases and surprises tourists and residents of the city with its beauty.