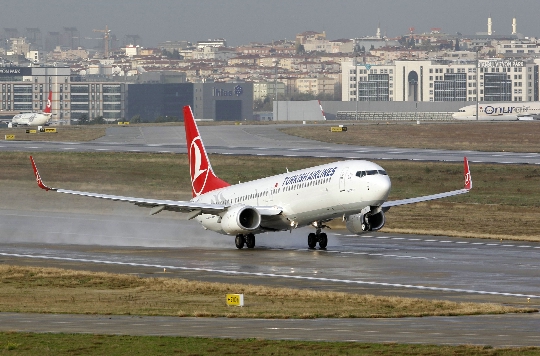 Among all the tourist destinations mastered by Russian travelers, Turkey is perhaps the most popular. People fly here for a beach vacation, here they strive to plunge into the turbulent whirlpool of the old streets of Ankara and see the Bosphorus, which connects the shores of Asia and Europe in Istanbul. Turkish airports receive hundreds of planes every day, displaying impeccable, accurate performance and enviable hospitality.
Regular flights and charters fly here from Russia. Travel time is from 2.5 to 4 hours, depending on the chosen direction and air carrier. Through Istanbul you can get from Moscow to any regional airport in the country, and Aeroflot daily and directly connects the Russian capital with the Turkish beach - Antalya.

Several air gates have the right to receive aircraft from abroad in Turkey:

The capital airport of Turkey and Ankara are separated by 28 km, which are most easily covered by taxi (the cost of the trip will be about 70 liras) or public transport. Bus route 442 runs from 6 am to 11 pm and delivers passengers to the intercity bus station in the center of the capital.
More than a hundred check-in counters allow you to reduce the time to prepare for departure, and the modern airport infrastructure will not let you get bored while waiting for boarding a flight..
Airlines, whose planes frequently appear on the tarmac, are the most popular carriers in Europe and Asia. Flights to Ankara are on the schedules of Lufthansa, Qatar Airlines, Royal Jordanian, Scandinavian Airlines and others. The capital is connected with the domestic airports of Turkey by Turkish Airlines flights.
Details - www.esenbogaairport.com.

In honor of the first president

The largest Turkish airport in Istanbul is named after Mustafa Kemal Ataturk. Of its three terminals, the second is responsible for international service, from where the easiest way to get to the city is by trains of the M1 metro line. The way to the center will take about half an hour. Buses leave every 30 minutes from the stop at the terminal exit to Taksim Square and Aksaray. Taxis are available around the clock.
Russian travelers can get to Istanbul on the wings of a Turkish carrier and Aeroflot from Moscow, Donavia from Sochi and Rostov-on-Don and Russia from St. Petersburg.
Planes of the absolute majority of European and Asian airlines fly to the largest airport in Turkey, and Air Canada represents the Western Hemisphere on its field.