Airport in Antalya: scheme, photo. How to get to Antalya airport

Articles about Antalya
by Ashley 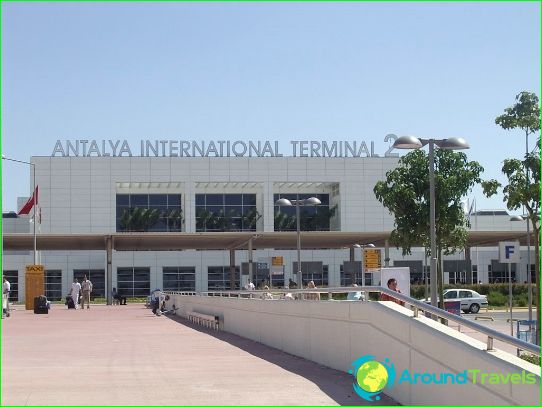 Antalya is one of the main resort regions in Turkey. About 10 km to the East of the city is the Airport, which annually receives a huge flow of tourists who want to relax on the Mediterranean coast of the country. The flow of passengers is more than 19 million per year, with about 80% of them tourists from other countries. Antalya Airport has 3 terminals, two of which are international and one domestic. There is also a separate CIP terminal, which provides the most comfortable stay for business class passengers..

The airport in Antalya is in no way inferior to other large international airports. Here passengers can contact the information desk with any question of interest. It should be noted that the staff speaks several languages ​​- Turkish, English, German and Russian. In addition, in terminals 1 and 2 in the departure hall there are information kiosks that allow you to ask a question of interest using video communication.
For tourists with children, there is a mother and child room at the airport, as well as a special playground located in the second terminal..
The airport also offers tourists to use luggage carts for free, which are located both in the terminals themselves and in the parking area. Paid services include - baggage packing and luggage storage.
If necessary, passengers can use medical services.
On the territory of the airport there are offices of various banks, as well as ATMs for cash withdrawals. In addition, the tourist can exchange currency at the exchange office.
And, of course, there are Duty Free shops in the airport terminals, which offer a wide range of goods. You can also grab a bite to eat in numerous cafes and restaurants..

There are several ways to get from the airport in Antalya to the city, the most popular of which is public transport. You can also rent a car.
Buses leave every half hour from the local and second terminals and pass through the city center. The final stop is the bus station. The ticket price will be approximately $ 3, and the travel time is one and a half hours.
A little further there is a taxi rank. Taxi services are available to tourists around the clock. It is worth noting that the price for a trip at night may be higher than during the day.