Banana Beach, or as it is sometimes called by the old-timers - Banana Rock Beach, is hidden on the west coast of Phuket, between the beaches of Layan and Knighton, in a cozy bay at the base of the mountain.

Due to its location, hidden by the relief and jungle from the casual eyes of tourists driving along Route 4018, Banana Beach has long remained a secret paradise for lovers of seclusion and nature in its original form. Now times have changed, and the beach repeated the fate of Maya Bay on the Phi Phi Islands.

Closed on both sides by rocky headlands that do not allow access to the beach along the coast, and behind the bay - by a mountainside, Banan Beach was and remains not the most accessible beach in Phuket, but at the same time - one of the most popular. There are a couple of paths leading from the road to it, near one of which there is even now a parking pocket for transport.

And now from the sea, taxis and boats regularly arrive here, so from 10 o'clock in the morning a massive influx of tourists begins here. I would recommend coming here at 8-9 am, then you will have time to find a couple of hours of silence and free space.

Banana Beach is ideal for swimming and relaxing on the beach. The coast does not have steep drops, except for the rainy season, when the waves thoroughly wash away the sand, from which a half-meter cliff forms at the border of the surf, but this is typical for many similar beaches in Thailand.

Waves are regular, but with a fair wind. The entrance to the sea is clean only in the center, without stones and corals, although in some places there are large boulders right in the middle of the beach. There are Bananas on the flanks, there are already deposits of stones under the water and you won't be able to walk along the bottom there.

The coast has perfectly preserved its jungle, so there is a little more than enough shade on the beach. Moreover, the entire shadow is not somewhere far away, but right next to the water, but only until lunchtime. West Bank, which means that in the afternoon here the sun is hot in the face and until sunset. Some time ago, there were sun loungers with umbrellas on Banana (in the photo I just caught this period).

But in the wake of new trends from the Phuket administration, which swept all the beaches of the island, sunbeds were removed from here. So all Banana Beach visitors bring bamboo rugs and inflatable mattresses with them.. 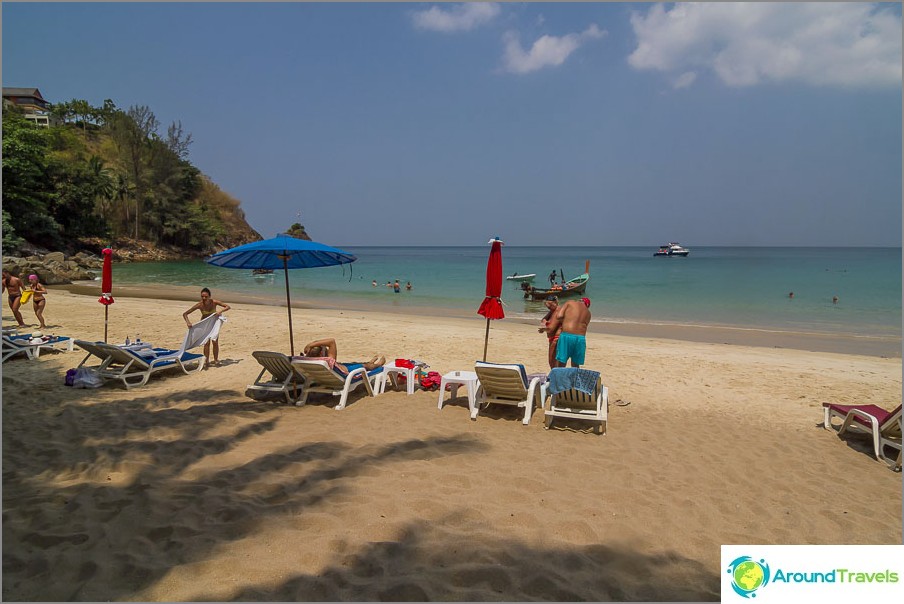 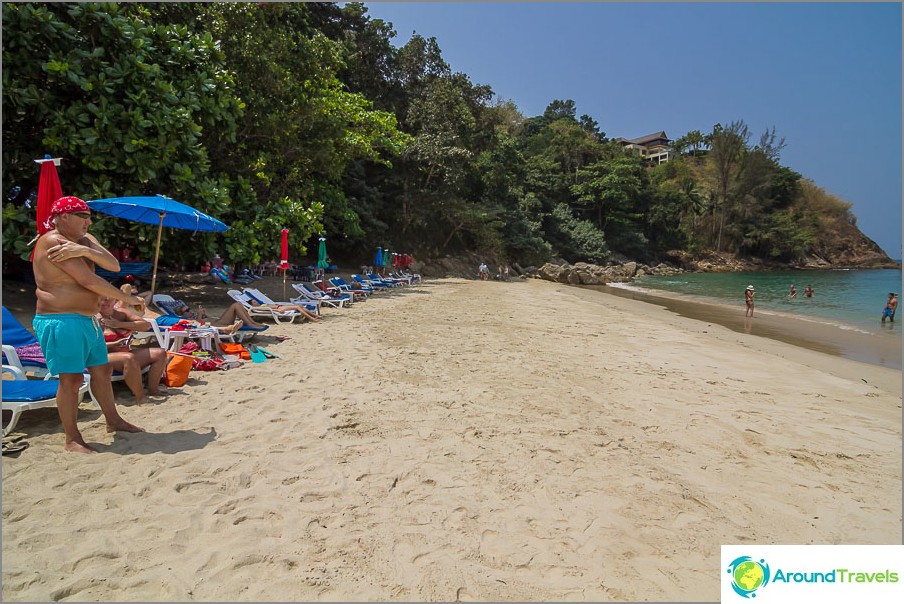 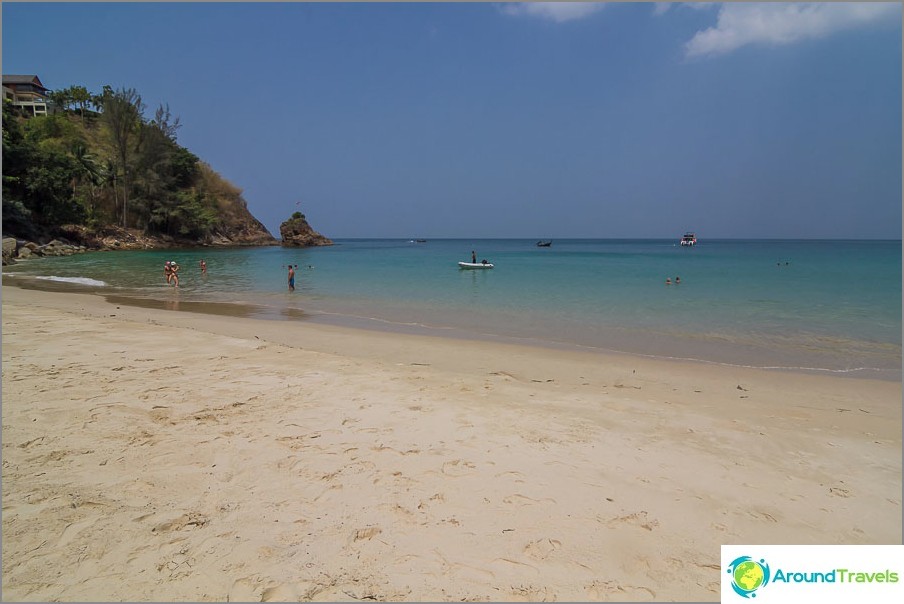 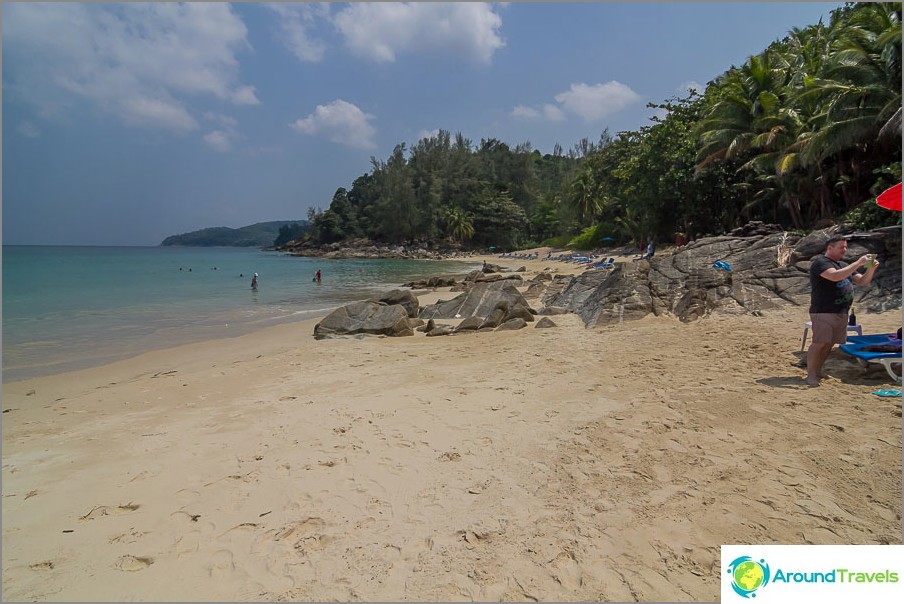 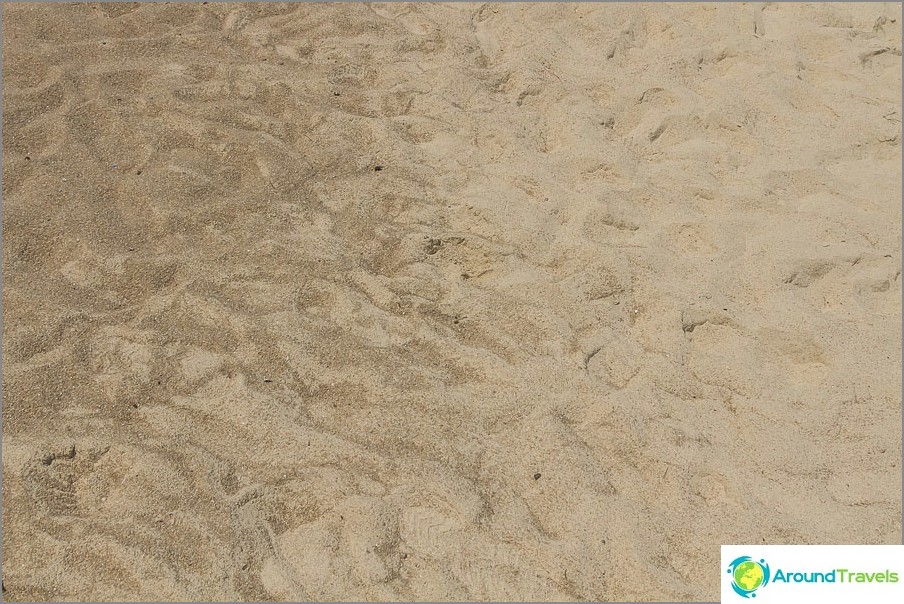 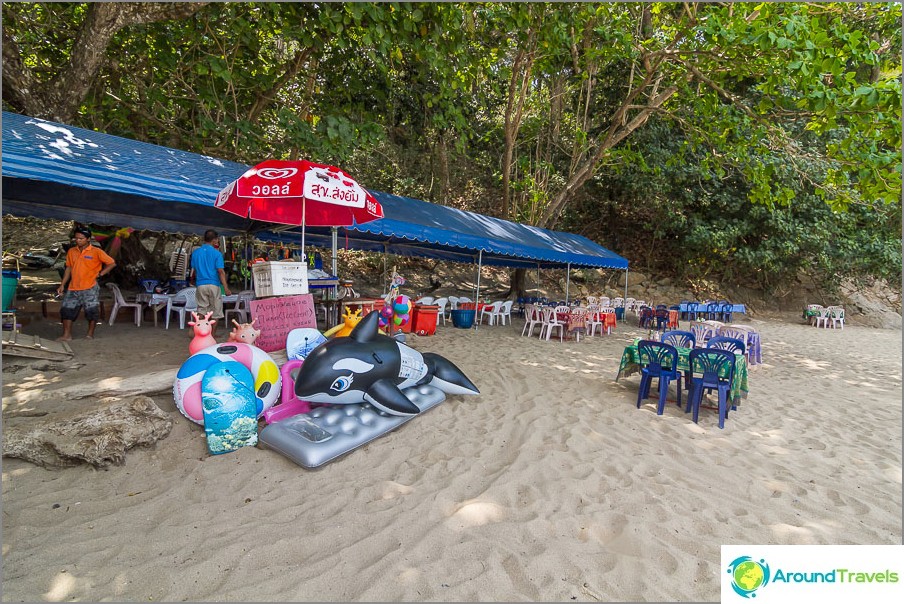 Banana Beach is located in one of the least developed areas of Phuket, so there are only mountains, jungle, one road and a couple of large hotels for one and a half kilometers around. On the beach itself, there is a small Thai cafe with a cosmic price tag, but they cook well and offer a fresh water shower, for which you can forgive them all the cheats..

There used to be a rental of beach equipment on the beach, but how things are now - you will have to find out the next time you visit. Here you can snork well if you have a mask and fins.

There are no buildings on Banana, except for a cafe, and the nearest villas and hotels are located at a decent distance from the entrance to the sea. The hotels closest to the beach are five-star and with great views Andaman White Beach Resort, which is located approximately halfway between Banana Beach and Naithon.

About the same distance from Banana Beach, but in the other direction, closer to Bangtao, is Anantara Layan Phuket Resort .

Save the point from the map below to your navigator and follow the directions. If you enter Banana from the north, from the beach Bang Tao or from the south Knighton, then after Andaman White Beach Resort there will be two serpentine turns, left and right.

After entering a flat road, look for parked cars or a self-made signpost to the beach (which sometimes falls off). If you pass to Anantara Layan Phuket Resort, then you have already passed Banana Beach. If necessary, transport can be parked right on the side of the road. 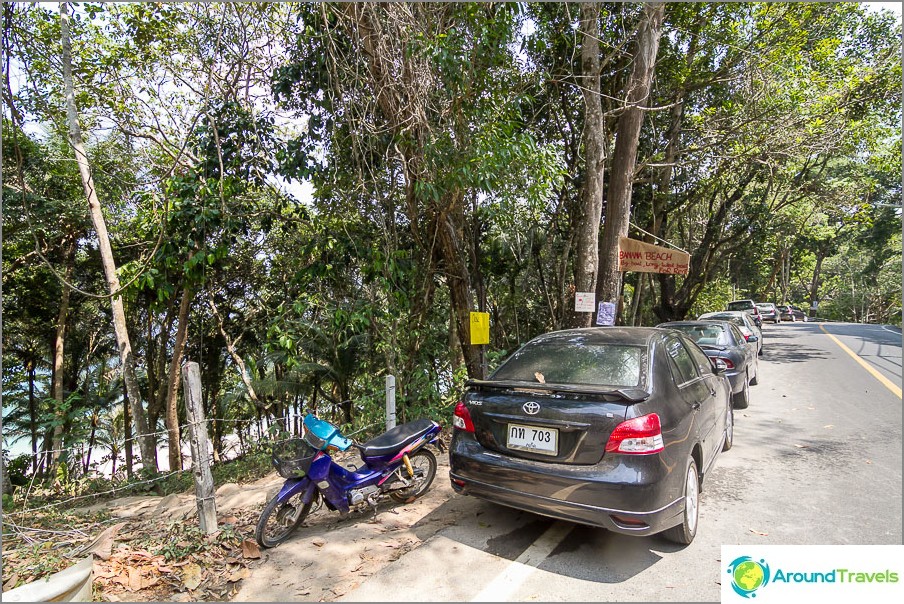 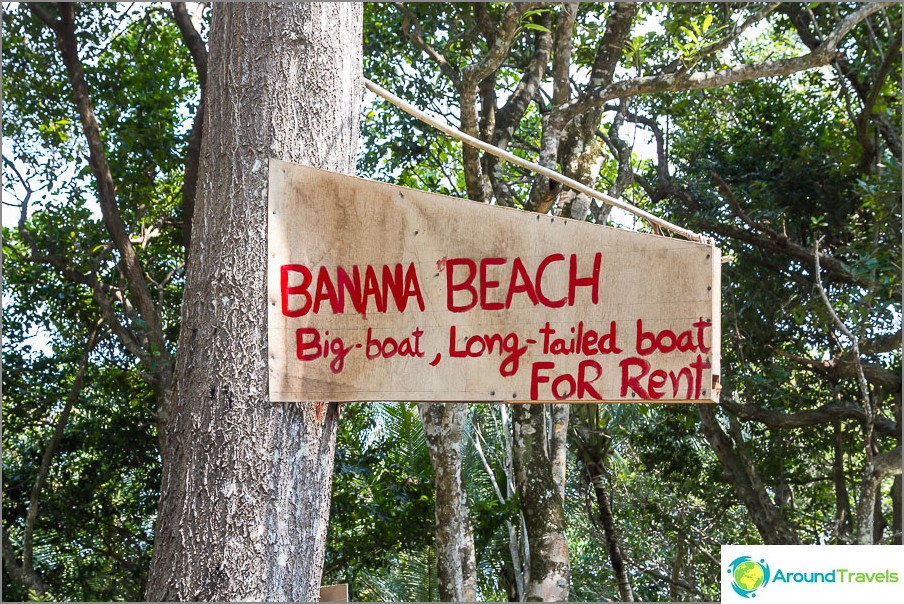 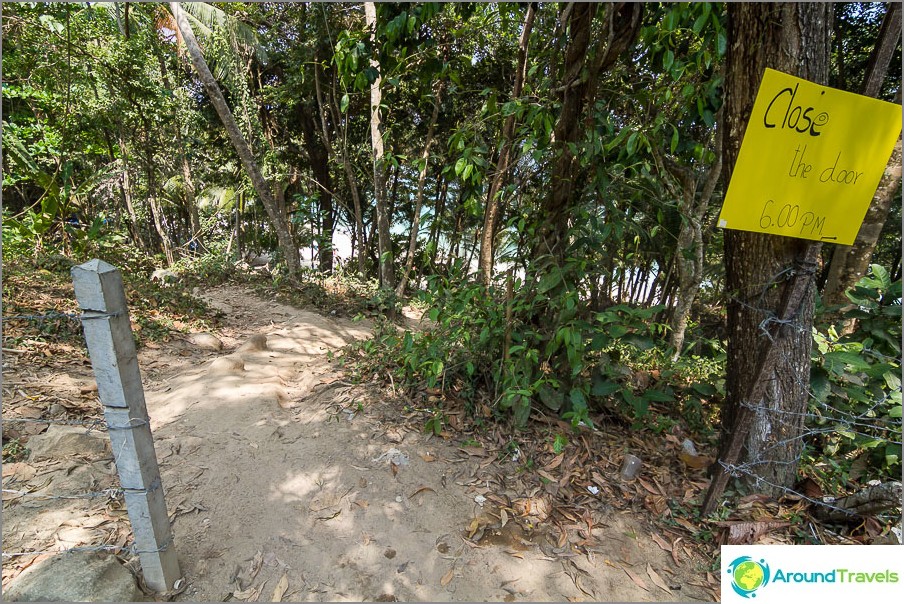 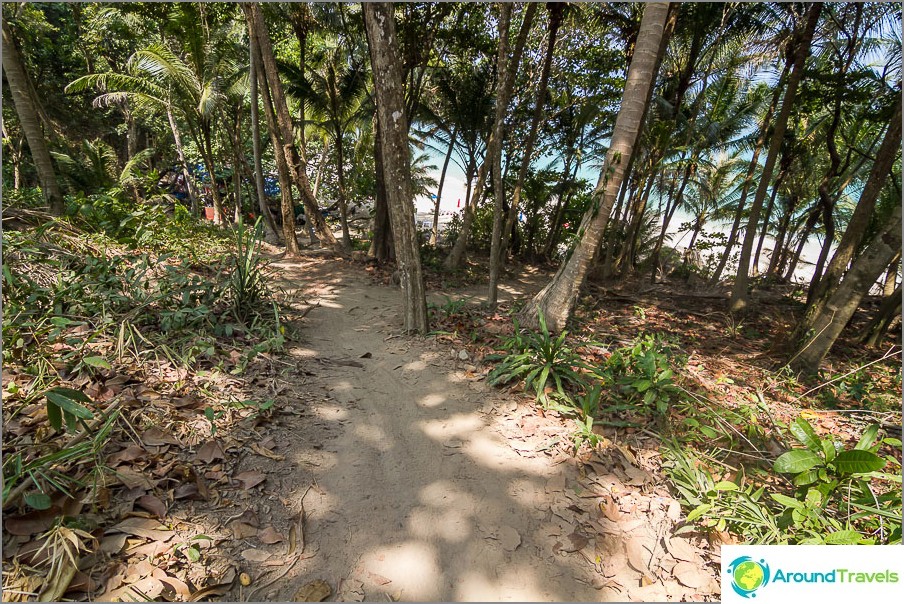 Pay attention also to my detailed overview of all the beaches of Phuket, this will help you decide on the choice of a beach for vacation or longstay.