Bangtao Beach is an arc of the beach with a length of about 7 kilometers, in the south it ends with a small promontory, where numerous windows and red roofs of villas can be seen on a hill of greenery. The opposite, that is, the northern, part of the beach is also closed by green hills, but already much less populated.

Almost along the entire length of the wide strip of the beach is framed by a casuarine grove. In general, the atmosphere of the beach is relaxed and peaceful. Quiet, not crowded, spacious. Compared to the neighboring Surin, south of the headland, Bangtao looks rustic and melancholic.

Description of the beach

Near the cape in the south, fishing boats are usually anchored in the sea, and stones begin under the very hill. The water near the boat stop is not very clean. There are days before the start of the season, when very small, match-head jellyfish appear in the water. They burn, but not much. It looks like a slight tingling sensation.

The sand on the beach is rather light, yellowish gray. The bottom is a little muddy, so the water is cloudy, although it is clear by itself.

Out of season, that is, in summer, it is quite garbage, since no one cleans up, there are practically no people and the view of the beach is a little deserted. No sun loungers, no scooter rentals, no beach cafes. From about April, a wave and bad weather comes, a fearful package tourist leaves and the beach plunges into its garbage melancholy, driving fragments of door frames and smaller garbage along the waves.

Tourists and infrastructure in the form of sun loungers under umbrellas, beach vendors, small cafes and shops, appear only towards the end of autumn. The sea becomes quiet and gentle.

In the mornings, in general, there is complete calm and grace. Closer to the New Year, the beach blooms, playing with all the colors of shops with children's toys and colorful T-shirts. Serving food, pouring drinks - life is in full swing. Garbage in the water sometimes comes across, but in the season it is more the exception than the rule..

It is crowded on the beach near the places of accumulation of hotels adjacent to the coast. Highest density near Bangtao Beach Resort and Bliss Beach Club with plunge pool, cozy sofas, green lawn and horse food and drink prices.

If you move away from the hotels along the beach, then in the season you can easily find absolutely deserted places. True, there will be no infrastructure either. Only casuarines and sand.

Entry into the water is quite smooth, it becomes deep in 10 meters. The bottom is quite even and without stones, it is, in principle, convenient for children here. At low tide you can run on shallow water.

The ebb and flow schedule is quite complicated here. Towards the end of the season, in March-April, there are strong ebb tides in the evenings. But this does not happen every day. During the strongest low tide, about 50 meters, you have to walk somewhere knee-deep in water, while there is still a wave, the sea is restless and often windy.

Before the season, in August-September, low tides happen in the morning, but in this case the sea is usually calm. In summer, out of season, it happens that the sea, on the contrary, rises so that only a thin edge remains from the beach, which is quite wide on other days. Out of season, about all summer, swimming here is generally quite difficult - a strong and large wave, unexpected garbage floats in the water.

One June we saw a part of a boat being carried back and forth along the waves near the shore. Surfers love waves!

Near the beach club Bliss Beach Club - slender rows of sun loungers under umbrellas. There are four rows during the season. At the closest to the sea, they sometimes ask for 150 baht for a sunbed. The rest - 100 baht.

It often happens that the same people collect payment for sun loungers and sell drinks and simple food from small stalls or in small beach cafes, with certain communication skills, you can triple your sun lounger for free by buying a drink from them.

Casuarin trees grow almost along the entire beach, and palm trees can be found in places where large hotels adjoin the beach. The beach is located so that the sun rises just because of the strip of tall trees growing along the beach. Some tourists at this time are just jogging along the dense sand along the coastline..

Fortunately, this happens almost at sunset, when the sun is no longer hot. And then one of the most beautiful natural phenomena happens - sunset, one of the advantages of Bang Tao beach. 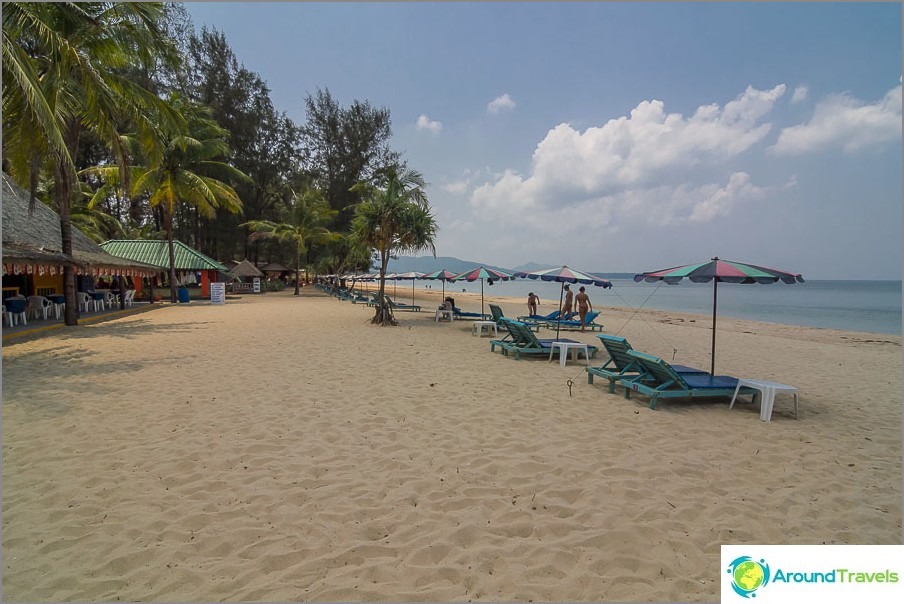 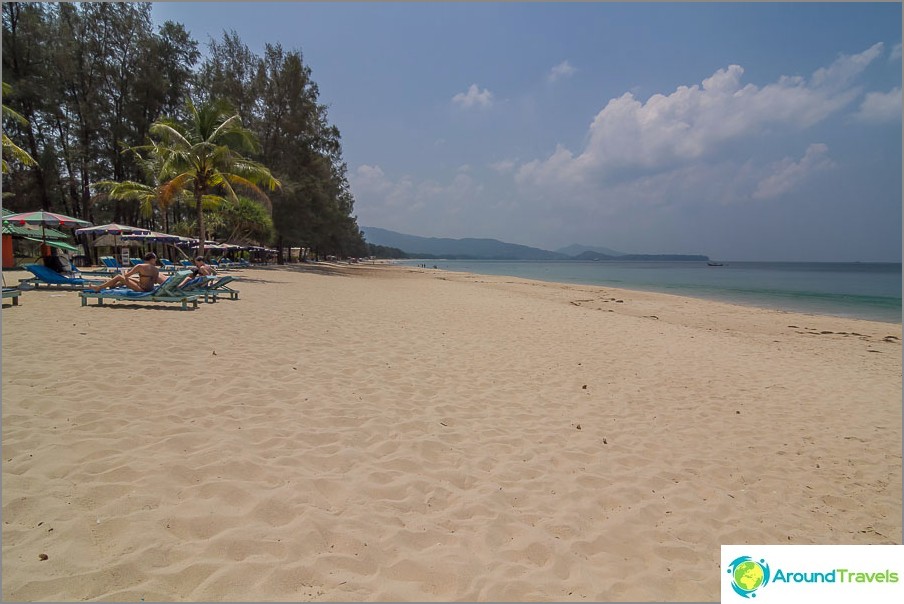 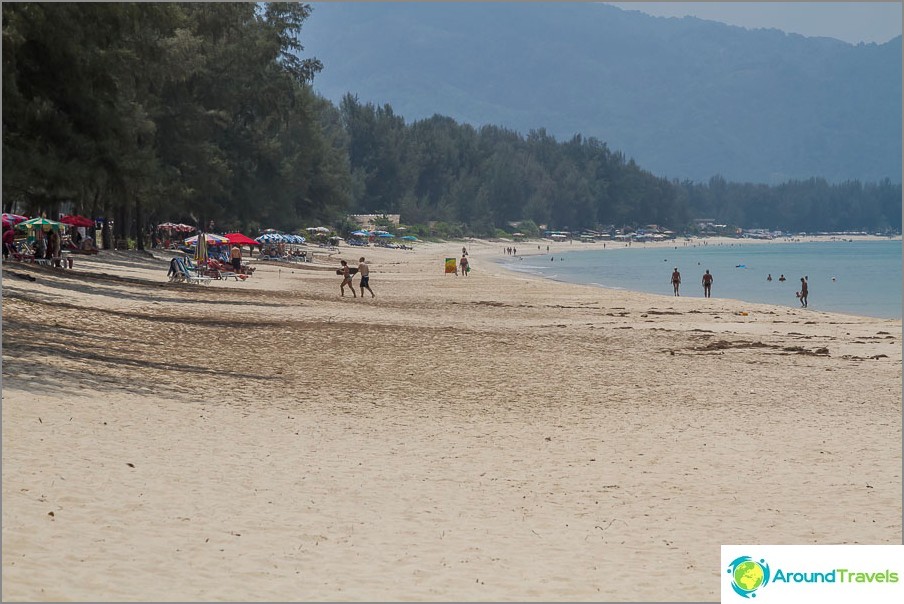 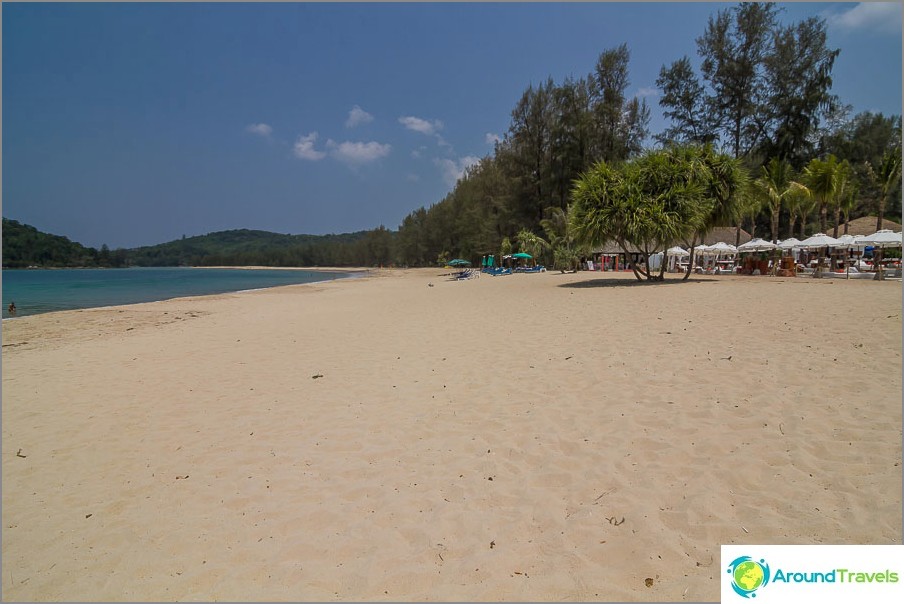 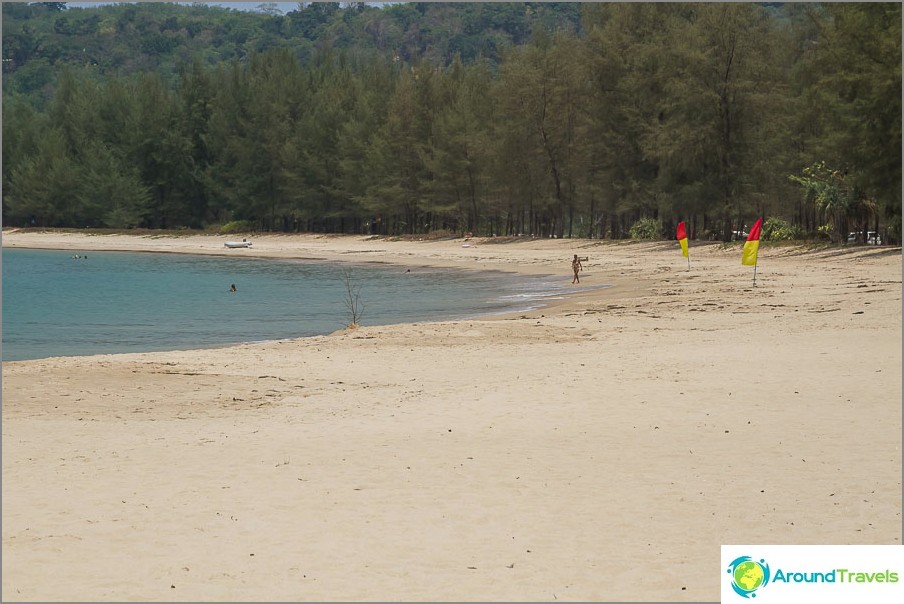 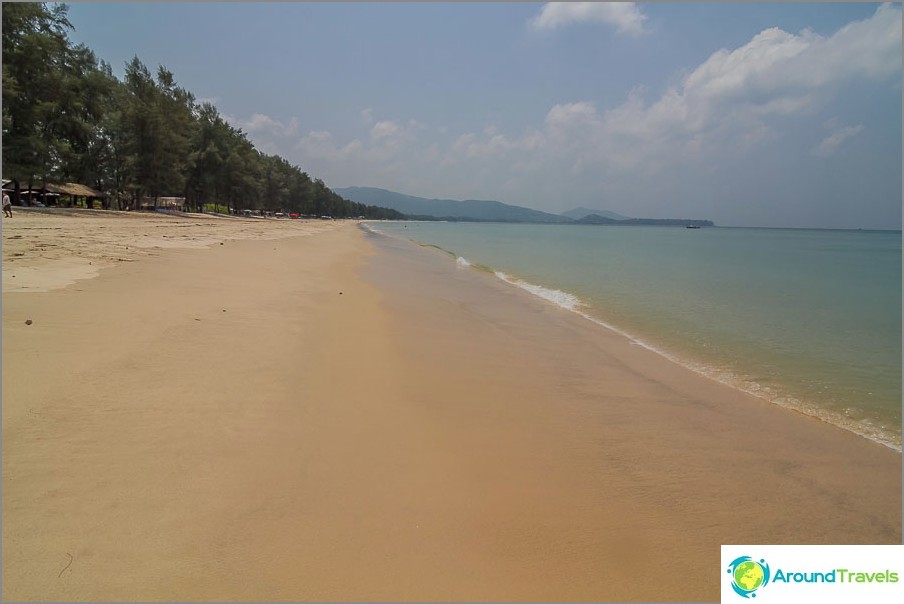 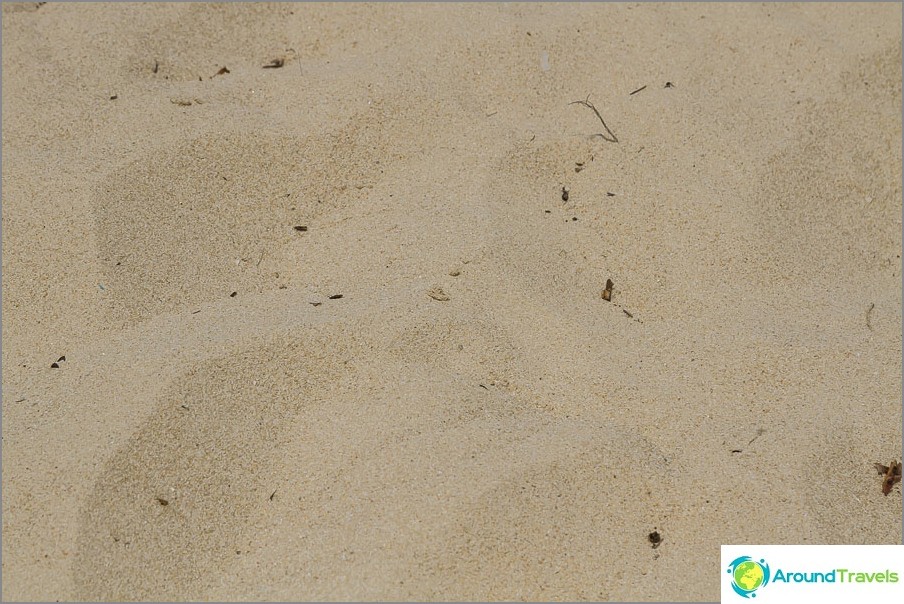 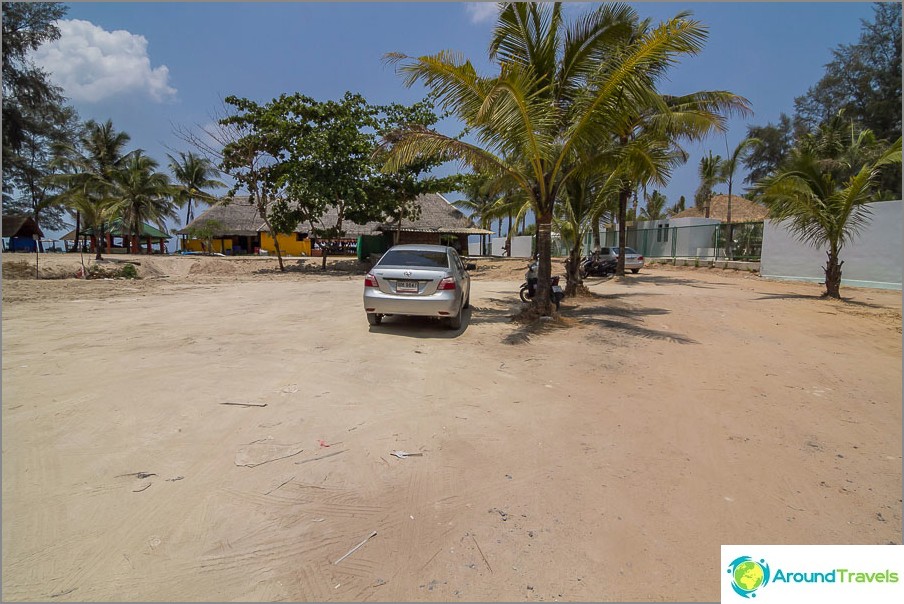 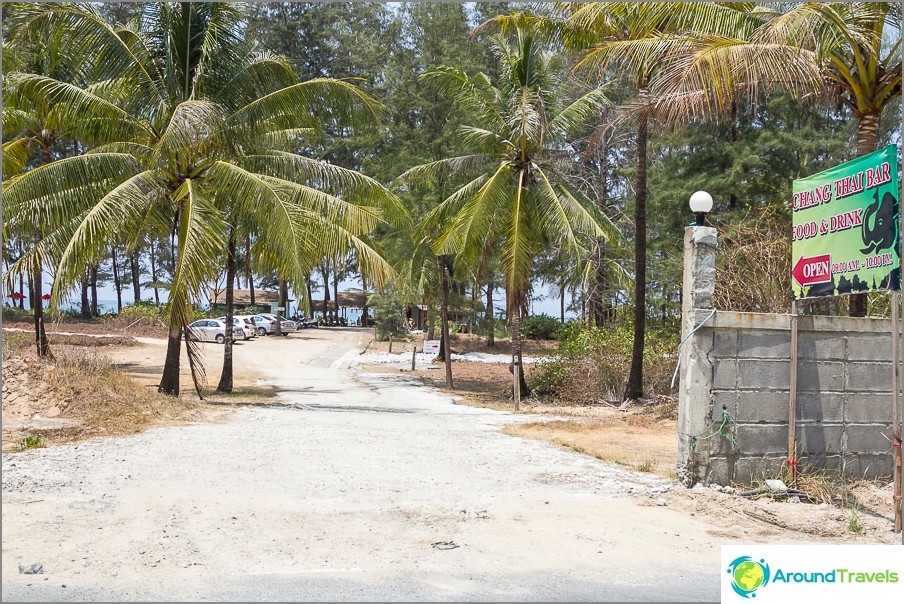 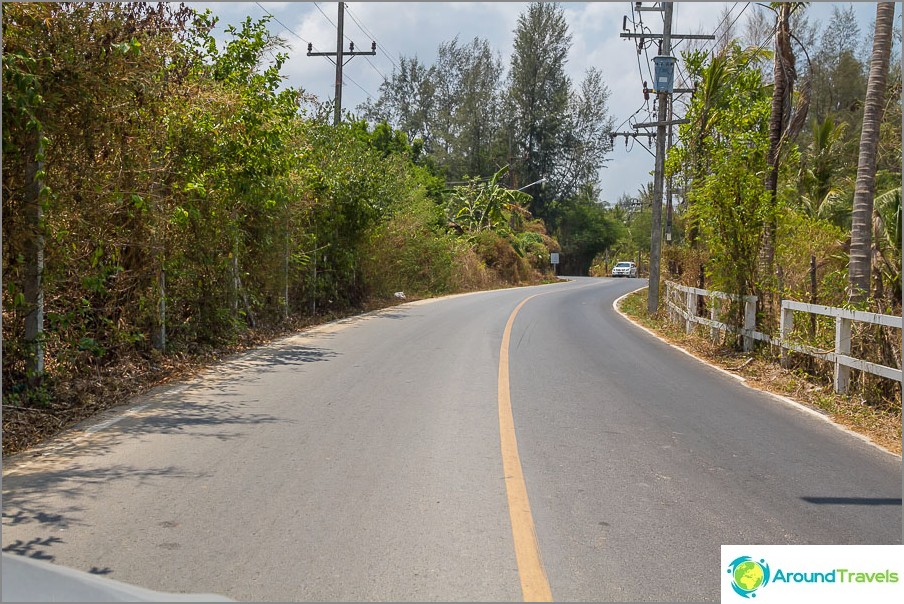 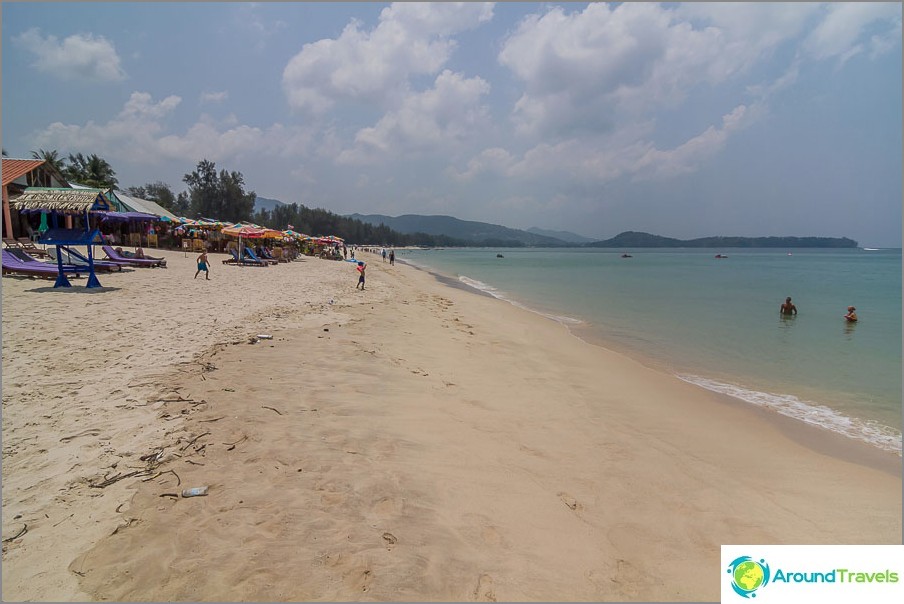 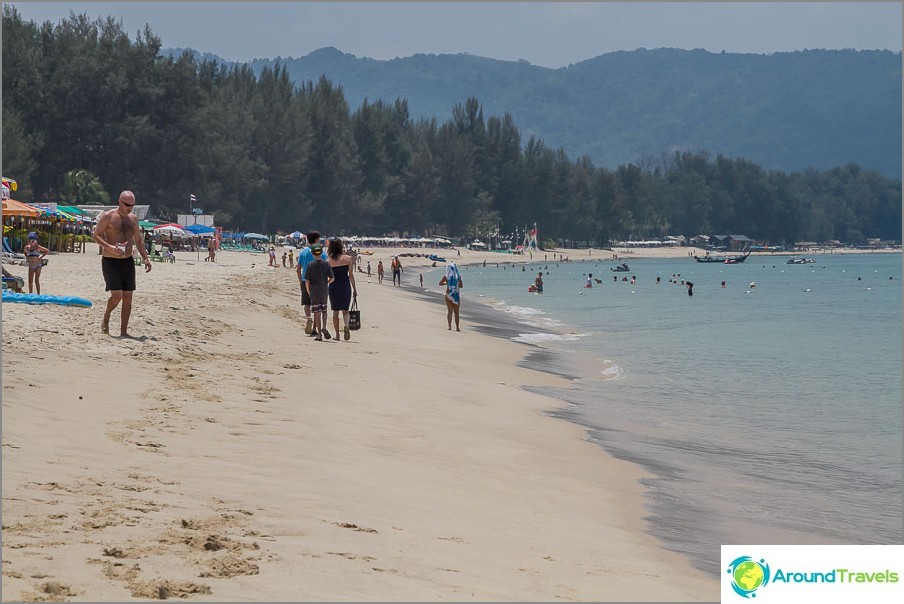 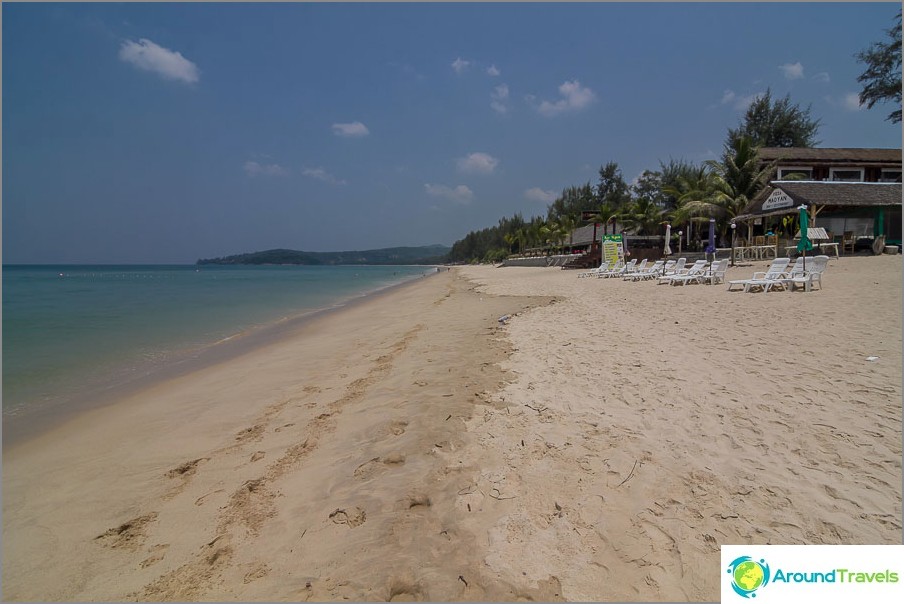 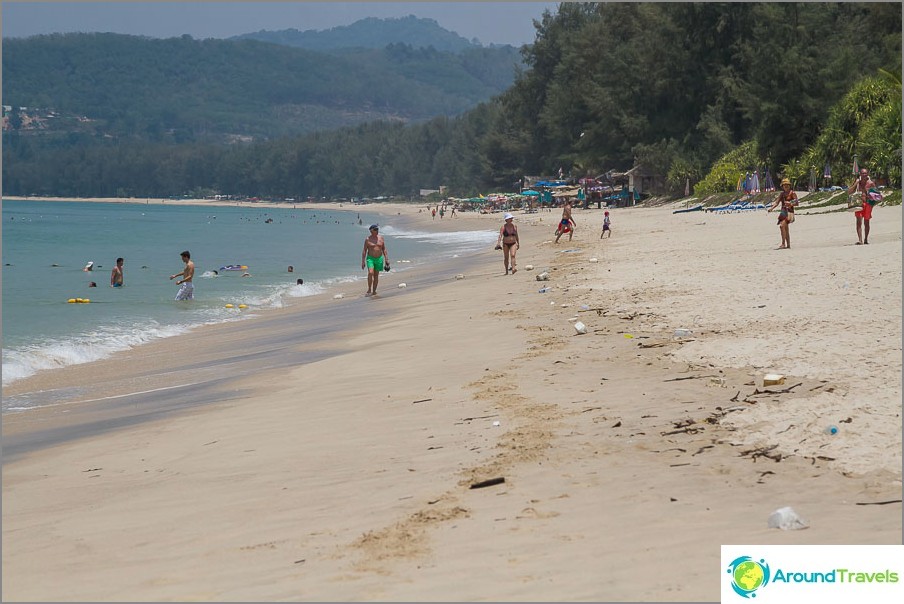 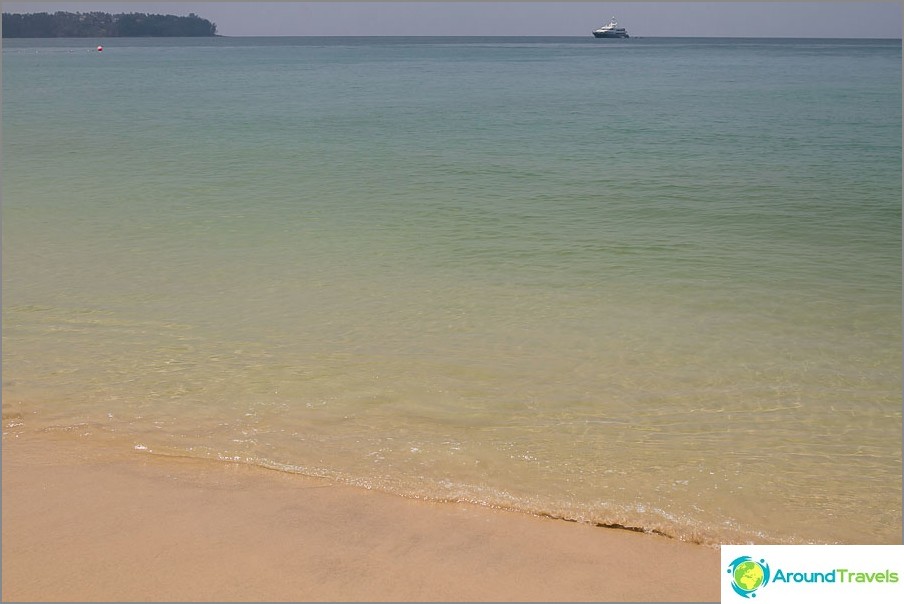 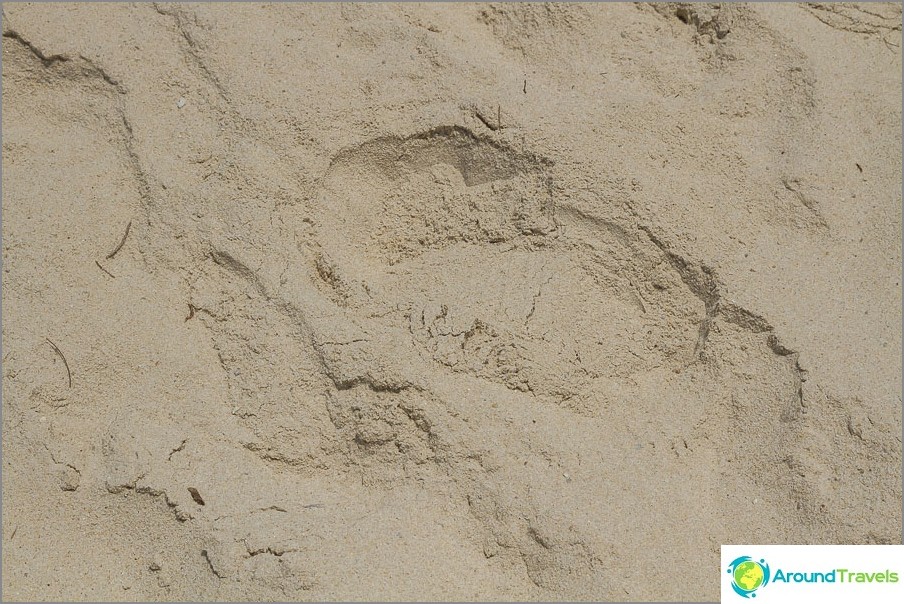 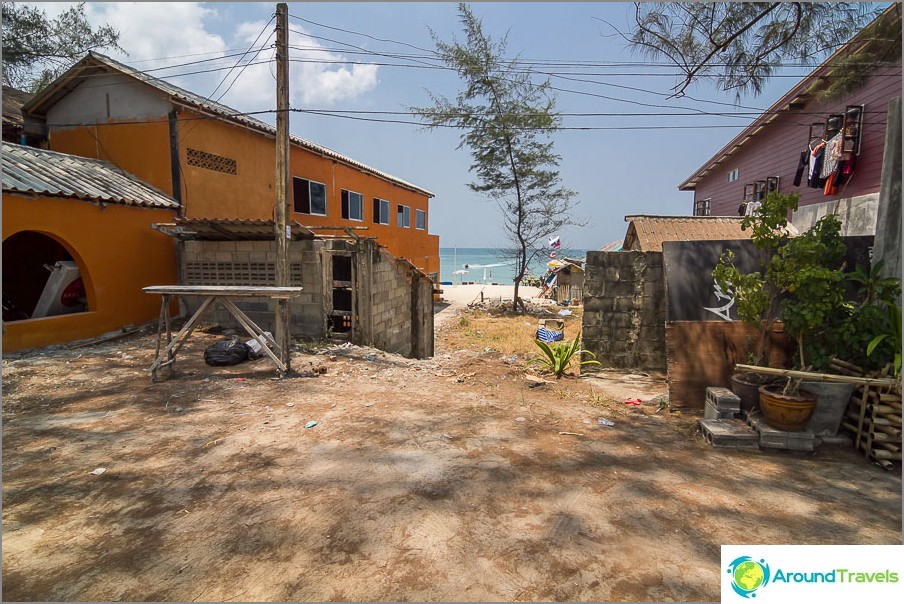 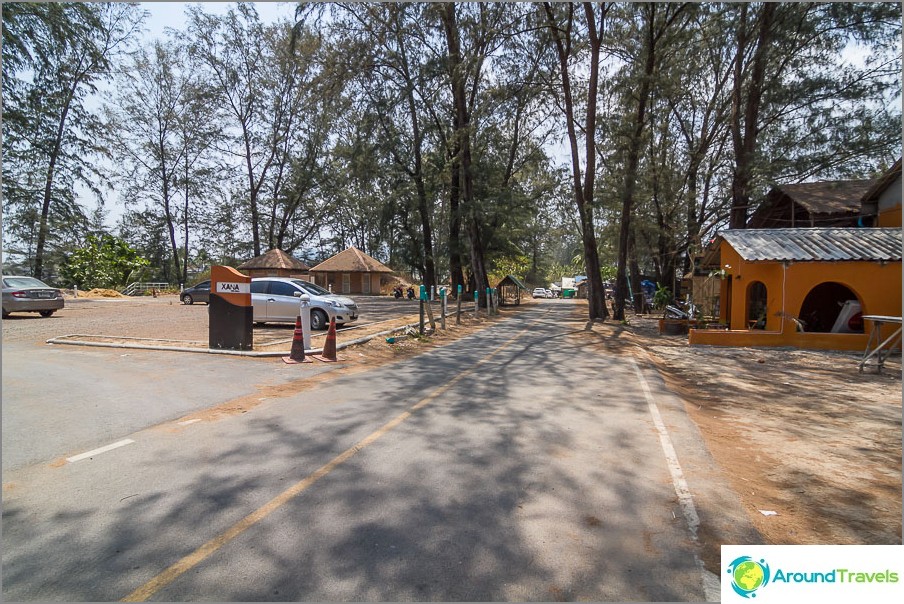 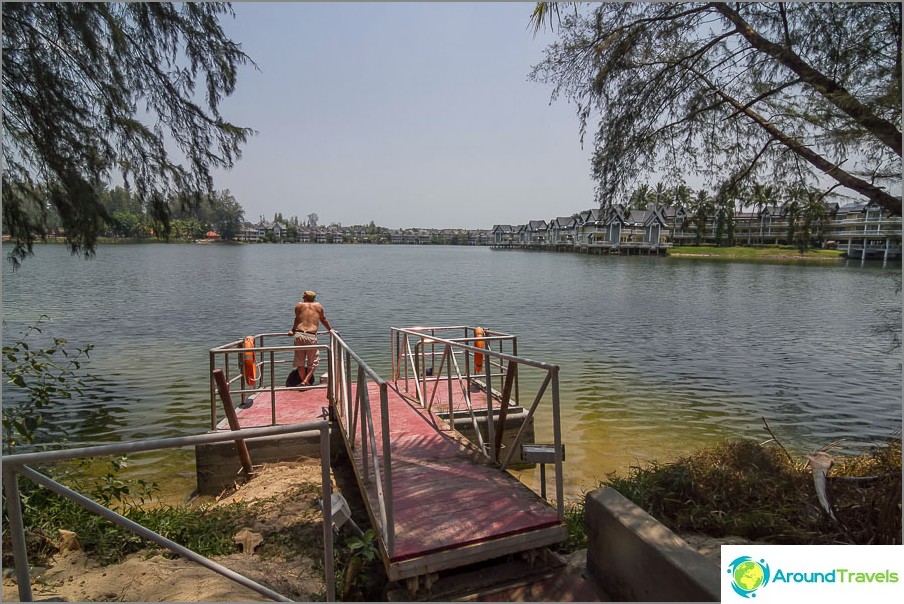 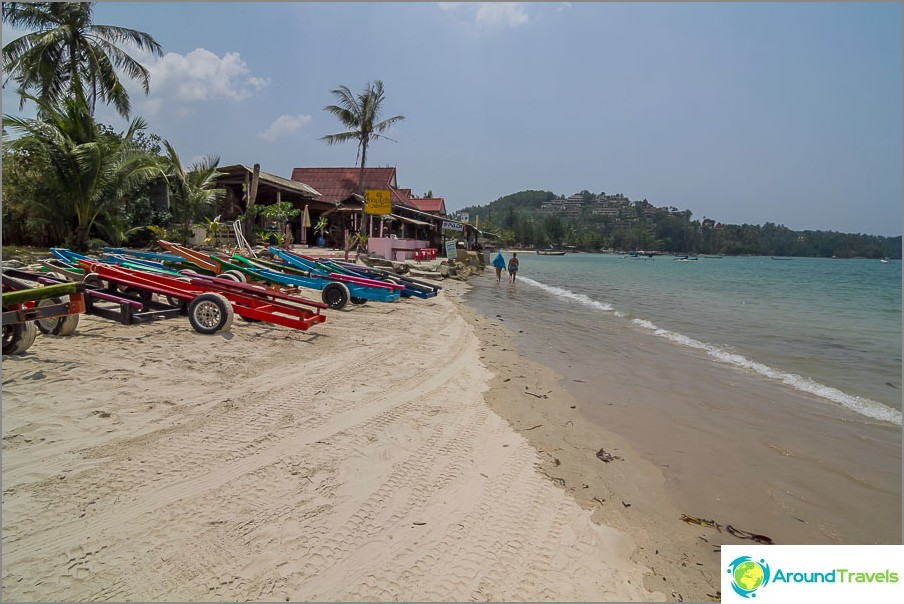 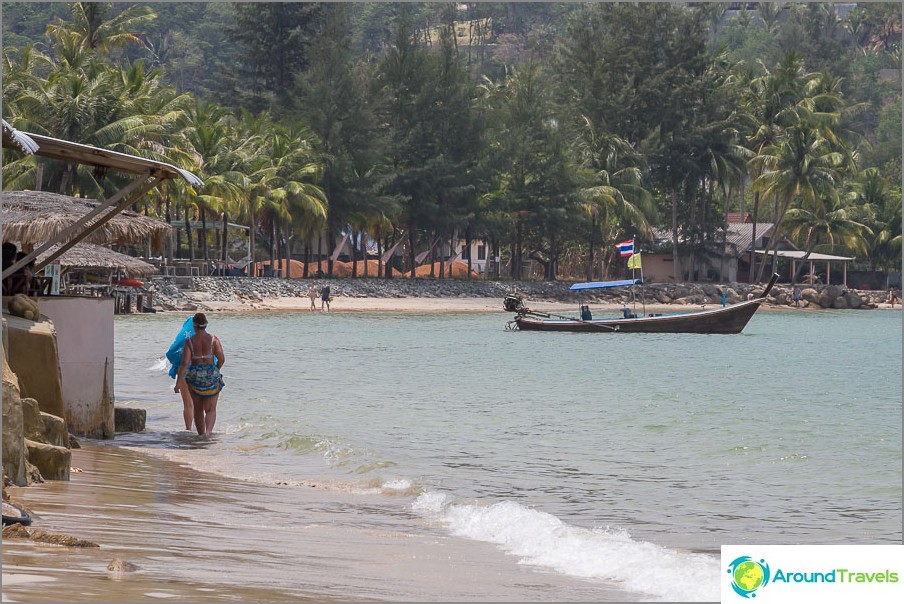 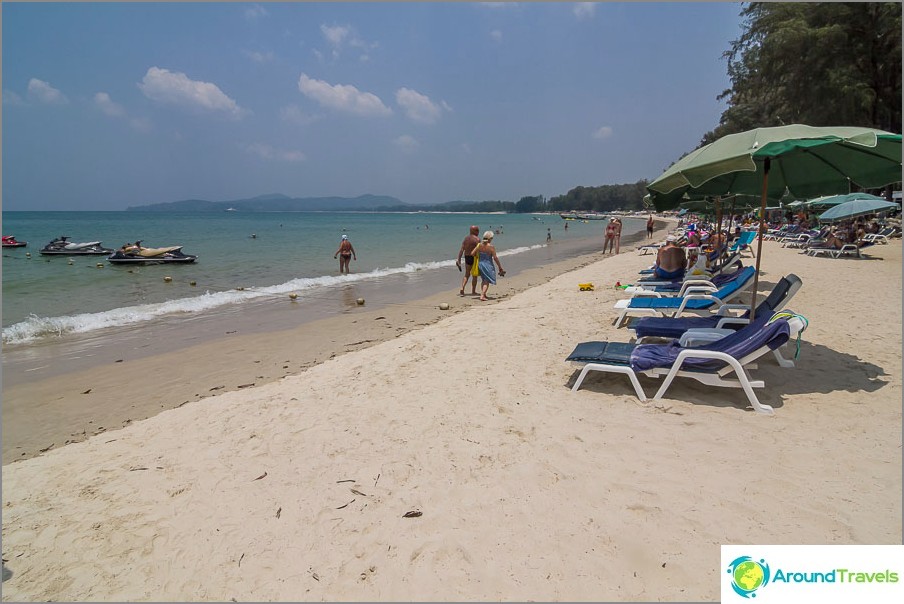 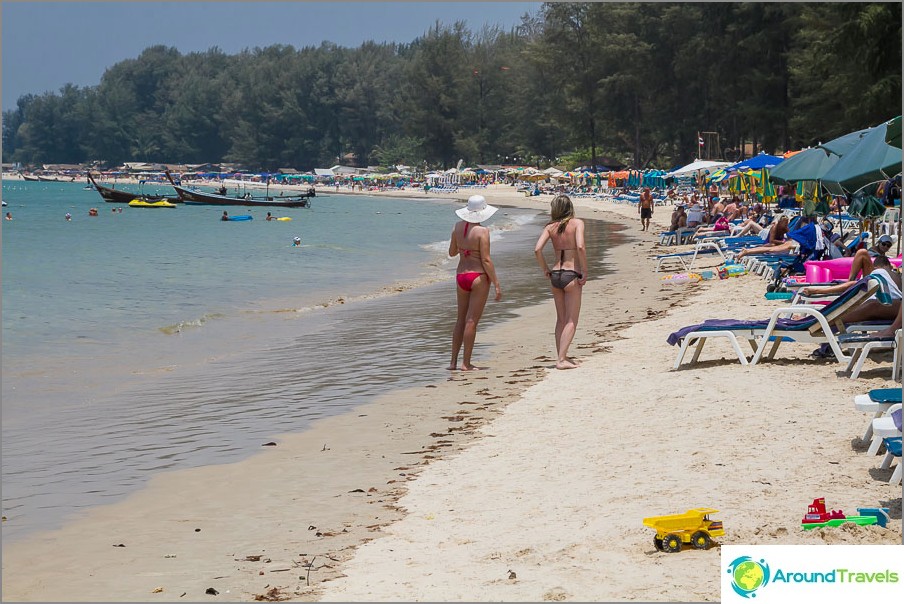 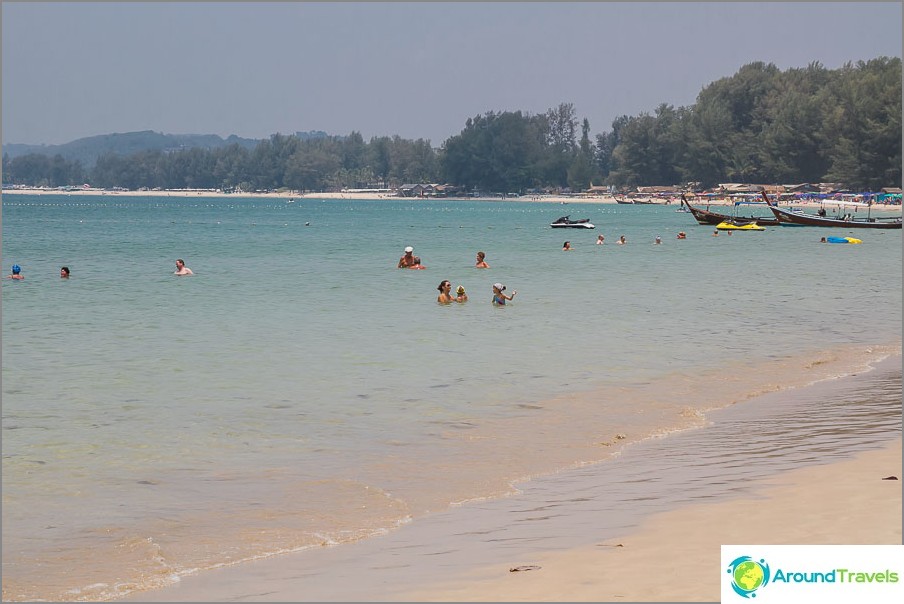 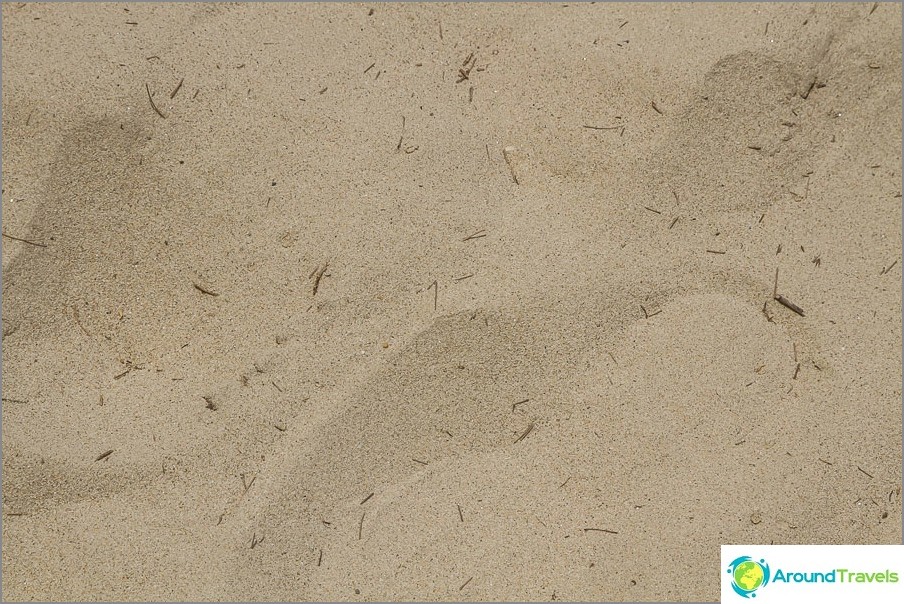 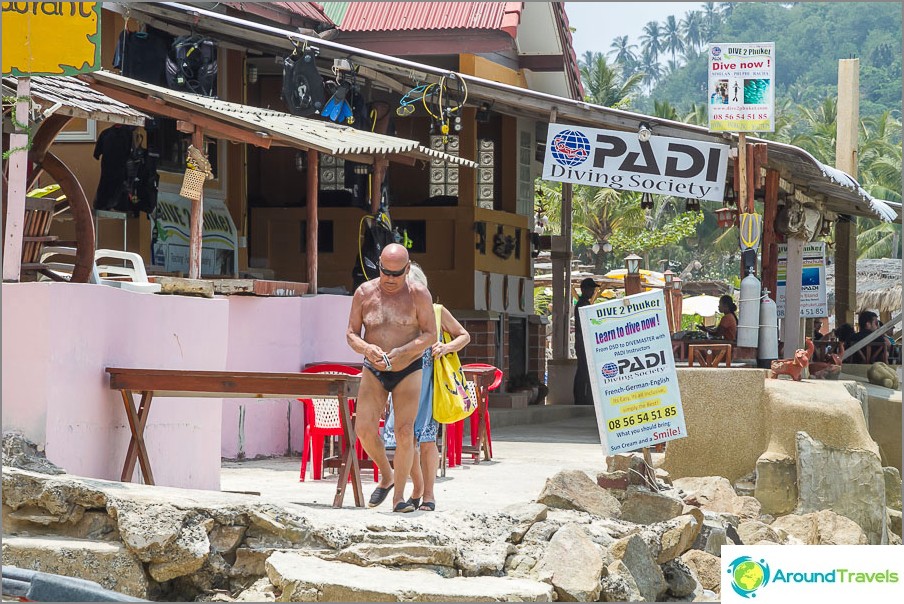 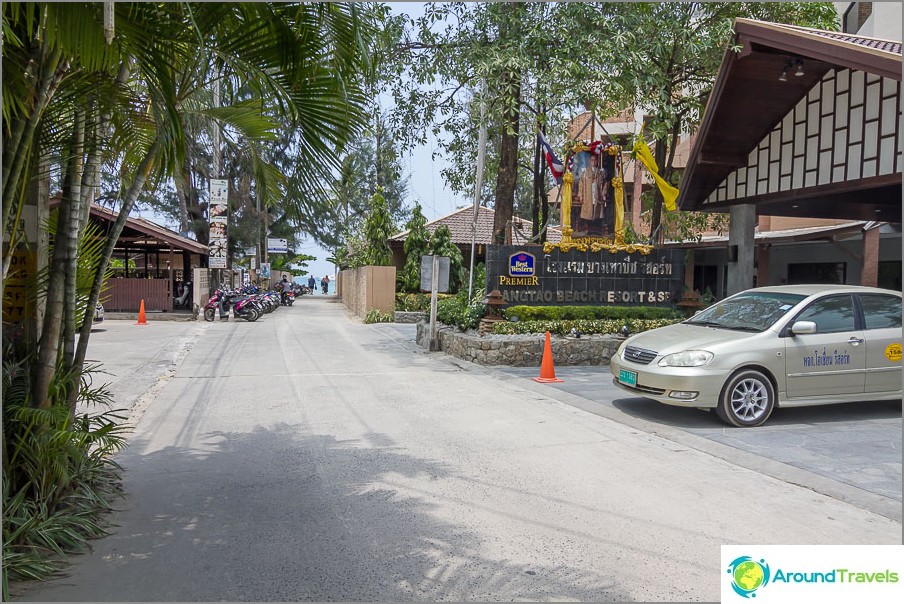 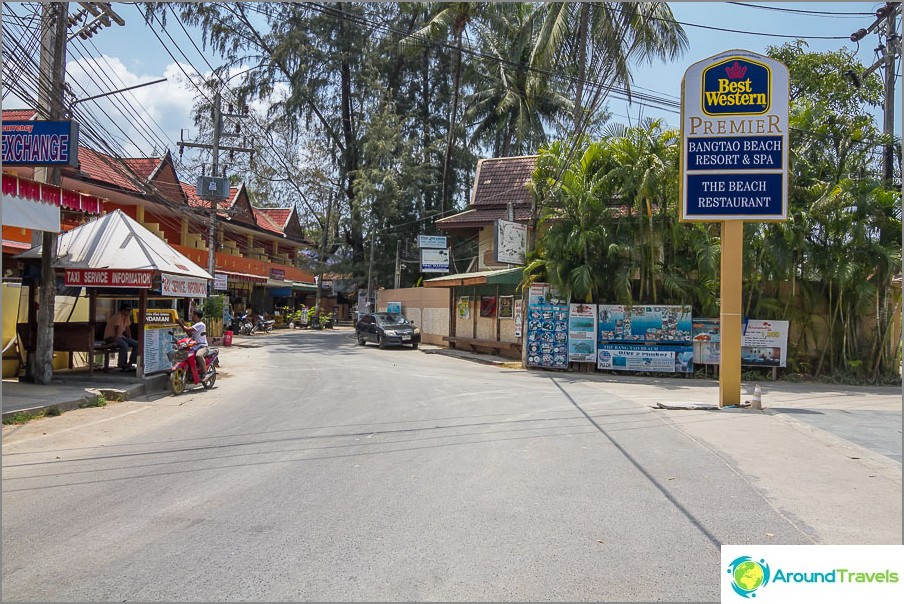 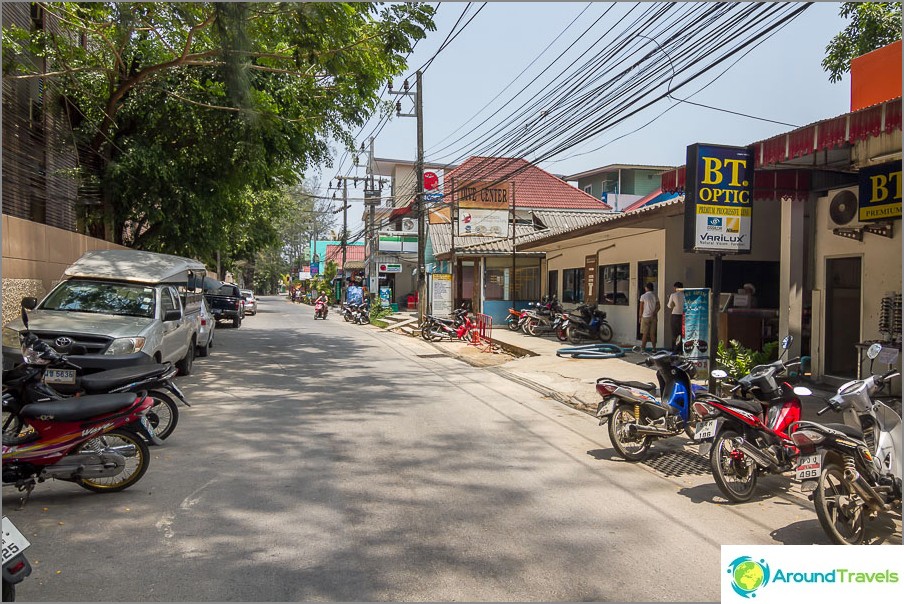 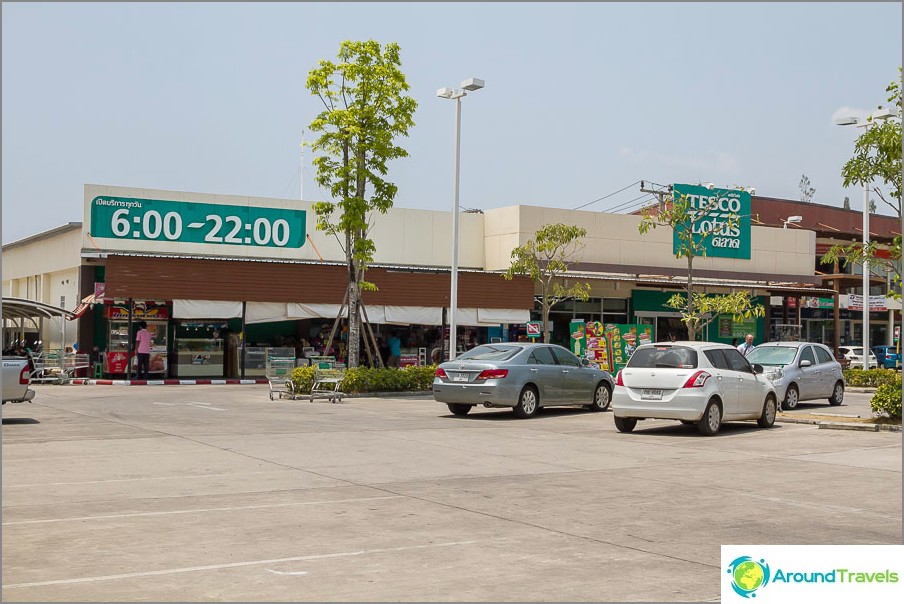 The most infrastructurally developed is the southern part of the beach. Behind the resorts there is a street with cafes and shops, there are also parking lots of taxi drivers who, for 100-200 baht, take them to Tesco and McDonald's supermarket, which are located on a busy road about one and a half kilometers from the coast..

Between this road and the beach is a Muslim village with shouts of muezzins and chickens, interspersed with expensive villas and small hotels. The village and rental houses continue along the road. Also the main road has a pair of 711, Superchip and market.

Rows of shops and local cafes stretch along the flesh to Surin. There are two markets. One opposite the Superchip, about a kilometer from McDonald's. Another evening, just behind Tesco towards the beach. Work twice a week each.

Massage on Bang Tao beach for 200-250 baht. There is longtail ride, scooter riding, dive center. In the evenings, they take an elephant along the beach.

Right on the beach, there are either big expensive hotels or villas for 200 thousand per month. There are practically no ordinary houses for rent right next to the water along the entire length. This is due to the 2004 tsunami, which washed away all small infrastructure.

Behind the casuarine grove near the beach, there is a quiet and narrow road, behind which there are often fields with cows and wastelands with bushes. Even further - villas and houses of local residents (mostly Muslim Thais).

The main building is in the southern part. The new hotel Amin Resort is five minutes from the beach, there are cafes, a taxi rank and shops nearby. Ibid, the above-mentioned Bangtao Beach Resort .

There are several condo hotels with rooms for 1000-1500 per night, not on the beach itself, from 200 to 500 m from it. Between the beach and the main road in a Muslim village, there are many rental houses or rooms in two-storey houses. Behind the road, you can also rent a house, it will be cheaper, but it’s too far to walk to the sea. On average, about 10-15 thousand per month at a distance of 1-2 km from the beach. Room from 7-9 thousand.

Approximately in the middle of the beach arc is the lagoon, along which there are the houses of the hotel of the same name - Laguna Beach Resort Hotel and Moevenpick Resort Bangtao Beach Phuket. A very large hotel complex with its own infrastructure and ponds, next to the Laguna Phuket golf club. There is almost no housing in the northern part, and in general it is quite deserted.

From the airport by taxi to the beach can be reached in 20-30 minutes and 600-1200 baht. From Phuket Town in about the same time. From other beaches longer, from 40 minutes. Because you have to go not along the coast, but through the same Phuket Town. Taxi from Phuket Town 500-600 baht. You can take a motorcycle taxi, it's cheaper.

By public transport, songteo, with Surin and Kamala you can get there for 40 baht, from the rest of the beaches - with a transfer in Phuket Town, from Phuket Town for 80 baht. If you go to songteo, you have to get off at McDonald's.

There is also Tesco, next to him is a tuk-tuk parking lot (a motorcycle with a cart) on which you can get to the beach in five minutes and 100 baht. Off-season, you can negotiate for 50 baht, and in season may ask for 150. By taxi - 200 baht. Walking distance from the songthaew road walk about 20 minutes.

You can park your car near the beach by driving up to the Bliss Beach Club or on the beach street behind the Best Western Premier Bangtao Beach Resort & Spa. You can stick a bike almost anywhere.