Home › New articles › How to get from / to Sochi airport (Adler) - bus, taxi, Swallow

How to get from / to Sochi airport (Adler) - bus, taxi, Swallow

Even people who have visited Sochi once or twice do not immediately develop the correct understanding that Sochi airport and Adler airport are the same thing. The airport is international, but at the same time some kind of small and small-town, especially in the arrivals area. With its own railway line, along which you can get to any settlement in the direction of Sochi or Rosa Khutor. Airplanes from Moscow, as a rule, are driven directly to the airport building and people are dropped off through the so-called «sleeve» - a handy bonus. In general, everything is clear here, the traffic pattern is not confused and all directions are well read by signs.

Adler is perceived as a separate, independent city, due to the elongation of Sochi along the coast and the concentration of its infrastructure around the former villages and villages, now - microdistricts. Adler is the largest of them. It is located on a plain, so they managed to push a lot of useful things into its infrastructure: an airport, a large railway station, an old city, a new city, Olympic facilities of the maritime cluster, the border with Abkhazia and a bunch of highways, where even experienced fighters of the Moscow Ring Road can get lost. and ring road.

All tourists arriving in Sochi for the first time are surprised that it is still necessary to get from Sochi airport to Sochi itself, and never once for five minutes. In principle, this is not a new phenomenon, but it turns out that you need to drive not through the wastelands of the suburbs, but through the dense infrastructure of a large city.

The airport operates around the clock, accepts almost all types of aircraft, has several types of parking: free, hourly (100 rubles per hour) and daily (350-500 rubles per day).

On the second floor, in the sectors «IN» airport you will find free «mother and child room», to be more precise - an apartment that includes a reception room, bedroom, bathroom and kitchen.

In the sector «WITH» there is a luggage room, where for 300 rubles per day (and plus 100 for each next one) you can drop your luggage. Well, and standard for all airports, free Wi-Fi with quite stable quality and connection speed. 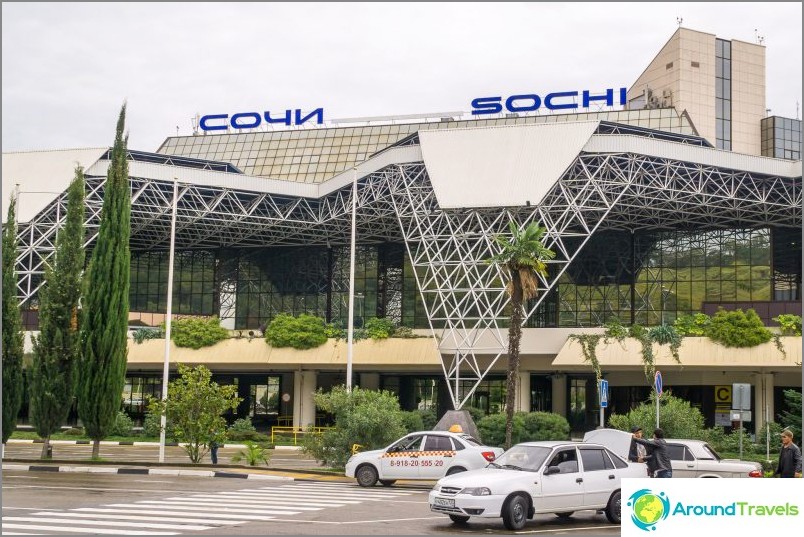 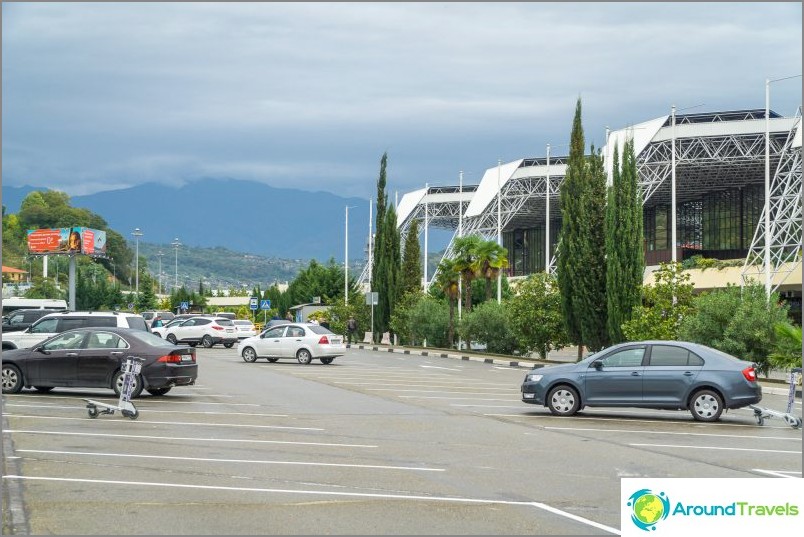 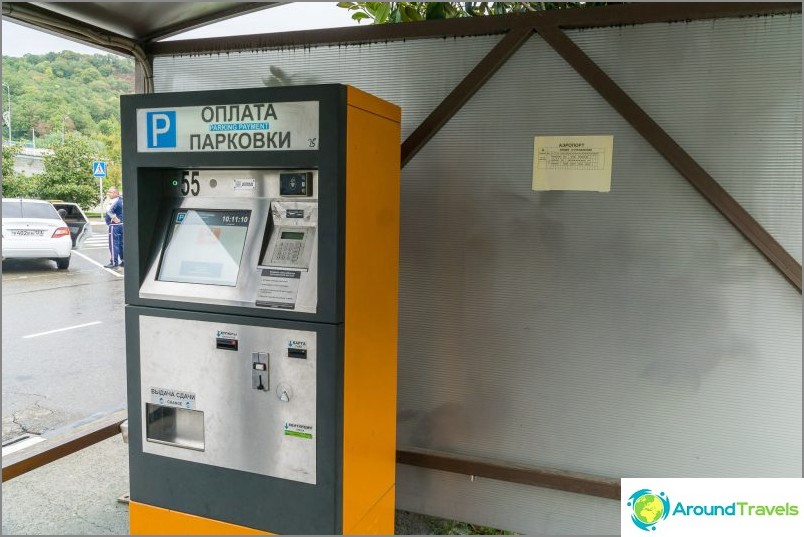 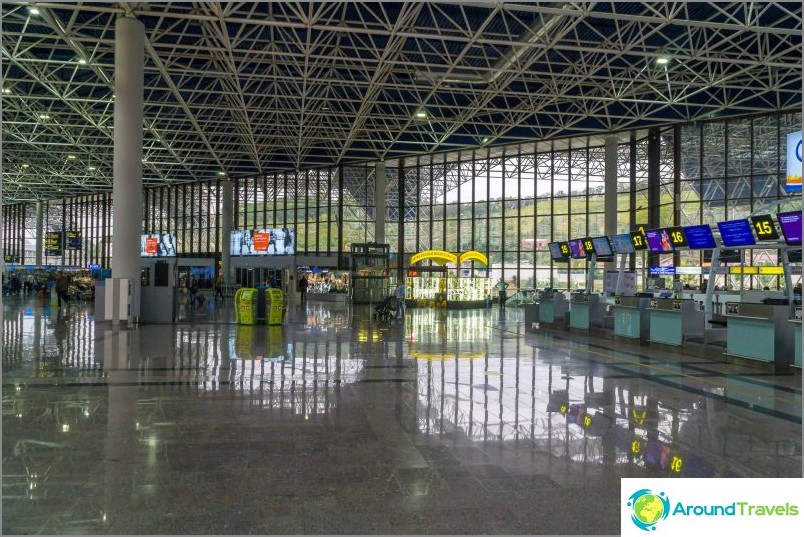 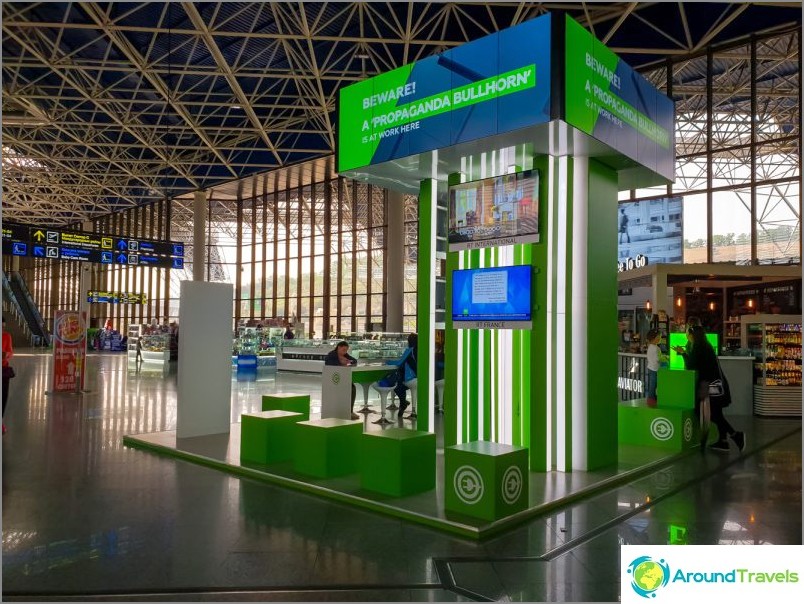 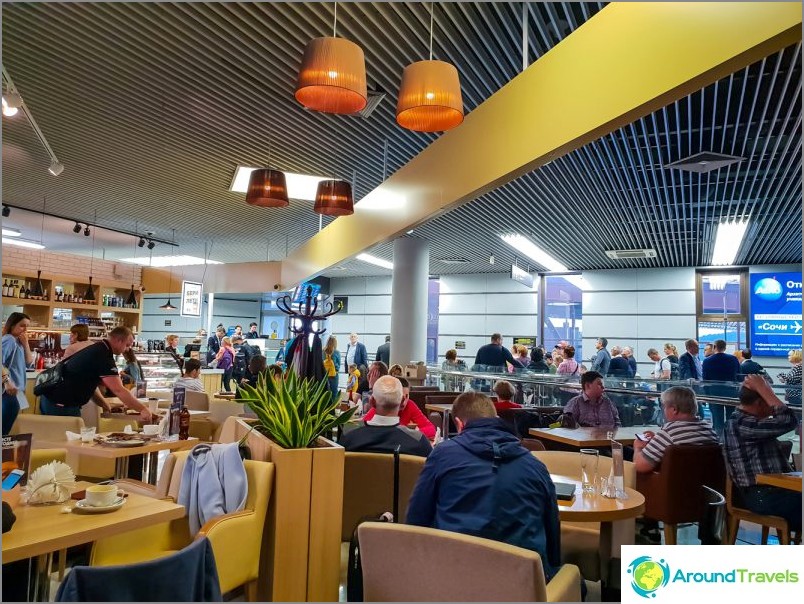 Chocolate girl near the gate 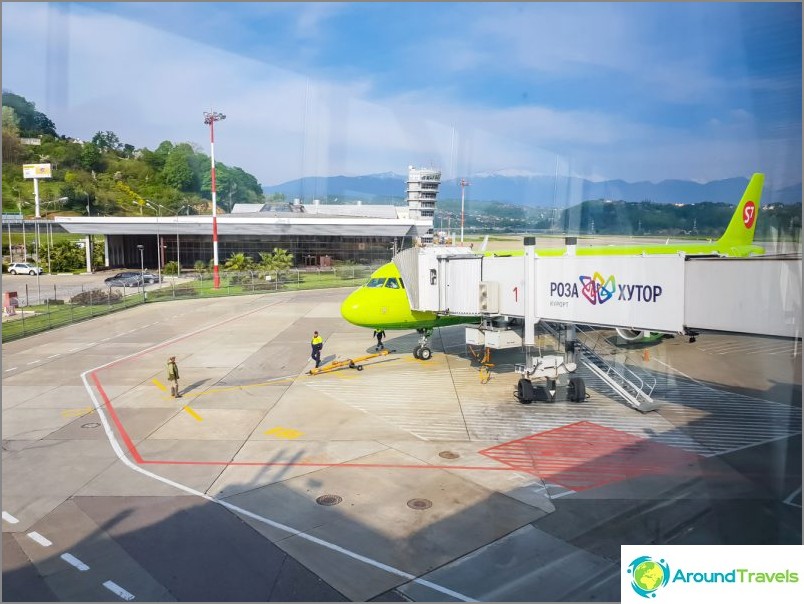 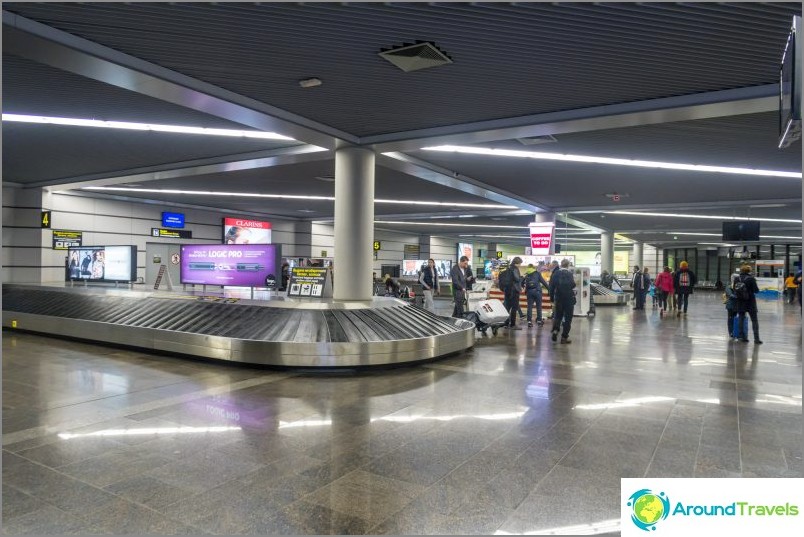 The baggage claim area is quite small 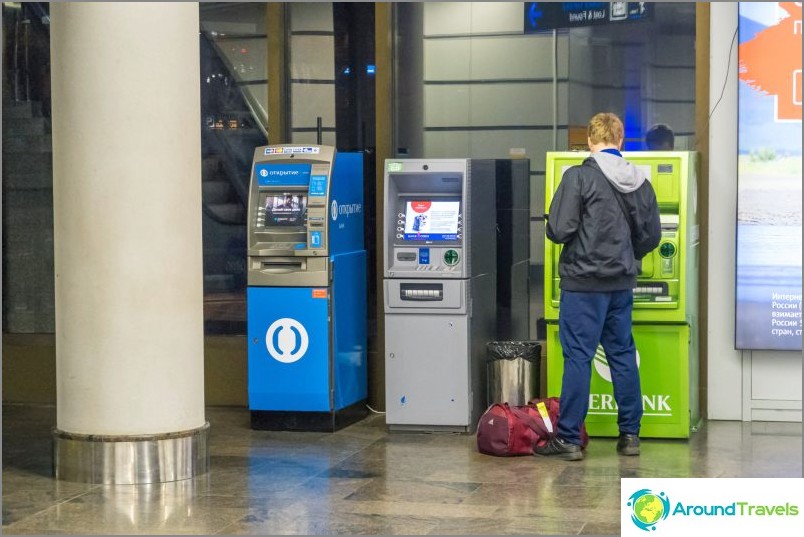 ATMs upon arrival immediately after leaving 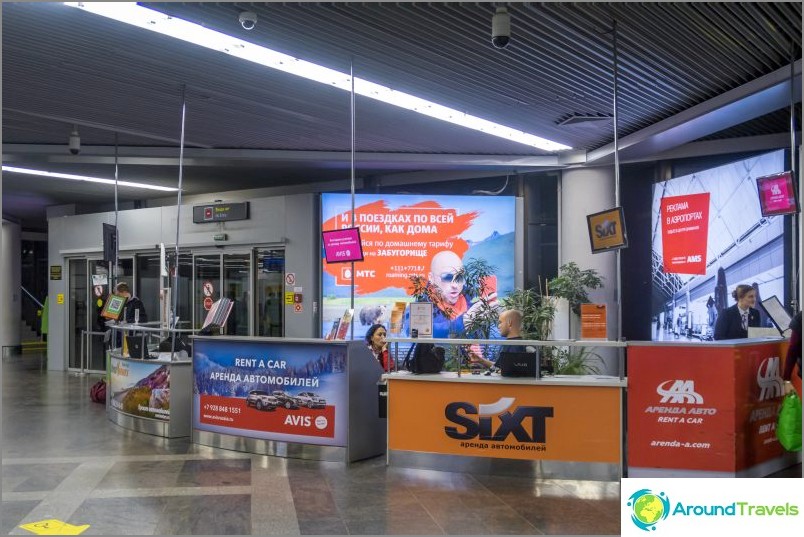 At the exit of the rack of rental companies

Table of discounts on flights to Sochi

How to get to the airport in Sochi and vice versa

As I said above, the airport in Sochi has its own railway line, which ends next to the terminal. You can easily find the hardware station by following the signs, so there is no need to write any special instructions.

High-speed electric trains run from the airport to the Adler railway station on a schedule that changes periodically and it is better to watch it on the side of the Russian Railways. It takes about 10 minutes to get to Adler, and almost an hour to Sochi.

With transportation to Krasnaya Polyana from the airport, the situation is much worse, there is some kind of muddy schedule, only a few trains a day. It is not clear whether it is generally tailored to the arrival of flights or not. Therefore, I usually take either a taxi, or a rented car, or car sharing.. 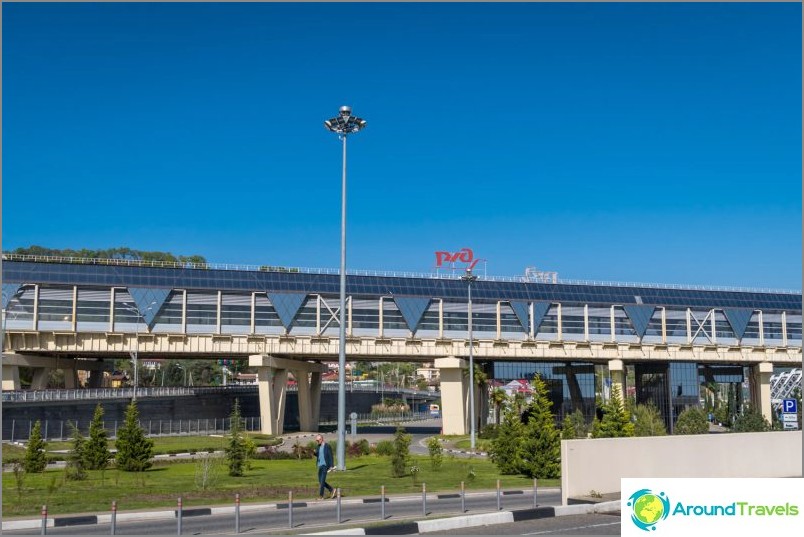 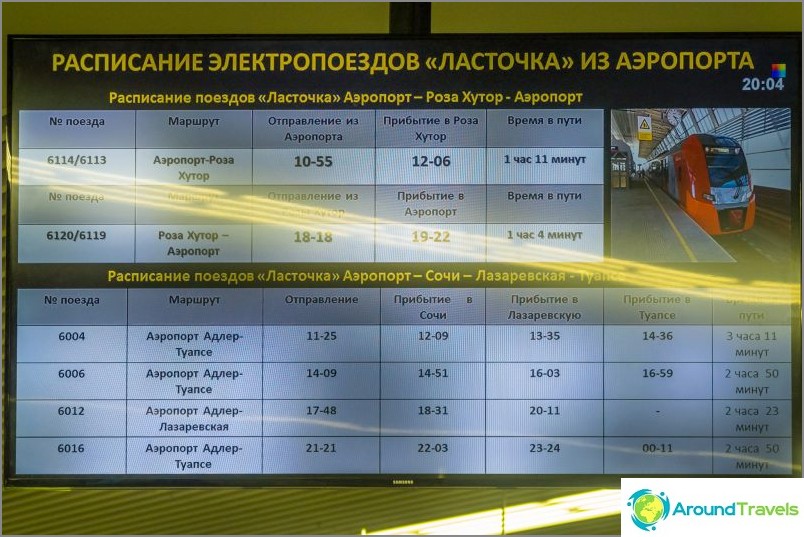 Buses from Sochi to the airport

Transport starts running from 6 am, the last flight - after 11 pm. City buses and minibuses stop at Sochi airport every 10-30 minutes, the intervals directly depend on the season.

Here you also need to take into account that the airport is not the limit of the Universe and not the final station of routes, so listen carefully to the stops, otherwise you will drive somewhere to Rosa Khutor.

In addition to the racks of rental companies, which will meet you as soon as you leave the arrivals area, the most popular way to get out of Sochi airport towards the sea or the mountains is by taxi. Average price - 1500 rubles per car.

You can negotiate a transfer with the hotel of residence or the owner of the home from whom you rent an apartment, you can bargain with taxi drivers on the spot, you can pre-order a car with an adequate price for travel from Kiwitaxi. Their cost starts from 1100 rubles.

Taxi from / to Sochi airport>

First aid kit for travel and at ...