Since we could not fly to Singapore, I decided to look for how to return tickets from AirAsia. It turned out that there was no way to return tickets, but only taxes could be returned. Since the procedure is quite simple, then a couple of thousand baht will not be superfluous. True, it all dragged on for me and took more time than other people. Here's my quick guide.

How to return tickets from AirAsia

As I said, only airport taxes are refunded, which sometimes can be almost the entire cost of a ticket if it was purchased for a promotion. Otherwise, about 20-50% will return. I also googled and found out that if you take the insurance imposed by AirAsia when buying tickets (usually they refuse it), then you can return the entire amount for a good reason - such as going to the hospital. But I, like many, refused this insurance, because we had our own insurance. But in any case, despite the fact that the son was in the hospital, we would not have been able to return all the money, since on the date of the flight, the doctors had already allowed him to fly, that is, they would not have given a certificate.

You can apply for a refund of cathedrals only after all the flights from your booking have taken place, not earlier. You will be warned about this on the website. Guests who have missed their flights (international sectors only) are entitled to the airport tax refund. Please ensure that all flights in the booking have departed if you are submitting this claim.

Go to the page and fill out the form. Everything is pretty simple there, but below I attach a screenshot just in case. The text of the message itself, I think, is not particularly important. I just wrote: «Hello! I would like to refund TAX for flights FD376 and FD 377.» 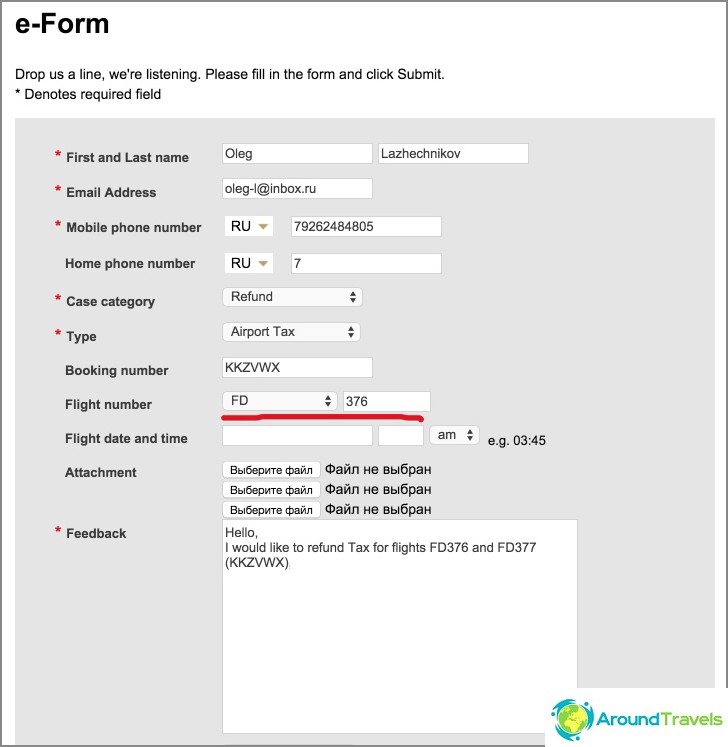 How to fill out the AirAsia ticket refund form

An important point! Although there is no asterisk indicating a mandatory item, the form asks for a mandatory flight number. Moreover, you do not immediately understand what exactly needs to be done, because the message is issued like this «Please fill in Carrier Code». Try to guess that the carrier code is the letters FD.

You will not immediately understand what exactly is wrong

If you paid with a regular bank card, then you do not need to fill in the fields below. Everything will return to the card with which you paid. 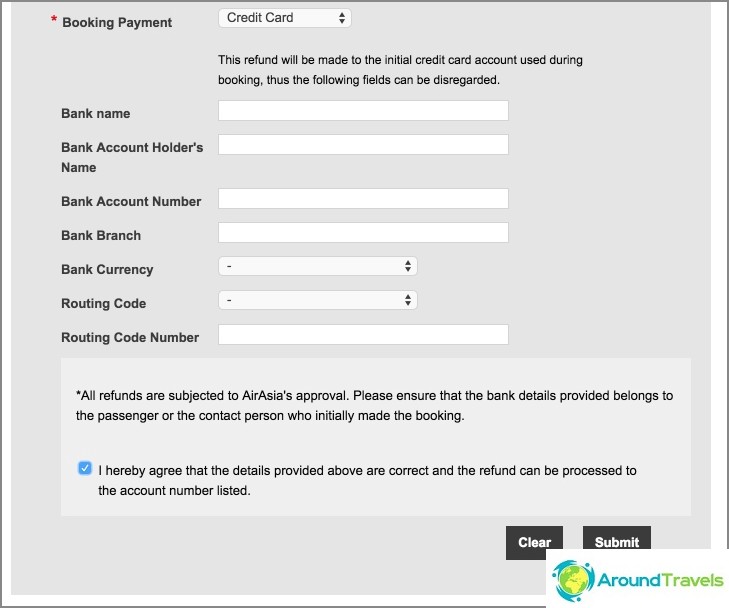 Here we leave everything as it is

We are waiting and checking the status

On March 12, I sent a request to the site. On the 13th, a letter arrived that the request had been received. I waited 2 weeks, no new letters came, the status of my case remained N / A. The status can be checked using this link by entering either the booking number or the request number (it will come in the first letter). By the way, when I did all this, the link to My refund status was easy to find on the site, now, when I write this post, it was hidden somewhere, so you can use my direct link. 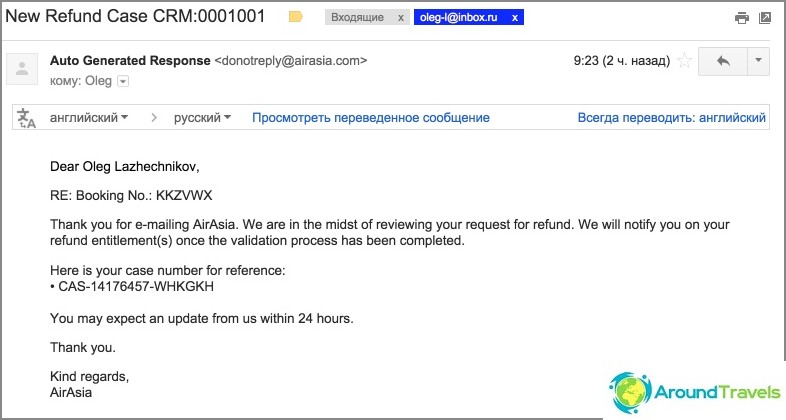 The very first letter, the request number is assigned in it

Maybe you just had to wait, but the blogs wrote that a letter with an answer whether the fees would be returned came almost a few hours after the first letter. Therefore, on March 28, I sent another request. But a day later, a letter came that it was closed, as it duplicates the previous one. Then I dug up their live chat, and wrote there after 30 minutes of waiting for my turn that, they say, guys, I've been waiting for 2 weeks. I was told that they would forward the request to the appropriate department with a note «urgently». I don't know if this played any role, but a couple of days later the same cherished letter came that the fees would be returned, wait. By the way, writing in live chat is not a trivial task, the screenshot below will make it clear why 🙂 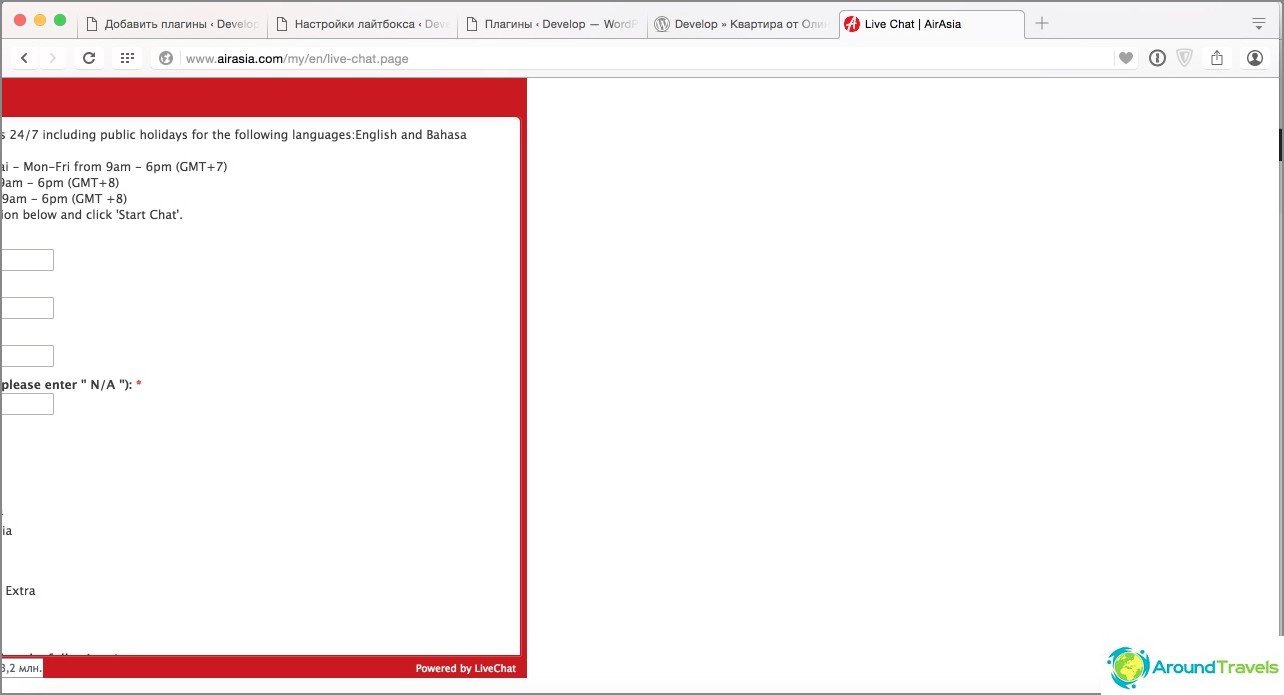 Try to write in such a livchat! 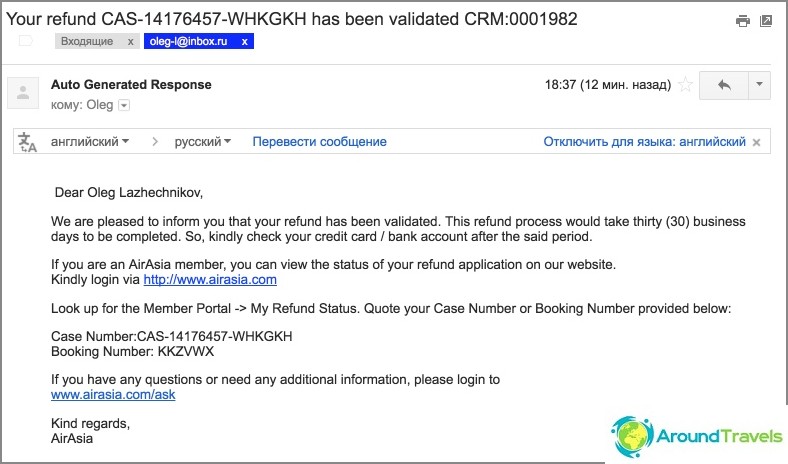 A letter confirming that the payment will be made

On the site, the status of the request changed from N / A to In Progress

I already thought that this was all, but a few days later (on April 5), a letter came from AirAsia that the payment was sent to the bank, they say, periodically check your card with which you booked the ticket. Refund status on the site has changed to «Approved. Submitted to Bank». And on April 12, the money fell into the account. In total, the whole procedure took a month.

I was interested to check how much I had and how much was returned. I bought tickets for 3 people and gave 10138 baht in total. They returned 4998 baht (9605 rubles came to the card), that is, almost 50%. Not bad! But it’s a pity they squeezed for the luggage, it would be logical to return for it, although it seems to be included in the price of the ticket itself, and not in the fees. Here are screenshots of the itinerary receipt (on the website) before and after. 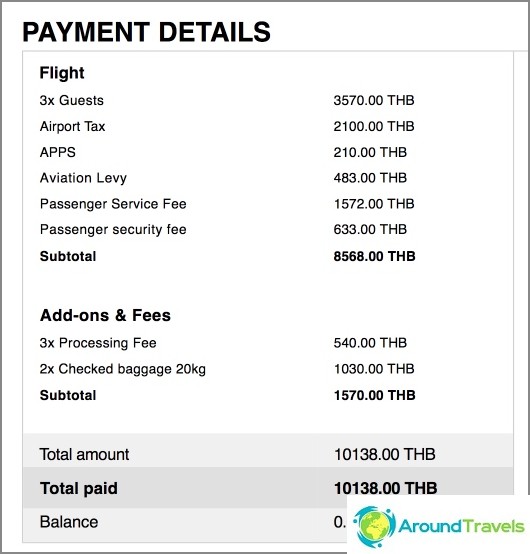 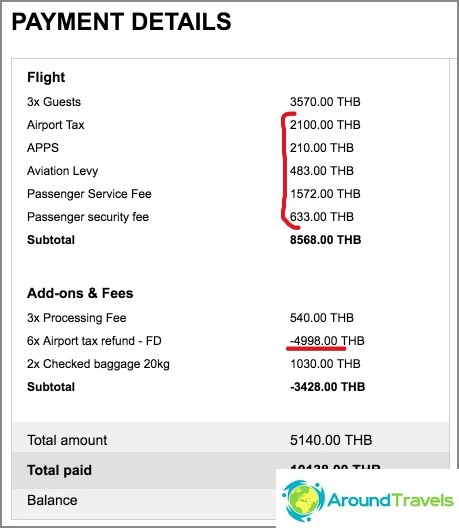 But how much was returned and what fees

P.S. In my opinion it was worth the trouble 🙂