Home › New articles › What to see in Crimea - TOP 10 attractions

What to see in Crimea - TOP 10 attractions

In Crimea, there is quite a lot to see in terms of attractions, ranging from natural beauty to fortresses and rock towns. I am more interested in natural ones, and therefore I most often go to Crimea on some kind of hike, where you can enjoy the mountain views to the fullest. Nevertheless, there are also cultural attractions that can be visited while on vacation in one of the resorts, or when traveling by car around the peninsula (either your own or rented). In general, here the choice is for a specific person..

For those who want to save time on preparing for the trip and immerse themselves more fully in the atmosphere and history of the peninsula, I would recommend using the services of an individual guide in Crimea. In my opinion, individual excursions are much more interesting than organized excursions with their large number of people and a hackneyed program. Moreover, with a private guide, you can always agree on a convenient time and day and adjust the excursion.

Below are selected high-quality author's excursions, see if something will suit you. First of all, pay attention to the excursion «Heroic Sevastopol».

What to see in Crimea

The swallow's nest is a castle over the sea, at the very edge of a steep cliff, a symbol of the southern coast of Crimea. Tall spiers and battlements can impress anyone. Even those who have seen the most luxurious palaces in Europe come to the Swallow's Nest to climb the balcony and, standing over the abyss, admire the sea. In principle, there is nothing else to do there. But you can listen to the history of the appearance of the castle from the guides, of course, this is a story of great love. And lovers of cultural recreation can enjoy exhibitions and concerts that are regularly held in the halls of the castle..

You can get to the Swallow's Nest by bus Yalta-Alupka or by boat from the seaport.

Chersonesos is a place that every historian dreams of visiting, but there are always fewer of them than ordinary tourists. These are not just the ruins of another ancient city. Chersonesos is a whole complex of buildings created at different times, but harmoniously merged into a single picture. Antique columns, narrow streets, amphorae are located next to the medieval defensive towers, and above all this rises a masterpiece of church building - the Cathedral of St. Vladimir. Chersonesus is located in the city of Sevastopol. 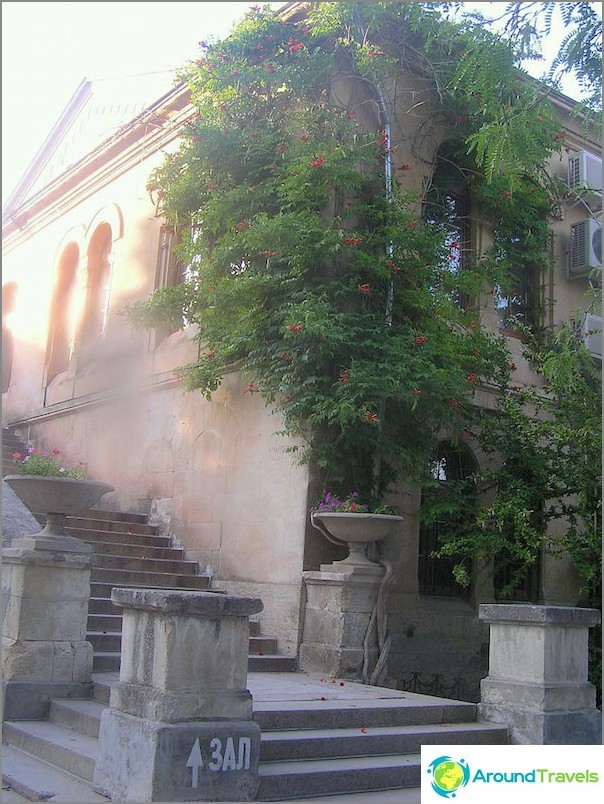 Not far from Feodosia is the village of Koktebel, in translation from the Turkic - the Country of Blue Peaks. An incredibly romantic and picturesque place where sights are located just at every turn. Fans of outdoor activities and clean azure beaches come here, and in September - also connoisseurs of live music: every year the famous jazz festival is held here, bringing together the best performers from all over the world..

A water park, diving and gliding centers, a dolphinarium, a dinotherium, Cape Chameleon, the Karadag Nature Museum, M. Voloshin's house-museum - this is not a complete list of the wonders of Koktebel! Nearby is also Mount Klementjeva - the most famous in Europe for the power of the updrafts. Here you can experience a study flight on gliders, hang gliders, paragliders and airplanes «Wilga» and «AN-2», as well as a parachute jump. No less vivid impressions await those who decide on a night boat trip to meet the sunrise at the Golden Gate cliff.

Dzhur-Dzhur is the deepest waterfall in Crimea, which does not dry out even in the hottest summer. It is located near the Generalskoye village in the Khapkhal gorge. The path to the waterfall lies along winding forest paths. Huge oaks, wooden bridges and benches, the murmur of the Ulu-Uzen River and the clean mountain air make the road to the waterfall an unforgettable journey. A cascade of jets of Jur-Dzhur breaks down from a height of 15 meters, stunning with rainbows and splashes. There is an observation deck behind a small log bridge. Not far from the waterfall is the Jur-Jur cave. 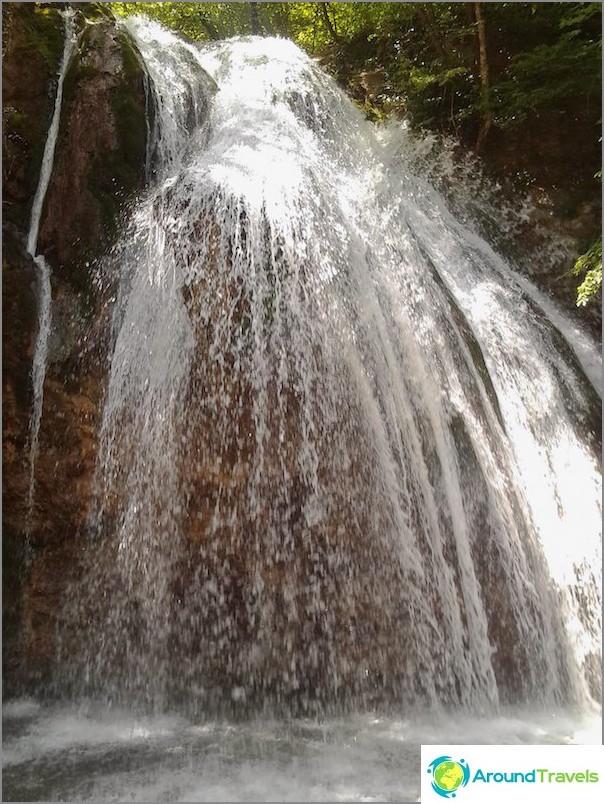 Vorontsov Palace is one of the most beautiful places in Crimea. It is a huge building of greenish-gray stone that has been under construction for 23 years. There are magnificent marble fountains in front of the palace, exquisite sculptures are collected in the conservatory and on the terraces of the southern facade. A garden is laid out around the palace on an area of ​​40 hectares. Exotic plants, lakes, grottoes, glades, thickets, magnolia and palm alleys, cascades, streams and heaps of rocks make this place look like a fairy tale. More than 200 species of rare trees and shrubs are collected here. You can get to the Vorontsov Palace along the Yalta-Alupka highway.

One of the most popular sights of Crimea is the famous Grand Canyon. All the picturesque nature of the pristine nature is revealed here: steep cliffs, rapid waterfalls, grottoes and deep gorges. A small piece of the lost world more than three kilometers long is hidden from civilization on the northern slopes of the main ridge of the Crimean mountains. Once upon a route our trip ran right through this very canyon, very beautiful, I hope to repeat somehow. 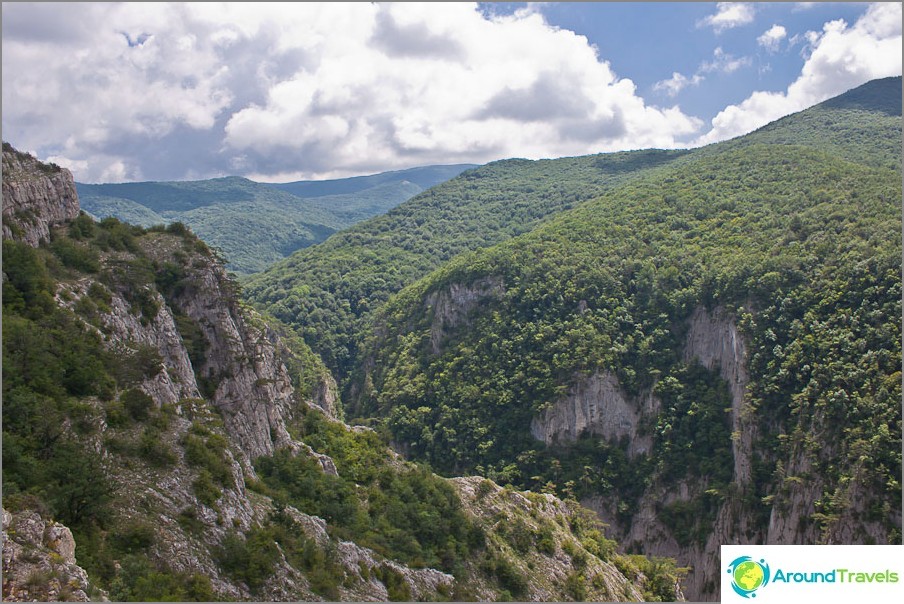 Grand Canyon from above 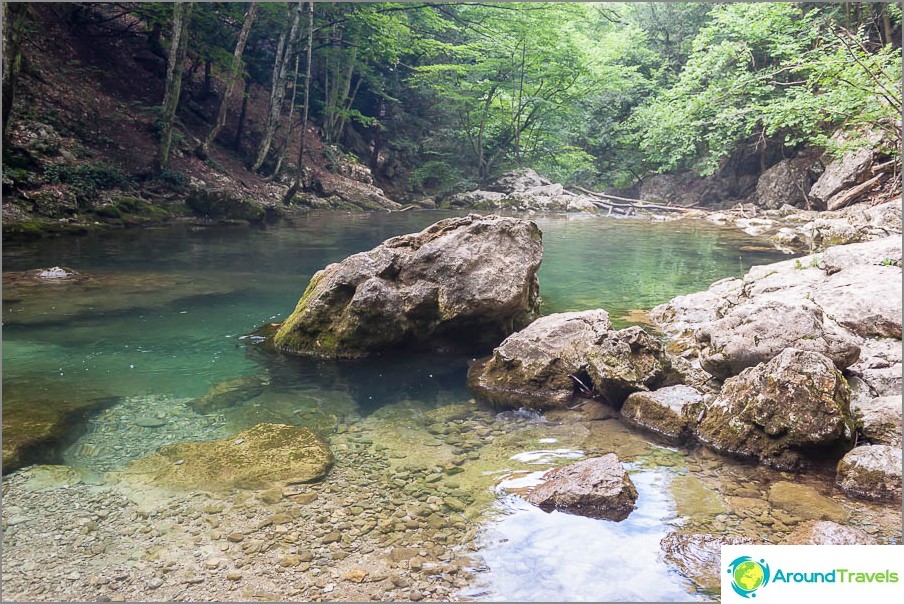 The Grand Canyon from below

The most popular sites in the Grand Canyon are the Pania Spring and the Bath of Youth. In the strongest summer heat, the water temperature here does not rise above 10 degrees. According to legend, anyone who plunges into the spring becomes healthy and young. You must definitely come up with something, only these legends are not original.

Nikitsky Botanical Garden is a masterpiece of landscape art. On an area of ​​40 hectares, there is a huge collection of rare flowers, lianas and shrubs, as well as tropical palms, giant sequoias, rhododendrons, magnolias, and yews of the preglacial period. Thematic exhibitions (tulips, roses, orchids, chrysanthemums and even live butterflies) are regularly held here, for the sake of which tourists from all over the world come to Crimea. Cacti and agaves grow on the stone slides of the park, lilies and Caspian lotuses bloom in the pools. In the tasting room you can taste not only traditional Crimean wines and balsams, but also exotic fruits grown in the Nikitsky Botanical Garden: almonds, figs, kiwi, ziziphus, fig, feijoa, olives.

You can get to the Nikitsky Botanical Garden along the Alushta-Yalta highway (M18): drive to the village of Nikita and, following the signs, go down to the central entrance to the garden. 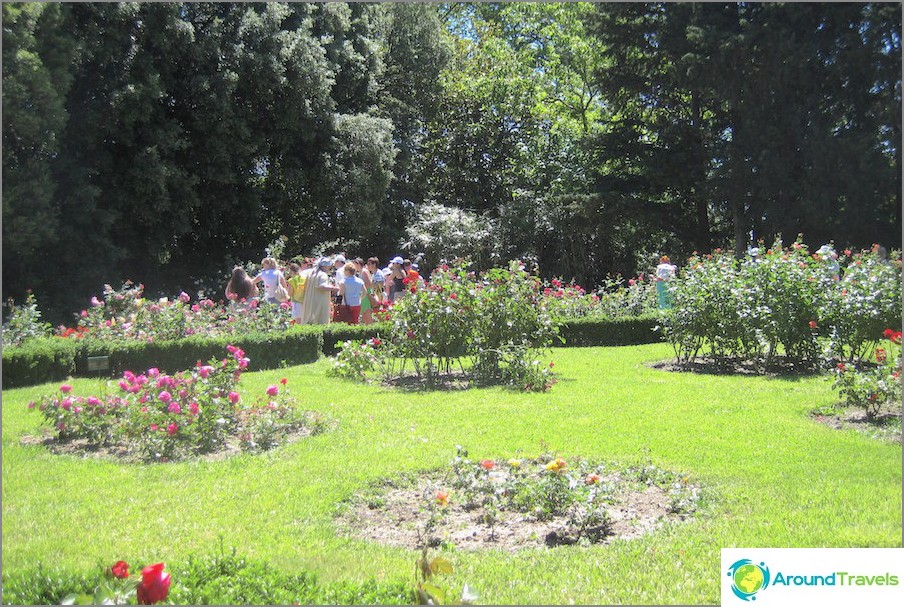 The Genoese Fortress is one of the most spectacular monuments of the history of Crimea. Built in the best traditions of the Middle Ages, it amazes with the perfection of engineering. The area of ​​the fortress is almost 30 hectares. Here you can see 15-meter defensive towers, jagged tops of the fortress walls, the Consular Castle, a deep moat, the Main Gate complex. Remnants of city blocks and peaceful buildings are visible between the defensive tiers. A historical and architectural museum is now open in the building of the former mosque «Sudak fortress».

In August, the festival of historical reconstruction takes place here “Genoese helmet”, where the masters of knightly art act out the events of the medieval era: courageous knights and noble ladies, battles and tournaments, artisans and gunsmiths - take the audience into the magical world of the history of Crimea.

You can get to the Genoese fortress by driving to Sudak, and then transferring to the minibus to the village. Cozy (stop «Fortress»). 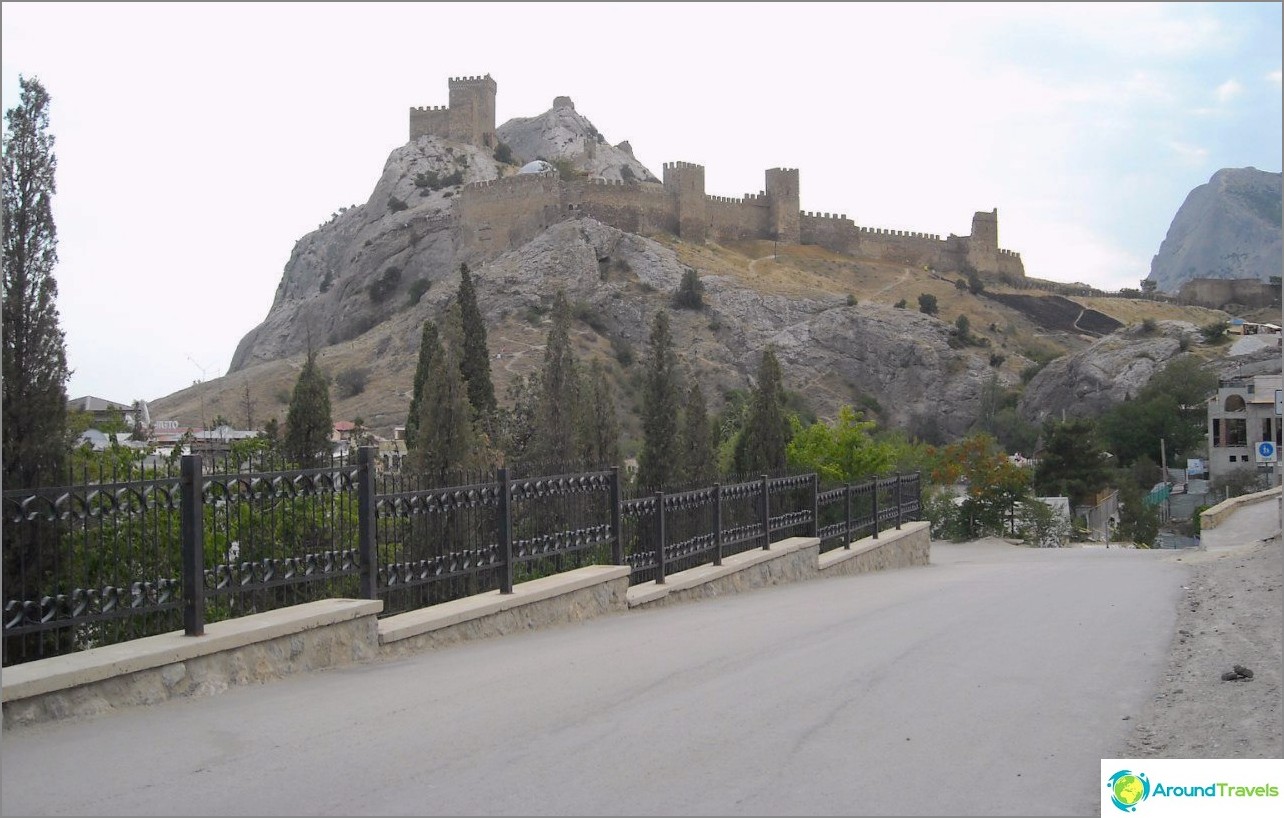 Ai-Petri is one of the most picturesque mountain peaks in Crimea. It is located near Alupka, in the area of ​​the Yalta nature reserve. You can climb Ai-Petri by cable car passing from the village of Miskhor. This road is one of the longest unsupported spans in the world, and climbing over mountain ranges is a lot of pleasure. The only bad thing is that there can be a long queue to the cable car during the season and we could not get on it. Since they were walking, they came to Aypetri from the Grand Canyon, and then went down on a regular minibus, and did not wait for the queue for the cable car. 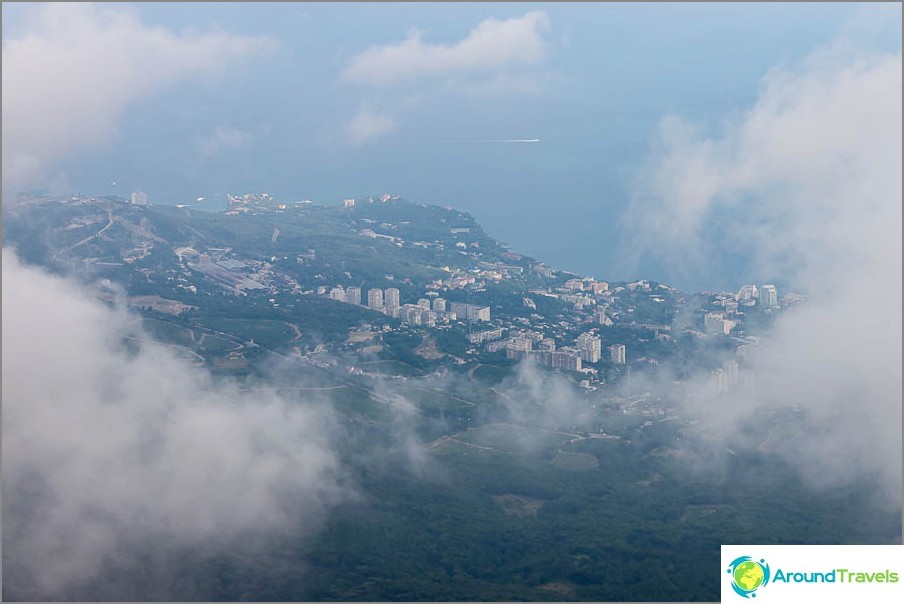 View of Yalta from Ai Petri

Rising to a height of 1200 meters above sea level, you can see a breathtaking panorama - from the observation deck or from the window of a cafe, where tourists are treated to delicious national cuisine.

On the Ai-Petri plateau, in addition to the unique nature of the southern coast, you can see meteorological stations, caves and a beech forest. Ride horses and camels. Descent from Ai-Petri leads to the highest waterfall in Crimea, Uchan-Su.
You can go down from Ai-Petri along one of three hiking trails: Koreizskaya, Taraktashskaya or Botkinskaya.

Taigan Lion Park is the largest wild animal nursery in Europe. It is located near the city of Belogorsk, next to the Taigan reservoir (turn to Aleksandrovka).

Here, on the territory of 32 hectares, 58 lions live in free conditions. Above the park, there are three-meter lattice platforms, on which visitors walk, observing the behavior of predators. Camels, deer, antelopes, parrots, giraffes, tigers and wild boars also live in the park's spacious enclosures. Children gladly agree to stroke huge lion cubs and take a picture with them as a keepsake (for a fee).
You can get to the safari park from Simferopol - by any bus that travels in the direction of Kerch, Feodosia. You need to get off in Belogorsk, at the turn to the village of Aleksandrovka. 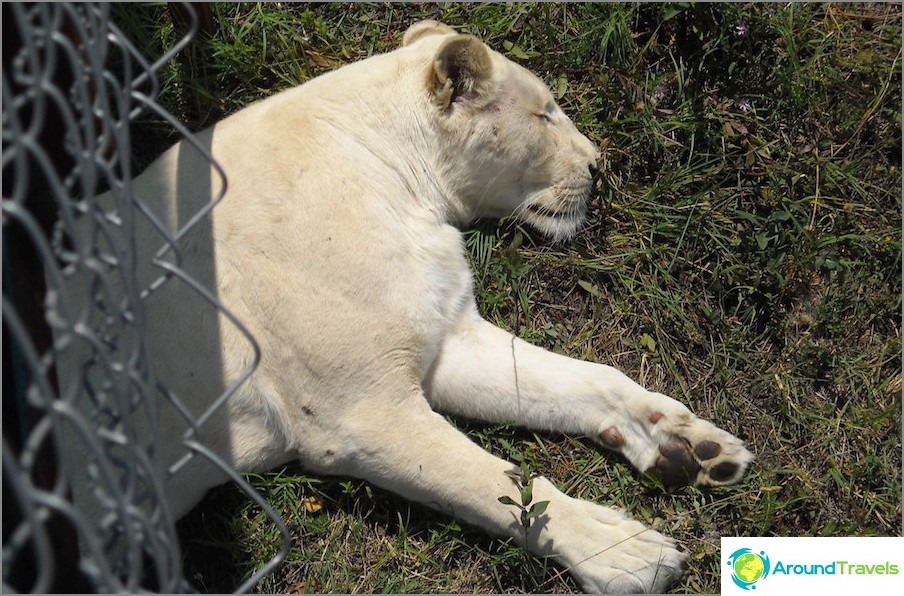 P.S. In fact, everyone can have their own list of the best attractions, so the post does not claim to be an absolute truth. Just in case, here's another link to my post about all the ways how to get to Crimea.