Ban Thai Beach is considered one of the most suitable beaches for mothers and babies in Koh Samui. It is located next door to Mae Namom, another beach, which has already firmly established a reputation for being a family. Despite the fact that both Bang Tai and Mae Nam are located on one side of the island and are separated only by a small rocky promontory, the difference between them is huge.

Ban Tai stretches one kilometer from Bang Po before Maenama. From the only road that leads to it to the dead end of this road near the colorful houses of the coastal resort, it is covered with amazingly fine, white sand with shells.

The cleanliness of the beach is maintained opposite the residential complexes and the Mimosa restaurant, after which this part of the beach is sometimes called. But there are some wastelands where construction is taking place and the beach in front of these sites remains untouched. As a rule, there is very little garbage from the sea, in contrast to human garbage left after picnics and rest..

During the high season, thanks to the popularity of the children's beach, a large number of children come to Mimosa with their parents, and there are always many mothers and children in the colorful houses and bungalows of the neighboring resort.

Ban Tai Beach itself is still divided into two distinct halves. If you look into the sea at the place where the canal for boats was dug, then the right half is covered with stones and boulders, and the beach is there, to put it mildly, for walking. But the left half, which goes along the Thai cafe, resort and restaurant Mimosa - sandy and crowded.

With low tides, the sea goes 10-12 meters from the coast, but nothing cardinal happens. The depth at Ban Tai balances between shallow and normal. An adult needs to walk thirty meters to be in the water up to the waist, and children have such a slope of the coast at the very time.

Judging by the fact that in some places the shore is fortified with concrete rings, and by how much the soil is washed between the palm trees on the shore, the waves flutter Ban Tai well in the rainy season. But on calm, windless days, there is no strong excitement on the beach..

The entrance to the water is hampered by the presence of underwater vegetation and stones, but there is a whole area on Ban Tai, with a completely clean sandy bottom, which is used by all local residents. Those who do not know about the secret can stop halfway, finding a good tree with a shade and swim, carefully looking at their feet.

There are sun loungers on the beach only at its very end, where the beach expands to forty meters and forms a sandy area, just opposite the clean entrance to the water, where the main party usually gathers.

But nothing is perfect. Along the entire beach, everywhere, except for the sandy area, palm trees and deciduous trees grow, some have hammocks and swings. And on the site you will either have to ignore the sun or take a beach umbrella with you.. 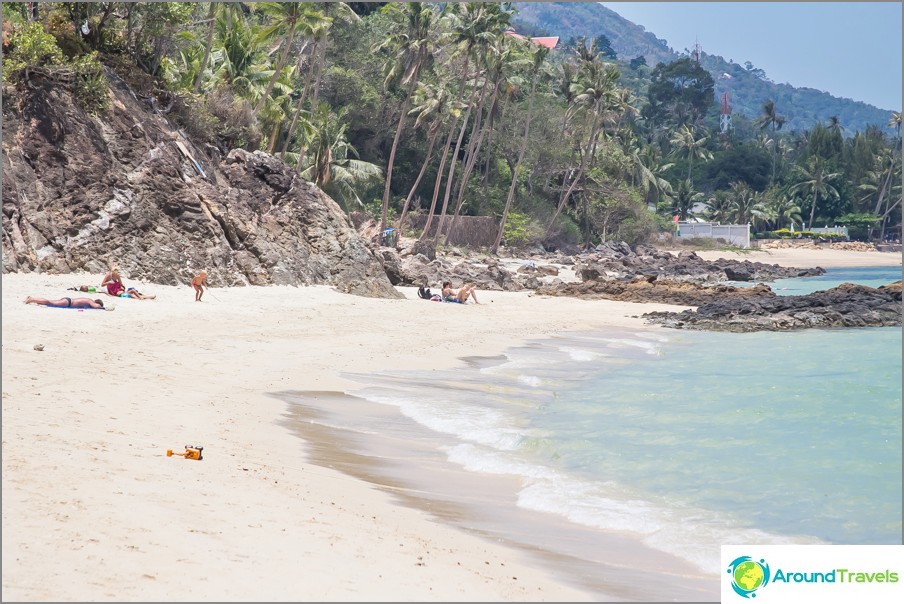 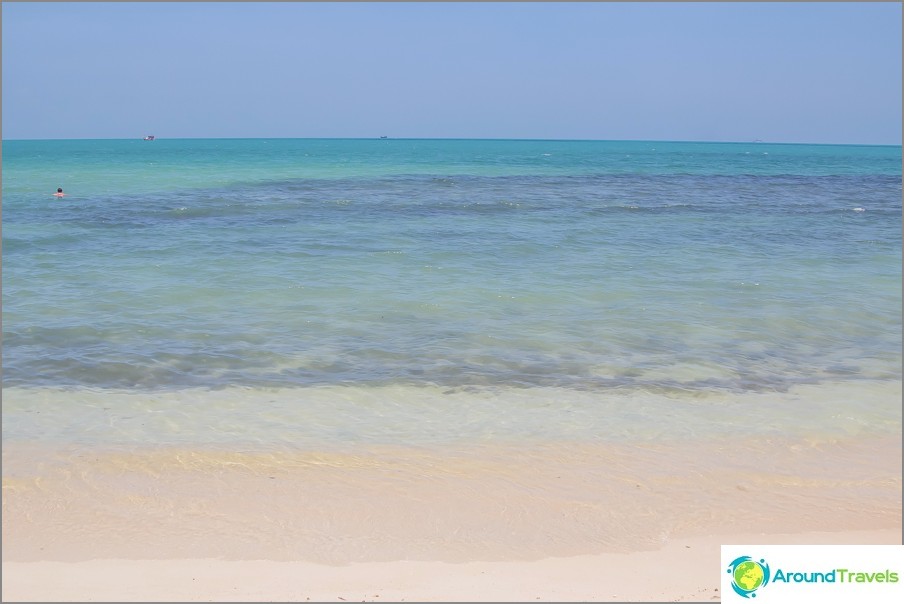 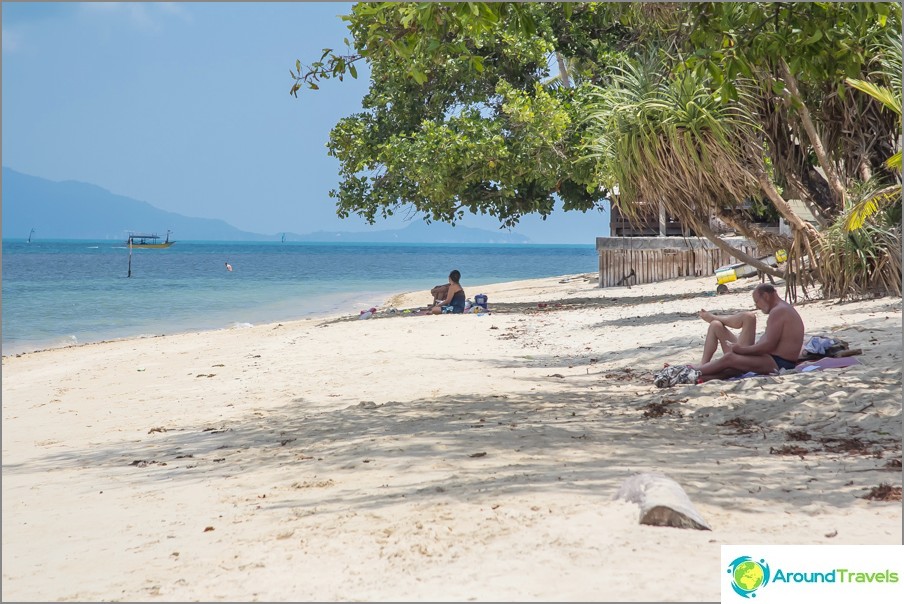 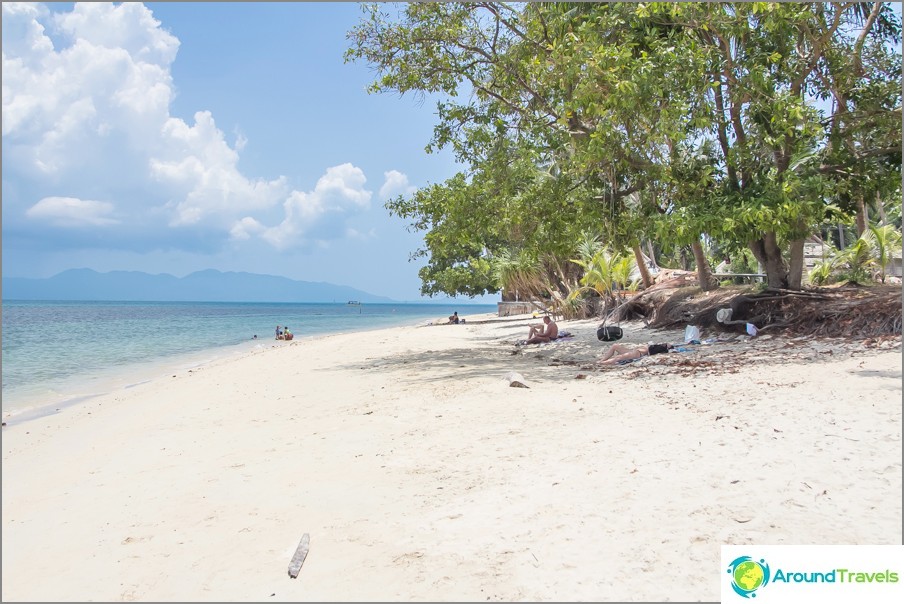 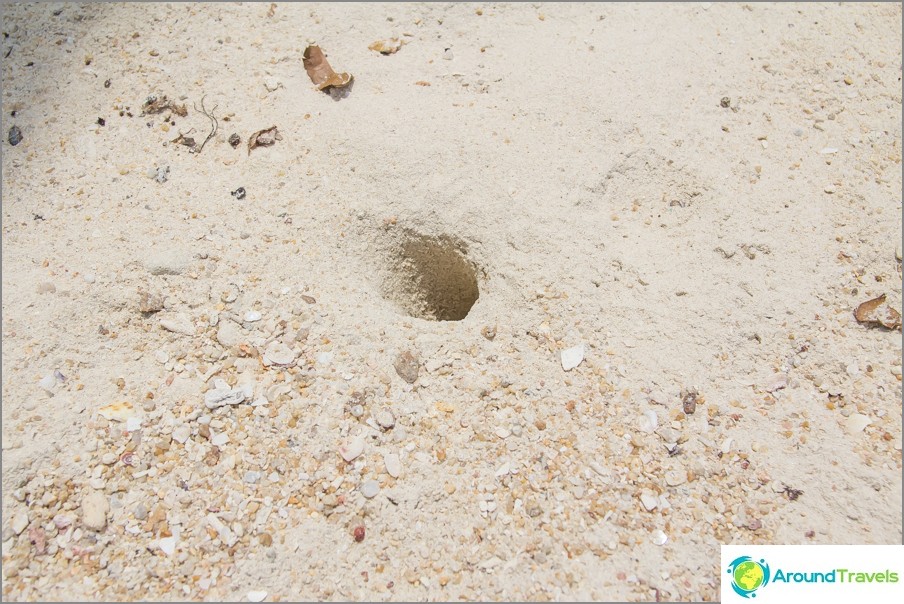 The entire infrastructure of the area around Ban Tao is dispersed along secondary streets and the sides of the ring road. Right at the turn from the roundabout there is a 7-Eleven mini market, a laundry, a water pump and a motorbike rental. Thai shops are on the road to the sea. You will have to take a car to the nearest hypermarkets and drive about forty minutes, provided that there will be no traffic jams, which have become a frequent occurrence on Koh Samui..

On the banks of the restaurant next to Mimosa, there are palm canopies right in the water. There is also a bowed palm tree with a sign «This is Samui», for a photo for memory. There are no more attractions on Ban Tai. 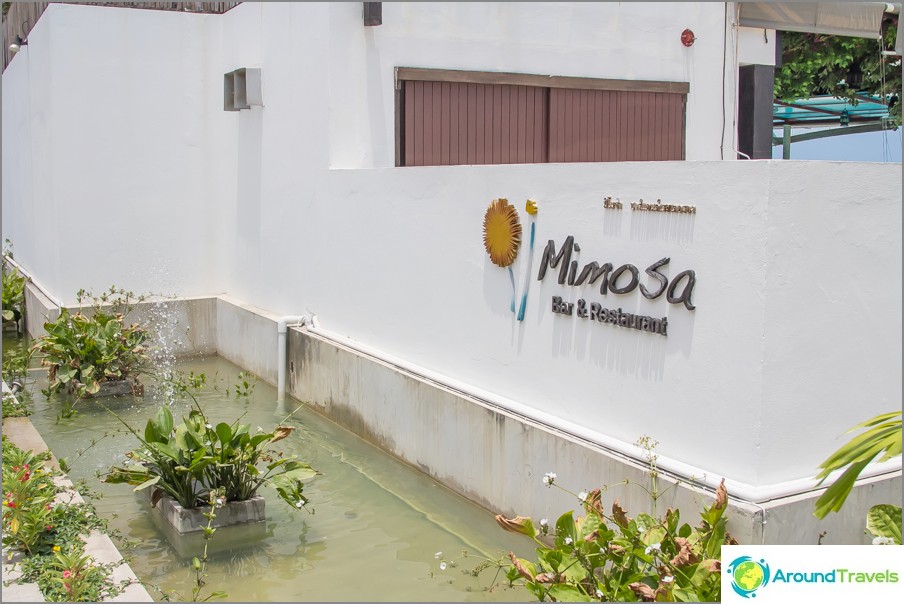 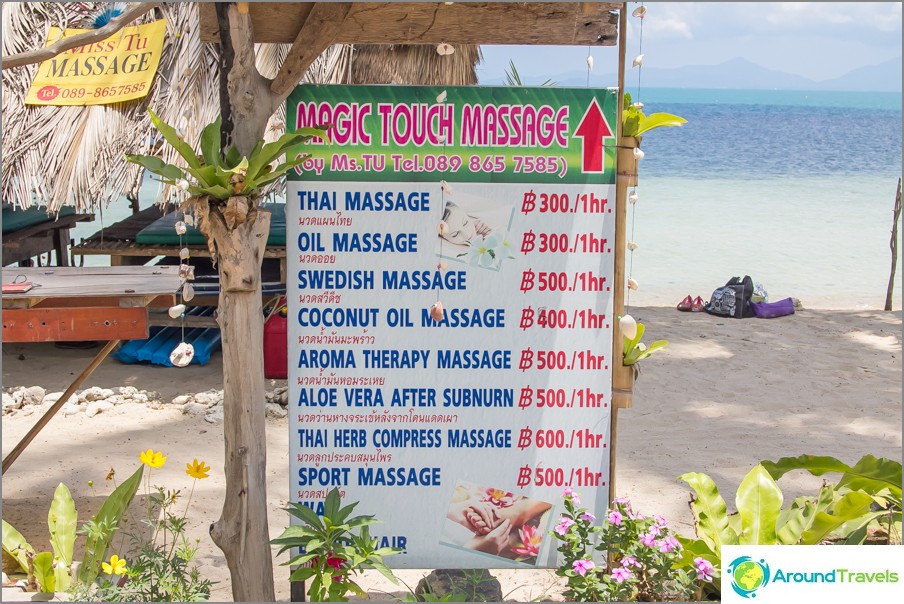 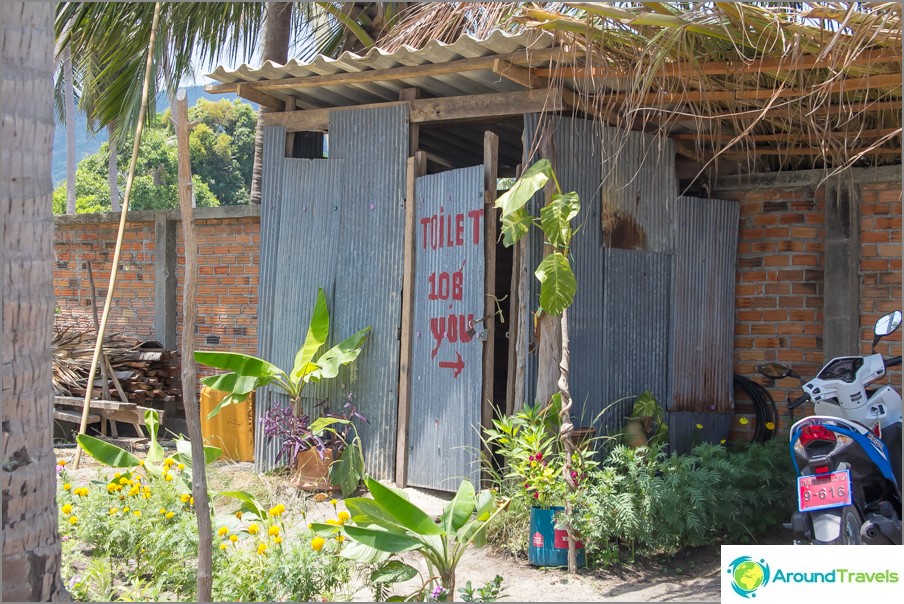 There are about fifteen different types of accommodation within a kilometer from Ban Tai Beach. The largest of them are Koh Samui Resort, Mimosa resort & Spa, Baan Kuasakul Resort and Baan Tai Tara 1. The Lotus Terraces stands on the rocky section of Ban Taya .

Private houses for rent are available outside the ring road, towards the center of the island.

Since there is only one road to the beach, you have to be careful when looking for an exit to the sea. Moving along the ring road, look out for the brown sign with the name of the Mimosa restaurant, which hangs directly opposite the secondary road. It is marked with a blue poster just in case. «This is way to the public beach».

After leaving the side road, do not turn off anywhere until you hit the sea and massage wagons. Turn left and continue until the next restaurant after Mimosa. Be sure to find a parking lot that will not obstruct your driveway. The fact is that the road along the sea is limited by barbed wire and signs «Do not enter, privat property».

And the width of the road does not allow two cars to pass. And if you leave the bike along the thorn or in the Mimosa parking lot, you risk finding the cut-up seat of the motorbike on your return. There were precedents, this is not a joke. 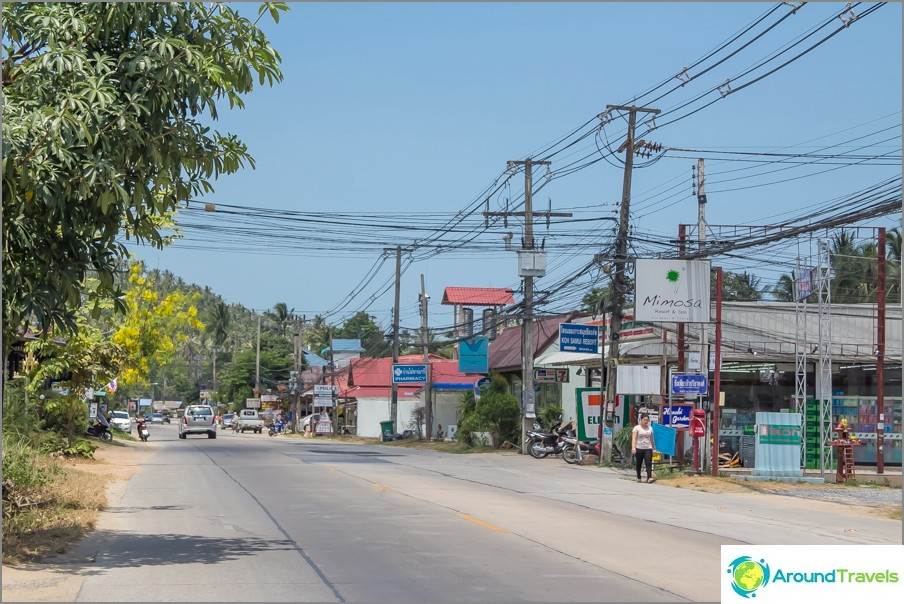 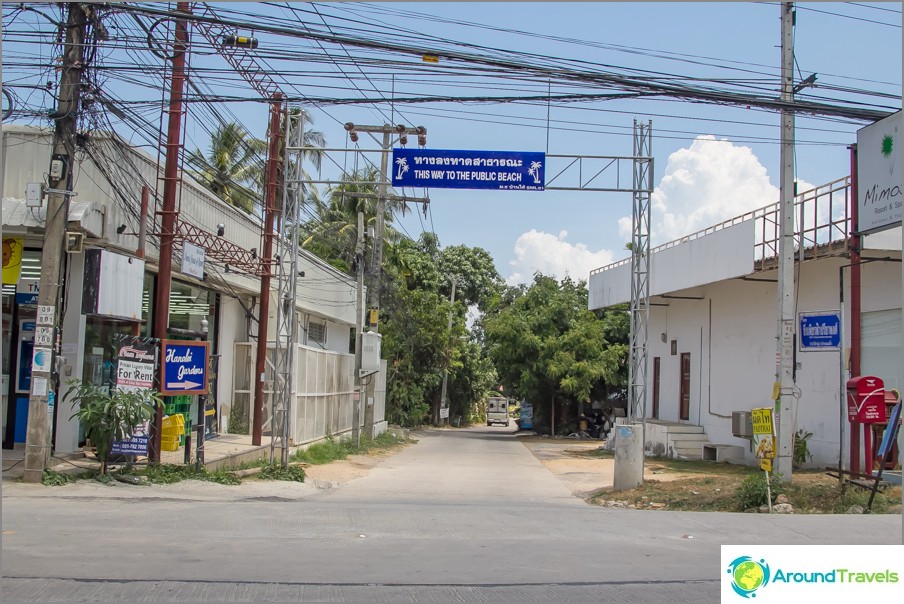 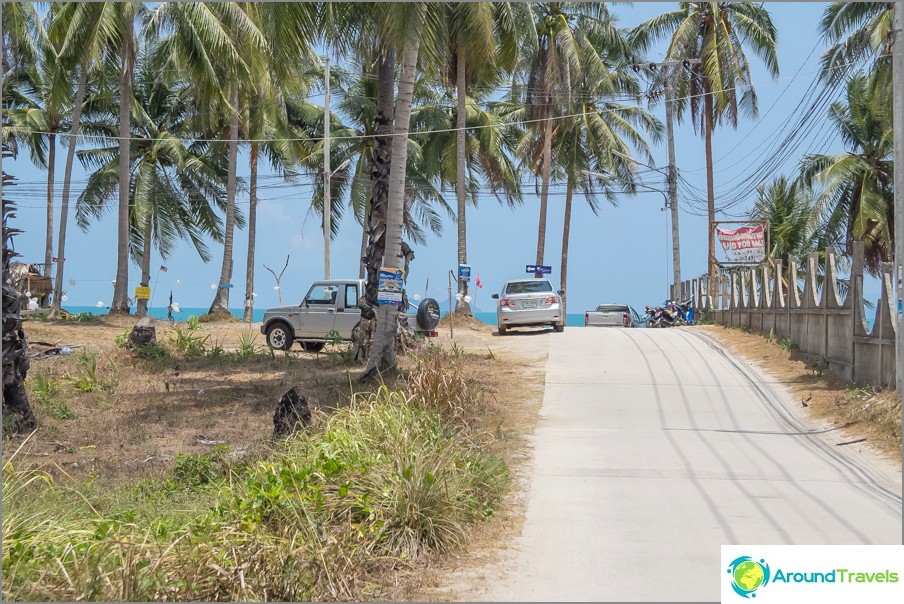 But there are more options on how to get to Ban Tai. For those who like to walk through the jungle and underground tunnels, I am telling you a secret place on the island. Exit the ring road where the marker is marked on the map, and then drive straight until you hit the gate.

This is the private territory of a house under construction, but the construction is frozen, and no one will stop you. Go around the gate on the right along the path, and after a hundred meters you will see a T-shaped intersection of dirt roads. Further, as in a fairy tale: if you go to the right, you will climb the mountain.

If you go to the left, you will get into the tunnel. The tunnel is long, about a hundred meters, passes inside the cliff and leads to a secret beach, which cannot be seen from Mimosa, and at high tide, access to it is closed by the sea. The beach will be littered with stones, between which you can find a place for yourself, or walk on foot to Mimosa about two hundred meters to the right. 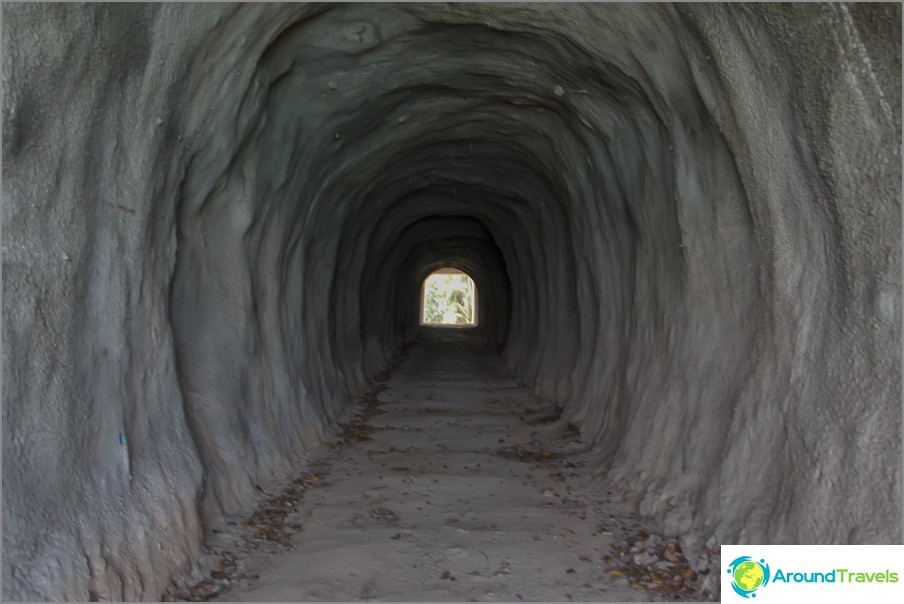 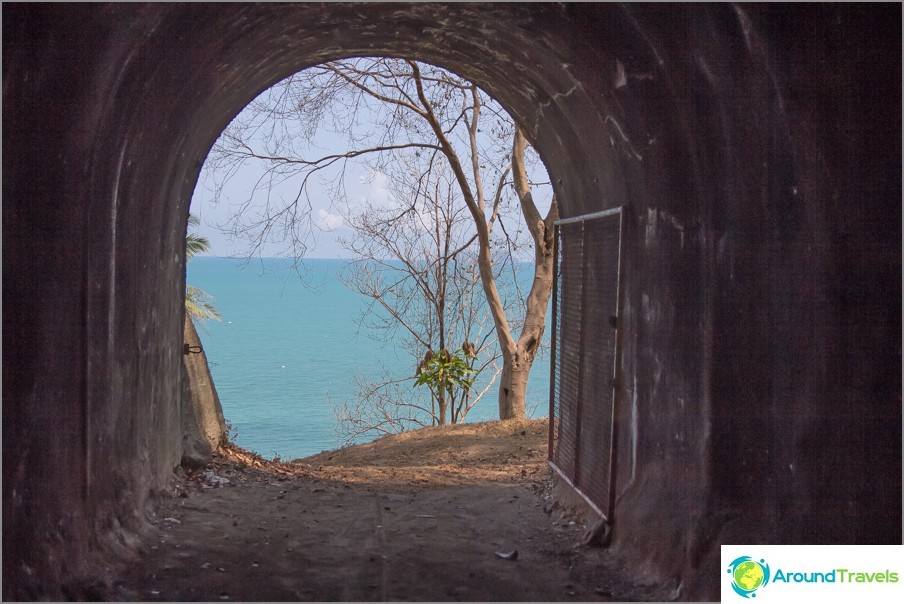 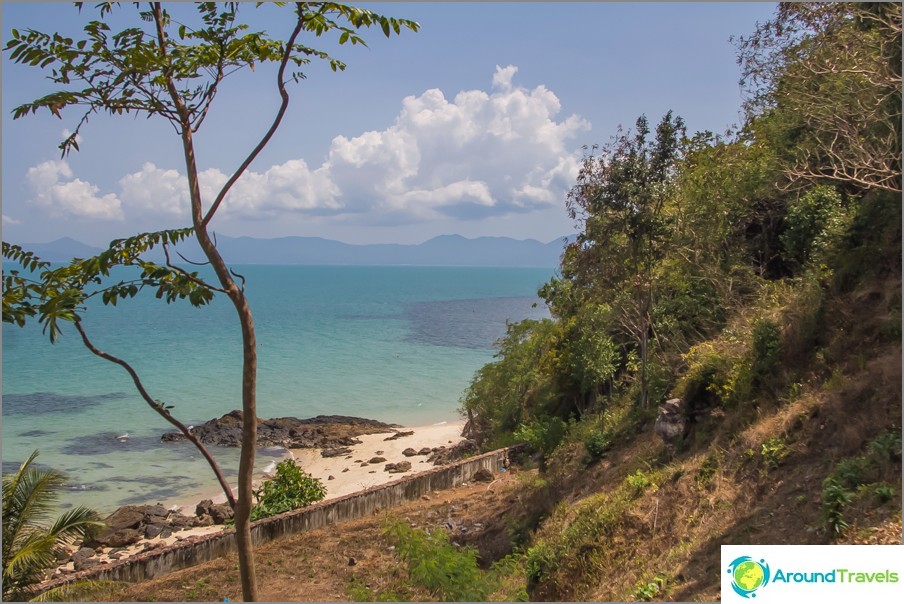 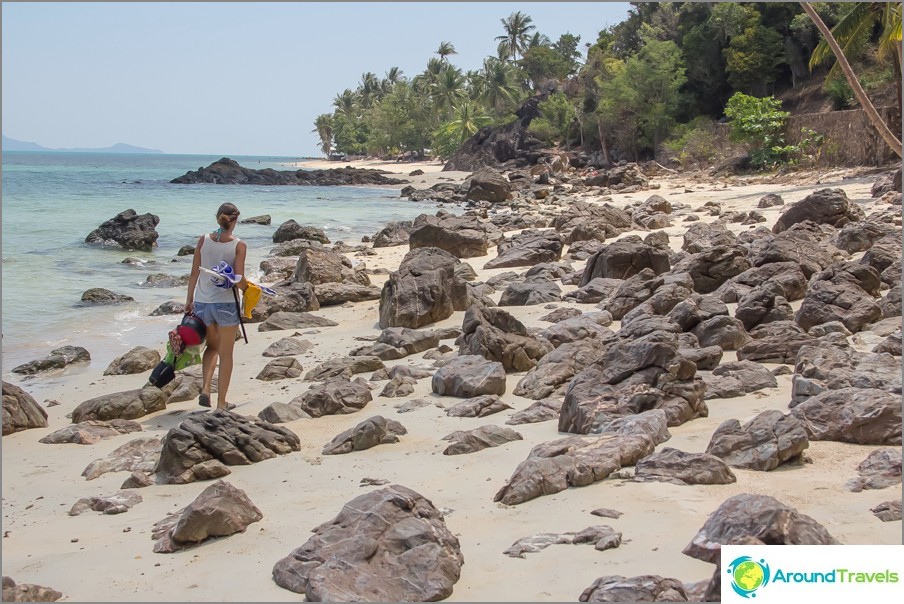 The best place to sunbathe is to fall under a tree before reaching the sandy area, in the shade indicated by a marker on the map below. There are never people here, and if there are, then the third family will simply not fit under the tree. And you can swim with algae, although, of course, the sensations are strange.