Recently I was asked to tell what first aid kit I have with me when traveling. Initially, it was generally very small until there was a child, but then it grew quite a lot in size. It is clear that when traveling to the sea, it is imperative to make medical insurance if you are traveling abroad, and it is the doctor who will prescribe medications for purchase at the pharmacy (and in some countries, medications are issued immediately when you visit a doctor).

When traveling in Russia, you can use the compulsory medical insurance policy, the main thing is not to forget it. However, I feel safer when the most basic and familiar medicines are at hand and you have access to them immediately..

My approach to drugs

Once again, it is advisable to make travel insurance in advance so that you can see the doctor so that he prescribes the necessary medications. Ask, why then drag all this on a trip? Yes, you can not take it. But it is calmer and more convenient when the main things are immediately at hand

For example, in Poland, the doctor prescribed everything that was already in the first-aid kit, and did not have to go to the pharmacy. And in any case, you must have antipyretic in order to wait for a call to the hospital or the arrival of a doctor. Well, and you can sometimes be on the road when the doctor is very far away, at least you can try to do something..

I remember in China, the first-aid kit was very useful, since in our «the village» it was somewhat problematic to get medical help and buy something at the pharmacy. Also, I still have a habit of rechecking everything that is prescribed to us, and consulting with someone else about the correctness of the appointment. By and large, the scheme of action in simple cases is already known and only an intramural diagnosis is needed..

Honestly, it seems to me that parents are better off keeping their guard and knowing at least the basics. For example, if a child's cough is wet and he clears his throat, he does not need to give him a mucolytic, which increases the amount of secretion, a small child can «choke».

First aid kit for a child on a trip

If you are in Asia, remember that with Dengue fever in no case should the temperature be brought down, with anything other than PARACETAMOL. By default, before finding out the diagnosis, always knock them down first. Well, in general, it is considered better for children than the same Nurofen.

Antipyretic
- Syrup with ibuprofen (Nurofen) for a child, Nurofen tablets for an adult
- Syrup with paracetamol (Eferalgan, Panadol)
- Candles Cefekon with paracetamol. Others are possible, it's just a cheap analogue, they are used if the syrup cannot be given..
- Suppositories Papaverine, used in conjunction with Cefekon

Antibiotics
- Antibiotic Amoxiclav or Augmentin.
- Antibiotic Zedex.
You can also take Sumamed (Azithromycin), but it is quite strong and you shouldn't drink it just like that..

With a runny nose
- Drops Nazivin or any other vasoconstrictor in a concentration suitable for children.
- Saline solution (although on a trip it is easier to just dilute salt water on the spot than to drag saline solution).
- Rinoflumycin drops, anti-inflammatory / mucolytic and mild vasoconstrictor effect. Very young children are not worth it.

When coughing
- Solution Lazolvan (Ambrobene), it can be drunk simply in the form of drops, and in the form of inhalations in a nebulizer
- Berodual solution for a nebulizer, it is not advisable to use it just like that, a strong drug.
- You can also take a cough suppressant syrup (dry, unproductive), such as Sinekod, but we usually do not take such.

With otitis media
- Battery powered otoscope. Probably, ordinary children can not take it, but deaf people often cling to otitis media.
- Otof's drops, an antibiotic, is also used for perforation of the tympanic membrane.
- Otinum drops, anti-inflammatory and analgesic action.
As a rule, we have these two names with us, it is very desirable to take them at sea, since it is easy to get an infection in the ear there. But the popular and well-known Otipax is a rather useless thing, since it is just an analgesic and is needed only for pain. It is better to use Otinum instead, which also has an anti-inflammatory effect..

For the stomach
- Smecta in sachets, suitable for both children and adults, much more effective than activated carbon.
- Rehydron in sachets
- Creon

For inhalation
- We have with us portable nebulizer, into which, when coughing, you can pour Lazolvan, ordinary saline solution, Miramistin and, in extreme cases, Berodual.
- An asterisk or some equivalent with eucalyptus oil. As a rule, these are hot steam inhalation. The same star can be used to rub the throat, heels, nose.

Other
- Miramistin, antispecialist. Can be sprayed on wounds to decontaminate, as well as in the nose and throat.
- Hydrogen peroxide.
- Several types of plaster.
- Sterile bandage in a pack.
- Iodine in a special bottle so that you can use it right away, or a pencil.
- Tiffirub, a kind of analogue of an asterisk, only less irritating to the skin and can be smeared right inside the nose (I often use it myself).
- Dexpanthenol or Depanthenol cream.
- Sun cream with a high protection factor.
- Melatonin (Melaxen), helps with jetlags for both children and adults.
- Chamomile bags.
- Digital Thermometer (thermometer and other travel gadgets). 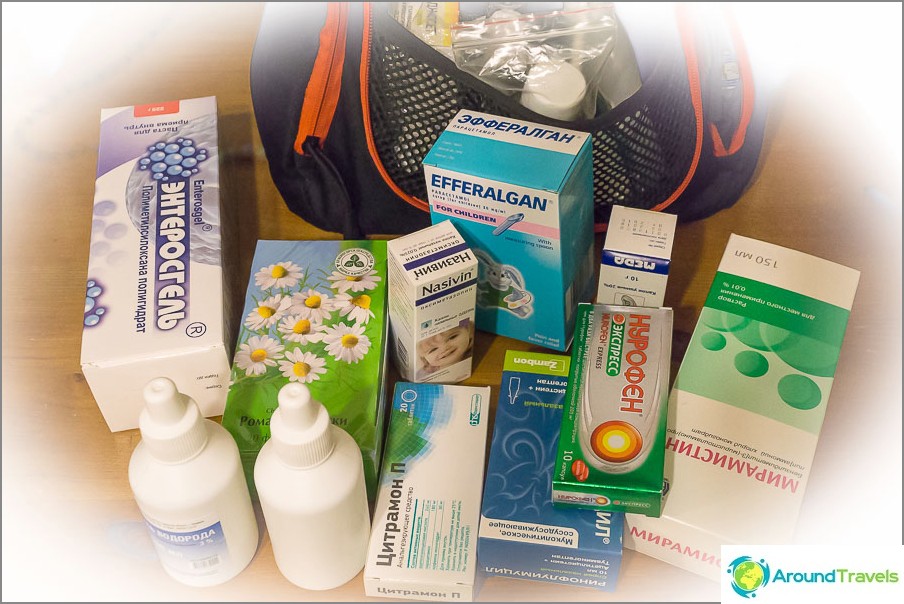 First aid kit for a child on a trip

What I take for myself in addition

No wonder I named the post «first aid kit for an adult», therefore I myself use the same medicines as the child. For myself, I take almost nothing separately, and so there is a complete set 🙂

- Ibuprofen / Nurofen tablets for pain and fever. And I also take Citramon for myself, my head passes best of all from it.
- Faringosept tablets from the throat.
- Furacilin tablets for rinsing the nose and rinsing the throat, although in general you can do it just with water and soda), but furacilin somehow helps me more. Or miramistin, but it is liquid and heavy.
- Drops Sanorin or the same Nazivin for the nose.
- Noshpa tablets.
- Enterosgel.

Separately about the thermometer

They asked about the thermometer, I decided to add it straight to the post. I use electronic, as glass ones, even mercury-free ones, break. Moreover, at one time I could not find something without mercury in any nearby pharmacy. So, there is a problem with electronic thermometers - they show God knows what.

I bought 4 electronic thermometers (one of them measures the temperature on the forehead and in the ear - it turned out to be the worst of all), and then each test in the normal state of a person and in case of illness, that is, I took measurements and compared them with an ordinary mercury thermometer. The AND DT-501 thermometer showed exactly and always the same thing, however, you need to wait a few more minutes after it squeaked. And more or less works this, I wrote about it separately, it can be reconfigured. 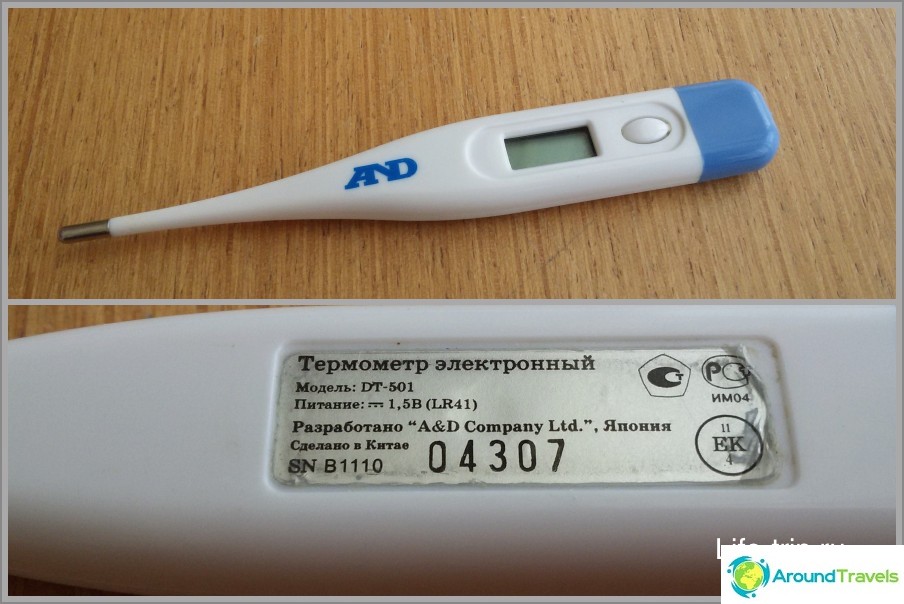 P.S. It seems that I have not forgotten anything ... And what do you take with you on the road??