There are several hot spring spots in Krabi, but the ones I came to are considered the most pop. Google knows this location as Krabi Hot Stream or Hot Springs Waterfall. Hot Springs is a cascade of fonts vaguely reminiscent of Turkish Pamukkale, only small and not at all snow-white. Hot water flows directly from the ground, and in different hot tubs the water temperature is different. When planning a route, keep in mind that there are also Solein Hot Spring salt water springs 20 km from here. There is an opinion that they are more beneficial to health, tourists are not brought there so actively, and the place is considered purely Thai. So, you should go there if you are looking for authentic, non-tourist attractions.

So, what are the thermal springs in Krabi (Namtok Ron Waterfall, Khlong Thom Hot Waterfall, Hot Spring Ron Waterfall), yes, this place has a million names. This is a closed park area, with its own parking, shopping malls and restaurants near the entrance gates. There are several administrative buildings, a spa hotel, small pools near the entrance to the hot springs and a large playground. Pools are a light version of the springs, more comfortable and less hot. People sit around artificial reservoirs filled with the same water as in the waterfall. Someone is completely immersed in water, someone is limited only by their feet. On the territory there are cement paths with tiles as decoration, and in some places the path is replaced by laid out stone slabs. Looks shtetl, but cute.

There are a lot of people in the pools, but they are less popular than Ron Waterfall itself - a hot waterfall. I didn’t take a bath either in the pool or in the hot tubs, because for me it looked like a dubious pleasure, because the heat was about 30 degrees outside. And hot water in such weather is not at all refreshing, but rather the opposite - I risked being cooked completely. In principle, to prevent such cases, a sign hangs near the waterfall, where it is written how long you can sit in the water without health consequences. The recommended cooking time of a tourist is no longer than 15-20 minutes, but people sit there for hours, without getting out.. 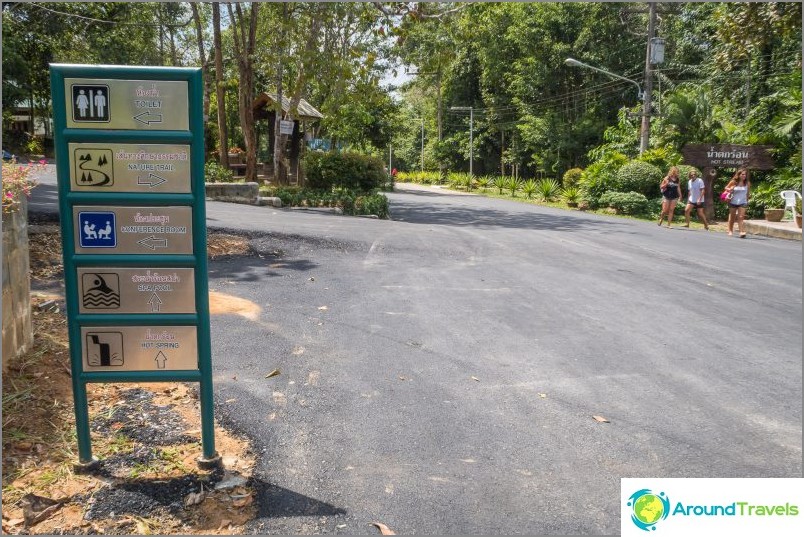 From parking to springs on an asphalt road 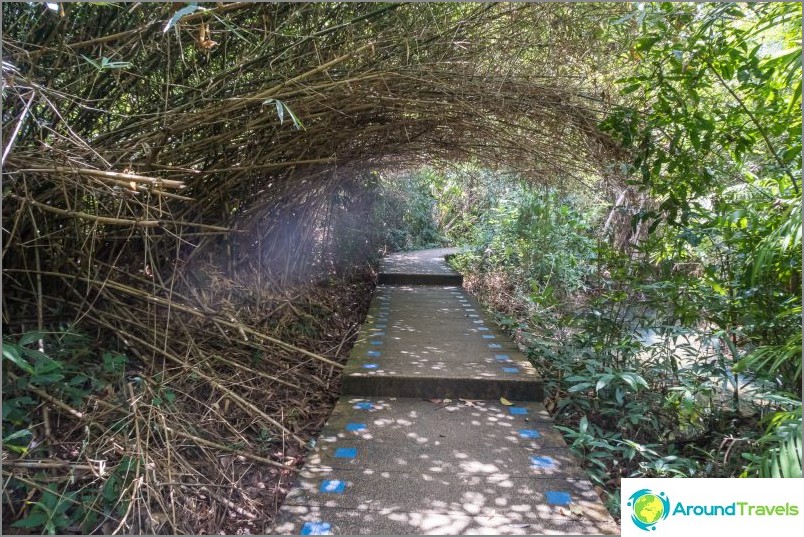 Or by Natural Trail 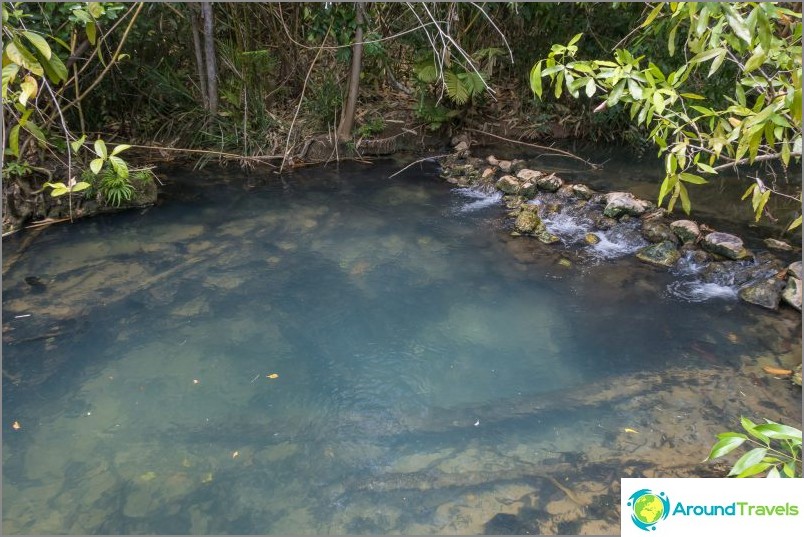 In some places along the path, there are such dams. 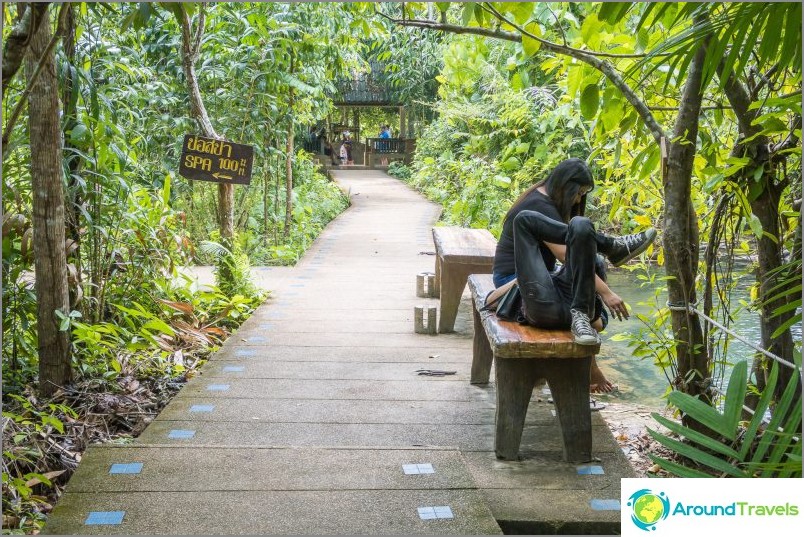 And the Thais in strange positions 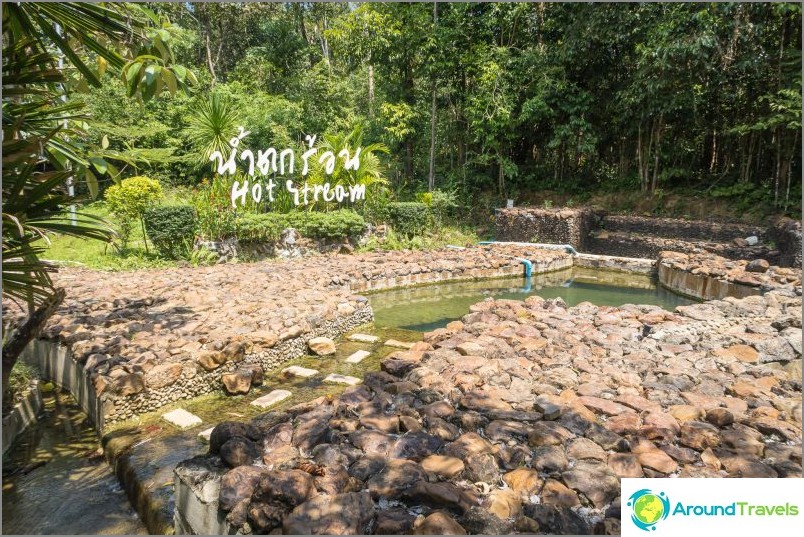 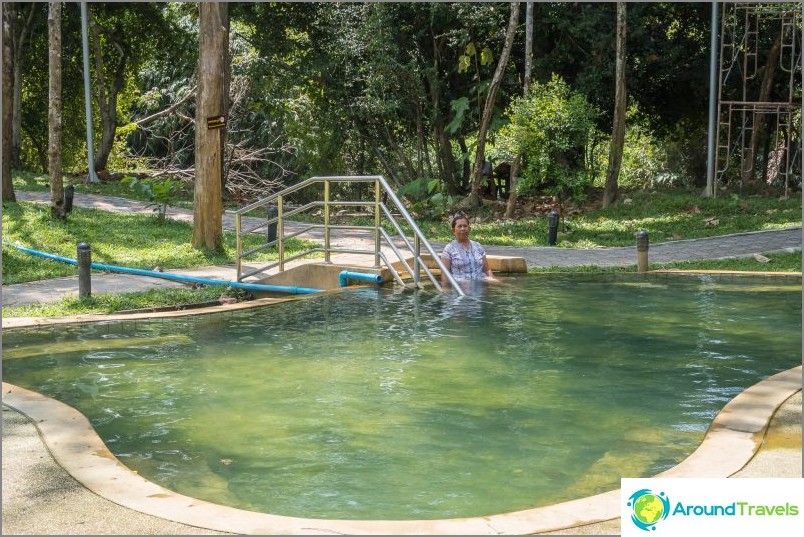 And artificial reservoirs with healing water 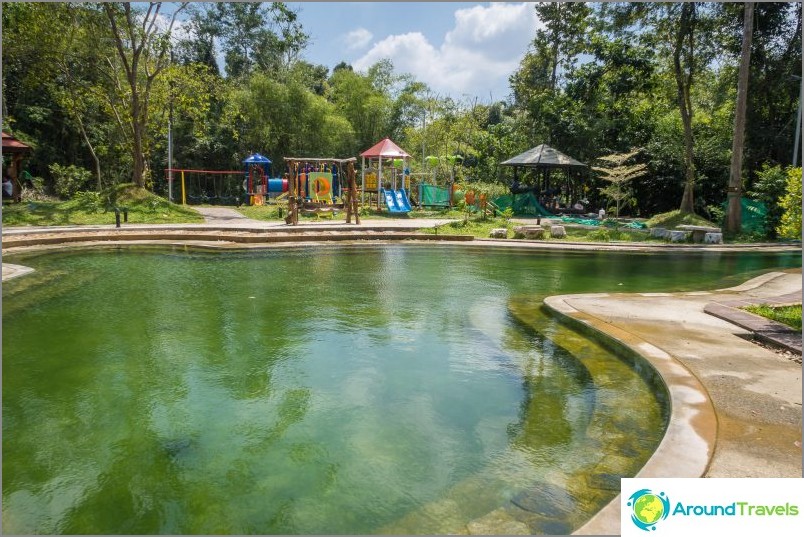 A playground can be seen behind the pool.

I have already been to hot springs more than once and I know what it is, so I did not try the local waters on myself. Despite the fact that the place is tourist, 70 percent of the visitors were local. Perhaps due to the fact that I came on a day off, and besides, there was some kind of Thai holiday. That is, if you mentally remove Thais from the picture, then not so many tourists came to Namtok Ron. I counted something about six people who flashed before my eyes during the entire time I was here.

Namtok Ron is a stream that is formed by several underground hot springs and flows into the Thom River. And it literally flows - from a height of about three meters, the water noisily rolls down the steps-fonts, in which people soak. Quite unusual entertainment and peculiar sensations, because when you go into the water, out of habit, you expect coolness, and you get the effect of a bath. In some fonts, the water is really cool, in others it is just warm, but there are some where you won't be able to sit for a long time - there the keys hit right in the back or in the seat. In the river below, the water is cool, and hot streams also break through from the bottom in places, but it doesn't hurt to step on them. 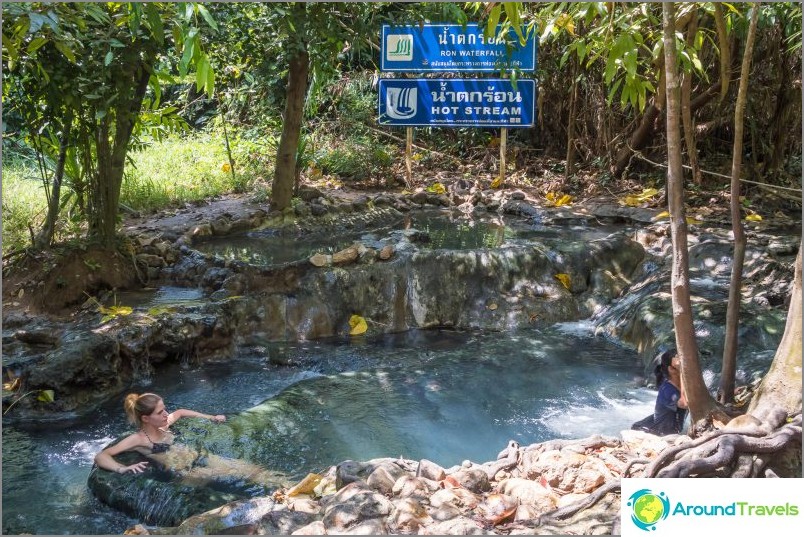 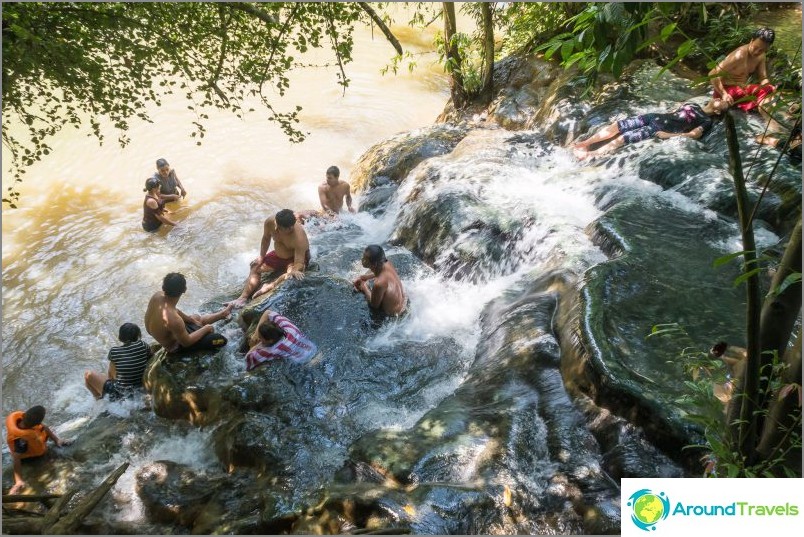 All fonts are located on the coastal slope 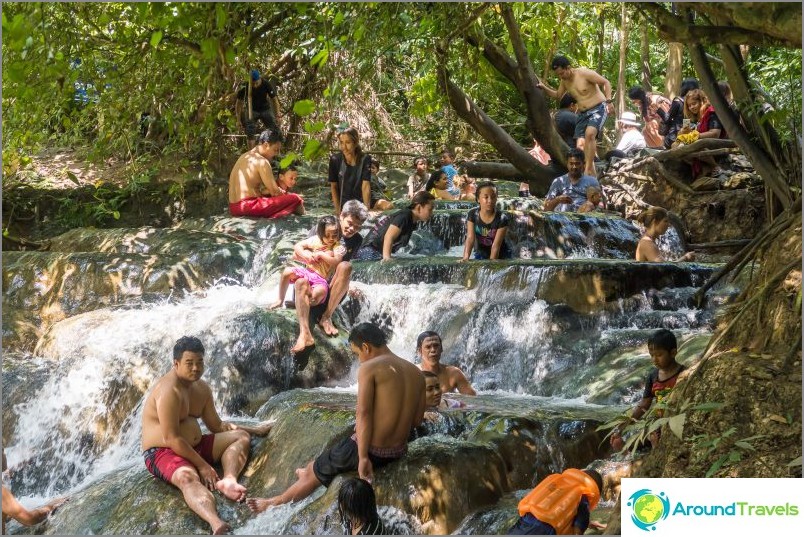 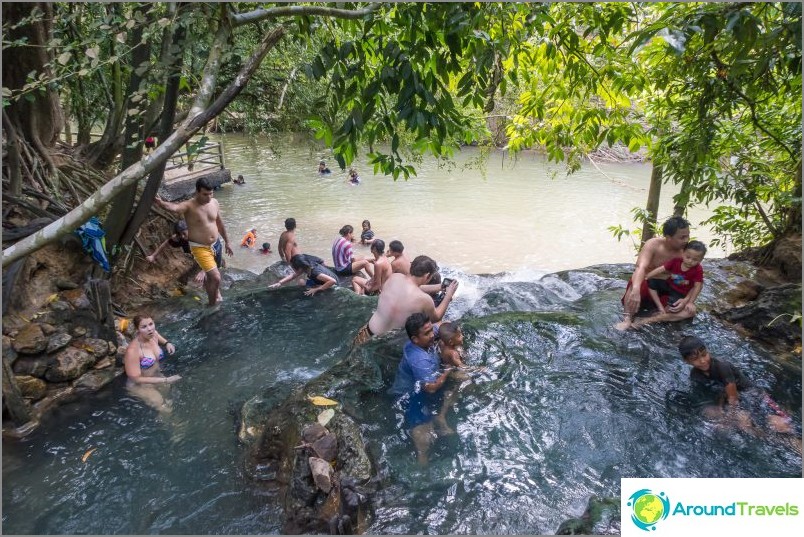 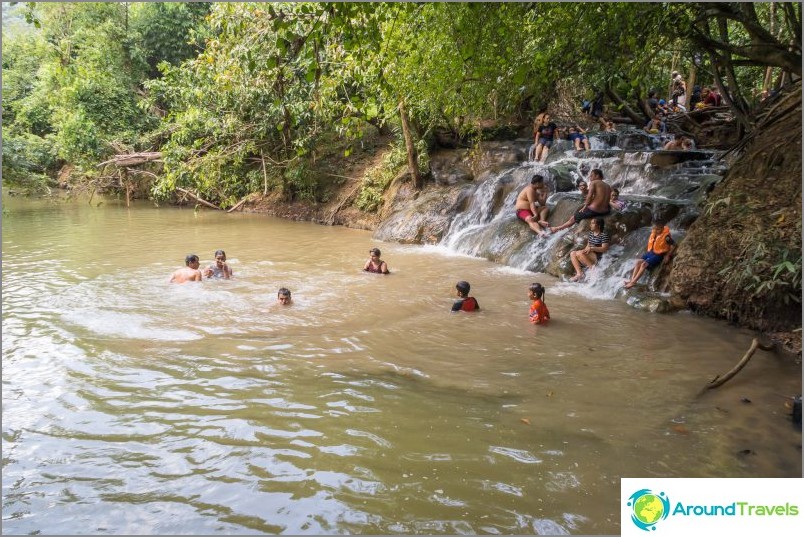 Water flows into the river, from the bottom of which hot streams also break through in places 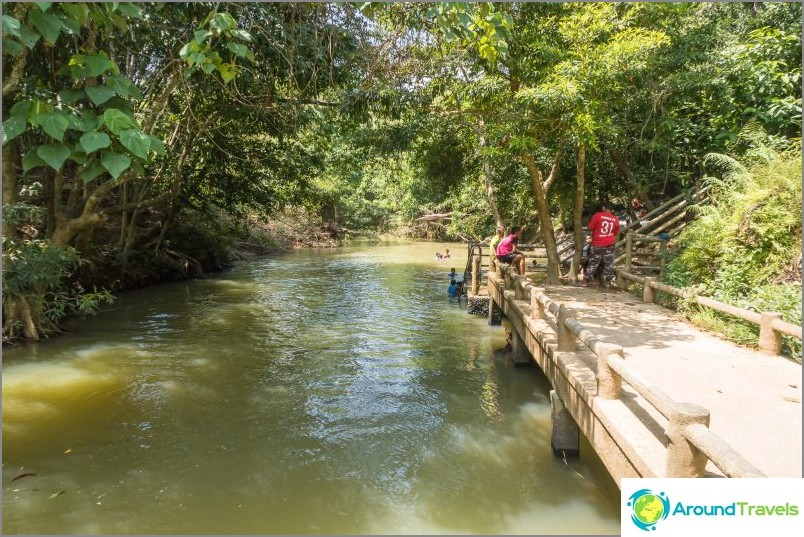 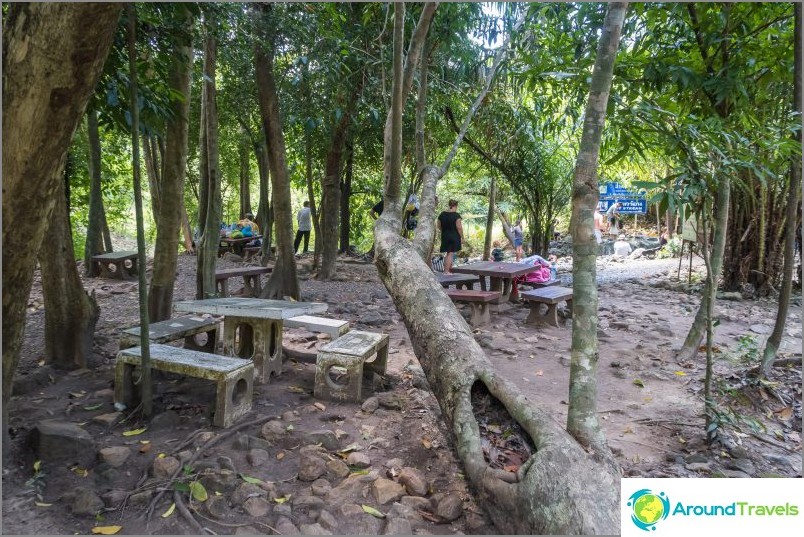 A lot of concrete furniture is placed in the shade near the springs, you can have a snack without leaving the checkout. 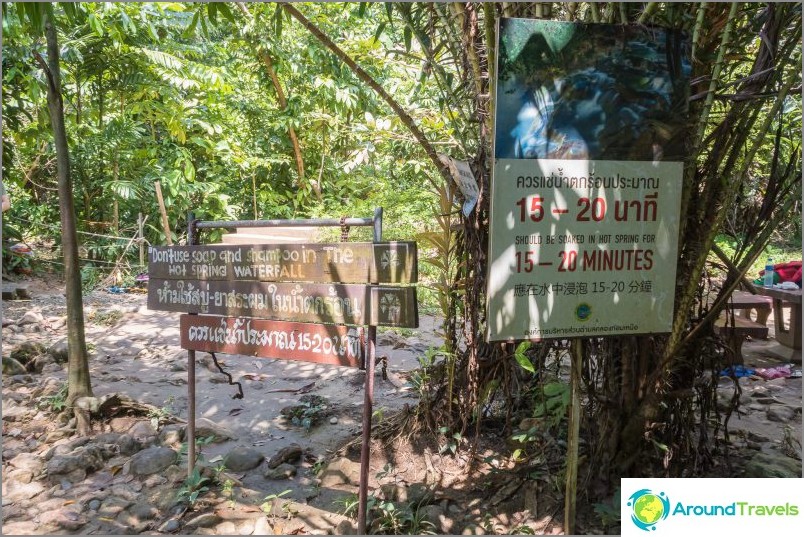 In some places, very threatening vegetation comes across

The cost of entering the Hot Stream Waterfall territory is 160 baht per adult, the price for a child is not separately indicated, most likely free.

Parking price: 40 baht per car and 10 baht per scooter.

There is a Thai massage near the waterfall, 300 baht per hour and 150 for half an hour. From the parking lot at the main gate to the source, people are driven by golf carts, for 20 baht per person, but in principle, it takes only five minutes to walk, and golf carts are an option for the very lazy.

Two roads lead from the gate to the waterfall: a wide asphalt one that turns into a paved path, and the second is a Natural Trail. This path goes through the jungle, along a hot river and through a thicket of bamboo, which is very cool to be thrown in different directions to form a path. Both options are approximately the same in terms of walking time. The length of the Natural Trail is approximately 300 m.

It will take about an hour to visit the entire park if your goal is to look around and take a dip. The infrastructure is not as rich as on the Emerald Lake, did not see cafes at all. But about a couple of minutes drive along the road in the opposite direction there will be a civilian cafe. 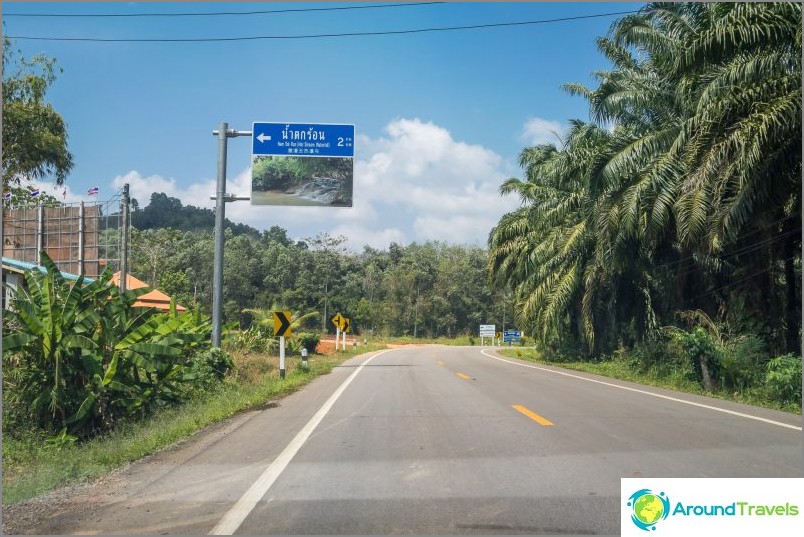 Signpost on the main road 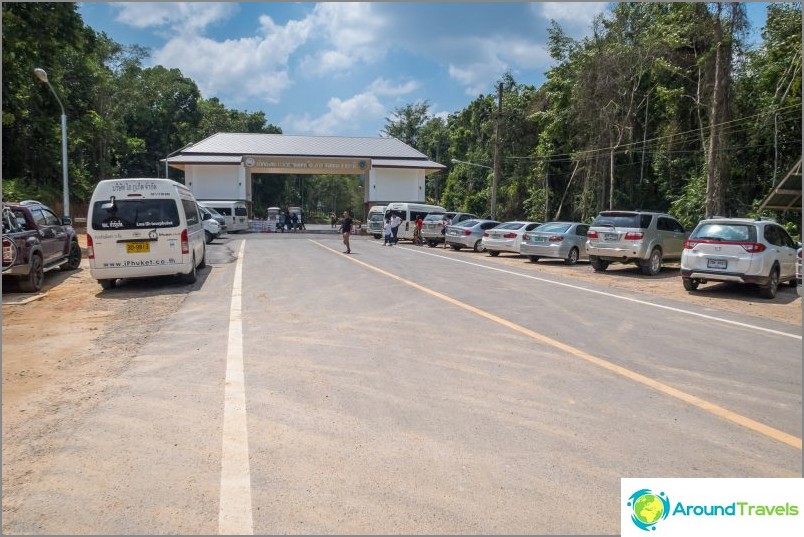 The main gate of the park 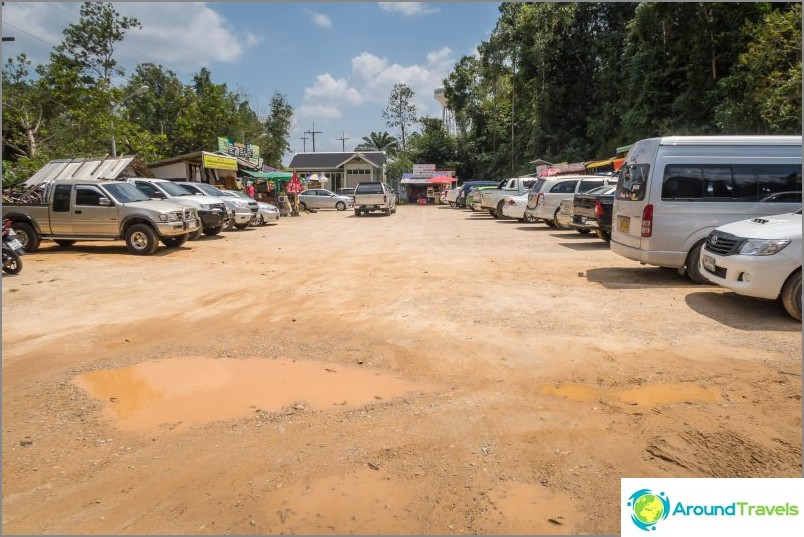 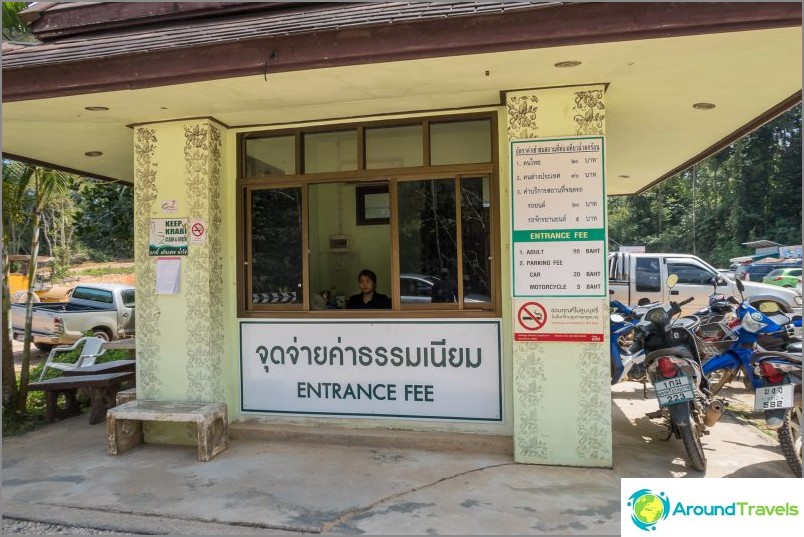 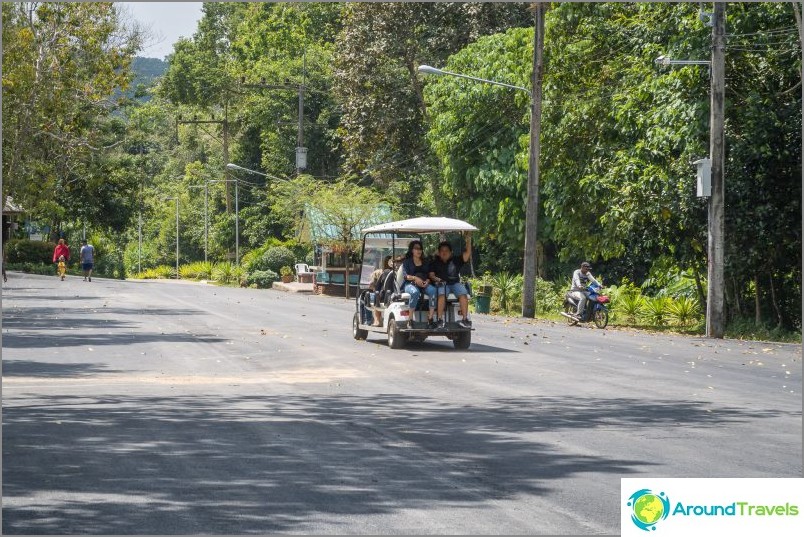 Especially lazy, or those who need it - golf cart services 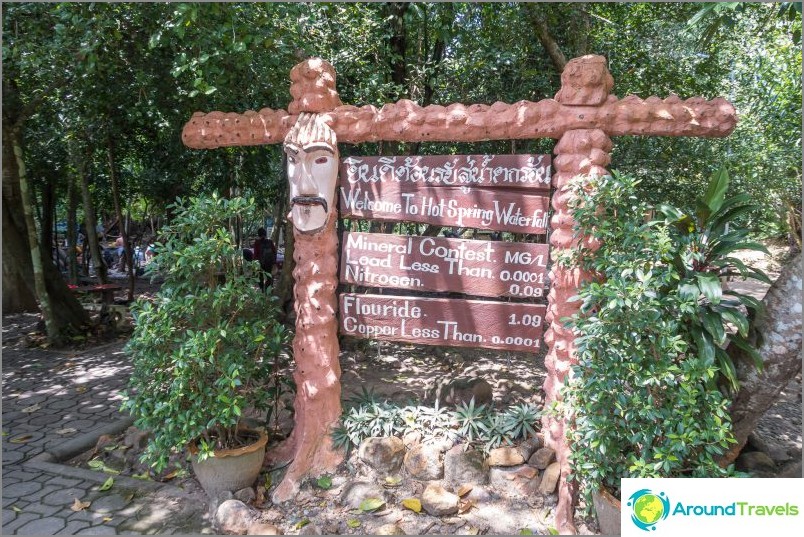 Briefly about the composition of water in springs 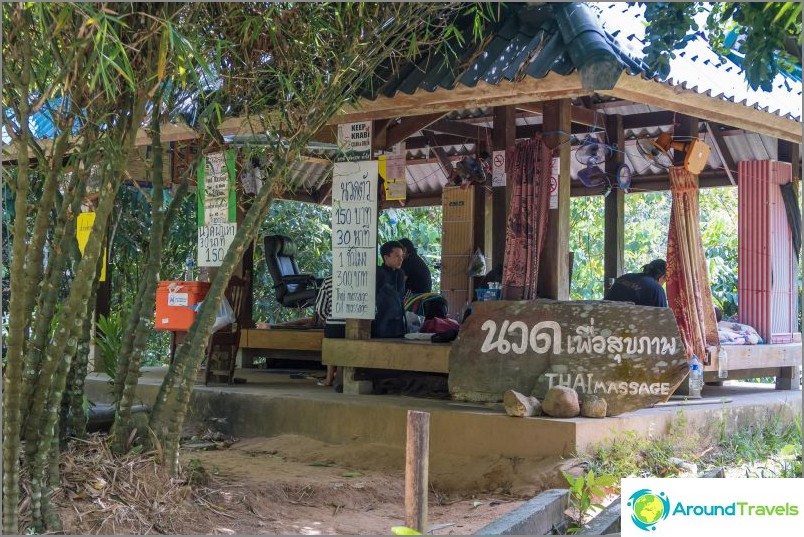 Ron Waterfall Hot Springs & Hot Waterfall
Natural baths in the rainforest, filled with running hot water, cascade and end with a waterfall. The water in the springs is considered curative, its temperature is just over 40 C.
More about sources. 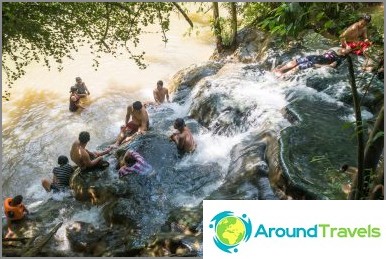 Natural baths in the rainforest, filled with running hot water, cascade and end with a waterfall. The water in the springs is considered curative, its temperature is just over 40 C. More about the springs.