Home › New articles › Shopping in Bangkok was a success! Ikea and Mega

Shopping in Bangkok was a success! Ikea and Mega

I was once asked if there is Ikea in Thailand? I thought about it, but there was no such information in my head. I had to google, as a result I found out that it opened in 2012 in Bangkok. I will not say that I am a direct fan of this Swedish company, but I really like furniture and some things from there, they are inexpensive and comfortable. We have a lot of small things from Ikea in our apartment in Moscow. The only negative is that it is better not to go there with your wife, because so much is needed at once. And supposedly everything is cheap, only 100-200 rubles, but in the end a decent amount comes out. Marketers calculated everything correctly. So it's better to go there only with harsh masculine logic, otherwise you will have to leave with large packages ...

Basically, to get an idea of ​​the goods in Thai Ikea, you can just go to its official website. But I wanted to see in person, as well as buy a toy for Yegor and a knife sharpener (it is light and convenient), so I went there.. 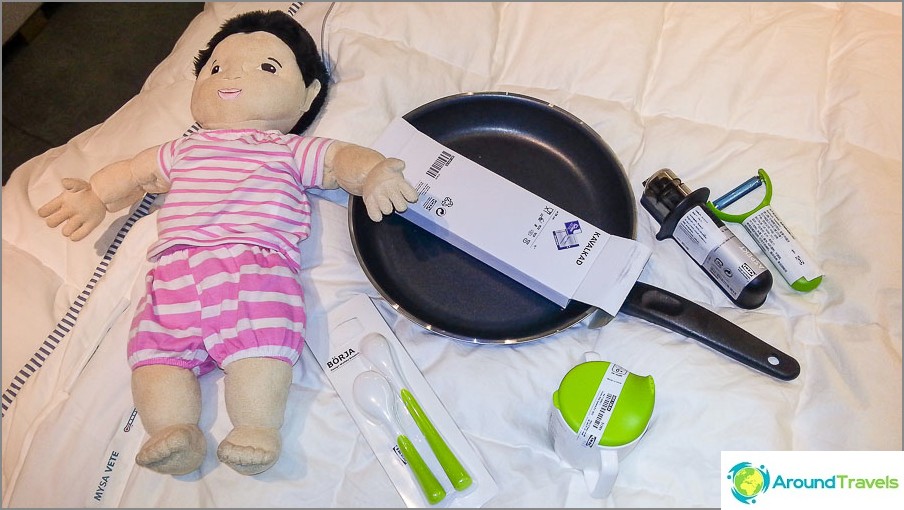 The results of my humble shopping in Bangkok 🙂

Ikea inside the BKK is almost the same as in Moscow: two floors, similar showrooms, even the location of the departments and their sequence do not differ. Everything is like we have at Teply Stan. It may well be that the assortment slightly differs, but if this is so, then insignificantly, because, here and there, I met this or that thing that was once bought by me in Russian Ikea, but nothing radically different had seen. 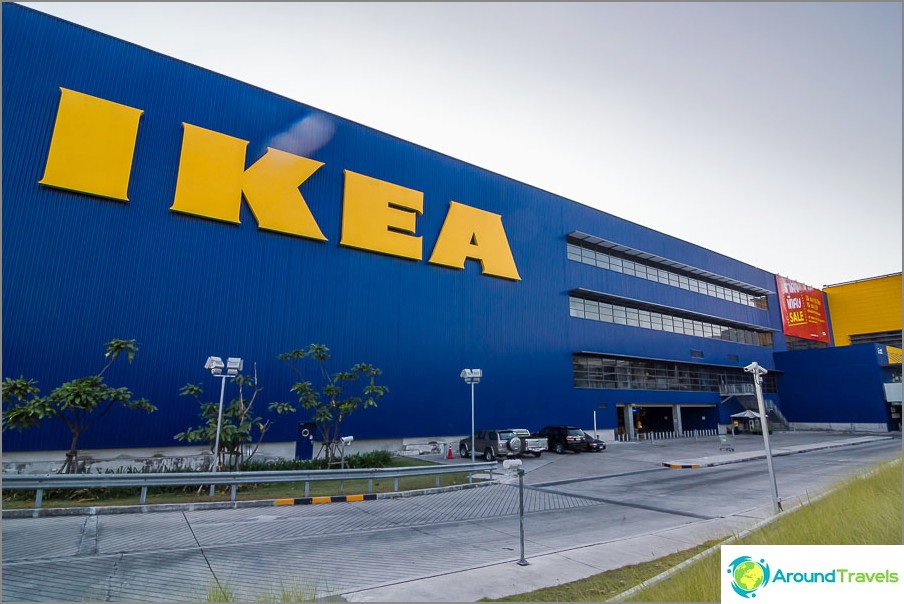 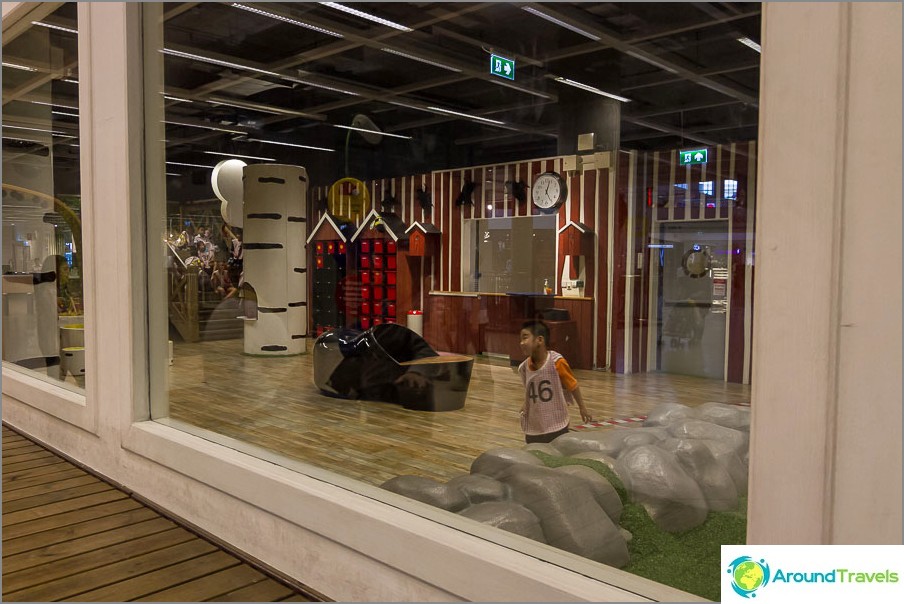 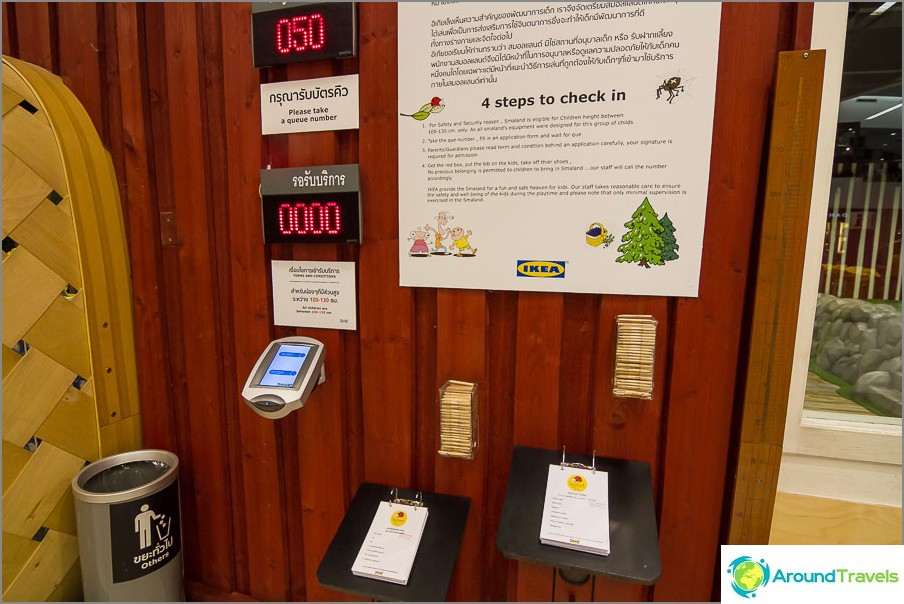 Playground only for children 100-130 cm and according to coupons 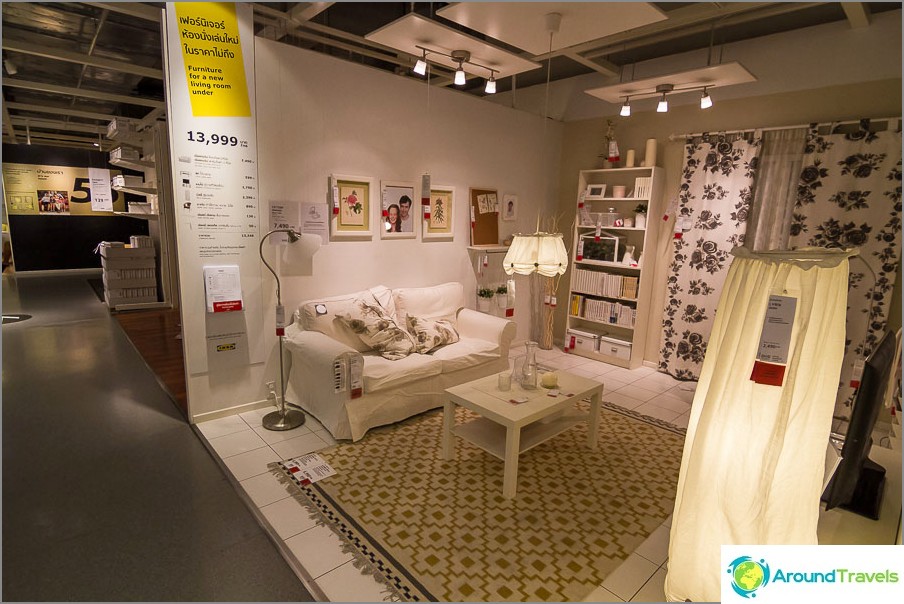 Regular showroom on the first floor of Ikea 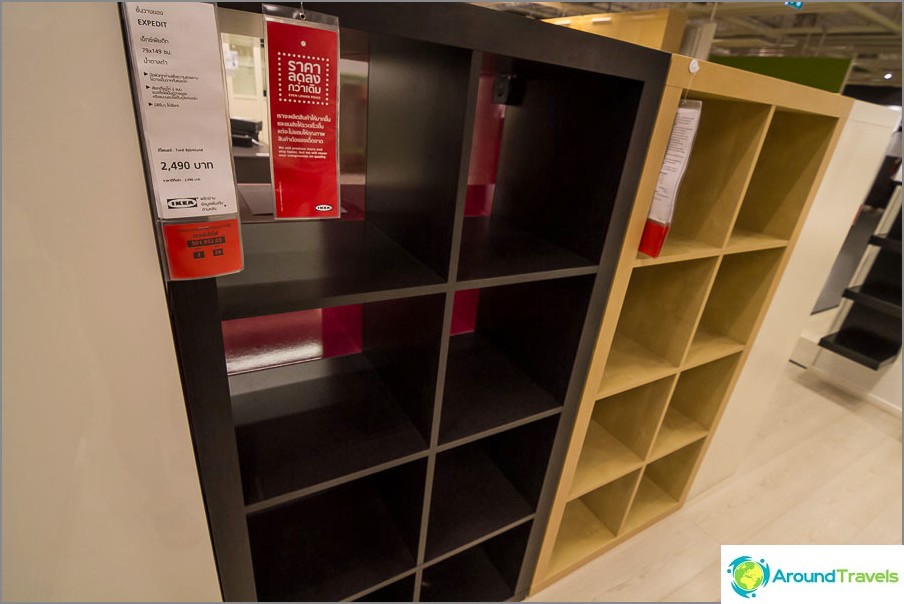 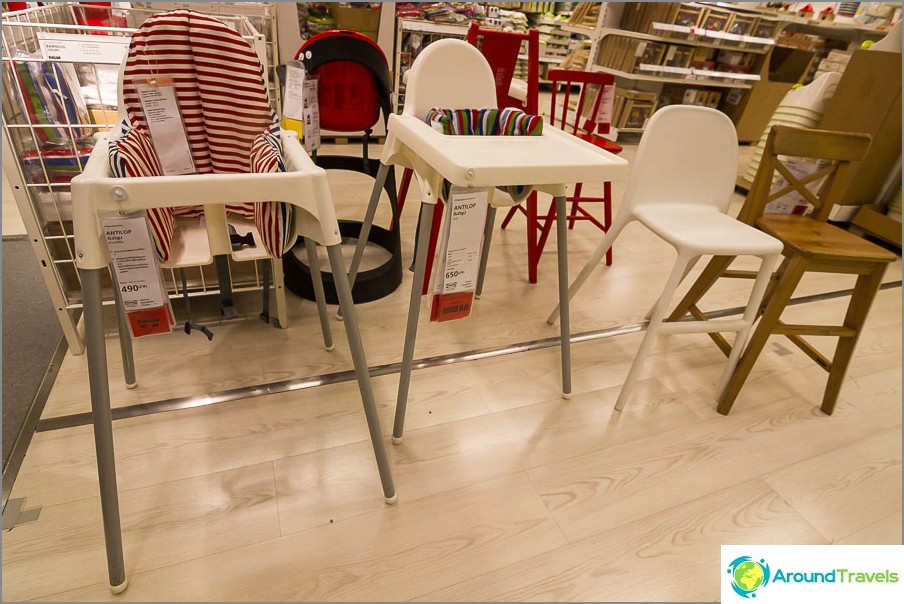 Cheap baby chairs that we missed so much on Koh Samui 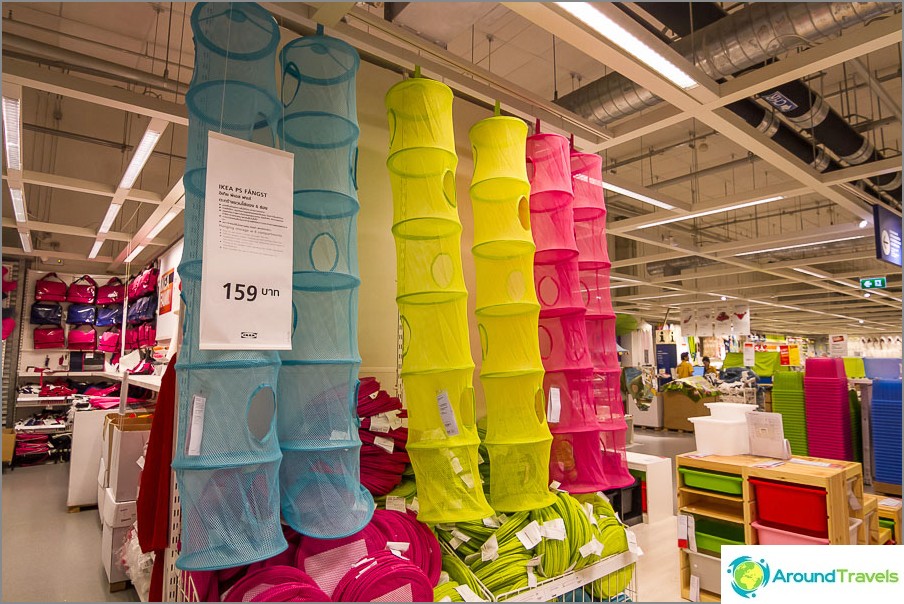 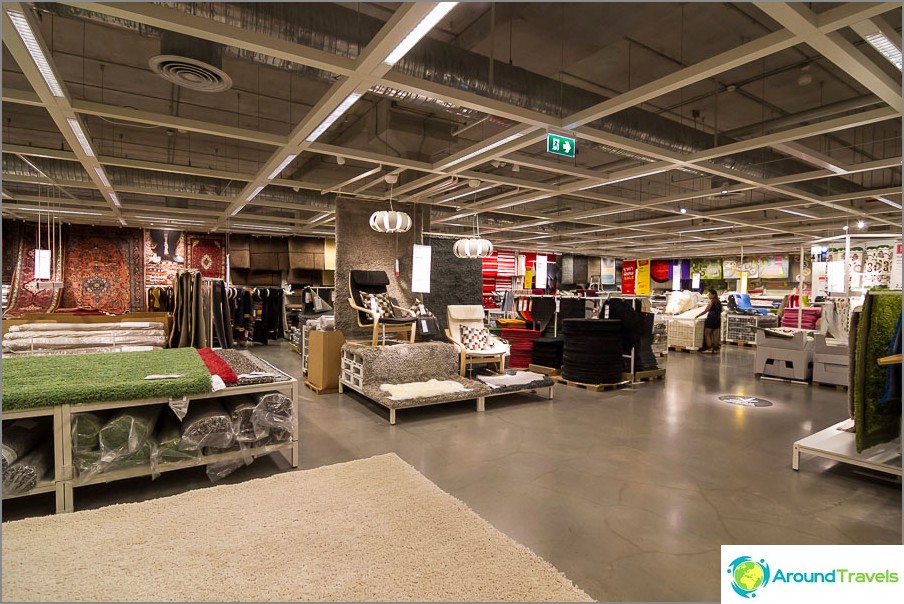 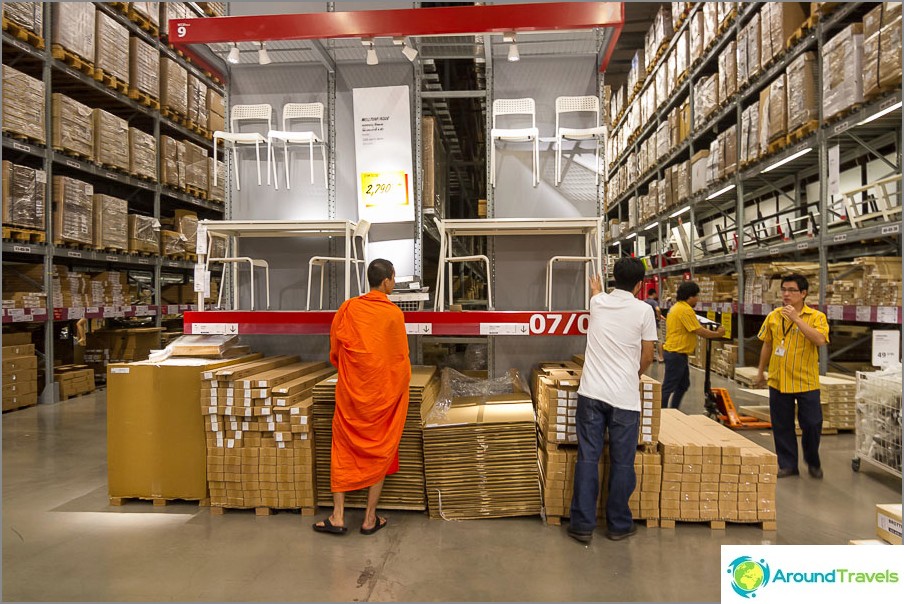 And shopping is no stranger to monks 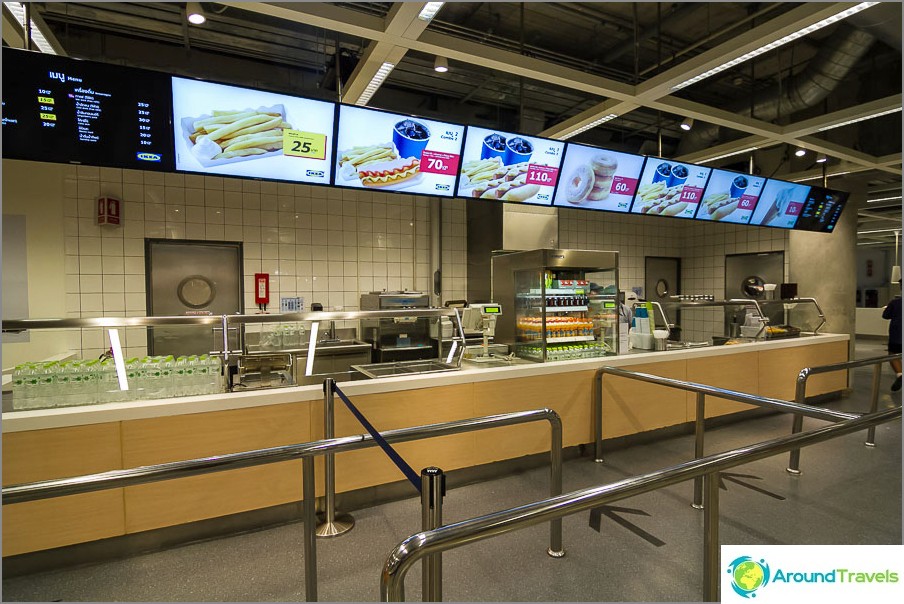 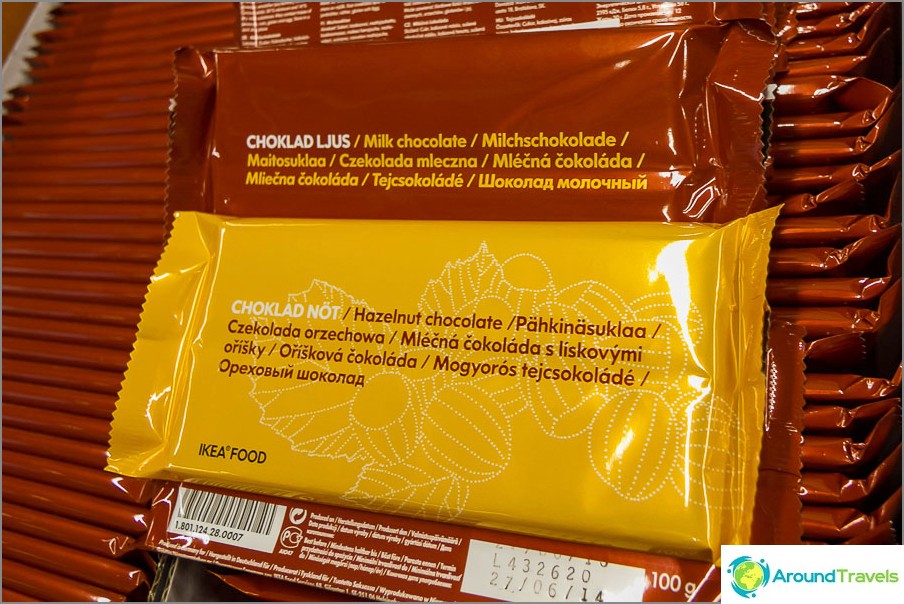 I walked around Ikea and did not leave the strange feeling that I was at home in Moscow. And only when I paid attention to the faces, I realized that after all, I was in Asia, and not in Russia 🙂 And it was also interesting to see what kind of food would be sold in an Ikeevsky restaurant, typhoid or European. 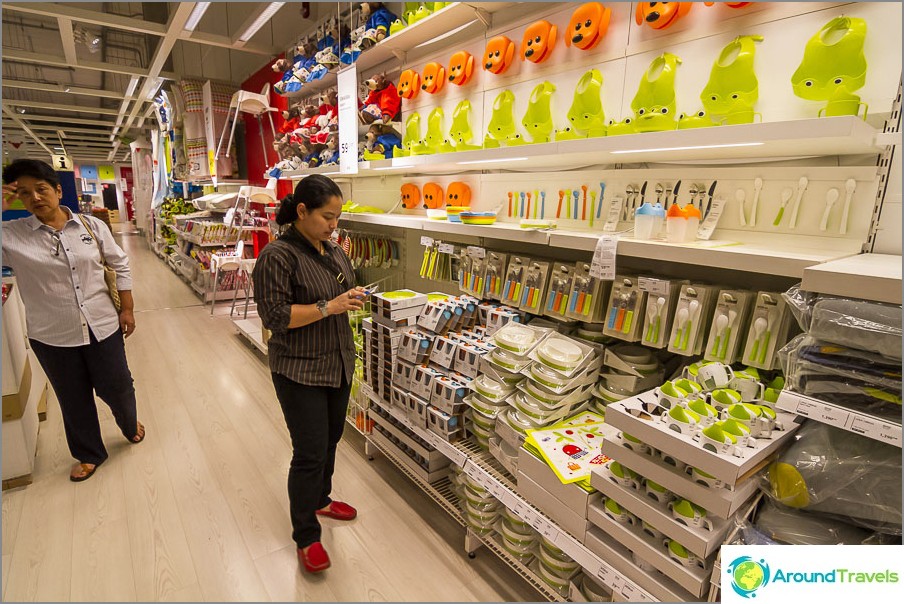 Everything is the same, only Asian faces 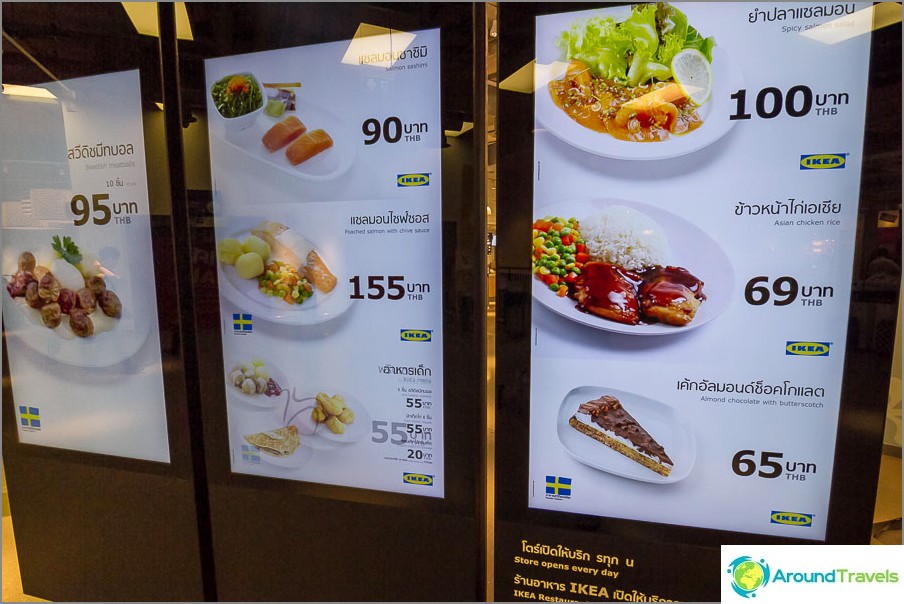 On the Internet they write that a number of scandals and incidents were associated with Thai Ikea. Either their name of some thing was consonant with Thai rudeness, then they released advertising videos that the ladyboys did not like very much ...

Mega is located next to Ikea (the buildings are interconnected), so shoppers can come here in the morning to spend the whole day here. The shopping center is quite large: there are shops with all sorts of well-known brands, all Thai banks, a cinema, Tops Market, a food court with a good choice, and so on. But most of all I liked the fact that there are many playgrounds here, they met me with some frequency. 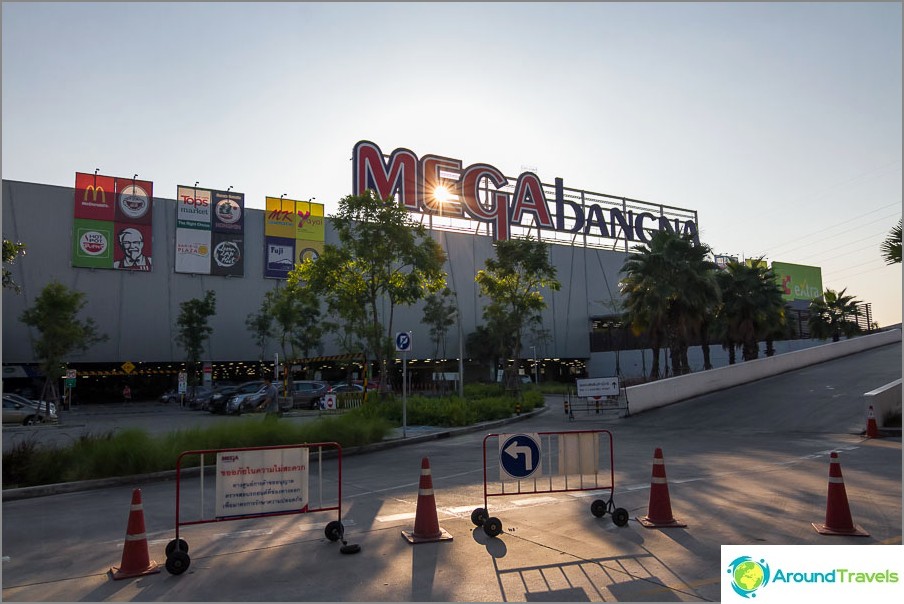 Mega in Bangkok (the letters are written very differently) 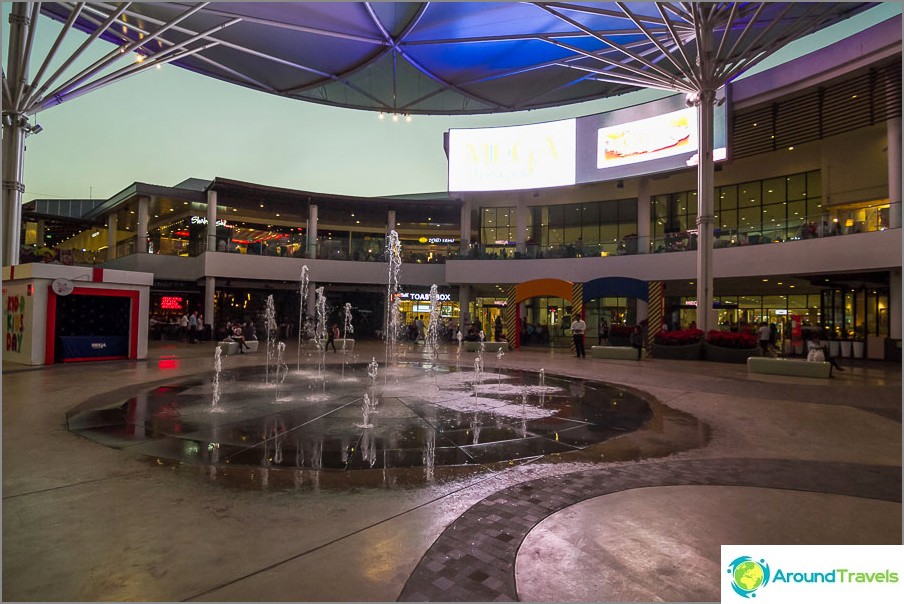 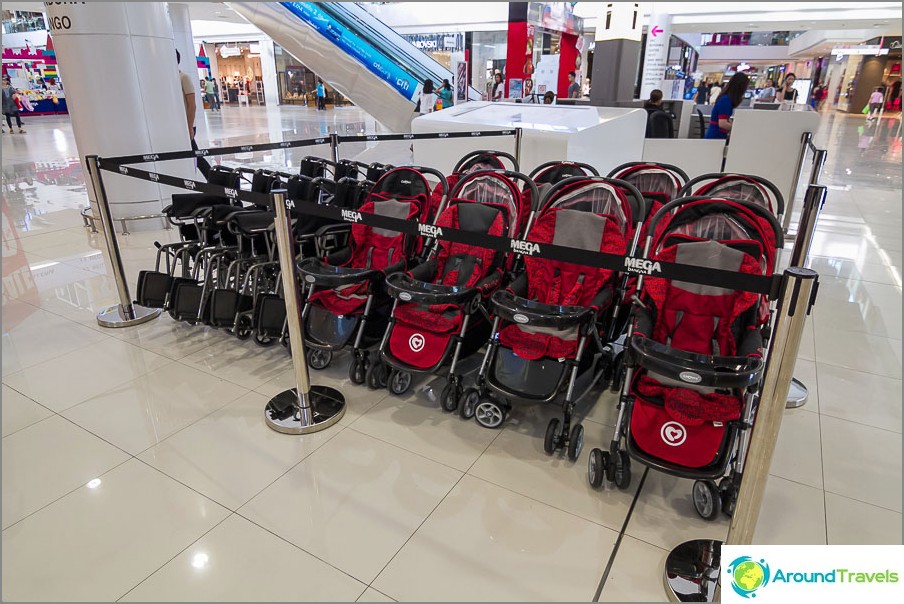 Strollers for children and disabled people for hire 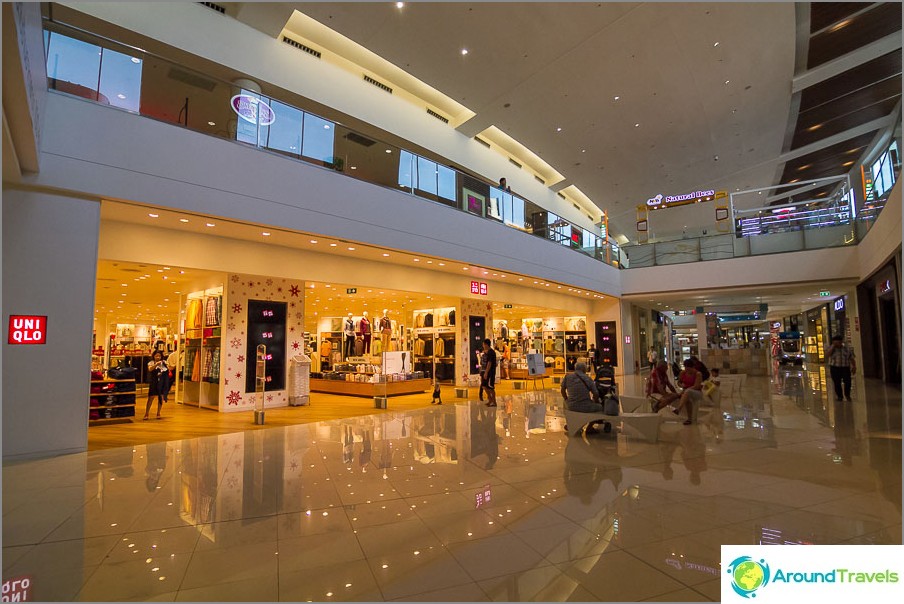 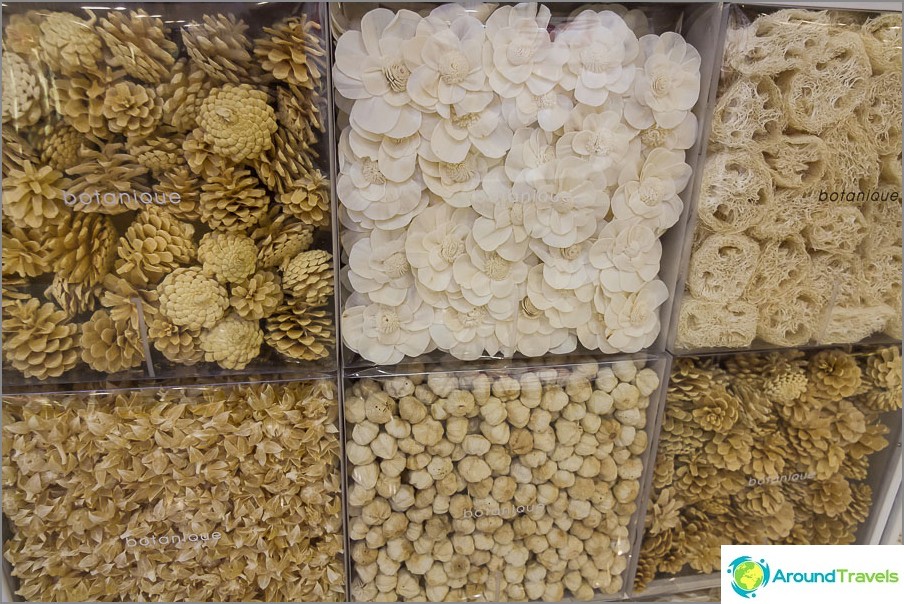 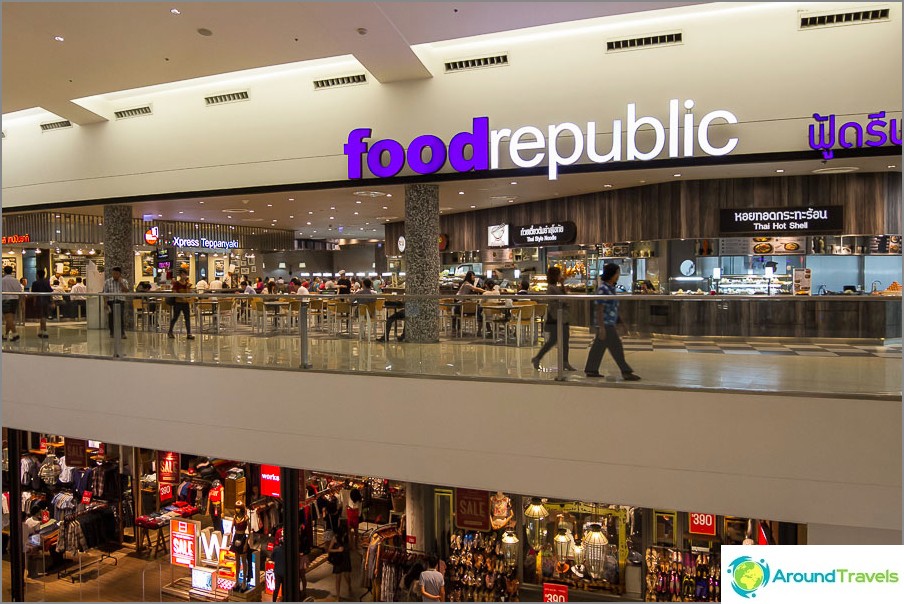 What a shopping mall without a food court 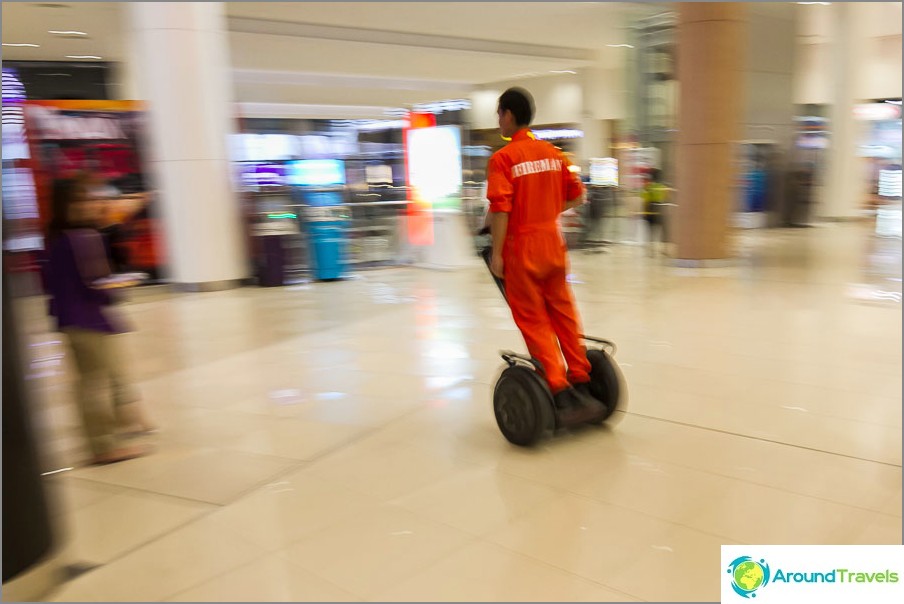 Employees and guards move on segways 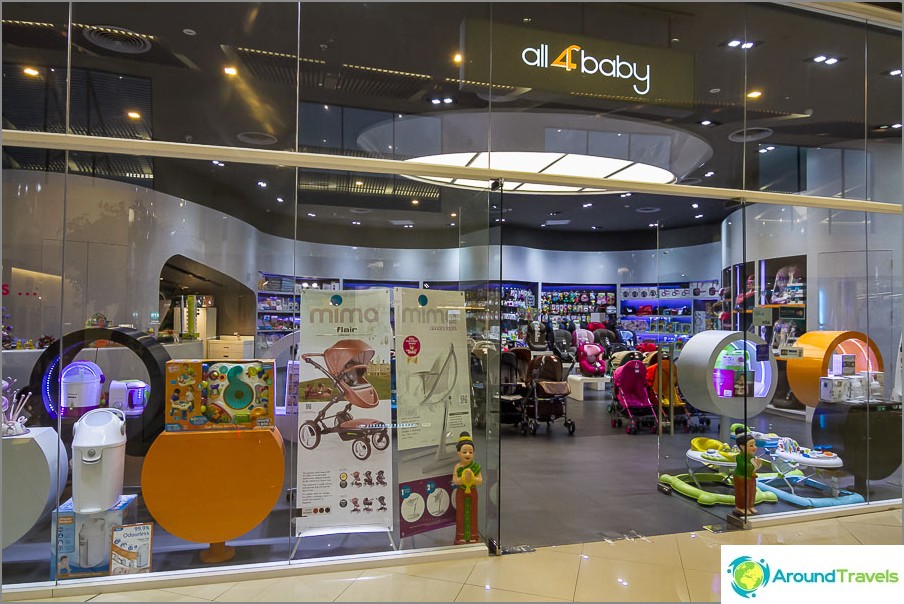 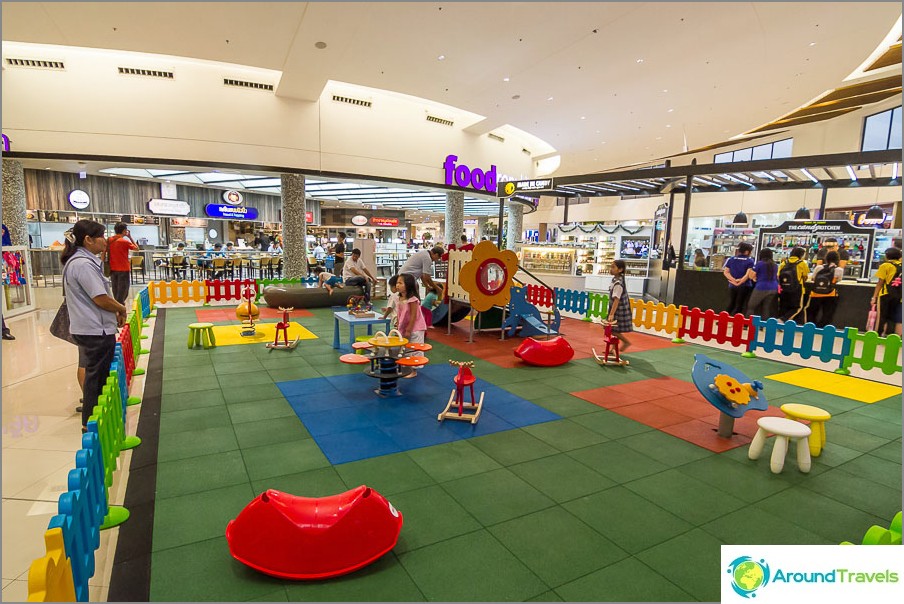 Playgrounds in Mega are scattered around the perimeter

Where is Ikea-Mega and how to get there

The location of Ikea is not very convenient, it is not so easy to get to it. More precisely, it may not be difficult to get there, only for a long time if you do not live in the same area (southeast of Bangkok). There is no subway next to it, so initially you need to get to the BTS Bang Na or Airport link Hua Mak stations, which are the closest to go. And then by bus, or by Taxi, who is more comfortable.

I went there by bus and back by taxi. I got out at the Hua Mak station, followed the navigator (500m) to the bus stop, asked Google Maps which bus (133, 537, 207) to take me and drove off. So 207 did not reach Ikea, I had to change trains, but this is not critical, it is difficult to get confused there and there are a lot of different buses.

I took a taxi back to the condominium and it was a mistake. Rush hour and an hour and a half in traffic jams. And I never made it to the apartment, I asked in the end to take that metro. So it's better not to drive during rush hour, get back via BTS or Airport Link.

Finally, I want to say a few words about housing in Bangkok, suddenly someone will come in handy. I have stayed in Bangkok many times and in different hotels. I will not provide links to all my reviews, I will give only a few. Nasa vegas - convenient for stopping near the airport and metro, Rajata - good place to spend the night near Khaosan, S3 Residense located in the center next to the park.

If you want to find a hotel in Bangkok in advance, it is convenient to choose on RoomGuru, it is a service where you can compare hotel prices in different booking systems.