Surin Beach - located on the west coast of Phuket, south of the beach Bang Tao. Strictly speaking, Surin is bordered in the north not by Bang Tao, but by a small «private» the beach Pansea Beach, from which it is separated by a cape. Private beaches are prohibited in Thailand by law, but sometimes they are limited by natural barriers from the rest of the coastline, as well as the private territory of the hotel adjacent to them.

In the south, Surin also rests on a small promontory with stones in the water, behind it is a small beach Laem Sing Beach with boulders in the water, to which you have to go down the steps from the mountain, and further in the south there is a large Kamala beach.

Surin is less than a kilometer long, with impressive stones in the water at the edges. Wide, but in the season densely packed with sun loungers under umbrellas, up to five rows, they do not add space to the beach. The ebb and flow are not as pronounced as in neighboring Bang Tao, the water does not go away for tens of meters.

The sand is fine, light, yellow or almost white, depending on the lighting. No silt, the water is clear, the color is very beautiful, azure. Combined with white umbrellas and their fluttering ruffles in the wind, it creates a festive atmosphere.

During the season, cleaners with brooms leave the beach all the time, there are trash baskets. Neat and clean.

The beach is crowded during the season. Unlike the spacious and relaxed Bang Tao, this is more of a party place. There are many young and not so Europeans drinking beer on sun loungers. Families with children do not make up the majority, but there are also Russians, including Russians. On New Year's Eve, the Russian community organizes holidays for children here..

The northern edge of the beach is more spacious and less crowded, fenced off by a high shore with palm trees. Out of season there are fewer sun beds and fewer tourists, many cafes are closed, excess infrastructure is being cleaned.

Tourists love this beach and find it more attractive than, for example, Bang Tao, which seems a little rustic against the backdrop of glamorous Surin. There are bars and cafes on a small high promenade, planted with trees..

In the evenings, on the high bank, people meet the sunset, then numerous lights of restaurants and other tourist establishments are lit, music is played. The atmosphere of the resort in a good sense of the word, without excessive greediness.

The coast is quite high, especially at low tide. That is, it becomes deep almost immediately, sharply. At low tide, the entry is more gentle. The wave is strong, even when small in appearance. Out of season, very powerful waves. They start in April. At the cape, in a storm, the waves crash impressively against the stones, flying up into the sky in millions of splashes..

During the season, the sea is very gentle and beautiful, although complete calm is rare, usually there is surf with white foam. Since it immediately becomes deep, the waves sway, do not break on the shore until the last.

During the season, floats are pulled in the water, dividing the beach into swimming areas, and a pontoon bridge is being built for walking. Lots of scooters. If you feel like rocks, you can go to the edge of the beach. For children, if they know how to swim or swim with their parents, it is good there, tk. clean and clear water. But there is not much room for running..

There is an embankment right behind the beach, steps lead to it in several places. Trees grow on the embankment, and open cafes are located under them. But there is not much shade on the beach itself. It is necessary to choose places where the crowns are spread out. The sun comes before noon anyway. There is no place to lie down for free and in the shade, everything is occupied by paid sun loungers.

There is a free shared shower in the center of the beach, near the parking lot and the temple. Sun loungers cost 100 baht, the first line is 150 baht. On the very last row, the trees growing on the embankment also make shade, it is cooler there. Since the beach is closed by a high coast, it is very hot to be there most of the time, like in a steam room, since it is poorly blown by the wind. 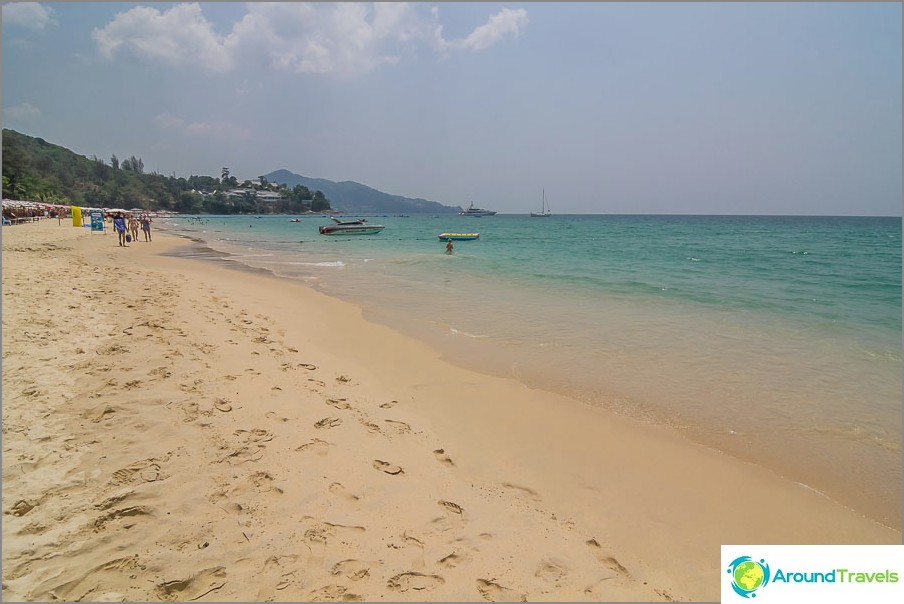 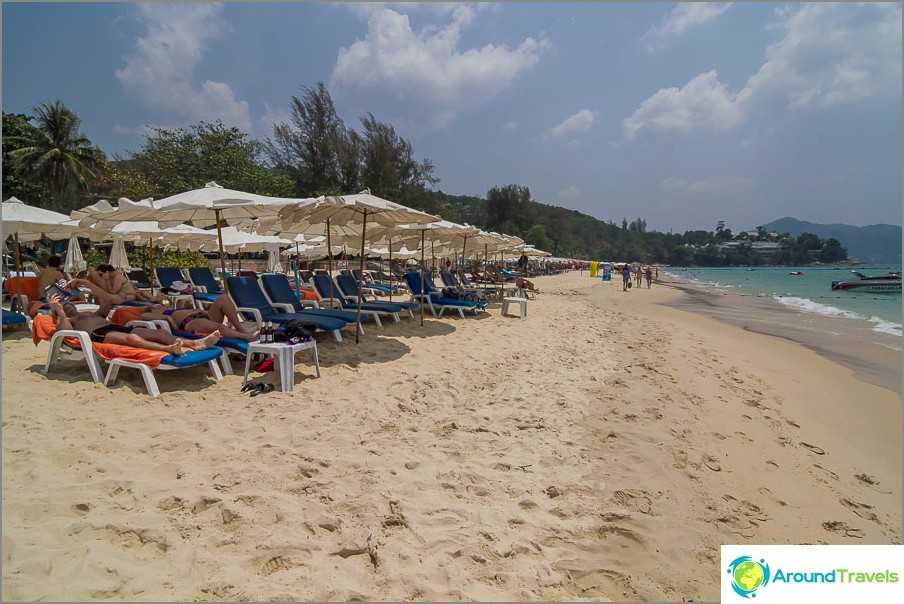 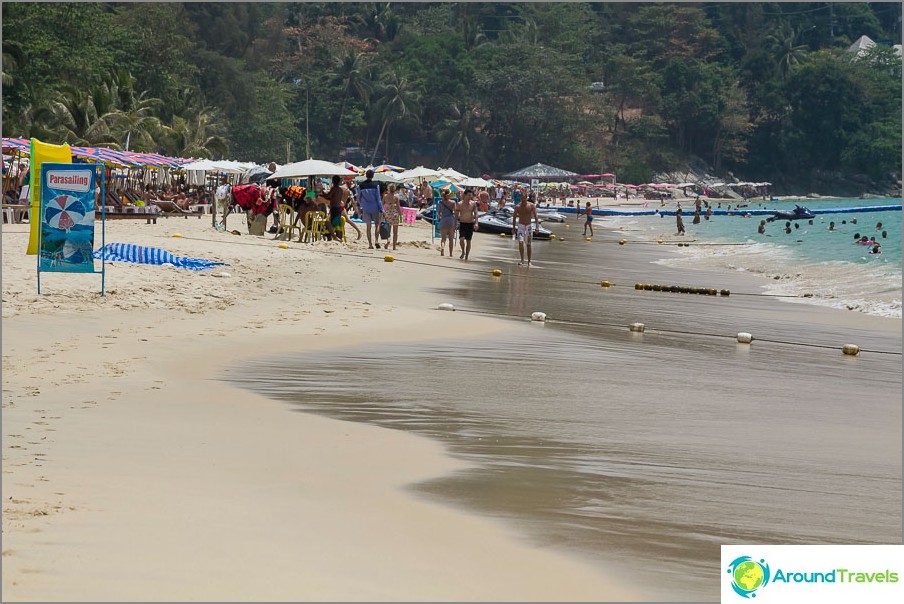 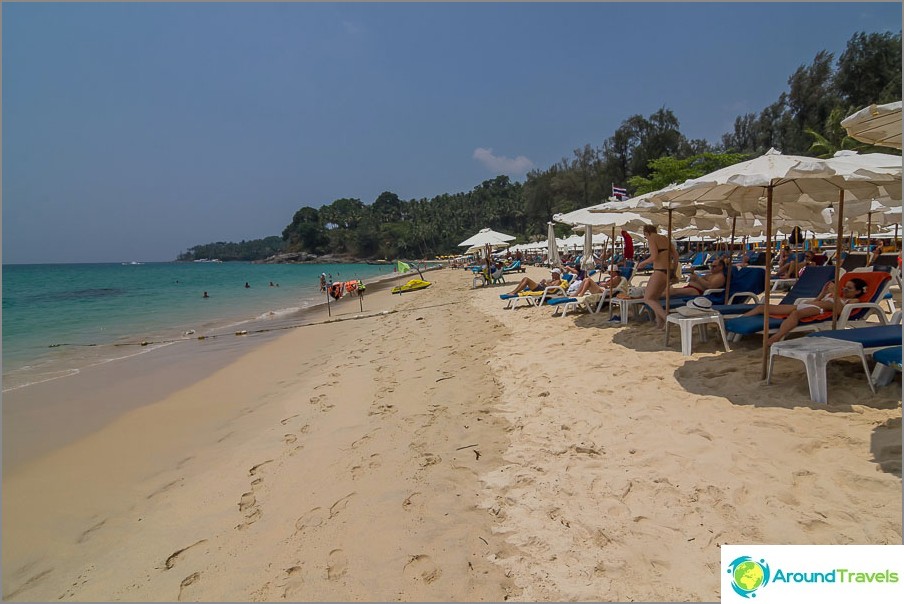 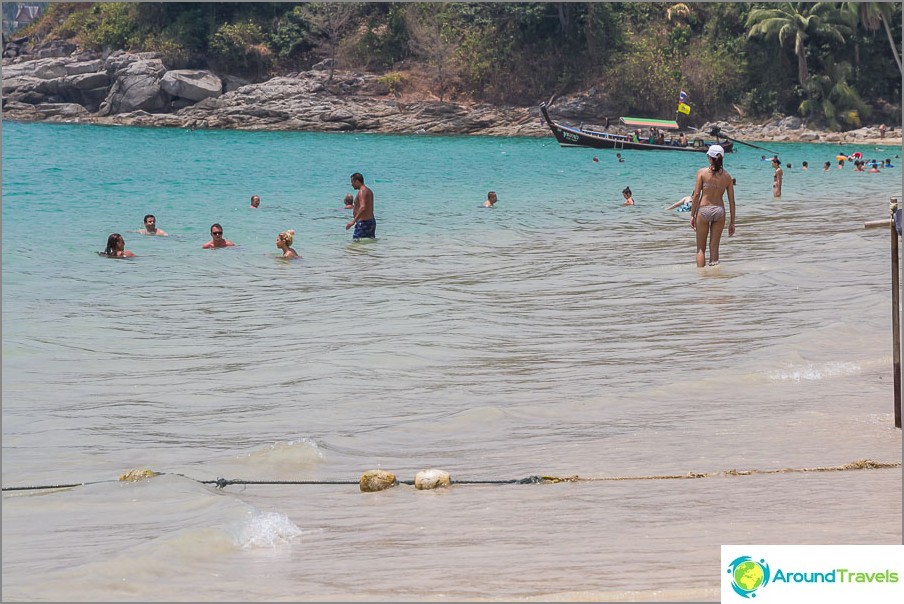 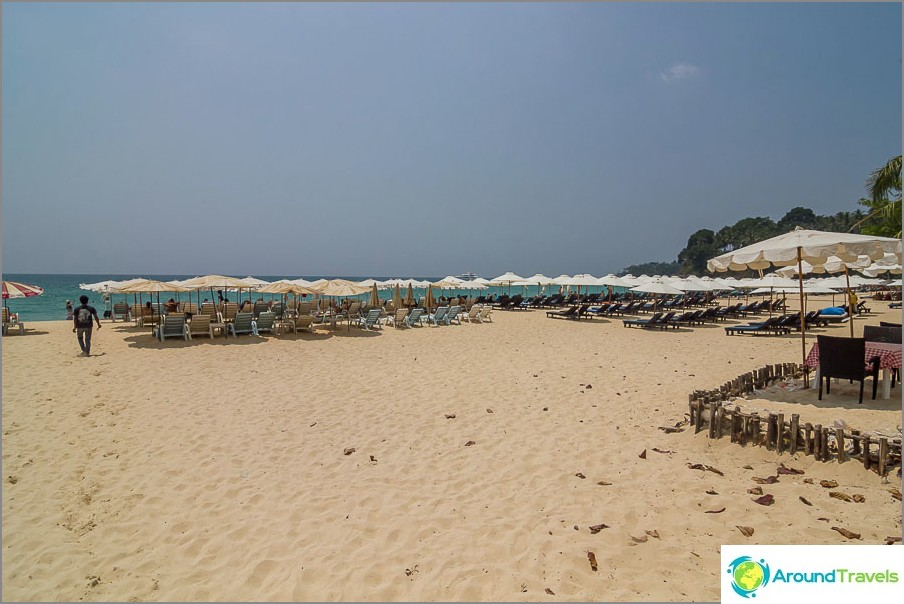 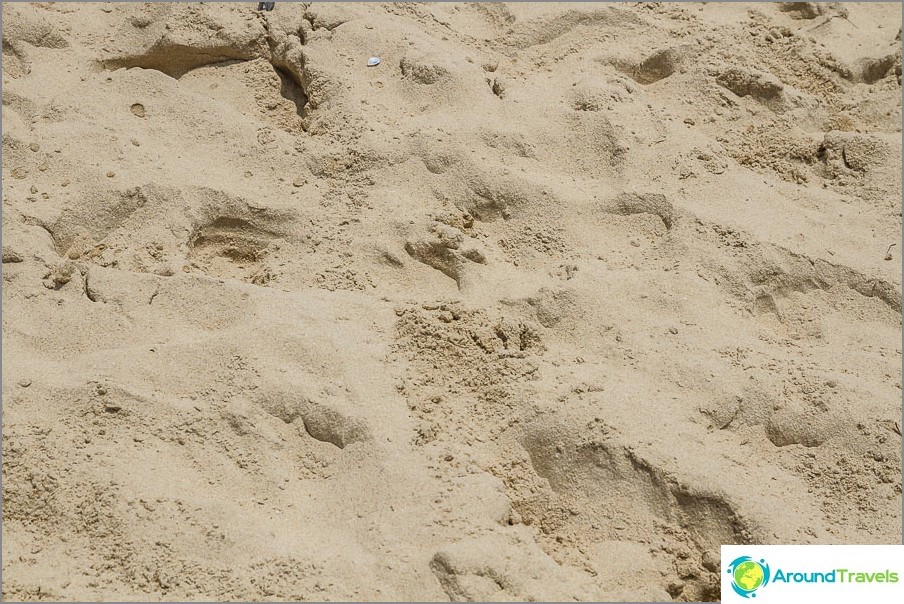 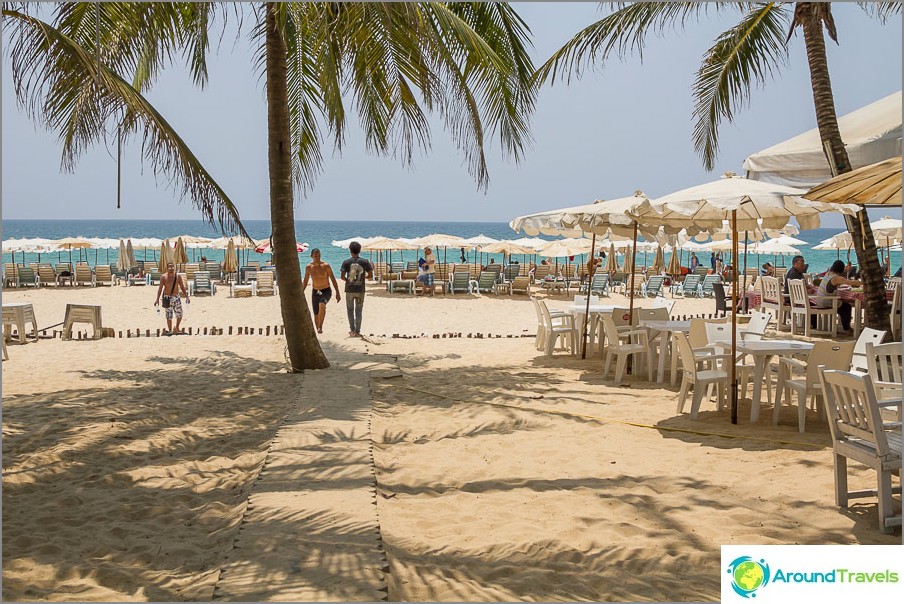 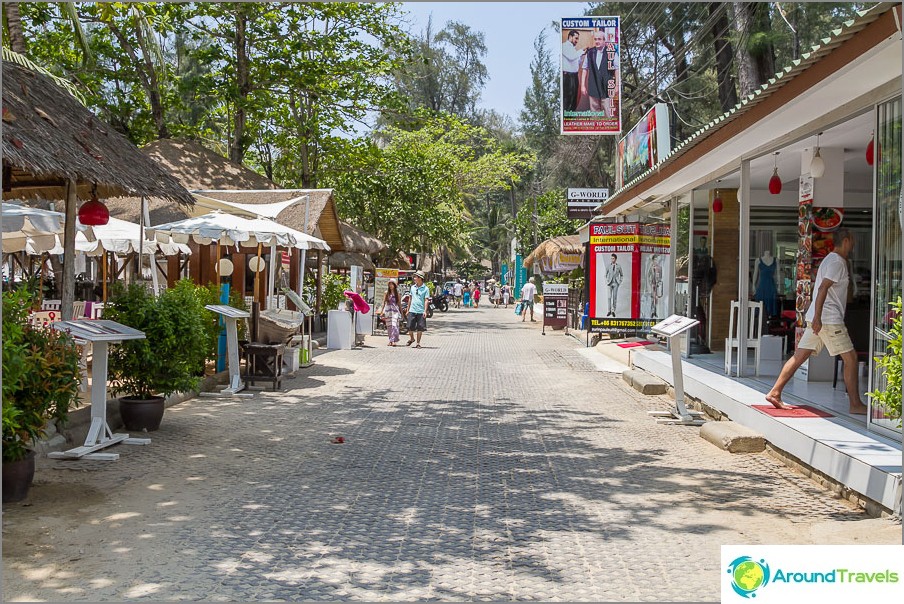 Many outdoor cafes and bars under the trees overlooking the sea. Plenty of nightlife. On the north side there are expensive establishments. Around the center of the beach is a Thai temple. Further beyond the embankment is a large empty space, in the north there is something like a park opposite the Hilton, there is an unassuming playground.

In the center of the field is a large tree decorated with lanterns. A large stadium is being built next to the temple.

There is not so much housing on Surin. There are several expensive hotels: Novotel Phuket Surin Beach Resort, Chava Resort and Twinpalms, for example. The more democratic ones are Surin Sweet Hotel and Benyada Lodge. In the very north of Surin is the luxurious five-star The Surin Phuket, and at the southern end of the beach is Ayara Hilltops Boutique Resort & Spa .

There are expensive condos - 30-40 thousand for a one-bedroom apartment. There is also accommodation behind the high road and at the junction with Bang Tao, but you have to walk to the beach for 10 minutes or more. Even the Hilton is not the first line and you will have to cross a small road. There is no housing right on the beach, in principle, only an embankment with a cafe, behind which along the entire length of the beach there is a large unbuilt space, something like a park.

There is a centralized parking in the middle of the beach, not far from the temple. On the embankment there is a narrow road between two rows of cafes and shops, you can drive, you can also park your bike.

In the north, the road through the village and the hotels goes to Bang Tao. A busier and larger road leaves the coast and leads to McDonald's and Big Tesco, located near the same Bang Tao. Walk from Surin to McDonald's and Tesco for 40 minutes, through an endless string of local shops, quite civilized European restaurants and bakeries, a local market and mosques. In the other direction, the road rises uphill and goes to Kamala.

Songthaew from Phuket Town can be reached in 40 minutes and 40 baht. From Kamala, too, to the songteo, about 10 minutes from the road where the songteos go to the water itself - about five minutes on foot. From other beaches - with a transfer in Phuket Town. From the airport by taxi in 30-40 minutes, 1000 baht. 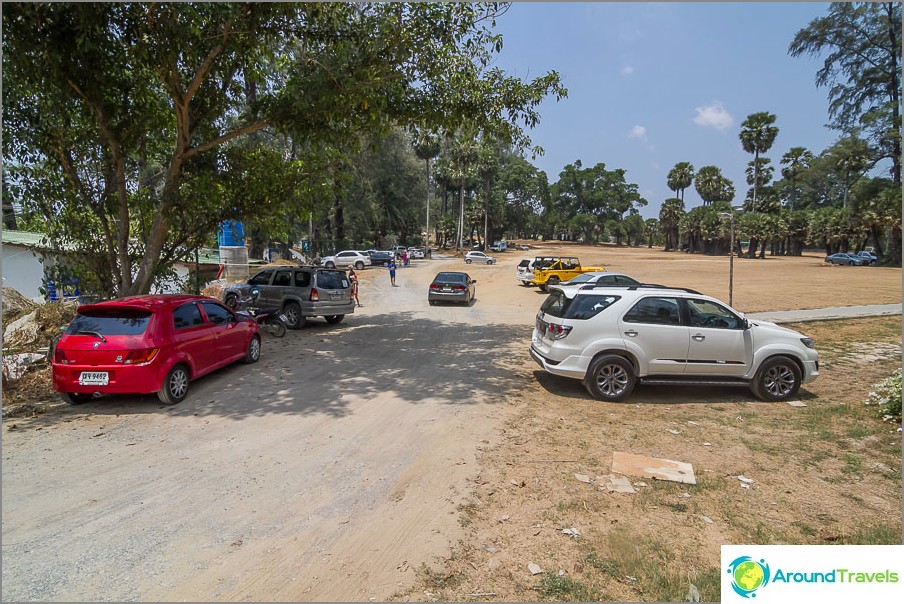 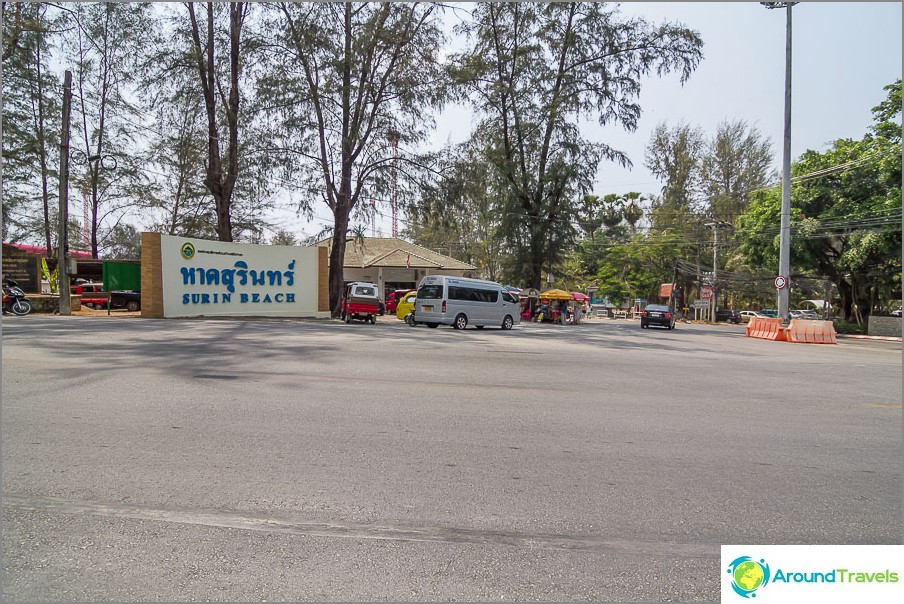