Nai Harn Beach - one of the best in Phuket

Nai Harn can be called a dream binder for its charm and exuberant nature. The beach is located in the southwestern part of Phuket Island, next to the beaches Yanui and Ao Sein. The opinion is subjective, but I would say that Nai Harn is the best beach in Phuket for a longstee. The house will have to be rented on the neighboring Rawae, and you need to rent a transport with a trailer to the house.

The coastline of the beach is flat, a little less than 700 meters long, while a little more than 50 m wide.In the daytime there are sun loungers on the beach, but there are not so many of them as in Patong or Karon. The fact is that Nai Harn attracted not only foreign tourists, but the Thais themselves are not averse to coming here for a family picnic..

Even in the high season, the abundance of vacationers does not irritate the eyes. The Nai Harn area is ideal for resort holidays. There is all the standard set of tourist infrastructure facilities: cafes, restaurants, bars, sports grounds, souvenir shops and exchange offices..

The whole of Nai Harn is surrounded on both sides by palm groves, which only adds coziness and some cinematography to the bay. There is practically no nightlife on the beach, so restless comrades here are frankly bored and leave to look for more active places..

Most of the people vacationing on Nai Harn, people register in one of the few bars located near the beach, and spend their days drinking cocktails and sunsets. Noisy motor boats and jet skis are not particularly crowded on Nai Harn, which has a positive effect on the general atmosphere..

Although the entire beach strip is suitable for swimming in Nai Harn, people usually sit by the sun loungers, concentrated in a couple of specific places on the beach, mainly in the center. The entrance to the water is even, in the autumn-winter months there are practically no waves, so the beach is full of children. The water itself is clean and transparent, and the sand on the beach is fine, warm beige tones.

Monsoons come in late spring and summer, which means frequent rains, storms, waves and dangerous underwater currents. At this time of the year, red flags are constantly displayed on Nai Harn, indicating danger when entering the water. It is best to refrain from bathing, so like rip currents Is a very dangerous thing.

Nai Harn is somewhat reminiscent of the lost lagoon from films about paradise life on tropical islands. Palm trees, a wide strip of sand and lazy transparent waves give you a sense of privacy and tranquility. The sun loungers on the beach are located only in 2-3 rows and stand quite freely from each other, without creating a feeling of overcrowding and discomfort.

The price for renting a sunbed with an umbrella is 100 baht. Right in front of the beach, in a palm grove, there is a small village of bars, restaurants and other buildings, in general - there is more than enough shade here.

Right half of the beach 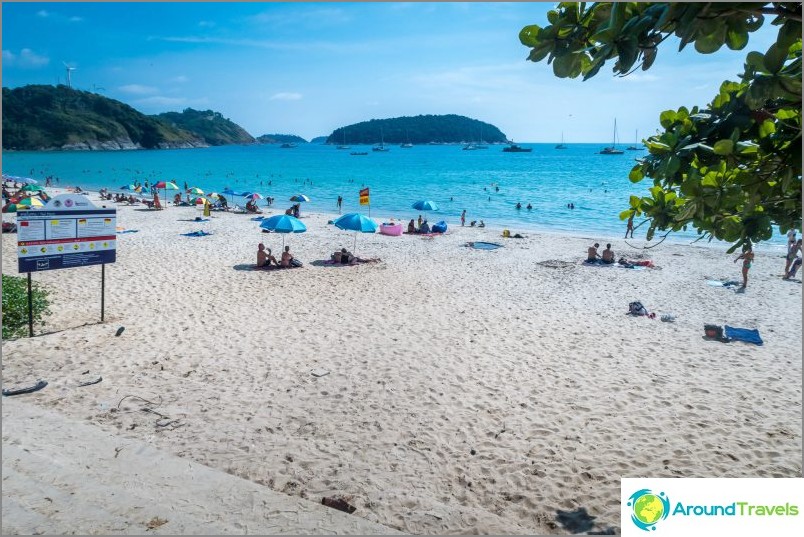 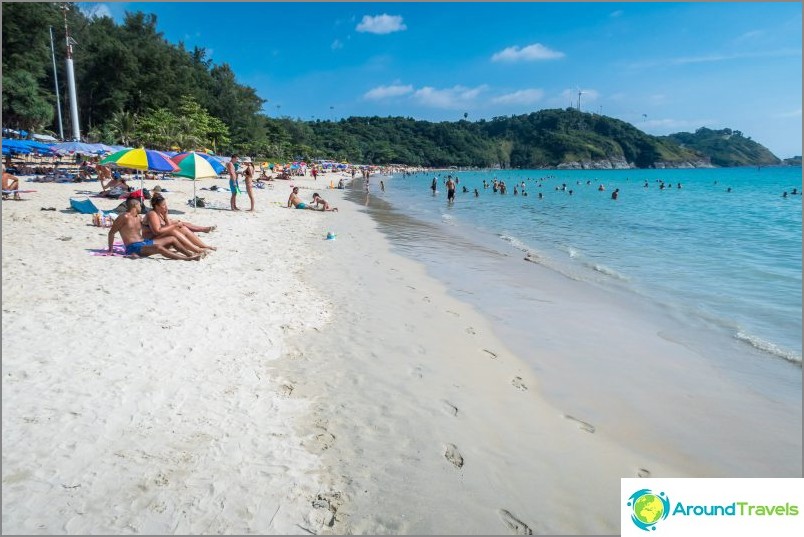 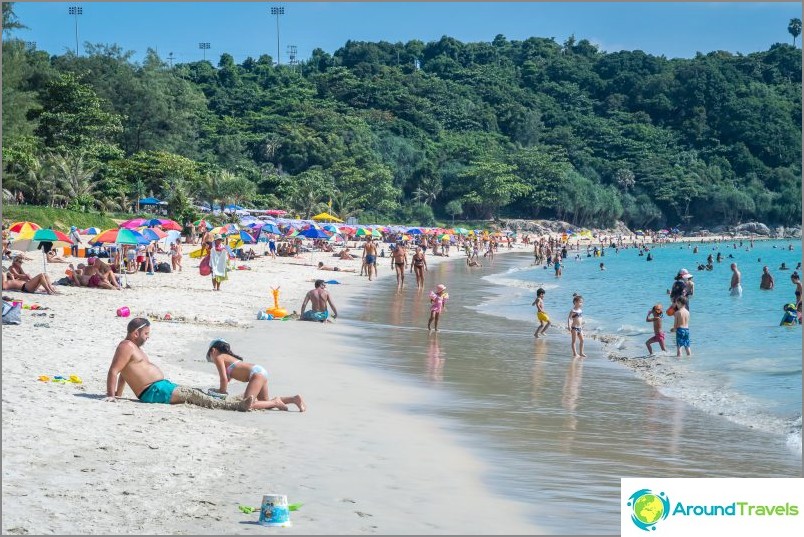 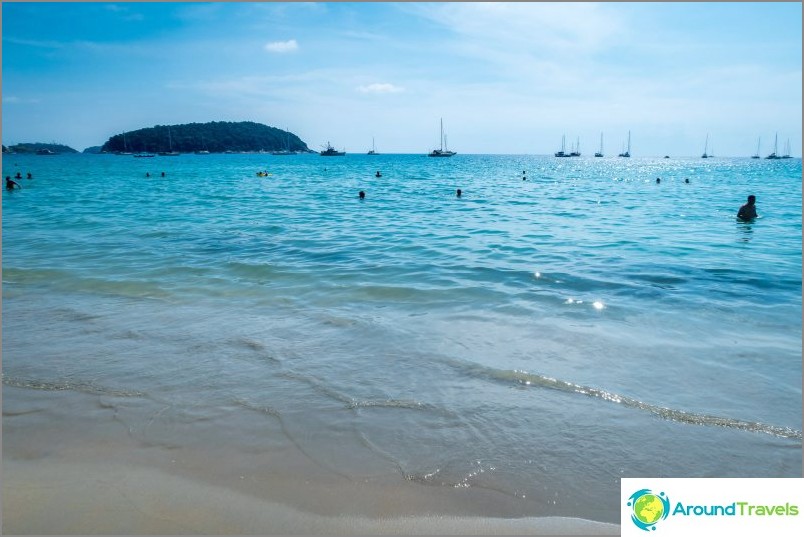 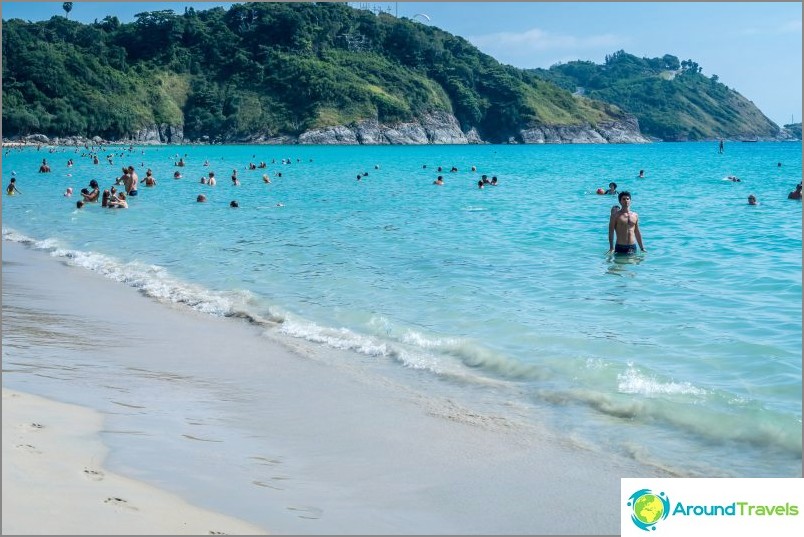 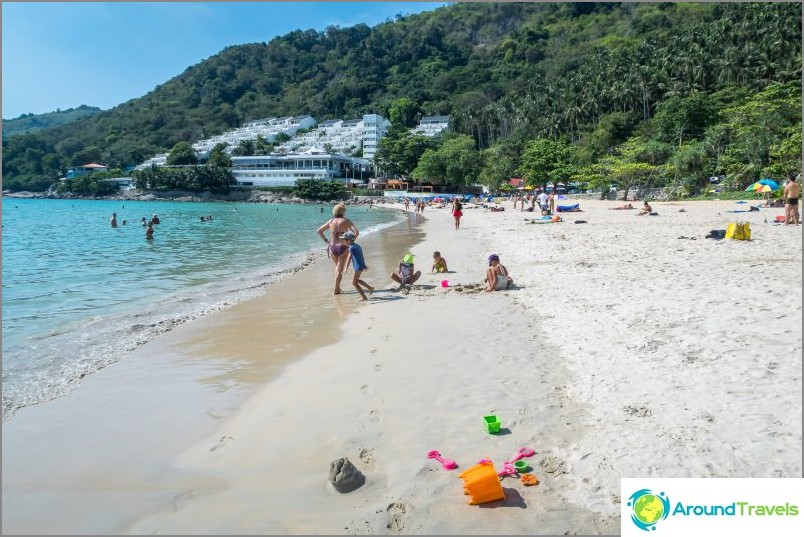 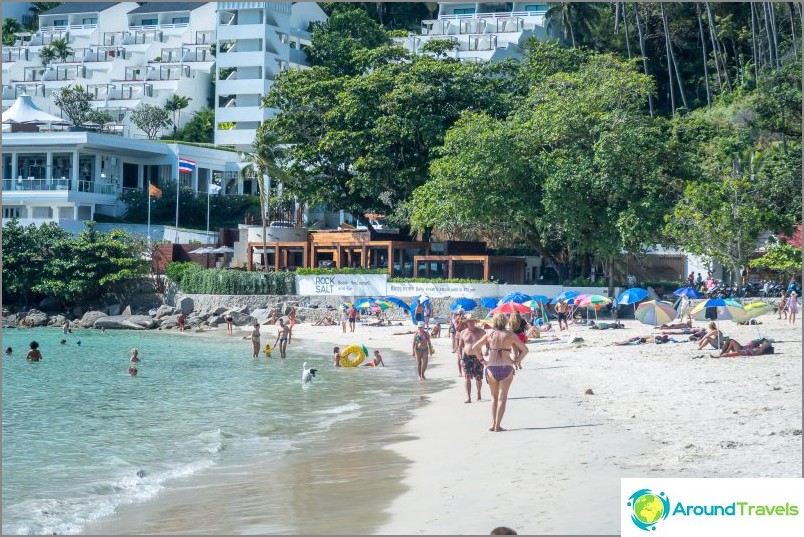 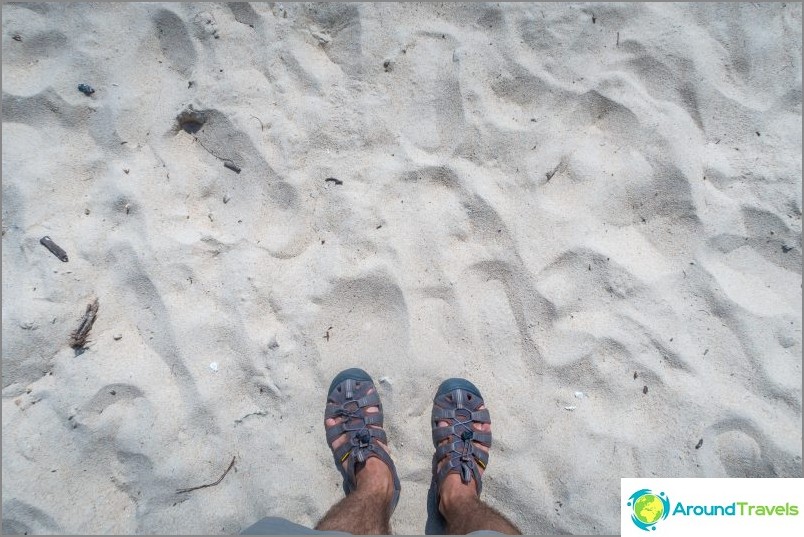 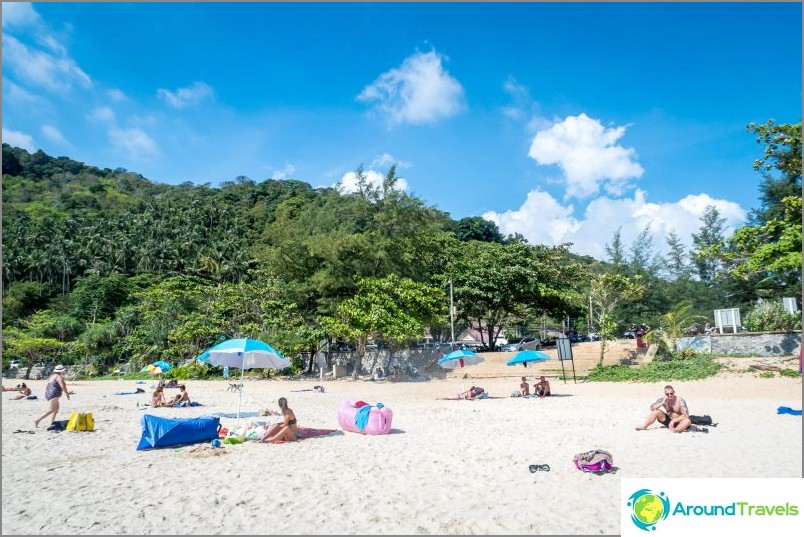 Left half of the beach 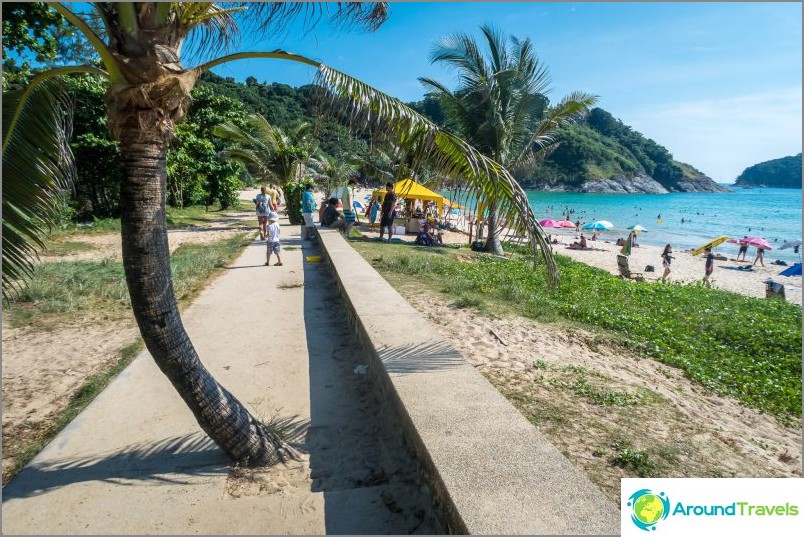 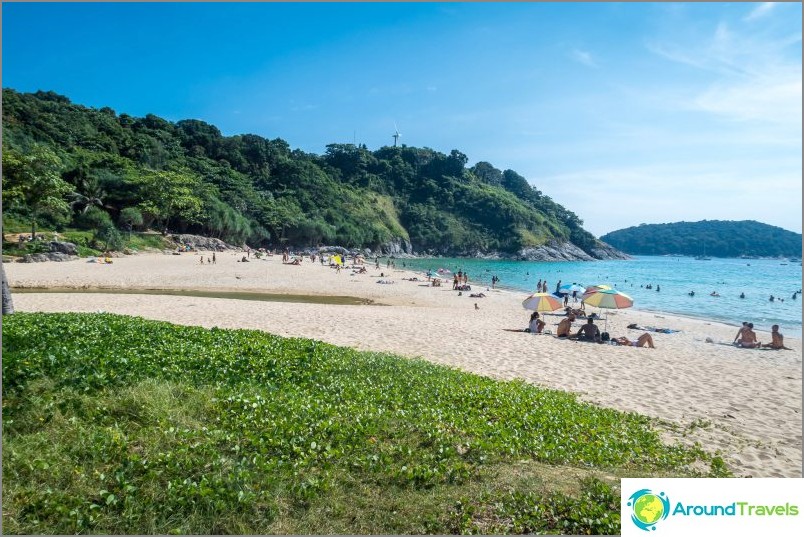 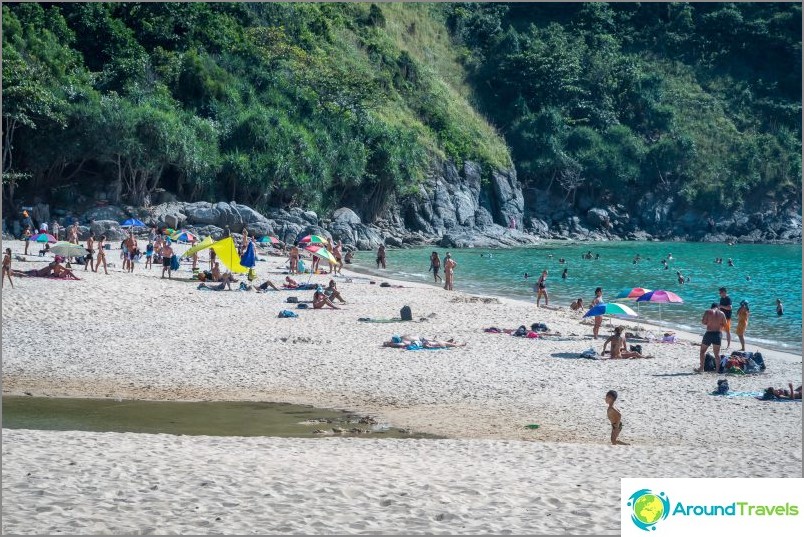 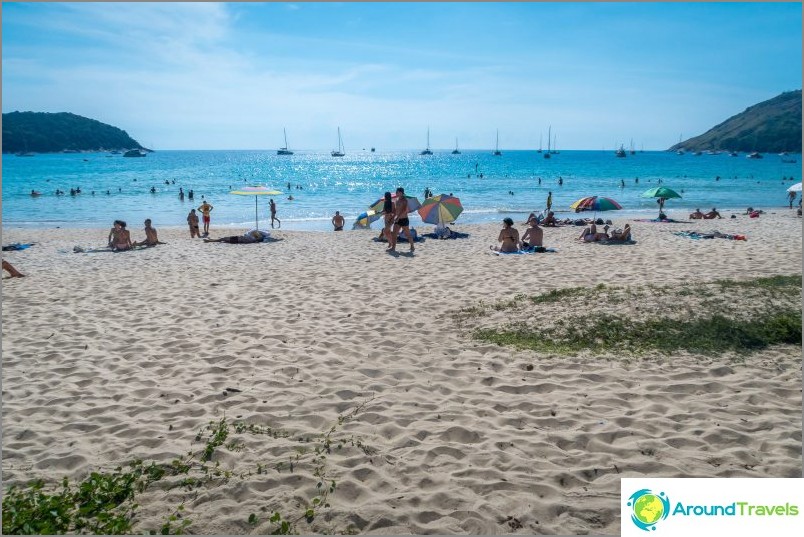 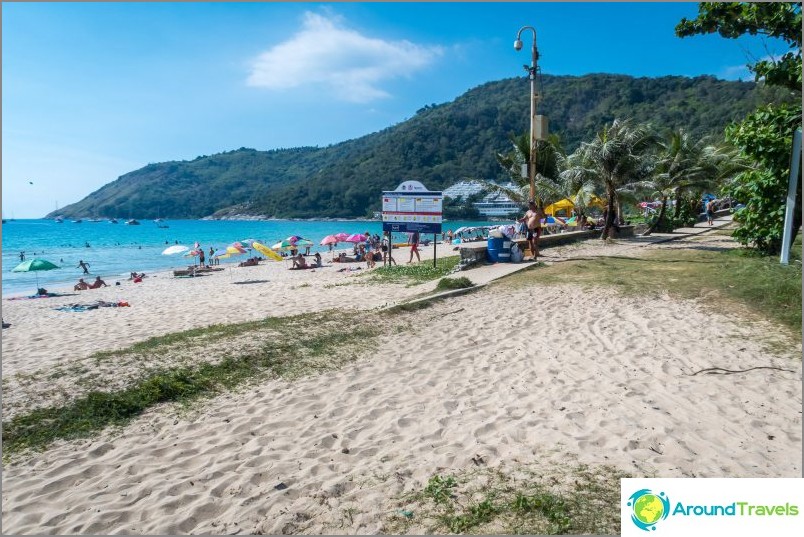 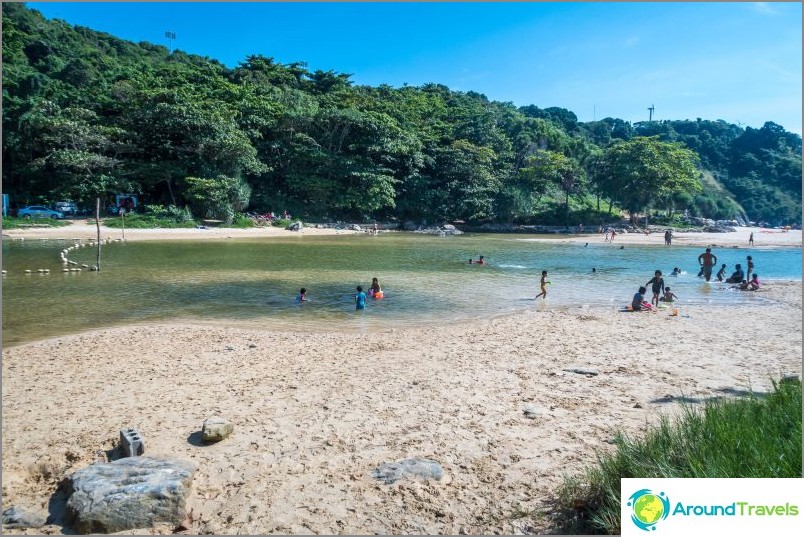 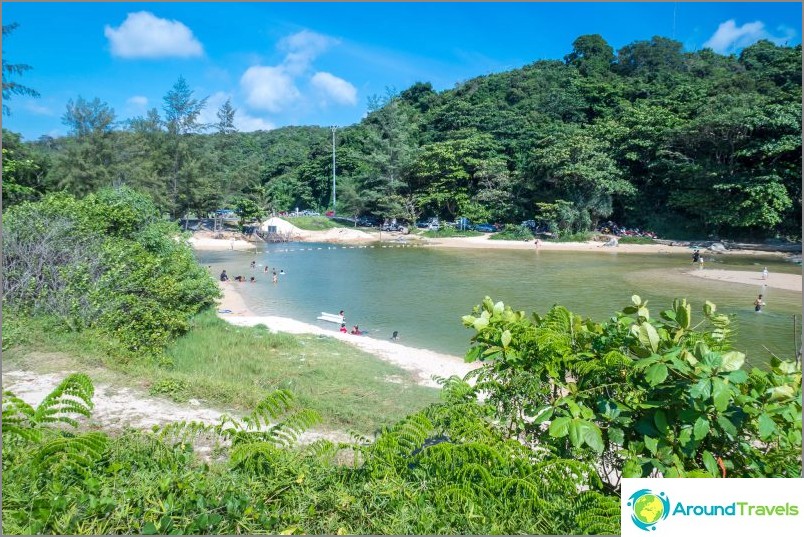 Everything you need for a tourist holiday can be found right on Nai Harn, but the choice is very small. The beach is more likely for a lazy, relaxing holiday, when you really don't need anything and a couple of cafes and a restaurant at the hotel are enough to brighten up your leisure time. If you need something more, you will have to drive to some other place inland.

If you are planning to see the island, then ideally you need to have a rented bike or car on hand. You can snorkel on Nai Harn, although, of course, for a normal snork you need to go somewhere further out to sea and with an excursion.

Surfing is possible during the summer. Due to the fact that the beach is very popular with the Thais themselves, there are no large entertainment establishments here. Locals often come there for picnics with their families and small children, but they don't need all these bars and discos..

There are only a few attractions near the beach: the Buddhist temple-monastery Nai Harn Monastery, Lake Nai Harn (a central place for active sports entertainment) and observation deck Windmill near the windmills, but it will be difficult to get there on foot, since uphill. 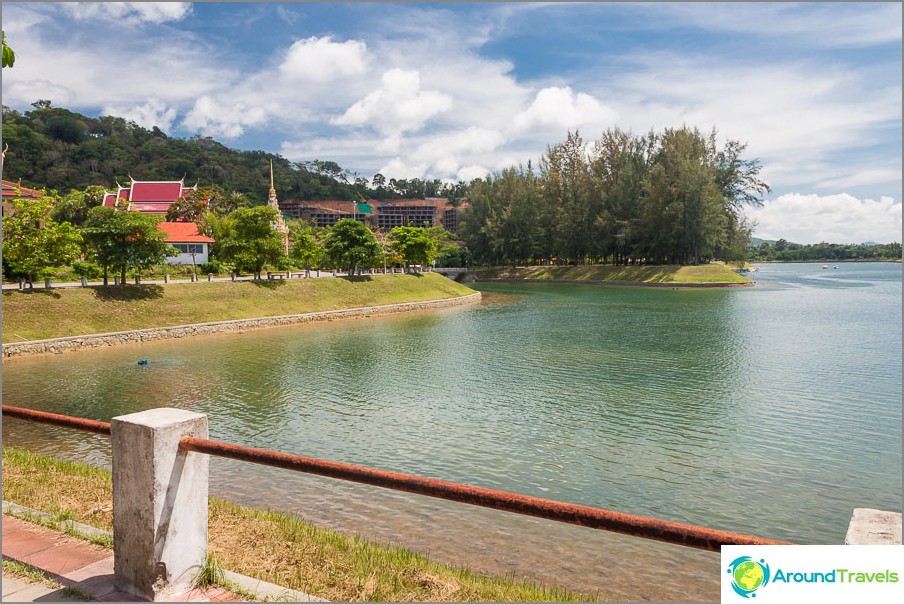 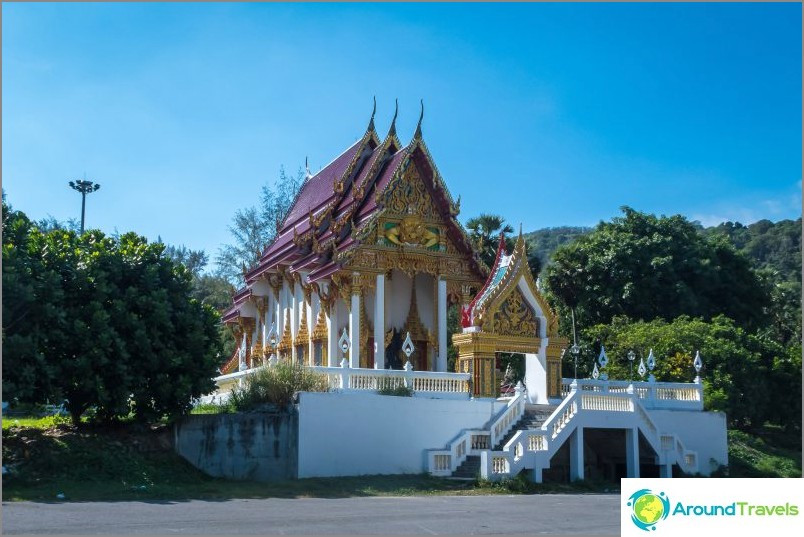 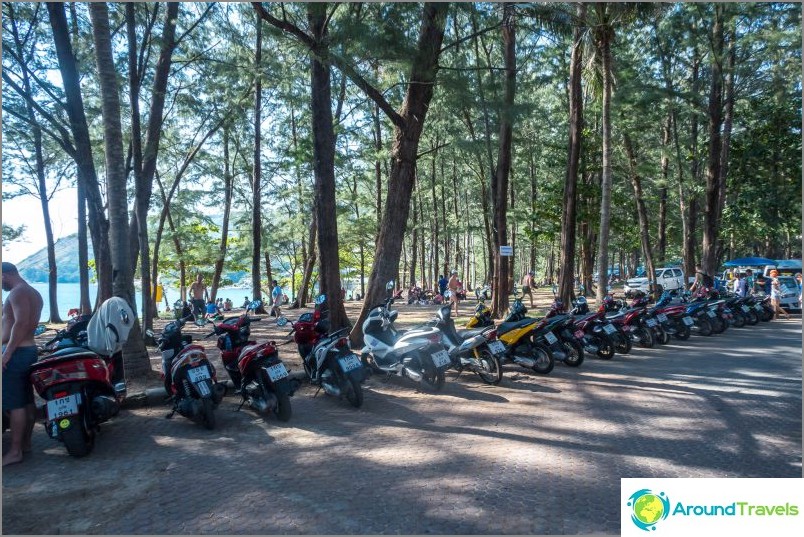 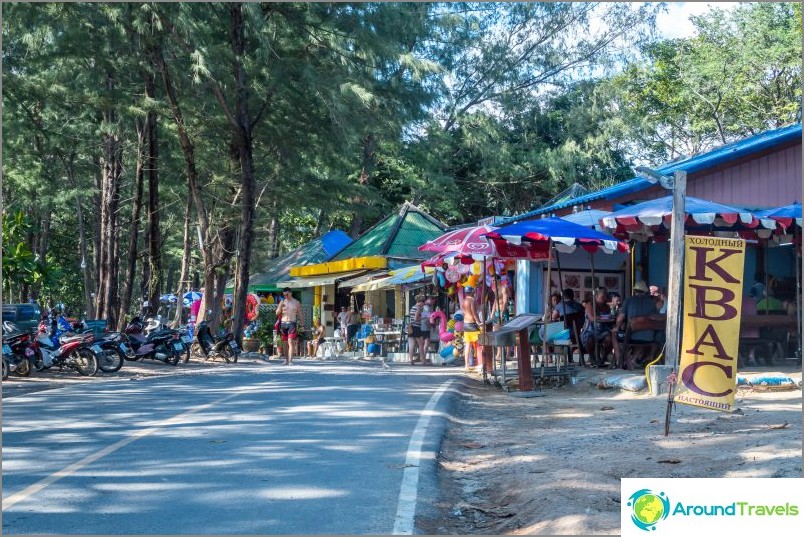 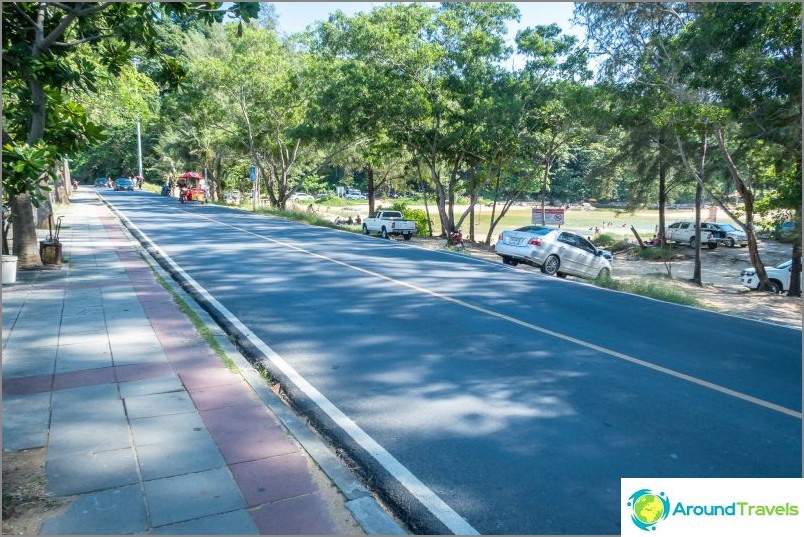 Nai Harn Beach is not very developed in terms of accommodation. Most of the land around the beach belongs to the Buddhist temple Nai Harn, which does not bless the construction of hotels. Therefore, there are only 3 hotels on the beach itself and several villas already in the interior of the island..

The place of their construction is strictly verified and presented in the form of a village. And outside the territory of the Buddhist temple, a large number of hotels have been built for every taste, but the road from them to the beach is about 10 minutes. The price for a hotel room starts from 700 baht per day, and you will have to pay much more for a villa..

The well-known hotel The Nai Harn is located directly on the Nai Harn beach. This is an upscale hotel with the highest levels of comfort. Participants of the royal regatta stop there. Of course, the cost of a room in it is extremely high and starts from 6500 baht per day..

The hotel is well equipped. In addition to comfortable amenities, you can rent a car, order a transfer to Phuket airport or to the city. The second popular hotel is All Seasons Naiharn Phuket Hotel, it is located exactly the same on the very shore. In addition to the above hotels, a little in depth, but also close enough to the coast, there are good hotels with rooms with mountain views: Two Villas Holiday Oxygen Naiharn and Baan Oui .

Just due to the fact that there are few hotels here, which means that there are no packers and tourists, many longsters live here. Yes, they do not live right next to the coast, but 5-15 minutes away by bike. Just all adjacent territories, including areas Rawai and Chalong are rich in housing and in particular houses for rent. We ourselves once lived here.

To get from airport, you will have to take a taxi or rent a car / moto transport, as there is no public transport. There are regular buses from Phuket Town to Nai Harn Beach at a price of 30 baht per ticket. From one of the nearest beaches (Kata, Karon or Yanui) you will also have to go on your own.

If you still decide to get to the beach on your own, then keep in mind there is no direct road to Nai Harn, you will have to turn off the main highway and follow the signs (several turns). You can use the pointer to Promthep Cape as a guide. Since the beach is located almost in the southernmost part of the island, a road passes through it, encircling the southwestern part of Phuket and passing through Nai Harn and Yanui.

That is, if you follow from Patong strictly to the south along the coast, then first there will be Karon beach, then Kata, after which you need to go deeper towards the island to the Nai Harn area (a small town of the same name to the beach), from which follow the signs to the south until you reach the dream beach.